Eleven o’clock is approximately the time that I scared Andrew half to death this evening by wildly slapping my arm and screaming,

I got bit by an ant. So small, yet so painful. It had dug its little pinchers into my skin and was not letting go no matter how many times I slapped it. For some reason I was thinking it was going to be like a mosquito: slap, dead. But it wasn’t. Andrew had to scrape it off and then smash it with his fingers.

This was just a mere minute or so after Andrew had received a bite of his own and, after listening to him freak out about it said, “Oh, did the little ant get you?” in a patronizing baby voice. Why did I have to open my big mouth.

We went back into the kitchen. He had moved all of our food off the fridge and onto the stove and had sprayed the fridge with RAID. The ants were caught in their tracks and died in perfectly straight rows.

They had been filing in from, of all places, an electrical outlet.

“That must be why they hurt so bad! They’re electric ants!” I told Andrew. He asked me if such a thing existed. I told him that I doubted it but that I couldn’t be sure because we don’t have the internet and thus no Google so I couldn’t check. Later on in the evening I moaned, “Ants don’t live in electricity!”

The ants here, however, must feed on electricity. When we were staying with President McCallister Andrew had ants in his laptop constantly. He would open it up and they’d pour out from under the keys.

There were ants here and there around his apartment, but they weren’t into organized crime.
The ants at our apartment have been a bit more aggressive. They march around the apartment like they own the place, making only 90 degree turns. Two lines side by side: one filing in and one filing out. If only Cairo traffic could pick up on that…

From what we knew all the food on the fridge was sealed—the food was on top of the fridge because we hadn’t cleaned out our cupboards yet and they’re gross—but we started to go through it anyway.

The ants seemed to be concentrating on the packages of Oriental noodles (Ramen, for you Utahans) we had purchased at Carrefour (thanks, Jill, for taking us there, btw). The packages of noodles were sealed in a bigger plastic bag, but the ants were inside those, so we opened them up. 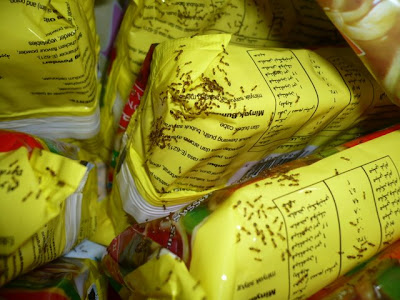 Not knowing if they had the ability to chew through plastic or not, we opened them up and started examining the individual pockets. Ants were spilling out all over the place. We boiled a pot of water and started throwing the packages in the water to kill the ants. Bubbles coming from the packages of noodles led us to believe that there were holes in some of the packages.
Now our noodles were wet and full of dead, semi-dead, and live ants. We ended up throwing most of them away. Our spaghetti noodles were completely sealed (except for one bag that was completely ripped open), so we were able to keep those, and the corn flakes, that were open, were ignored by the ants. Go figure. 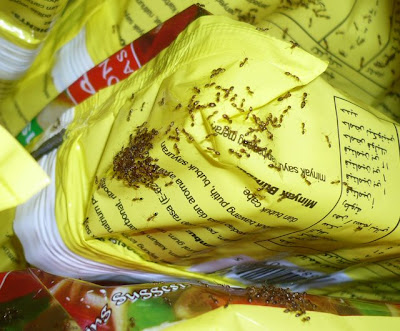 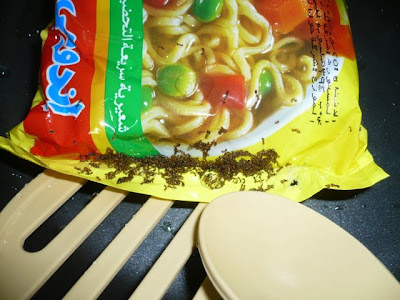 With ants all over the place at varying stages between life and death, we continued to battle them with RAID, fire, boiling water, and sheer brute force. I think most of them are dead now. At least, I hope so.

We found some Tupperware containers left behind in the church cupboards by some previous students (thanks Mark and Aprilee!) and put our corn flakes in one for safe keeping. To lighten the mood in our hot kitchen, I brought one in to Andrew, cracked the lid and quoted from Aladdin,

“Ooh, look at this. I have never seen one of these intact before. This is the famous Dead Sea Tupperware. Listen. Pbbtt! Ah, still fresh!”

I thought it fitting since we were experiencing an Arabian night…I didn’t ever used to think that having the vendor in Aladdin selling Tupperware was very authentic. If I only knew…

This morning we had another ant infestation, but this one was entirely our fault. We were running late for church and didn’t clean up Rachel’s mess before running out the door. When we came home there was a little trail of ants leading from the dining room to a hole in the wall somewhere. We took care of that and thought our problems were over, but alas!

For those of you who know me well, you know that I’m not the best housekeeper. I sometimes put off doing the dishes for too long and let my floor go unswept for much longer than it should…
But seriously, when there are cockroaches on the line I can be downright religious about cleaning house.

We wash our dishes after every meal. I sweep and mop. We don’t leave food out.

Still, we don’t know what to do. And so we turn to you, dear readers, for advice. Lay it on us!

How do we get rid of these ants once and for all without completely fumigating the place?

We’re already planning on investing in more Tupperware containers to hold pretty much any food-like substance and are keeping about as clean as we can, what with a one-year-old on the loose and everything…any ideas?