There are stray cats everywhere. I don’t remember seeing this many cats the last time we were here but I don’t know how I missed them because they are everywhere. In every bush, behind every tree, on every step. Perhaps I’m exaggerating, but not by much.


Most cats are pretty docile, begging for food and then running away. Others are less well tempered and jump out at you, making you run away. Some look decent and others are missing limbs or bits of their ears and tails. Some are even kept as pets. So far I haven’t let Rachel touch any of them, which she wasn’t very happy about at first. She’s fine with just waving at them now and doesn’t cry every time she sees one because she knows that if we walk two more steps we’ll see another one. 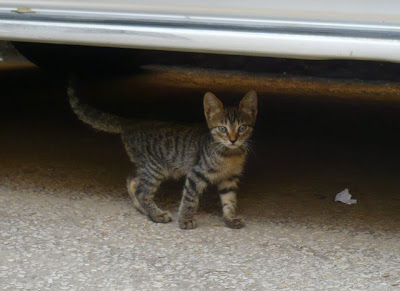 The word for cat in Arabic, “kota,” is very close to the English word for cat, but it still takes me a while to recognize it in Egyptian. We were walking down the street a few days ago, trying to find a specific store, and we kept walking past this older man. We must have passed him 3 or 4 times, at least. He and Rachel made friends and he started up this little game with her. He’d touch her chin and then say,

I couldn’t figure out what he was talking about but thought perhaps he was copying Rachel, who was saying, “Na, na, na…”

After he’d repeated himself several times as we walked back and forth in front of his shop, I realized that he was saying cat. Perhaps he thought that Rachel was meowing. Or maybe he just figured that she likes cats. It may have been that he was just trying to get me used to the Egyptian dialect.

Needless to say, Rachel was very happy on Sunday evening when Auntie Sarah brought her kitty, Athena, to say hi to Rachel on the webcam. Rachel even pet the screen. That was the first cat she’d pet in a whole week!

She had a hard time figuring out how the webcam worked. When we first turned it on, she got down and ran around behind the computer, just to check and see if we weren’t hiding our family back there (which we weren’t). She took everything quite literally.

When Grammy suggested that Rachel crawl through the computer, Rachel tried; she climbed up on Andrew’s lap and put her head on the monitor. She was a little disappointed to learn that she couldn’t actually just do that (but wouldn’t it be nice?). She held her arms out to Auntie Josie and kept poking Grandma’s nose.

We had a good visit with everybody, but it was hard to say goodbye. I almost cried when my mom told me that she had put away the teeter-totter and box of baby toys because, since Rachel is the youngest grandchild on my side of the family, no one is going to be using them for a while. Not for a few years, at least!
Posted by Nancy at 10:29 AM