It's official: we have too much stuff!

Yesterday we took over what we thought was the last of our stuff and reorganized the storage room in Andrew's parents' basement. That whole aisle is full of our stuff--floor to ceiling. How we ever acquired that much stuff, I will never know. The bigger mystery, though, is how we fit it into our apartment in the first place... 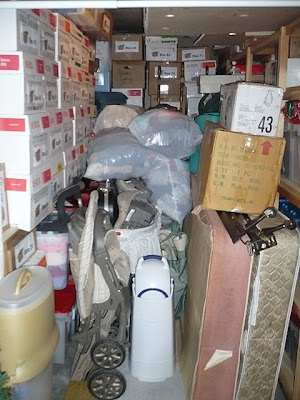 We labeled all of our boxes with numbers and took a [fairly] detailed inventory of the contents for this move. Our stuff will be sitting in storage for 2 years--there's no way we're going to remember how we packed things.

Just when we had put the last of our stuff in here, we realized that we were missing a box that we meant to leave out. We have several boxes of things that need to be "accessible" to our parents, in case of emergency. We had packed it in that mess...somewhere.

We debated for a few minutes about what we should do. Our options were to pull everything out of the aisle, retrieve the box, and put everything back...or...climb back there and get it.

We decided on the latter. Then we had to debate over who should do it. I won the honors because I am lighter and more agile than Andrew is. So away I climbed. 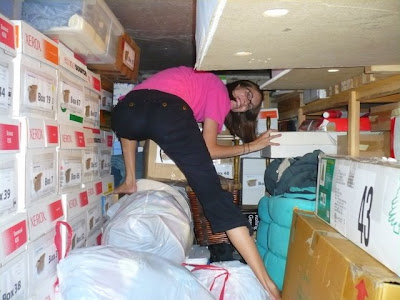 It was actually pretty fun. I stepped on the diaper pail, and then the box spring, and balanced myself on a box. Then I lifted down the two boxes on top of 49, handed 49 back to Andrew, and put the other boxes back.

We're excited to have all our stuff packed away. It's a good thing we finished because we move tomorrow... 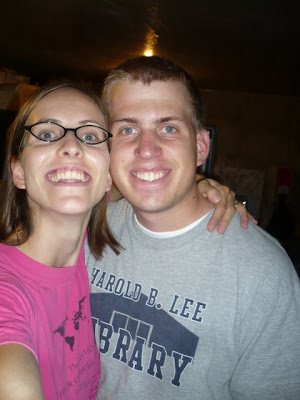 Happy us!
You might notice that I'm sporting a new haircut. I told Andrew it's my Rosie the Riveter haircut. I haven't cut my hair so short in a long time. In a way it's kind of empowering, although I do miss my nice long hair. And, no, it's not a "mom chop." It's more of an "Egypt chop," actually.
Posted by Nancy at 11:00 PM