Walk to the Nile

Yesterday we took a walk to the Nile. Andrew was home in the morning and he looked at me flirtatiously and said,

“Would you like to take a stroll to the Nile, my dear?”

I think he’s been wanting to say that for quite a while now. At least since December. With all the time he’s had to run through the line in his mind, you’d think it would come out sounding a lot cooler and a little less lame than it did. But that’s the way it came out, so I accepted the invitation. After all, it was better than asking me about my scripture marking system.

So, we set off walking. The nice thing about rivers is that they’re relatively easy to find. All we had to do was cross the Metro tracks. Having already passed by the obvious staircase, we hunted around for another one. According to one of our maps, there was a staircase right beside a little shop we frequent. When we got there, however, there wasn’t any sign of a staircase.

Andrew was ready to keep walking on our side of the tracks, so I decided to be the brave, exploratory person of the relationship. We like to flip flop our roles. When I’m not brave, Andrew is. When he’s not, I can be. I kept walking, carrying Rachel. Andrew stayed put.

Just behind the store was a little alleyway and…a set of stairs. I waved at Andrew to follow. He called me his “brave, little wife,” which isn’t much in the way of a compliment, but I have to remember that I’m married to Andrew, so I take what I can get.

We came to a traffic circle with like 5 lanes of cars, at least, all trying to push around the circle and Andrew tried to make me cross the street there. I refused and made him cross the street a little further up where the traffic had thinned out.

After walking for a while longer, we caught our first glimpse of the Nile. It was beautiful, as always. There were a bunch of restaurants hogging the good view, so we walked farther down the shore, passing several felucca docks and getting a beautiful view of the Nile. 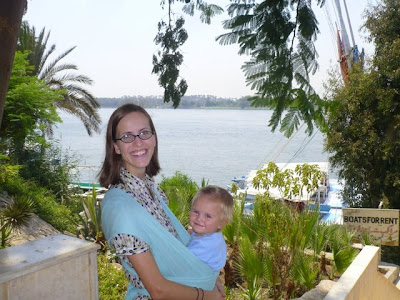 It was there that we met Hanni—the Captain of the Paris—who wanted us to take a felucca ride right then. We talked with him for a little while, and in the end convinced him that we’d come back later. Andrew had to go to school in a few hours, and we’d feel silly being a big felucca with only our small little family. Besides, we weren’t in a haggling mood that morning, as evidenced by the .5 L water bottle that Andrew purchased for 1.5 LE.

Who’d have thought that we’d ever live within walking distance of the Nile? It’s only about a 20 minute walk out our front door. There’s a nice-ish walkway along stretches of the Nile not taken up by hotels and restaurants, where you can look out across the massive river. Rachel wanted to jump right in and swim and was very upset when we didn’t let her. So upset, actually, that she screamed halfway home. 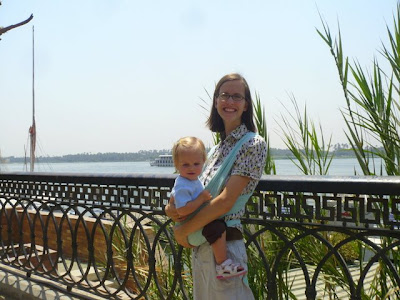 I think we’re entering the “terrible twos” a little early. Rachel has started these terrific tantrums where she screams so long that she doesn’t know what she’s screaming about and, if she happens to be standing up, will throw herself on the ground dramatically and roll around kicking her legs and flailing her arms. It’s great.

And to think she thinks that if she does that she’ll get her own way. Fat chance.

“Oh, yes, Rachel, by all means, throw yourself into the Nile. Since you screamed so politely…”
Posted by Nancy at 12:57 PM