The felucca ride we had planned on going on yesterday ended up being rather inconvenient for everyone involved. One by one, everyone we had invited bailed out on us, so we eventually decided to cancel. There’s a cold of sorts going around, people are battling Pharaoh’s Revenge, it was a school night…need I go on? We’ll have to try another time.

Not knowing what to do, we decided to follow the example of the Sharps and clean our apartment. We’re still not completely unpacked and moved in yet—we’re doing it slowly, as we clean things. Our kitchen is taking a long time because of the roach infestation. Sara got some Borax for us, so we put some of that around, and then, while we were cleaning last night Sister Barton brought by some “Combat” roach traps as a housewarming gift.

That’s one of the benefits of living in a branch, I suppose. You tell one or two people about a problem and the next thing you know, everyone’s taking care of you!

After Sister Barton left, we decided to take a trip downtown. We’d put up most of the pictures we’d brought, but we needed frames for a few more pictures. Even with all our little bits of “home” up on our walls they were still unbearably naked. We decided to find Sobri, a man who sells copies of the facsimiles from the Book of Abraham.

We had a rough idea of where his store is—the Spencers left a map for us with a number of stores circled and his was one of them—and we needed a few more household items (like a laundry basket because no matter how hard I try I always drop an article of clothing or two on the ground while I’m putting the wash out to dry and then they get all covered in dust and have to be washed again) so we set out for Road 9. Yet again.

We ran into a little pack of dogs that really freaked me out. They were barking at everyone and running around the street. I panicked, jumped behind Andrew, and grabbed onto his shirt. I knew the only way I’d keep walking was if he was pulling me along. (Have I mentioned that I can’t stand dogs? Rachel can’t, either. She cries when we’re inside and she hears them barking outside).

A nice Egyptian man on a bicycle saw my embarrassing display of cowardice and yelled at the dogs.

“Halas!” he yelled at them.

Somehow he was able to get control of them and he waved us on, holding the dogs off. I thought it was very nice of him to notice how terrified I was and to do something about it.

Our first stop was our favorite store—Moudy’s. They have everything there. We got a laundry basket, some hand towels and a few other essentials. We forgot a vegetable peeler. Yet again.

Then we set out to find Sobri’s. We had no idea what his store was called, but there’s a little trinket store across from Moudy’s. I suggested that this was Sobri’s store, but Andrew said it was too far down Road 9. After wandering around for a while and seeing nothing we ended up back at Moudy’s.

I convinced Andrew to ask the man at the trinket shop if he knew where Sobri was. He had some papyrus on display in his window so chances were that he’d know other papyrus sellers.

“I’m looking for a man called Sobri.” Andrew told the man (in Arabic), “Do you know him?”

Much to his surprise, the man burst out laughing.

He took Andrew back to some drawers and pulled out the facsimiles. Aside from the fact that Andrew was wearing a BYU t-shirt, I’m not sure how Sobri knew we were LDS or that we were looking for the facsimiles. We ended up getting the “1 in 3” (three separate sheets of papyrus, each with one facsimile on it), all three for 50 LE (the “3 in 1” sells for the 35 LE). That’s a much better bargain than the papyrus we bought down in Luxor a couple of years ago. 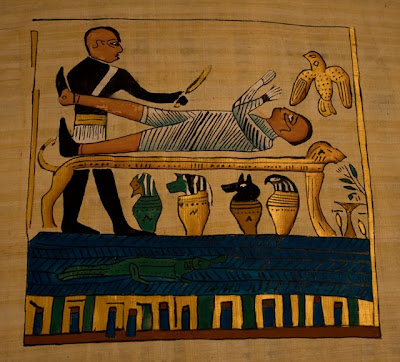 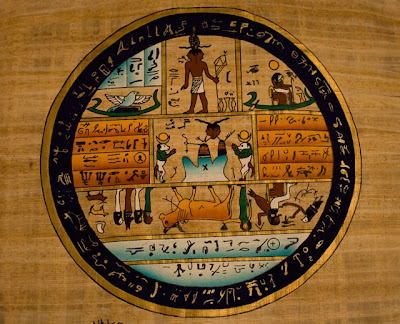 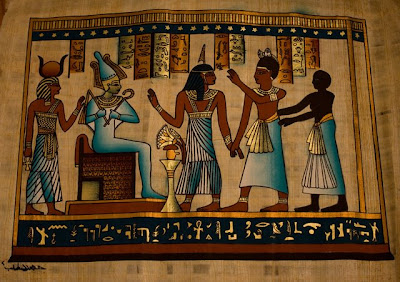 I suppose Sobri’s shop is less of a tourist trap than the shop we visited, and Sobri has a pretty steady stream of customers looking for the facsimiles. He definitely found himself a lucrative business niche.

So, now we’re 50 LE poorer, but our walls look a little less lonely. And we still had plenty of time left in the evening to keep working on our kitchen. We set up the cockroach traps, cleaned out another set of cupboards so that we get our dishes off our couch, and even managed to play a stellar game of Scrabble before calling it a night. I kicked Andrew’s trash (yet again).