I made the mistake of packing a squishy, heart-shaped toy in the diaper bag yesterday. When Rachel found it she immediately lifted it up into ball-throwing position: arm up directly above her head, cocked and ready to fire. 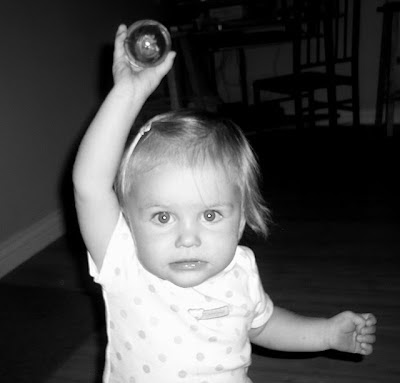 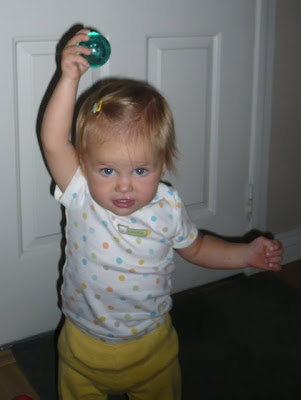 We were in church, so I tried desperately to convince her that it wasn't a ball.

"It's not a ball, Rachel. It's a squishy thing. See? You just squish it, like this," I showed her how to squish it.

She would not be swayed. She took it back and raised it above her head again, threatening to lob it across the room. Eventually I stopped trying telling her that it wasn't a ball and moved onto my next tactic to keep her on good behavior--telling her not to throw the ball.

"Don't throw the ball, Rachel," I whispered, shaking my head.

Not only had I failed in convincing her that it wasn't a ball, she now had me calling it a ball. Obviously she is more strong-willed than I.

Rachel continued to hold the ball up in the air while shaking her head. She's an excellent copycat.

"Don't throw it," I whispered again, snatching at it.

She moved it away from my reach, then turned to face the rest of the Sunday School.

We were sitting near the back and Rachel had the full attention of several grandparents. She loves a good audience.

She held the ball up as high as she could and yelled,

Then she threw it. Several stiffled snickers came from nearby seats.

At least that gave me time to retrieve it before she could get to it again. We spent the rest of Sunday School hiding the ball from Rachel. It was nice that she wanted to entertain herself by entertaining half the grandparents in the ward, but I just don't think that balls need to be thrown all over the Relief Society room.

What was more exciting, though, is that she said ball. She's starting to associated sounds with objects, so for a few weeks she's been saying, "B, B, B," for books and balls. We were happily shocked that she had said ball so clearly!

That's not the first word she's said, though. She can say 'mama,' 'dada,' 'bye-bye,' 'hi,' 'no,' 'yes,' and now 'ball' in English, although she never uses them consistently, and never on demand. She is also working on her Arabic.

She has a bunch of little board books that we picked up when we were living in Jordan and she likes to read them a lot. They're just the right size for her tiny little hands. Her favorite one is the one about families because there is a picture of a baby in the back. We've read it so many times that she doesn't even try to compensate for the backwardness of Arabic by flipping the book upside down (she used to find reading right to left rather distressing); she knows exactly which way this book is supposed to be read and will open it "backwards" without hesitation.

She kisses each family member as they are introduced: ab (father), um (mother), ack (brother), ucht (sister), ana (me). Then we get to her favorite page--the one with the baby.

We were reading it earlier this week and Rachel was going through her usual kissing routine--we have to wipe the book off before we can put it away.

"Tifla," I read when we got to the baby page. The baby is in pink, so we think it's a girl baby. Thus tifla and not tifl.

Usually Rachel just kisses the baby and then opens the book up at the beginning again, but this time around she paused before kissing the baby.

"Tifla," she repeated tenderly, pointing to the baby. Then she gave it a big, wet kiss.

It will be interesting to see how she develops her language skills.
Posted by Nancy at 1:23 PM