All three occasions took a good amount of bravery on my part, I think. I was terrified of living in the Middle East on the first two occasions, and so even thinking about going outside without Andrew was traumatic. And after Rachel was born, I was so sore I could hardly sit down, let around walk, so braving the stairs was difficult.

Well, today, Rachel and I went for a little discovery walk while Andrew was at school. It didn’t take nearly as much guts as going outside in Amman did—perhaps because I can hide behind Rachel here. I know people are staring, but I can pretend that they’re just staring at her (which they probably are).

Yesterday night I made wonderful plans to take the Metro into downtown with Andrew in the morning and walk Rachel to the aquarium…however, Rachel decided to wake up at 2 AM and scream for an eternity, so instead we ended up sleeping in and lazing about all morning. And I do mean all morning. 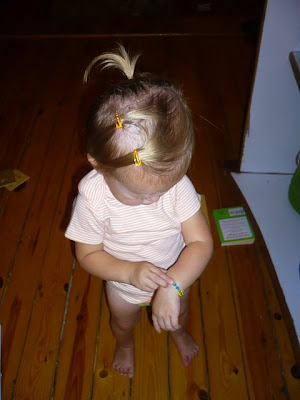 Rachel's hairdo for the day

Instead of that grand adventure—which would have required riding the Metro alone—we just went for a little walk to Road 9. Rachel’s been a little bored lately and I just figured out that it’s probably because we left the majority of her toys at home. She has a little set of blocks from Ikea, a stacking tower, finger puppets, books, books, books, and several random little things that we could fit in the suitcase. But there’s nothing “task-oriented” to take up her time.

So we went on a little shopping spree to that little store we like. I should probably learn the name of it someday so that I can tell you what it is. On the way Rachel played on some newly manicured lawns, and we stopped at some interesting trees. 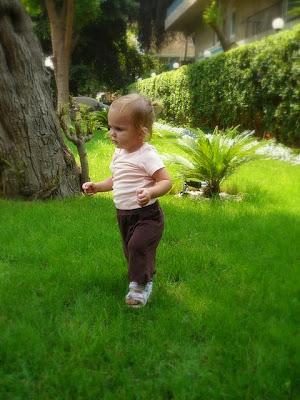 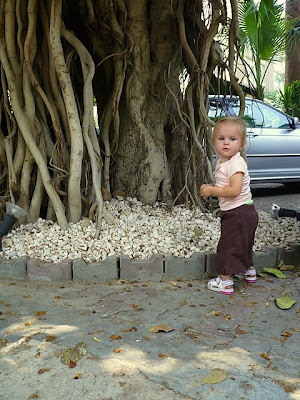 We looked at a lot of toys at the store. Rachel wanted to buy a game of UNO, but I told her to put it back because it wasn’t a baby toy. This made for a lovely temper tantrum. Quite an embarrassing one, really, because all the workers in the store—all of them male—ran over and crooned to Rachel about this and that, trying to make her happy. I have no idea what they were saying, but it didn’t work and Rachel continued to scream and make a fool of herself on the floor while I rolled my eyes and tried to maintain my patience.

Finally, her temper subsided and we were able to choose one puzzle with zoo animals and a push train. Hopefully these will help to keep Rachel entertained a little better.

We met up with Daddy on his way home from school, and he was able to fill me in on all the latest gossip. He’s been checking my email for me…

So congratulations to Michelle and Andy on baby boy Robinson. You should name him Robby. Just kidding…but if you still haven’t named him by the time I get to a computer with internet, I’ll try to give some real suggestions. And congratulations to Marquita and Daniel for having #2 on the way!

PS. Esther, Robby is a fine name. I just think Robby Robinson would be a silly name.
Posted by Nancy at 2:41 PM