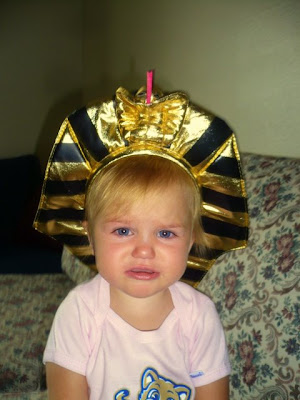 Rachel is afraid of hats. She doesn't like baseball caps or sunbonnets, mortar boards or tuques.

Since many men in Egypt will be wearing keffiyehs and even more of the women will be wearing headscarves, Rachel will simply have to get used to the idea that hats are not actually scary.

We know that she certainly doesn't like keffiyehs! Grandpa wore one in Grover and Rachel just about had a panic attack! (I will post a picture of this later. Andrew was supposed to write about it and Calf Creek, but he didn't...) So instead I started her off a little slower by wearing a headscarf in front of her. She didn't react too negatively until I tried to put one on her! 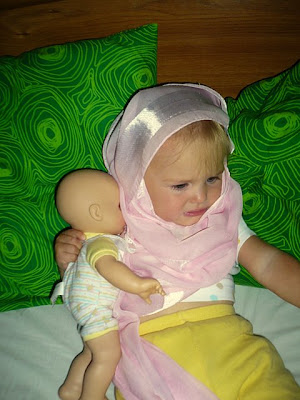 She won't have to wear one, so I suppose it's alright that she doesn't like them. Just as long as she's comfortable seeing other people in them. We still have to work on that keffiyeh thing, though.
Posted by Nancy at 10:20 PM