The ladies in the Stonewood Stake Primary Presidency came to see us off on Sunday afternoon. I've loved working with these ladies; I've learned so much from them! I'm kind of sad to leave my calling, but I'm sure that there's a new one waiting for me in the Cairo Branch.

I'm glad that they came over, but I'm not happy about how my house looked when they did! We had everything spread all over the living room and were trying to decide how best to shove the mess into our suitcases. Yikes! 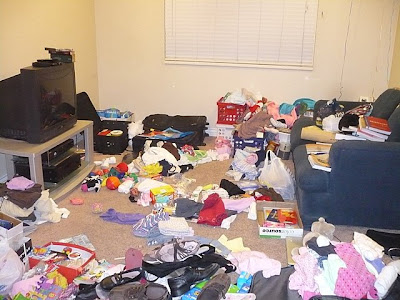 They said they understood...but doesn't that just look awful? It makes me feel happy about the times when my house is "messy" because it's never this messy! Except for Sunday afternoons when the Stake Primary Presidency comes to visit! 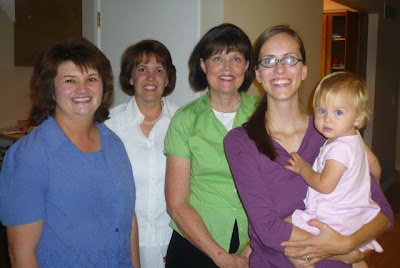 Kris Baxter, Angela Bates, Janet Gurney, Me and Rachel
I love how we're all wearing pretty jewel tones. It looks like we planned the picture. I also love how Rachel is pulling my shirt down. She decided that it was time to eat just then.

Rachel was in the picture because she's the 3rd councilor in the presidency. Her duties mainly revolved around timing our meetings and providing plenty of entertainment. She would play nicely on the floor during our meetings until time was "up" and then we'd quickly end our meeting and go home. Rachel was never afraid to let us know when we were running overtime.

I also had the opportunity to serve with Kristin Sampson and Bonnie Zundel. Both were released for different callings--Kristin is the Stake Relief Society President and Bonnie went into Young Womens in her ward. So Janet and I were the only "originals" left from when they reorganized the stake back in September of 2006 (I wasn't called until November). I can't believe I've been in this calling for almost two years!

I'll miss visiting with all the primary children and presidencies. At least our ward primary is fairly small so I won't go into shock when we move into a branch!
Posted by Nancy at 10:21 PM