Rachel has taken to waving. Constantly. Of course, she has always been a bit of a waver, but now this trait is even more pronounced. She waves to everyone she sees. Sometimes she waves to know one at all—trees, cats, dogs, cars, and buildings also get waved to. Most of the time people will wave back. She’d make a great rodeo queen.

As a general rule, Arabs love children, and with Rachel being “yellow” haired, she gets double attention. Guards with machine guns croon, old men without teeth swoon, and ladies vie for a glance or wave from Rachel.

At first she was a little wary of the extra attention. The first time we met the bowab at the church, Hussein, she cried and hid her face on my shoulder.

He wasn’t really offended that she didn’t want to be friends. Just a little disappointed. And I'm not sure his assessment of her fears was correct, either, since we have several "dark skinned, black haired" people in our ward in Orem and she does just fine with them.

When we went over there today, though, he had his two children and wife with him. His daughter got hit by a car and broke her leg, so she has to come to the doctor every 15 days. His family lives way out in the desert, beyond the pyramids (from what I understand) and he rarely sees them, except now, because of the broken leg ordeal.

After talking with him outside for a while, he invited us inside to meet his wife and his son, Shehab, who happens to be 1 year and 1 month old, just like Rachel.

Rachel got so excited to see his son, which made him very excited. Rachel even went to his wife in order to get to his son and that made him even more excited. It was pretty exciting, I suppose, since that was the first Egyptian she went to willingly. 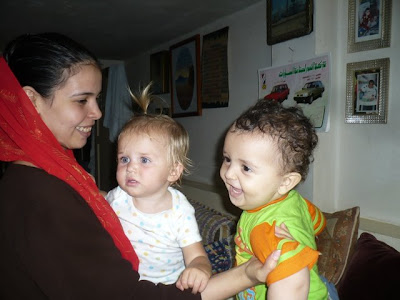 Mom, take me back!
“Oh! She is afraid of Egyptians no more!” he exclaimed, “She does not think we are scary!”
“We are no scary,” he assured Rachel, pinching her cheek.

She’s endured a lot of cheek pinching recently. And not just a gentle little squeeze, either. It’s like they grab her whole cheek and tug on it. Let’s just say I’m glad I’m not a baby!

• Wave and say “Hi,” “Bye,” or “Amore” to her
• Try to make her give them a high five
• Blow kisses, which she’ll respond to with gusto
• Touch her yellow hair
• Stroke her cheek, which is much better than pinching it

She also gets a lot of free stuff. She got a pretty pink washcloth at the store we bought our sheets, pillows, and towels at today.

And he shoved it into our shopping bag after we’d paid and were headed out the door, all the while smiling and waving to Rachel.

She was being rather cute at his store, playing hide-and-seek with a little boy. He’d run around the store and she’d go and find him, which made me a little nervous because they were playing both in and outside the store. At one point he was hiding outside and she was following him out. When she poked her head out of the doorway, she waved and said, “Hi!”

Yesterday she got a free pastry from the grocery store. She was starving, which is why we were going shopping in the first place, and she wanted everything in sight. When we walked past the bakery she got particularly excited and started pointing to some pastries and singing, “Na, na, na, na, na,” while licking her hands.

The staffer picked up a pastry and handed it to Rachel. He said something in Arabic and then translated it for me,

I called Andrew over to pay for it since I haven’t gotten in the habit of carrying around my wallet yet. The staffer wouldn’t let us pay. I always knew Rachel was a mooch, but mooching food off of store shelves is almost unheard of. The girl has talent.

So, Rachel has, obviously, been enjoying herself so far. She’ll continue to wave at everyone, thinking she’s so cute, while she is taught that she deserves baksheesh for being, well, cute.
Posted by Nancy at 4:05 PM