Olympic Packers, we are

If suitcase packing were an Olympic event, we'd for sure earn gold.

We started training about a month ago, setting aside things we thought we'd like to take. Then about a week ago we got really serious, actually putting things in suitcases and weighing things.

We would weigh ourselves on a bathroom scale and then get back on holding a suitcase. That proved rather inaccurate, but it gave us a general idea of how much stuff we had waiting to be packed. First we were using Andrew to hold the suitcases while I bent over and looked at the number, but then we switched roles. I'm now just over 100 lbs. (yahoo! I'm not in the 90s anymore!) so it was easier to tell if we had reached 50 lbs. or not. With Andrew we kept messing up our math.

A few weeks ago we had decided to just eat the $155 fee for an extra bag. On Sunday we decided to eat the $310 fee for two extra bags. Have you ever tried to cram your life into 100 lbs.? Babies require a lot of stuff--and we're going for two years...

So we had way too much stuff. We began to feel like pioneers. We opened up our suitcases, dumped them on the floor, and started weeding through our stuff, taking only what was absolutely essential. I don't know why I feel so hard done by since we're each taking 100 lbs. and the pioneers could only take 15 lbs.

After packing and weighing and repacking and weighing several times, with the world record line chasing us all the way, we decided it was time to invest in a luggage scale. We were going for accuracy and a luggage scale is far more accurate than trying to balance on a bathroom scale holding something half your weight. Plus, Radio Shack sells them for like $2. Awesome. 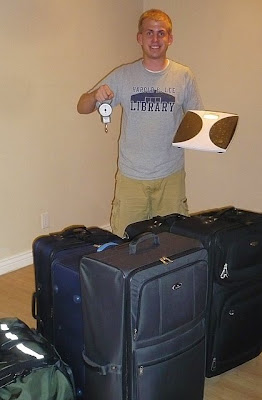 And so, with 11 hours to go, we are completely packed up and have loaded our suitcases into the van. We're both feeling relaxed and excited and nervous and sad and anxious and happy and afraid. I suppose that's how most Olympians feel. 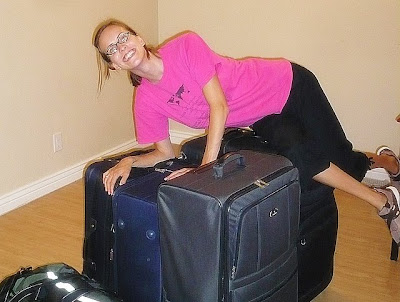