We went on a picnic to the park for dinner. Our house was in the seventies all day until right around 4:00 when it shot up into the mid-eighties. I don't know why. The only way to make our house seem bearable was to get out of it into the even hotter outdoors—that way when we came home it would feel cool again. We haven't switched over to the air conditioner yet because just last week the temperature was in the forties during the day (dropping into the twenties at night).

I checked today's weather almanac and the historical high for today ranges between 43 and 94 degrees.

Spring is obviously as spastic out here as it is other places (Alberta, Utah? I'm looking at you) so it kind of makes sense that the pool doesn't open until the middle of May. Andrew's on the HOA board and suggested that we open it in April but folks seemed aghast. "Do you want to freeze?" they asked.

I would just like to point out that we hit 90 degrees today. And it's supposed to cool off into the 60s tonight. I'm kind of assuming that at this point my risk of freezing is fairly low. And I'm fine with that because I love summer. But seriously...open the pool!

Unfortunately, they've schedule the maintenance for the pool the last couple weeks of April so there's no hope of it opening early. But I really think they should consider it.

We had fun at the park, anyway, even if we did all end up red-faced and sweaty.

My kids are swingers so we did plenty of that. Rachel helped me push Miriam and Benjamin for a while. 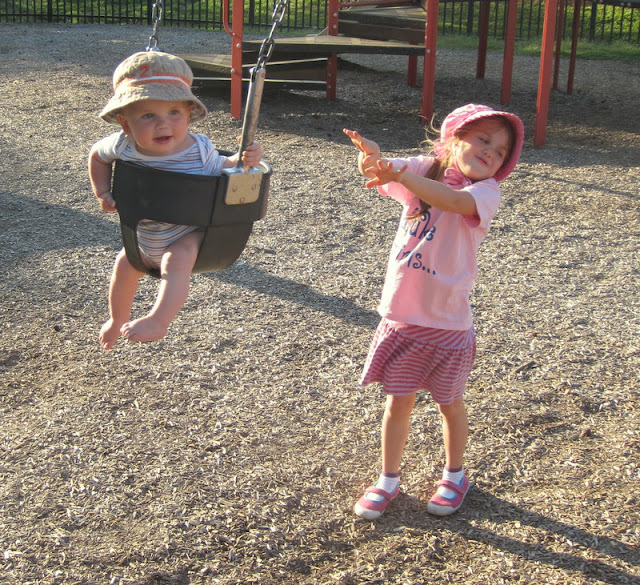 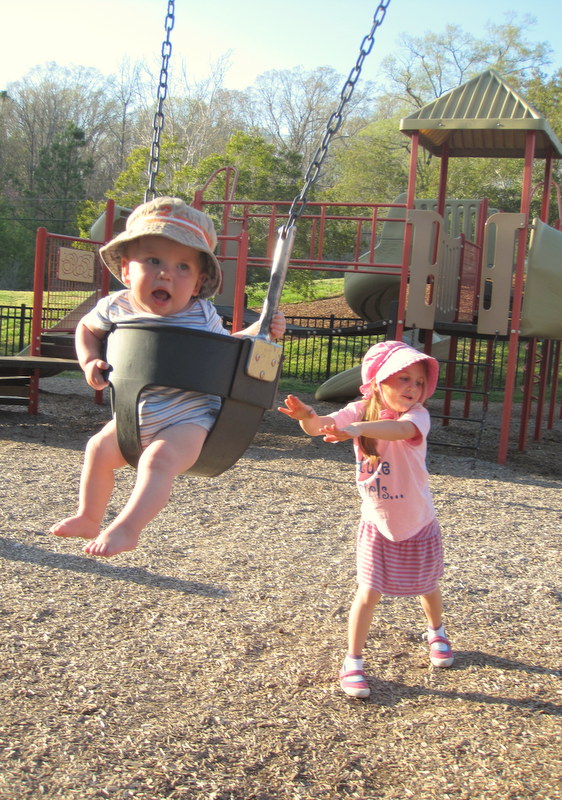 She wasn't originally wearing that shirt today. She had a purple shirt on instead, but she was holding Benjamin while I was getting the stroller set up and he did a great big poopy that he'd been storing up all day long and it leaked all over the place. I didn't even notice that it got on her shirt until after I'd cleaned him up.

"Okay, Rachel," I prepped her. "I'm going to tell you something, but I need you to not freak out."

She doesn't like bodily fluids. She gags when Benjamin spits up (and he spits up a lot).

"It's just that whenever he spits up I feel like I'm going to throw up," she explained to me once.

Considering she's my most throw-uppy child (Benjamin's rank is yet to be determined (he's doing a lot better recently)) this doesn't seem quite right. Shouldn't she be used to throw up being everywhere?

Just the other day Rachel was sitting on the couch with Benjamin on her lap doing the horsey-ride game with him, which involved a bit of jostling. Naturally, this caused him to spit up a bit. She flipped out and pushed him off her lap and onto the floor.

"What's more important?" I asked her. "Wiping spit-up off your clothes or making sure you put your brother down carefully?"

"Putting my brother down carefully," she mumbled back.

Anyway, she kind of freaked out about the shirt but I was able to help her get it off without too much hassle. At the park, I noticed that she had a big smear of dried baby poop caked to her skirt. I didn't tell her it was there.

That's how etiquette works, right? You only tell someone something's wrong with their appearance if they can do something about it right then. Otherwise, you just let them discover it when they get home because if you tell someone, for example, that they have streaks of dried baby poop on their skirt while they're at a park with nothing else to change into, they'll just fret over the poop the whole time instead of having fun. Telling them their shoelace is untied, on the other hand, is fine because that's completely easy to remedy on the spot.

Anyway, isn't he too cute for words? 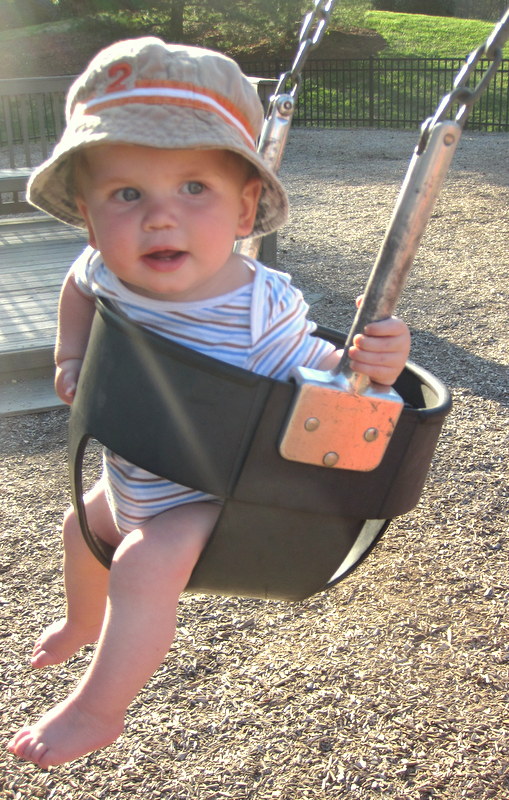 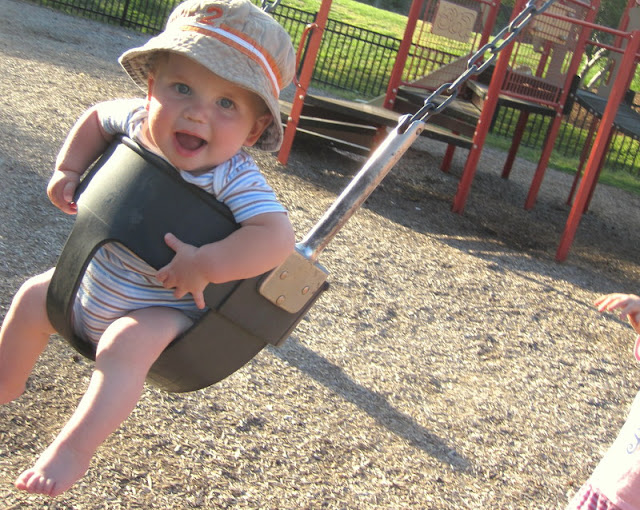 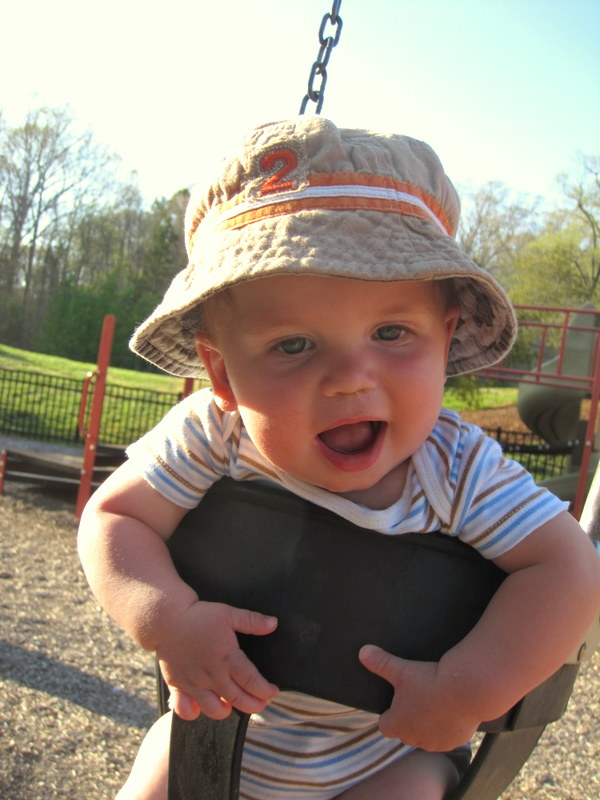 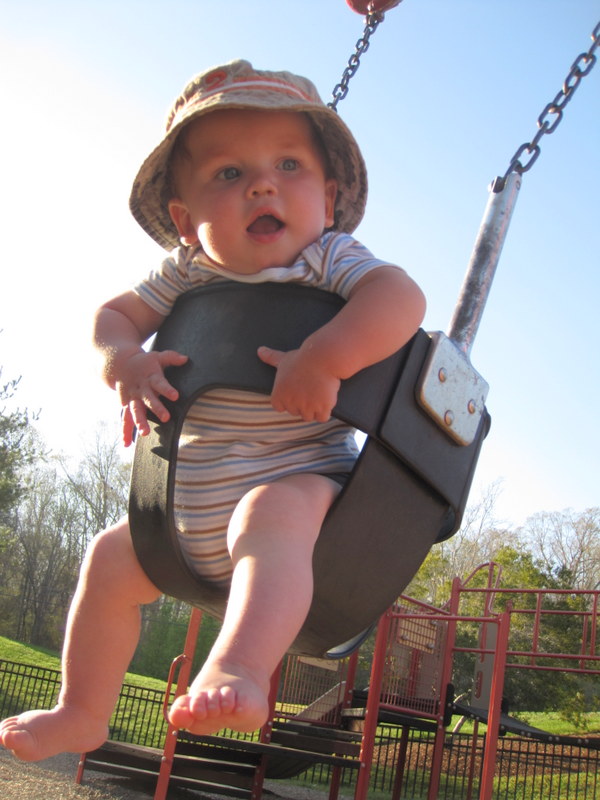 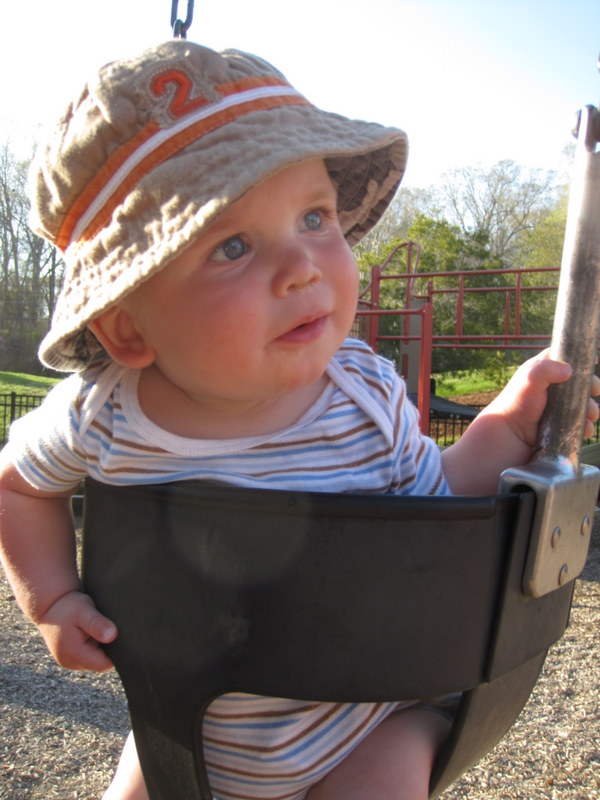 Miriam was working on her pointe feet while she was swinging. She loves ballet so much. She kept watching her shadow, declaring, "This is just how the pointe fairies look!" 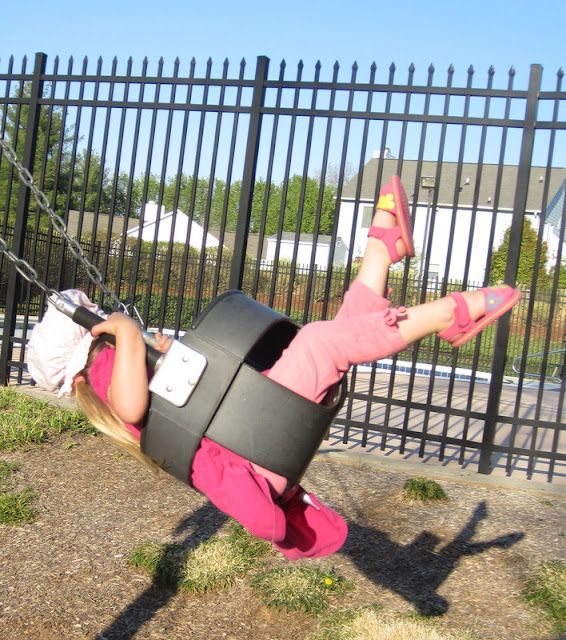 Rachel can get a little wild with the swinging... 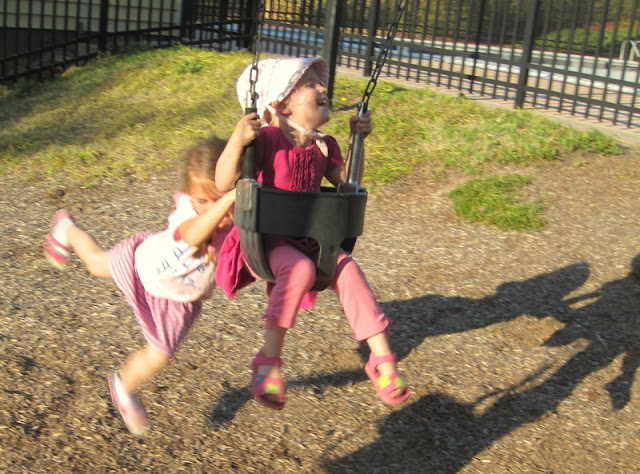 Rachel wanted a turn to actually sit on a swing so we walked over to the big-kid swings where Rachel discovered that she's finally caught on to the idea of pumping! We've been working on it for ages! She still can't get started on her own, but if I give her one good push she's golden. She kept her swing going for a long time! 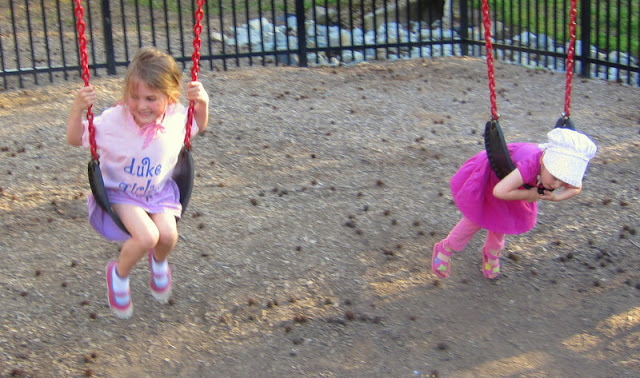 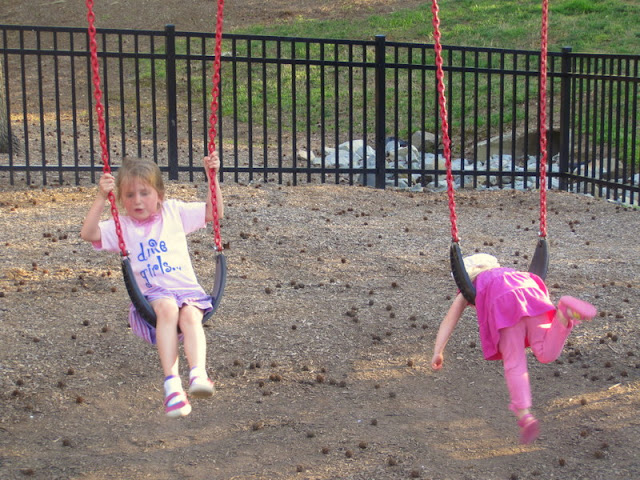 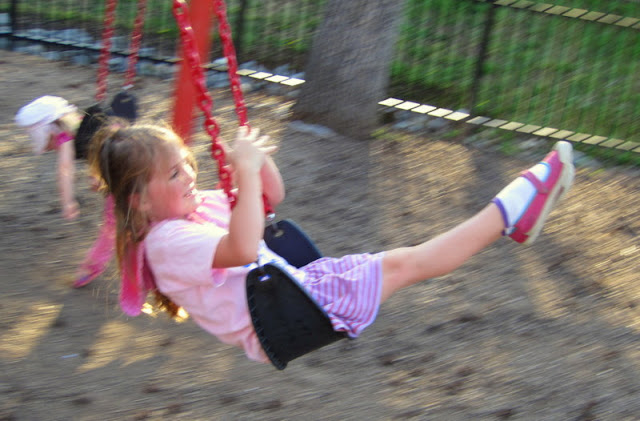 She was so proud (and so was I (I mean, we've only been working on this skill for two or three years))! 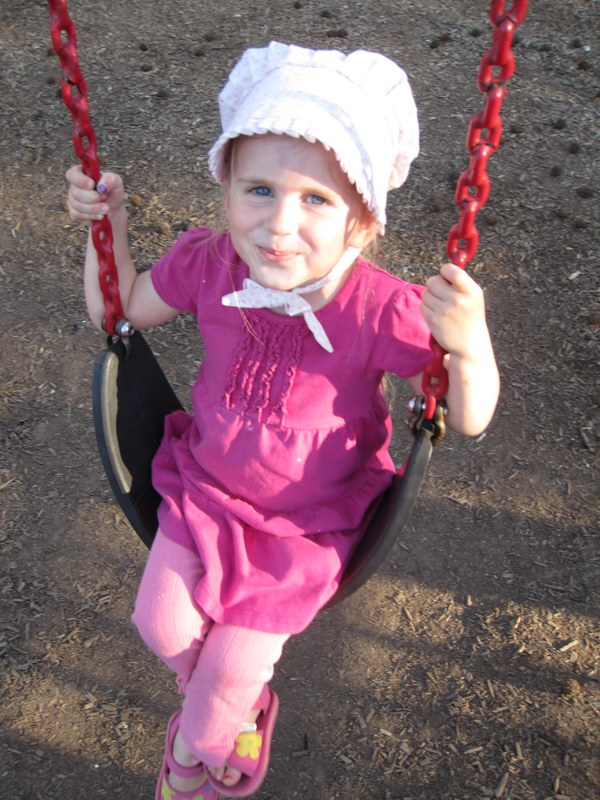 Benjamin and I stood around and watched the girls swing on their own for a few minutes. It was kind of weird to be at the park and not have to be pushing anyone (Miriam doesn't like going very high on the big-girl swings so pushing is minimal when she's on them). 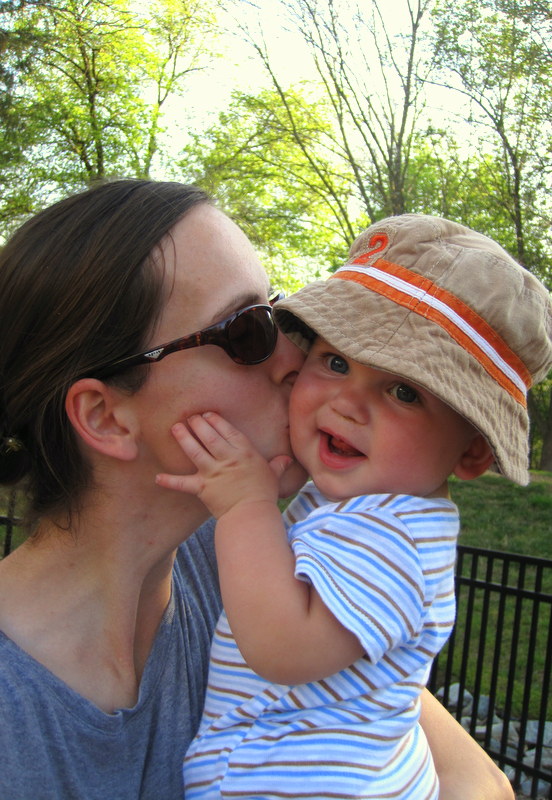 When Rachel was finished swinging (finished because she tried to do the Superman Swing and ended up flipping over and landing on her bottom (tears, tears, tears)) she asked if she could take Benjamin down the slide. I told her that she could—she's done it loads of times so I trusted her.

Unfortunately she came off the bottom of the slide like a rocket, took a few stumbling steps and tipped right over, sending Benjamin scuttling across the wood chips. He was not a happy boy... 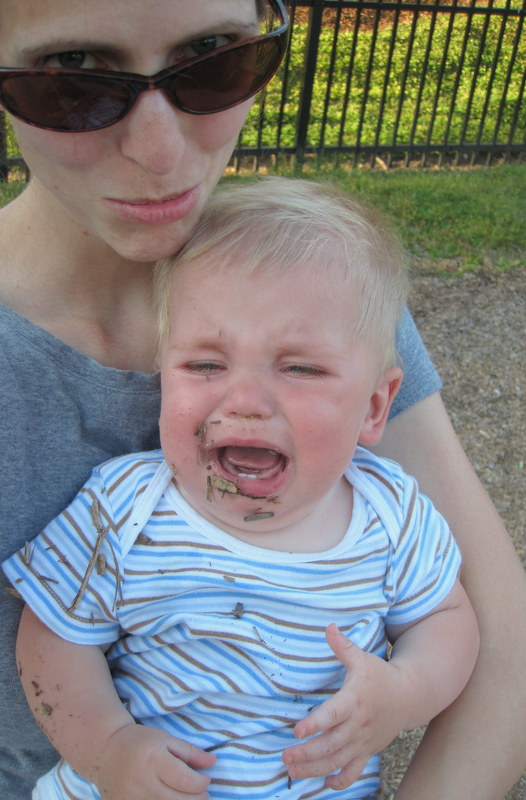 But then he discovered that those contraband wood chips were conveniently stuck to his face. Score! 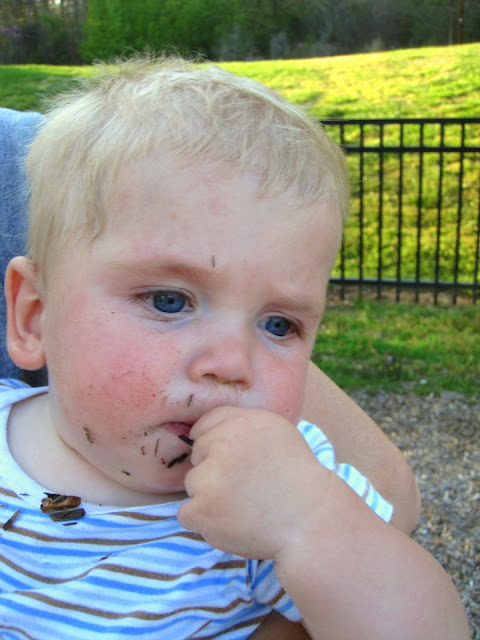 She took him down again to try to give him a more positive experience, but he was still pretty nervous about the whole situation. 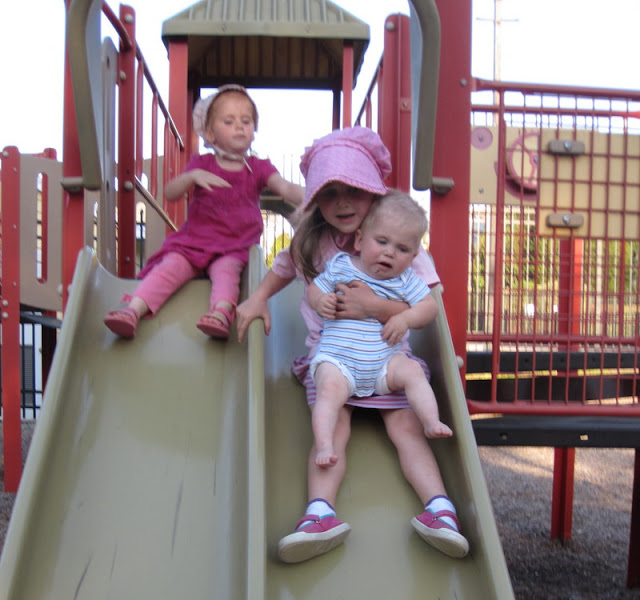 He was especially nervous at the bottom of the slide, and rightly so, I suppose. 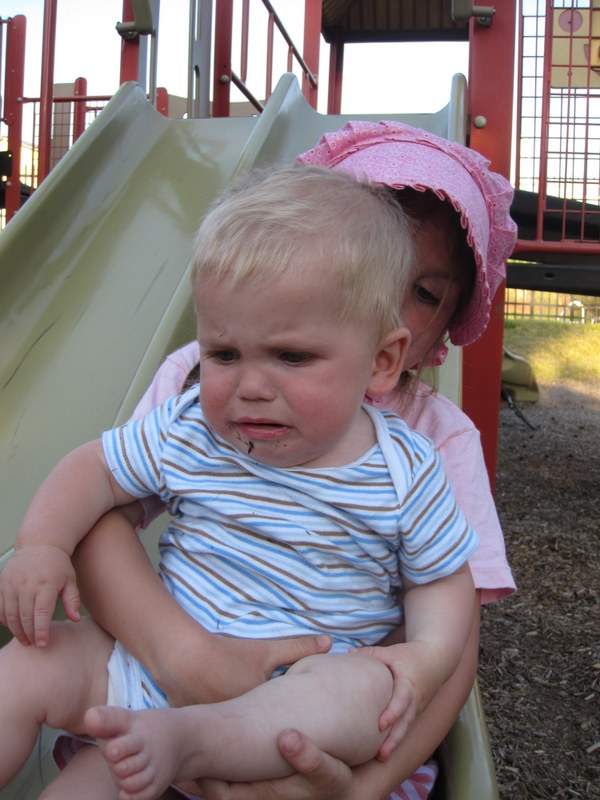 We decided that perhaps he'd had enough sliding so Rachel decided that Miriam should slide down with her. This didn't go over so well, either. 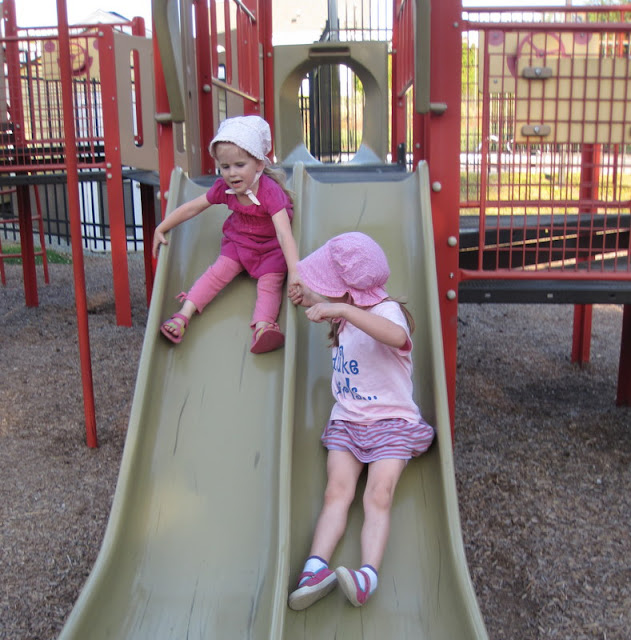 And then when Miriam was climbing up the slide (because stairs are boring) she slipped and landed on her face. She slid all the way down on her face, giving herself a nice slide-burn on her chinny chin-chin.

I texted Andrew to say, "So all three kids are bleeding! Playground ftw!" (that's "for the win," in case you didn't know).

Rachel had scraped her back, Benjamin had the tiniest scratch on his cheek, and Miriam's chin was bleeding, too—all within the course of five minutes. Fortunately there were more tears spilled than blood; nothing even warranted a bandaid.

Miriam shook her head and suggested "this many more minutes!" So we stayed for a few minutes longer before coming home to our hot house (which is now a chilly 82 degrees—even though all the windows are open and it's only 73 outside (come on, cool off the house, outside air!)). The girls were so exhausted from playing in the heat that they fell asleep right away, which was nice. Benjamin's been put to bed once but he's already up screaming again. It's kind of his thing.
Posted by Nancy at 9:54 PM