On Tuesday morning we went to BYU to visit Naanii at work. One of Uncle David's teeth broke so he had a dentist appointment; he dropped us off on his way and we walked up to the library. Naanii was surprised to see us because she was expecting us to be my friend Carrie (since she saw the stroller wheels first). We had missed Carrie by minutes!

My mom quickly escorted us to the PIVA room (which is where Carrie had been headed) but Carrie wasn't there, either. Fortunately, one of her violist friends was there and he had her phone number so he texted her to say that I was looking for her and she came back to visit for a few minutes with her son James, who went around shutting every door he could see (which reminded me quite a bit of Josie 17 years ago). She and her family live in Maryland, which for some reason I was thinking was far away (because Virginia is close...but Maryland...that's super far) but she then said, "I know, it's hot in DC already, too."

And I was like, "What were you doing in DC?"

Right. So sometimes my geography's a bit off. Because DC is rather small, as far as geographical sprawl goes, and I know that it touches both Virginia and Maryland and if we can drive all the way through Virginia to get to DC, Maryland really isn't that far off.

It was fun to see her; we invited her to the BYU playgroup that afternoon but she wasn't sure she could make it (and she couldn't so I should have grabbed a picture when I had the chance; we'll have to rendezvous back east sometime).

David came back to get us after his appointment and he taught Benjamin how to play on this xylophonic instrument. 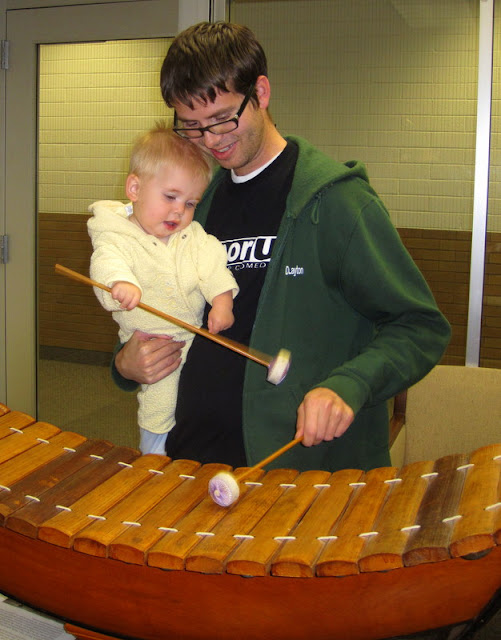 We ran home for a couple of hours so that we could have lunch and so that Benjamin could spend some time with his favourite toys. 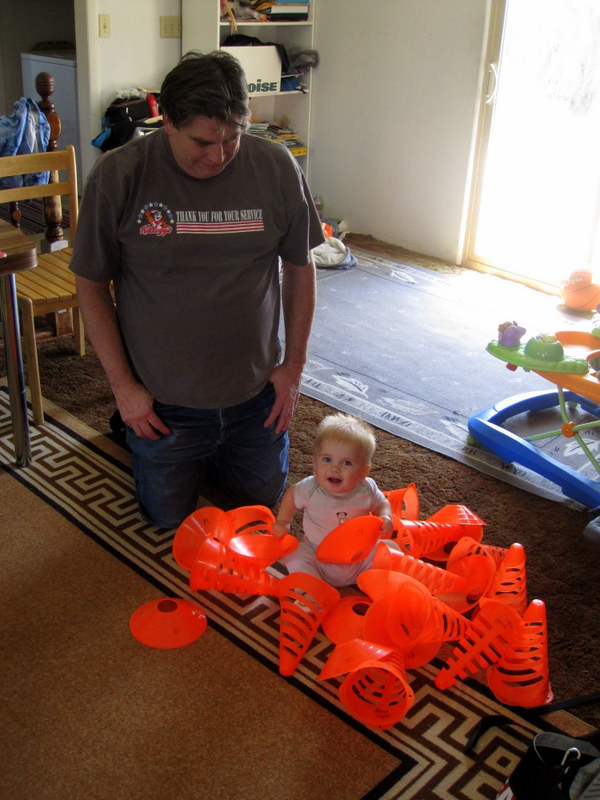 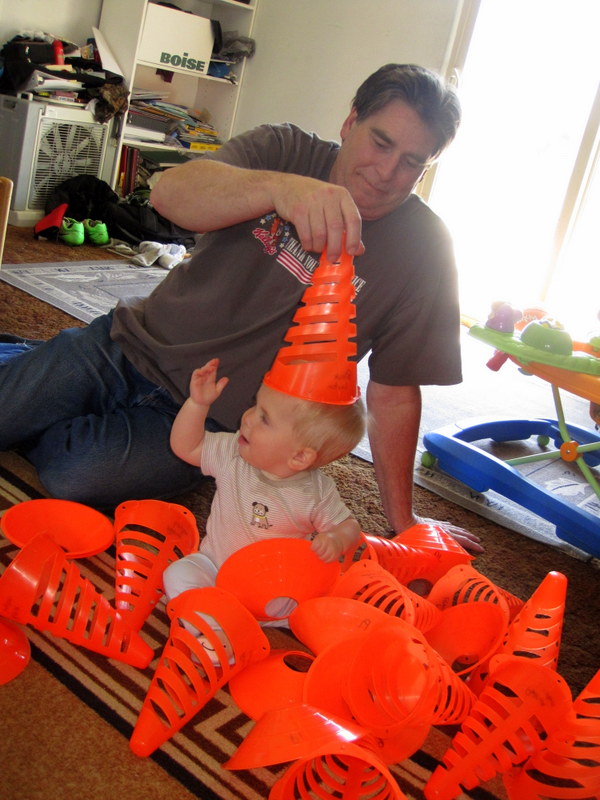 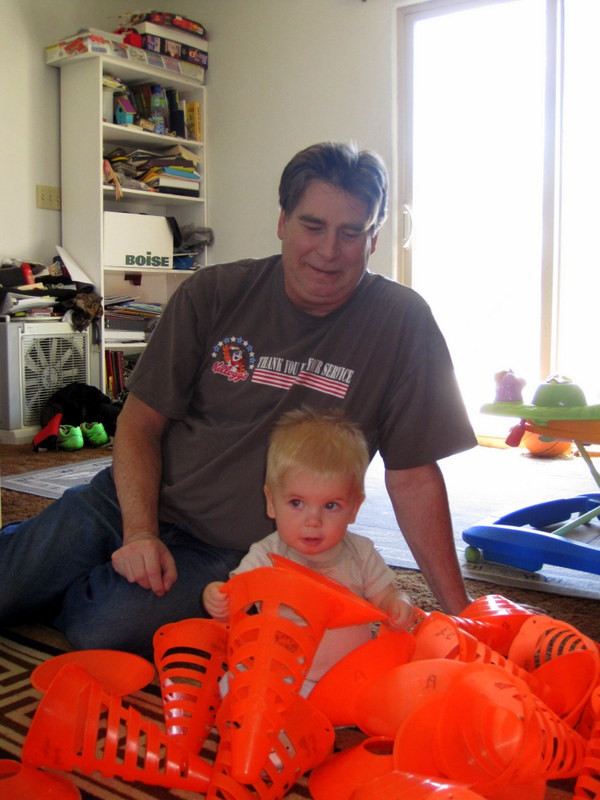 Just as we were leaving the house Kelli and Allen drove up to pick up the last of the leftover wedding cake. They arrived just in time to visit with Benjamin. Kelli thought it was funny to hold him out to Allen, who "is nothing but a big teddy bear," but Benjamin didn't hear her say "teddy." 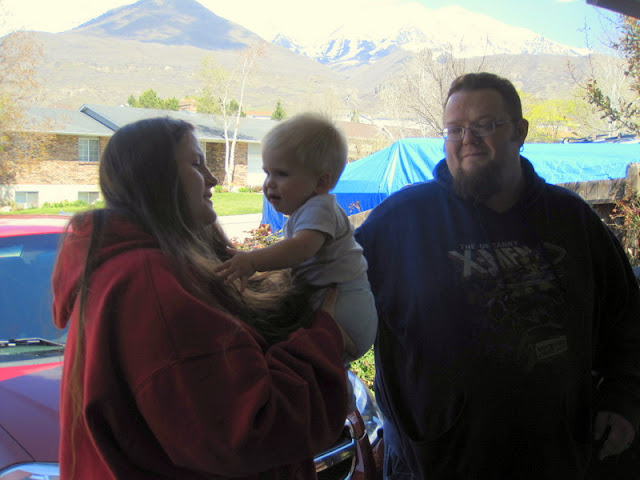 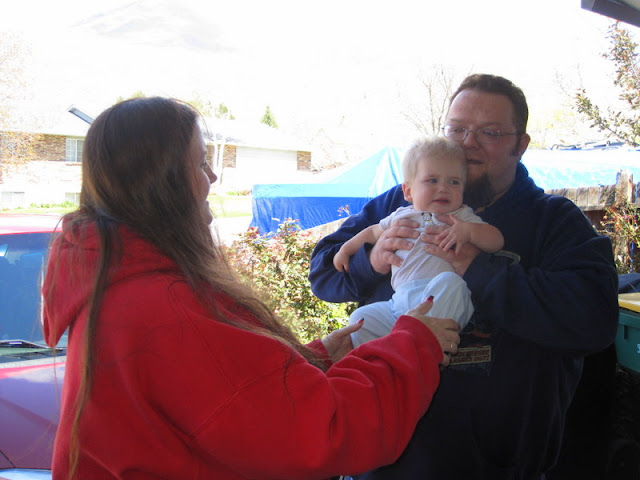 The play date at Geneen's was fun. I had a number of friends come from all different chapters of my life, but they got along royally. Courtney I've known since almost forever. She was in our Parkland ward in Calgary (I moved there when I was nine and the middle of grade four). Then we moved to High River and then she moved to High River and then we moved to Orem and soon after I started at BYU and then she came down to BYU and we were roommates for a time. So we've followed each other around and have shared three different wards.

Her baby Laila was born just as we were getting ready to come home with Benjamin.

Shallee was in our ward here in Orem. She became one of my good friends in the ward and neighbourhood and at school. I've known her since I was fifteen. She worked for my mom in the library and went to Ghana with Patrick. Her son is Miriam's age and she has a daughter who was born right around the time Benjamin should have been (but she was left napping with Daddy).

Julia was a co-worker of mine at the Orem Fitness Center. We were both lifeguards and swim teachers. She was a lot of fun to work with and so it was easy to be good friends once we both started at BYU. Both she and her husband worked for my mom in the library. They have a bushel of children. I'm not sure any of my children actually line up with any of theirs precisely but it doesn't matter because mine fill in any gaps they might have left. Although it would have been fun to see Julia's children, she played it smart and left them with her mother. Of course, I can't blame her for doing that since I left most of my children with my mother-in-law (and that was certainly relaxing).

Geneen hosted for us. She lives in her parent's future retirement home where her bathroom and closet combined are about as big as my entire house. You might think I'm exaggerating but I'm really not. Our children fit together like shuffling a deck of cards. Evelyn, Rachel, Eloise, Miriam, Michael, Benjamin, Asher. Together we've had a baby every year (and have the same number of children as Julia (almost--she's expecting #7 right now)). I know Geneen because she married Doug, who used to work for my mom and who now works with my mom. She's a lot of fun!

My mom and Josie came as well, of course. Josie took the picture for us. The older kids are all playing outside (and were having too good of a time to call in for a lousy picture) but we had fun watching the babies play. Benjamin and Laila were fascinated with each other and they're almost the same size, though Laila is taller (of course).

Here's Benjamin "sharing" a toy with Laila. He put it exactly where he'd want it if he were "playing" with it himself: 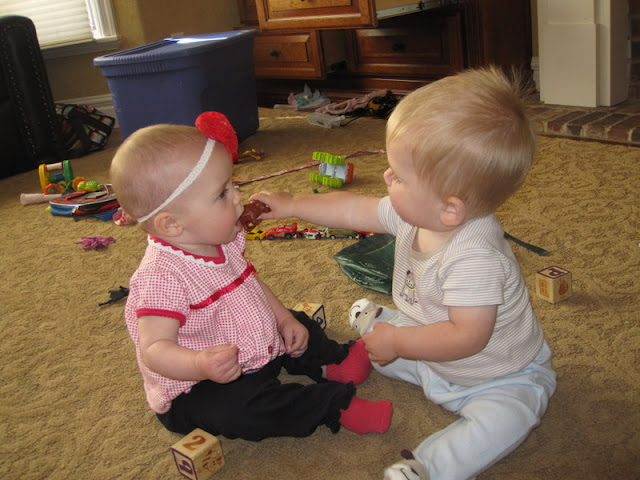 My cousin Mary showed up just as everyone was leaving. She had to wait for her kids to get out of school and then hurried over to the party. I'm so glad she came! 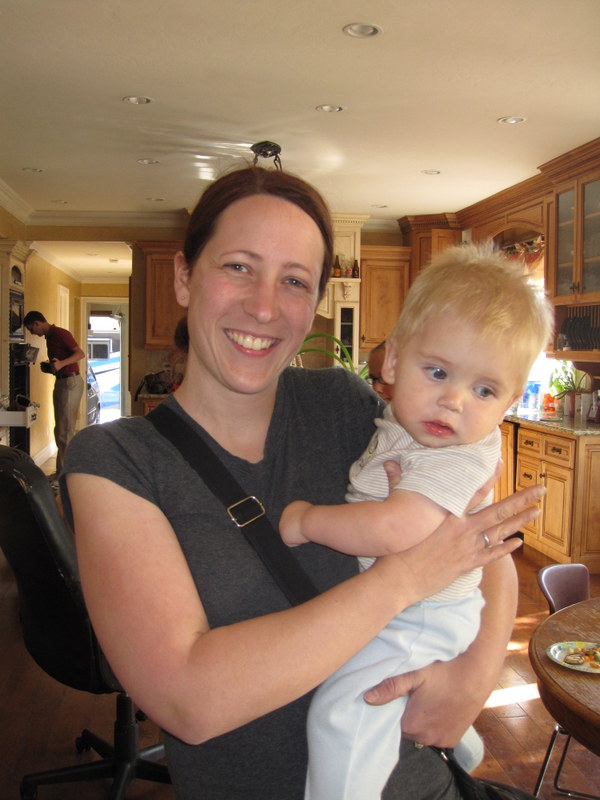 Her kids are getting so big. Her youngest and my oldest are the same age. Our oldest are both named Rachel/Rachael (and my cousin Michelle now has a Rachael as well!) and Mary's Rachael is blossoming into a woman before our very eyes. I suppose it was more shocking for me because I haven't seen Rachael in ages. She's nearly as tall as her mom and is almost in middle school. It's crazy how time flies! 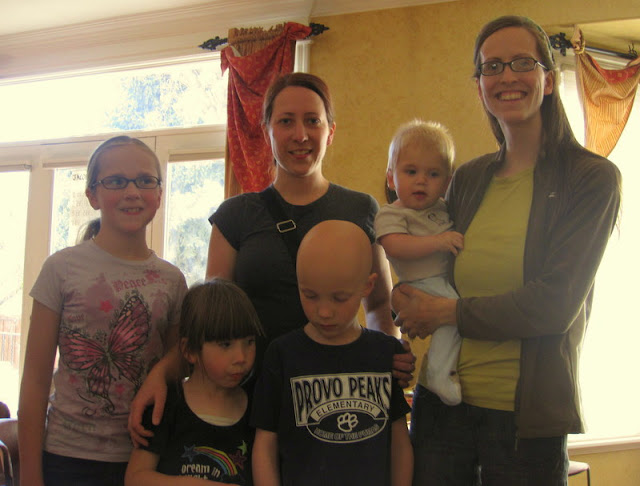 Benjamin was very interested in Anthony's head. Anthony didn't like this one bit. I have a feeling it's because Benjamin's hands are typically fairly slobbery so anything he touches gets a little slobbery, too. I enlisted Geneen's kids as photographers, so this picture was an interesting one--I was in the middle of telling them how to work the camera when they figured it out--but Anothony's reaction to Benjamin is too great to not include it. 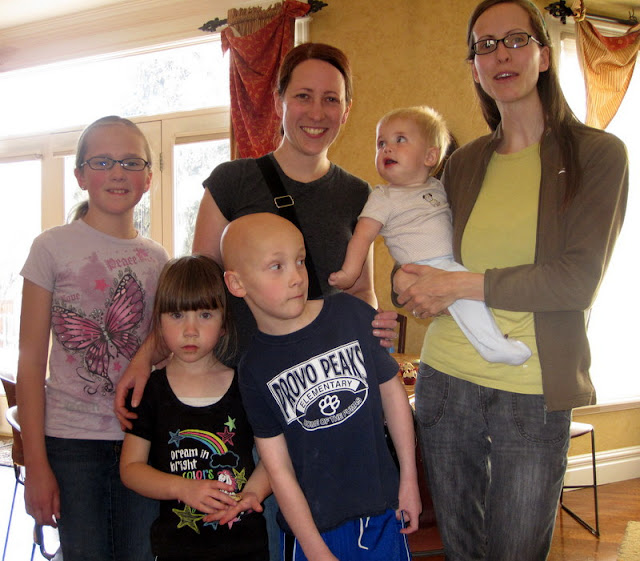 That afternoon Benjamin spent some time playing with Rosie. One of his favourite things lately has been practicing his walking, so anyone who will walk with him is a friend. 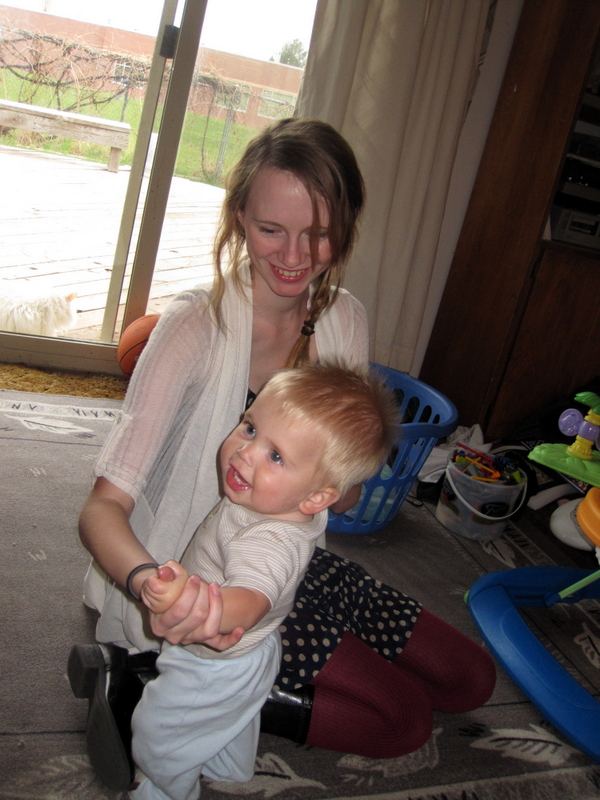 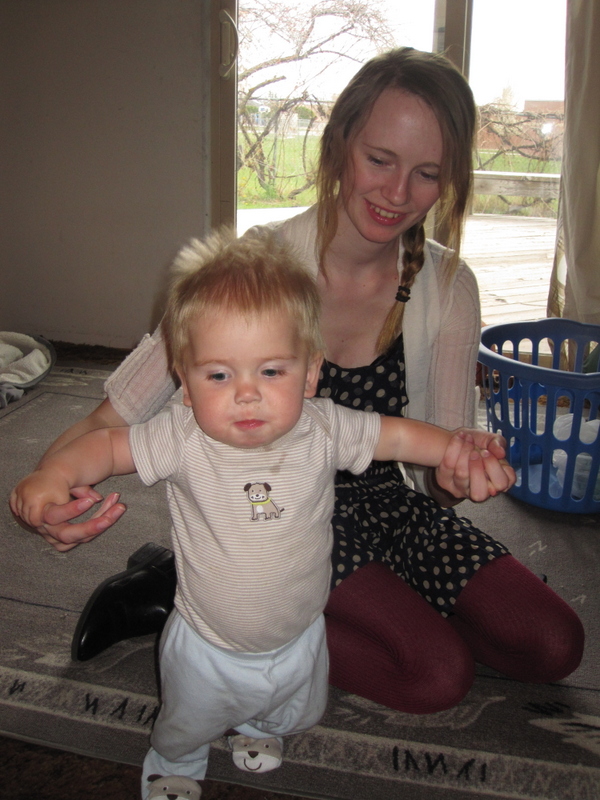 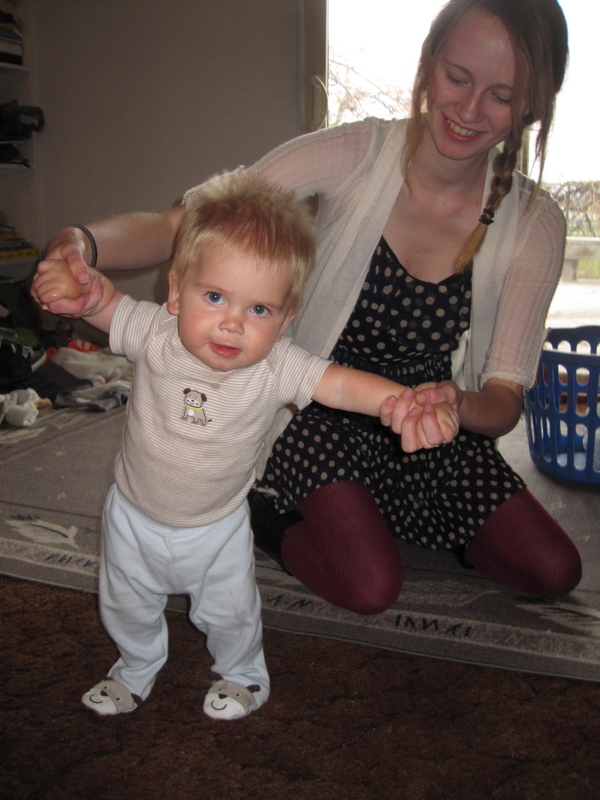 On Wednesday morning we went out with some friends from our old ward to Nielson's Grove Park to visit the duck pond. Benjamin thinks ducks are hilarious--especially these ones who were not particularly nervous around people. 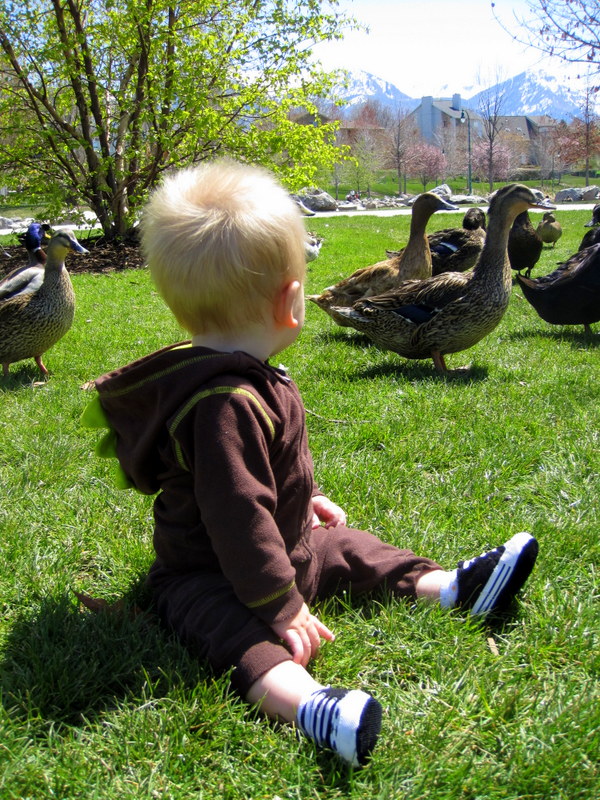 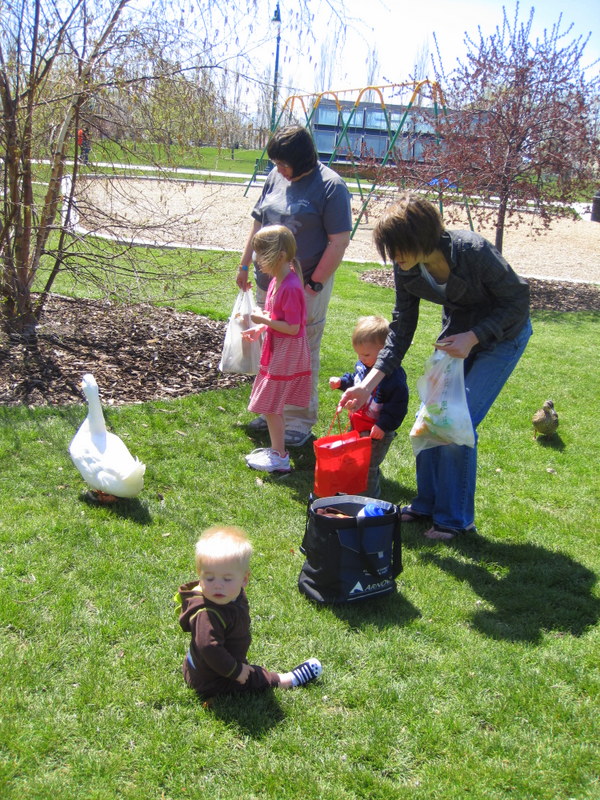 I can't believe this little boy Zach! He was such a bitty thing when we left and now he's walking and talking. He was chasing the ducks all around the park. We wondered whether the ducks enjoyed that or not and decided that they must because Utah Lake isn't that far away and if they really wanted to not be chased by babies the ducks could go there. 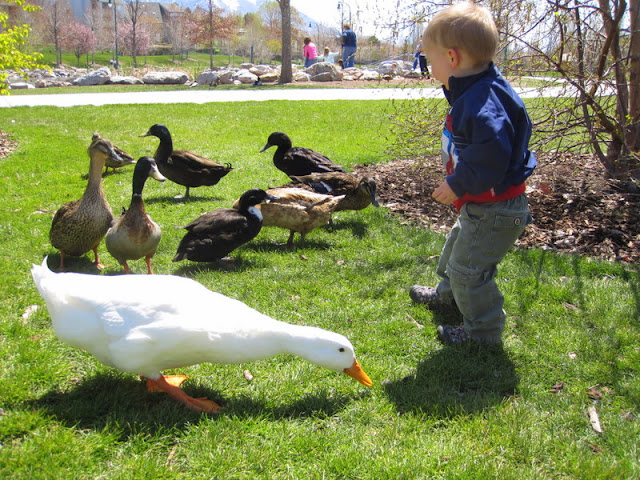 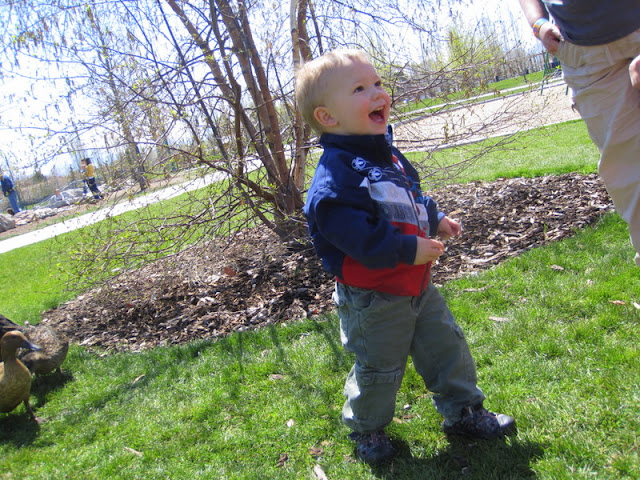 Asher was all about the ducks, too. He was so sad when he found out that Rachel and Miriam weren't coming but recognized me right away. I stopped by their house on my way up to my in-laws' once and he just told me to come in and then ran off yelling to his mom that "Rachel's mom" was at the door. 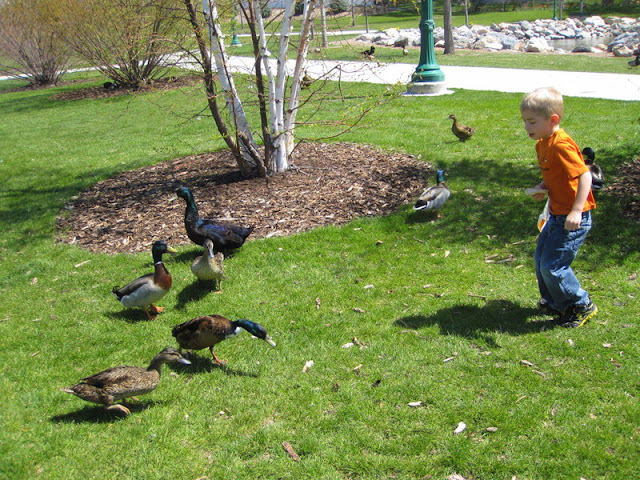 Benjamin didn't do much duck chasing and I didn't actually leave him on the grass too long either because we all know how fond he is of picking grass and eating it. That little habit of his in tandem with all the duck droppings was a little too much for me. 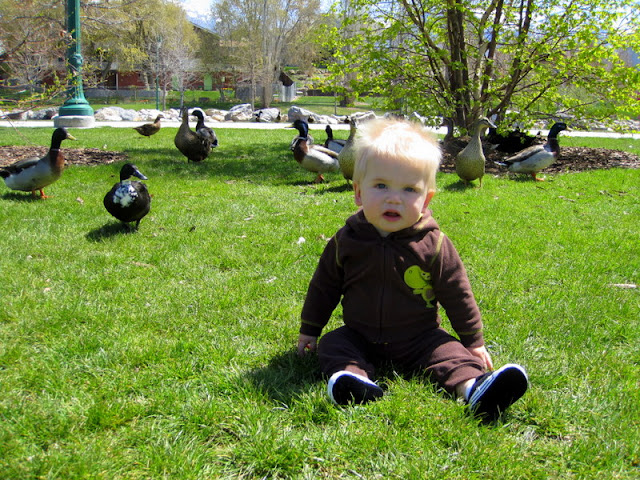 So we moved to the swings, which Benjamin enjoyed very much. 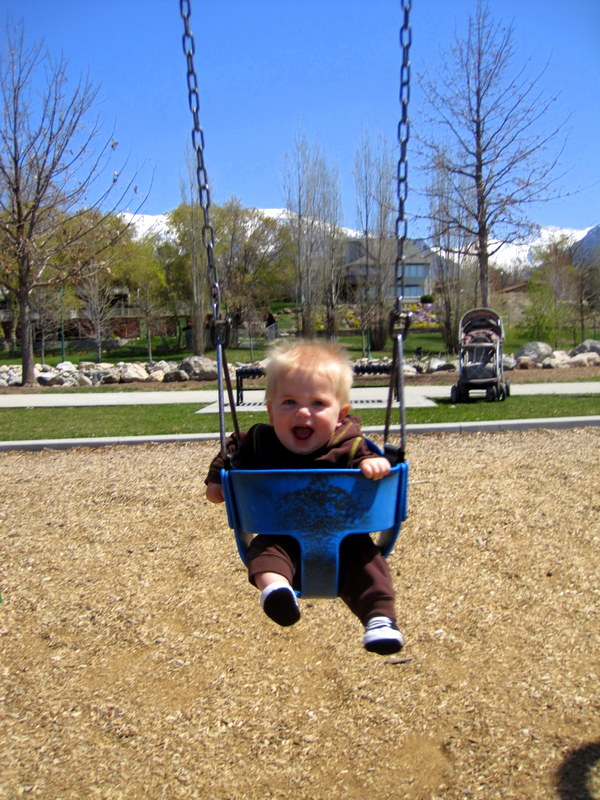 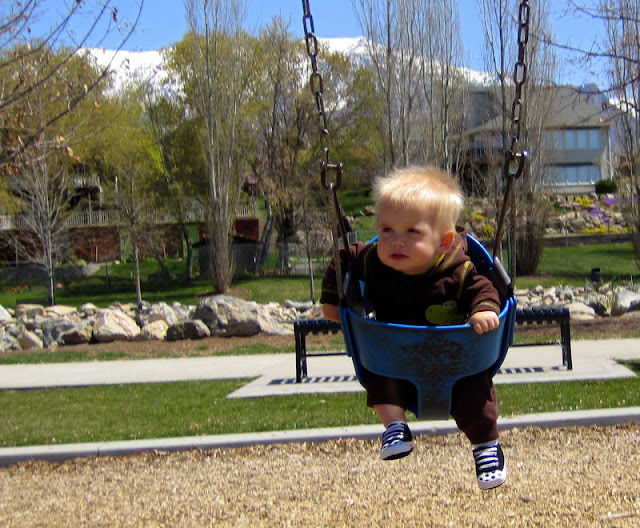 We also did a little walking by the pond, but just a little. Zach was a little unsteady on the rocks and made everyone nervous. 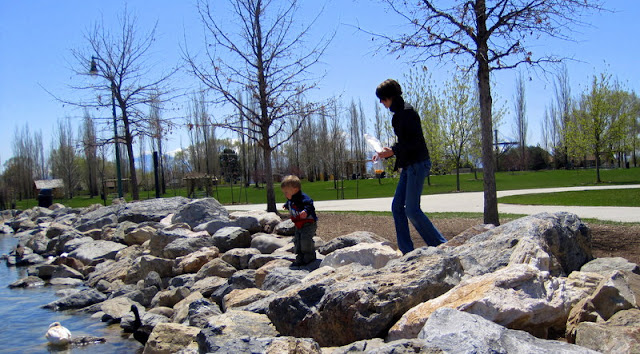 Benjamin enjoyed staring at the ducks from his perch on a rock, though he didn't do as much exploring as the other boys (occupational hazard of being a rather unmobile baby, I suppose). 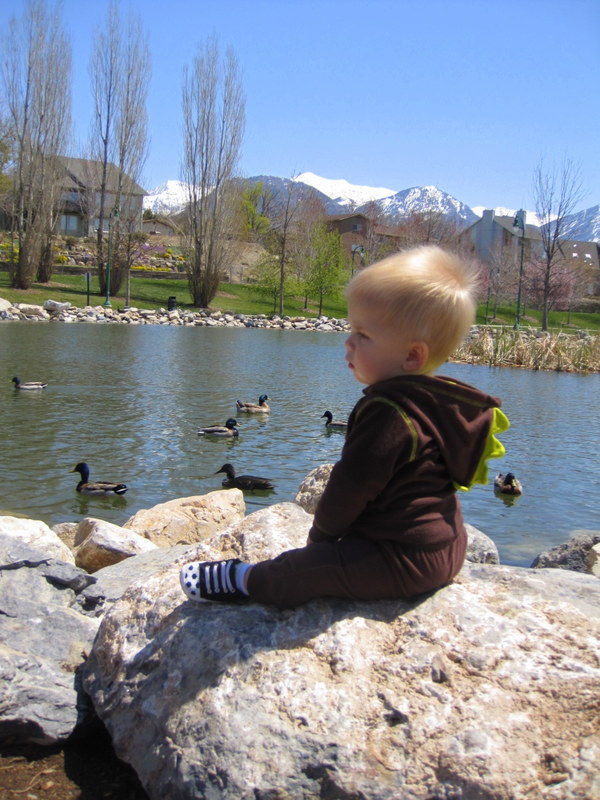 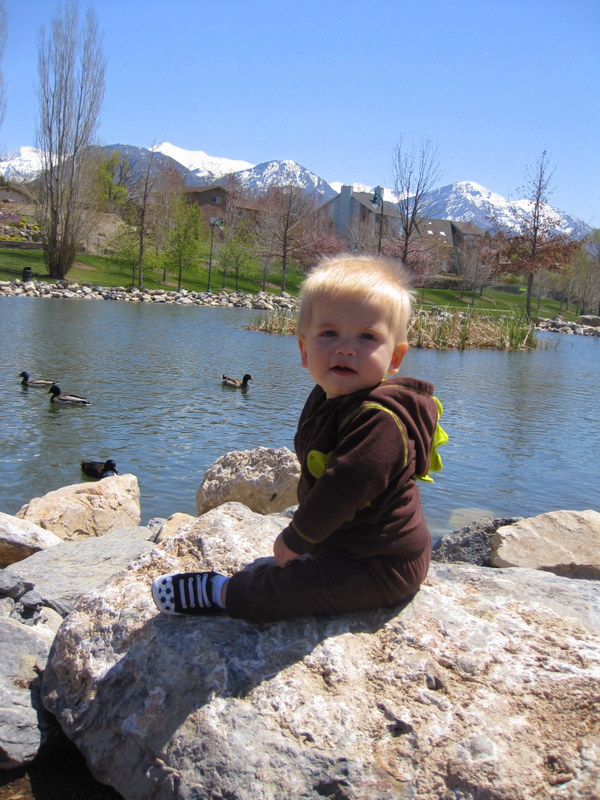 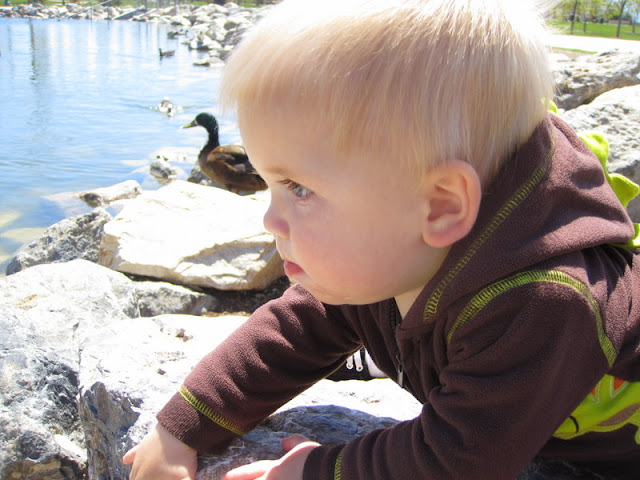 We had a great time in spite of the chilly weather. 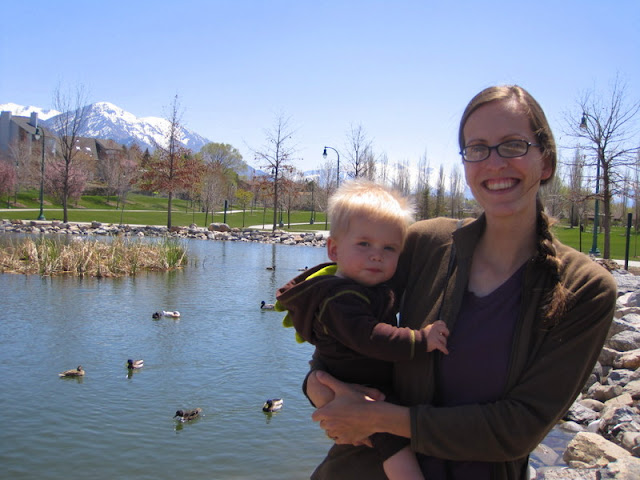 Now I'm busy packing up to get back on a plane again. It was fun to be here and see everyone but I think it will be nice to get back home as well.
Posted by Nancy at 12:55 PM