Thursday was such a long day it could easily have been two or three.

We woke up bright and early to leave for the airport, expecting to sneak out of house before the girls woke up. However, Rachel's been anxious about me going away and has been crying at school over me even before I left. She managed to rouse herself and stumble out of her bedroom, quickly dissolving into tears on my lap. We had a nice little snuggle before I had to kick her off and tell her to go ahead and awake up grandma (even though it was an hour earlier than she needed to be up for school).

The flights were wonderful--or at least as wonderful as a flight with a 10-month-old could be.

Southwest doesn't do assigned seating. Instead you're called to board the plane based on priority and get to choose your seat on the plane. Families with small children have rather high priority when it comes to boarding planes (thank goodness) so Benjamin and I were in the second wave of people to board the plane.

As I walked down the aisle to find a seat, I decided that I probably shouldn't sit by anyone already seated. Those with first priority likely paid extra for the privilege of selecting their seat first and I figured they wouldn't want to sit by a potentially naughty baby. So instead I chose an empty row and grabbed the window seat.

Many, many people passed up the empty seats beside me until a kind, lovely woman sat down next me me gushing, "Oooh! I get to sit by the baby! Look at his tiny toes! What's that? You like my bracelet? Here you go, little sweetie!" And with that she relinquished her neon green bracelet.

Benjamin hadn't slept well the night before we left, which ended up being a blessing because he and I got a lot of napping done on our first flight. When he wasn't napping, our seat companion was dancing her bright pink fingernails up and down Benjamin's arms or letting him pat at the flowers spattering her shirt. She was on her way to see her grandchildren, who are a little more grown up than Benjamin.

"I wish one of my kids would have another one!" she told me. "I just love babies!"

Our little pit-stop in Denver was a little crazy. We landed, I picked up our stroller, plopped the diaper bag in it, and rushed off to the complete opposite end of the terminal (with Benjamin in the front carrier) where I handed my boarding pass over and hopped on the plane. No waiting involved; I was a little out of breath but at least I made it!

The second leg of our journey went just as smoothly as the first, only there was an empty seat between me and the kind grandma who'd chosen to sit next to us so Benjamin got to sprawl out for a while, which he enjoyed.

Once at the Salt Lake City airport, I made my way to the luggage claim area at a leisurely pace (rather than the breakneck pace I'd adopted in the Denver airport). As I came into the public area of the airport, I started scanning for my mom and sister. I'd texted them just before taking off at Denver and my mom had texted back to say that they'd be on their way. However, they were no where to be found.

I wandered around and found my luggage carousel and when I still didn't see them I dug out my phone.

"We are here!" a text message told me.

I waited a while longer but still didn't see them. Soon my phone rang.

By the time they found me I was just pulling my suitcases off the carousel.

Josie quickly snatched up Benjamin while my mom gave me a hug. Not too far behind them was my sister Kelli!

She had been at the other terminal waiting for her friend Arrika's flight to come in so when my mom and Josie had been busy scanning the crowd to find me and Benjamin they were a little surprised to spot Kelli.

"Isn't that Kelli?" Josie asked, pointing into the distance.

Indeed it was. She and Arrika walked through the airport to say hello to Benjamin and me as well. It was perfect timing. 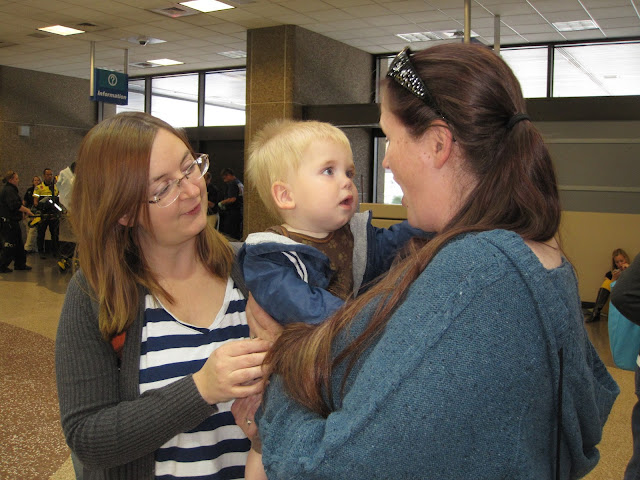 On our way out to the parking lot, I spotted another familiar person. A very tall, friendly looking man in a suit was walking toward us, wheeling his suitcase behind him, while my mom and I walked the opposite direction, lugging ours behind us. I grinned at him, waved, and with astounding eloquence said, "Hey!"

He smiled and waved right back at us.

"That was Elder Perry!" I whispered to my mom.

"I know!" she said, "Though I don't know why he waved at us. He didn't wave to anyone else. Surely he doesn't remember me after all these years. I used to see him every day when David was in preschool with Elder Perry's grandson but that was years ago and he knows so many people..."

It was fun to run into an apostle. Josie and Benjamin missed the whole thing since they'd taken the moving sidewalk (and Josie was so wrapped up with Benjamin that you'd think he was her whole world; she didn't notice anybody).

Benjamin was not thrilled to be packed into a car seat after his long flight, but rules are rules...
Posted by Nancy at 1:06 AM