After spending two hours at ballet—dancing for the girls, latch-hooking a Nana costume for me (if anyone in the area wants to come see Peter Pan, let me know!), doing homework for Andrew, and being a baby for Benjamin—we went to Duke for dinner. We had a decent break between each hour we spent at the studio so while we were home for lunch I went ahead and threw together a picnic as well.

I am so glad we visited the gardens last week because today most of the blossoms were gone. They've been replaced with bright green leaves. Spring has really sprung out here. I think if you sat outside long enough you really could watch things grow at the rate things are popping up around here! 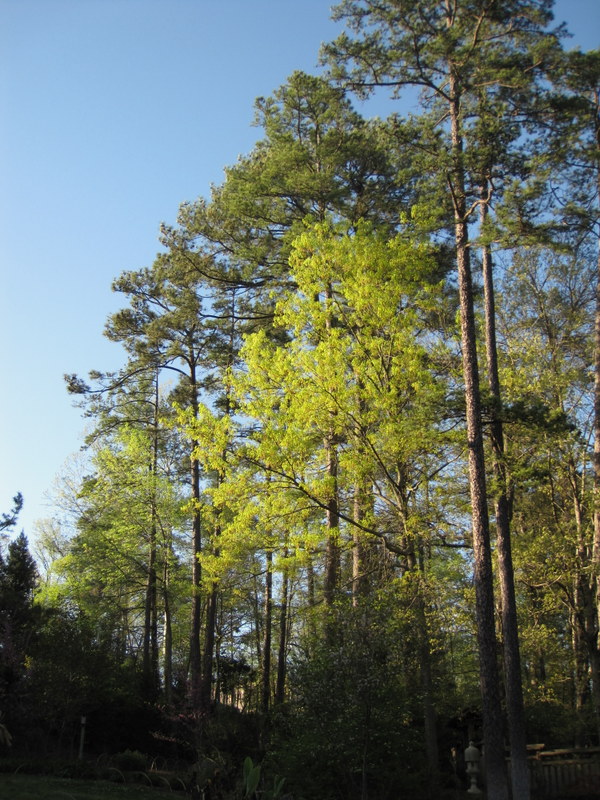 Everything in sight is dusted with a thin film of pollen, which is only sure to get thicker as the season goes by. There were rings of pollen around the pond... 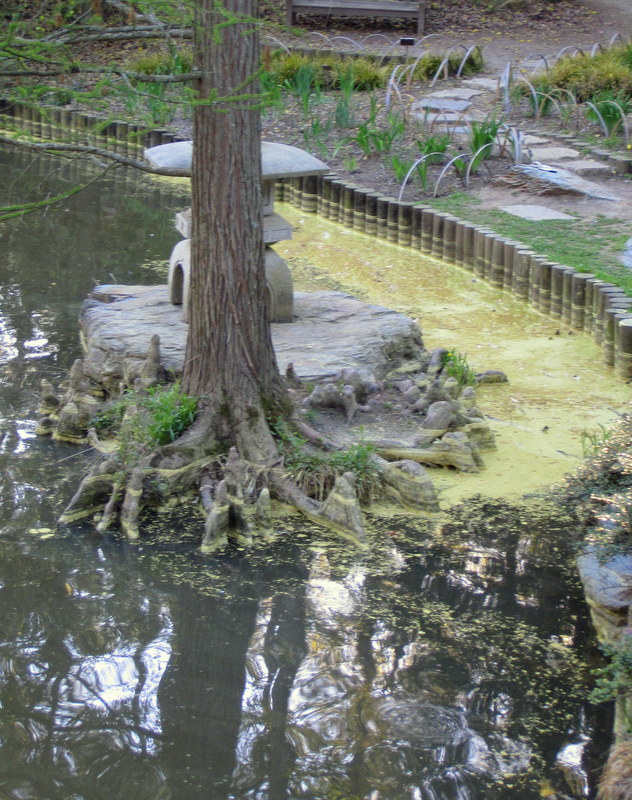 There's pollen on the car, pollen on all our yard toys, pollen caked to just about everything. Andrew's pretty allergic to spring so we've halted our line-drying for now (until whenever "the green cloud," as Andrew likes to call it, subsides). Fortunately, he seems to be the only one to suffer so, though we'll see what next year brings (because after being subjected to so much pollen this year it's possible we'll have more allergy sufferers in our family next year).

Our picnic was wonderful nonetheless. 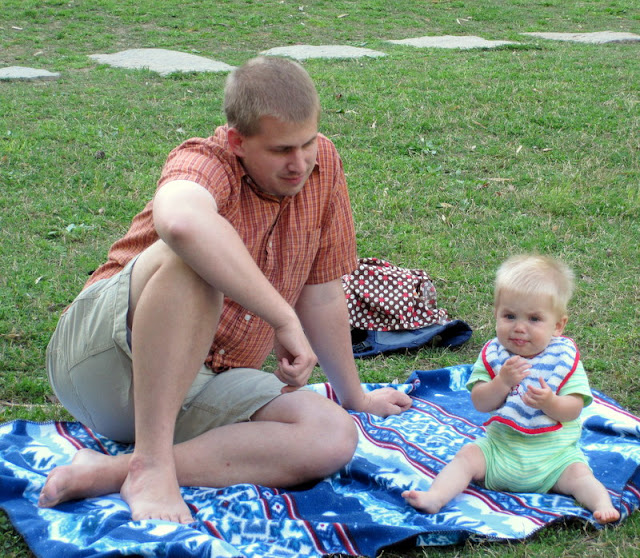 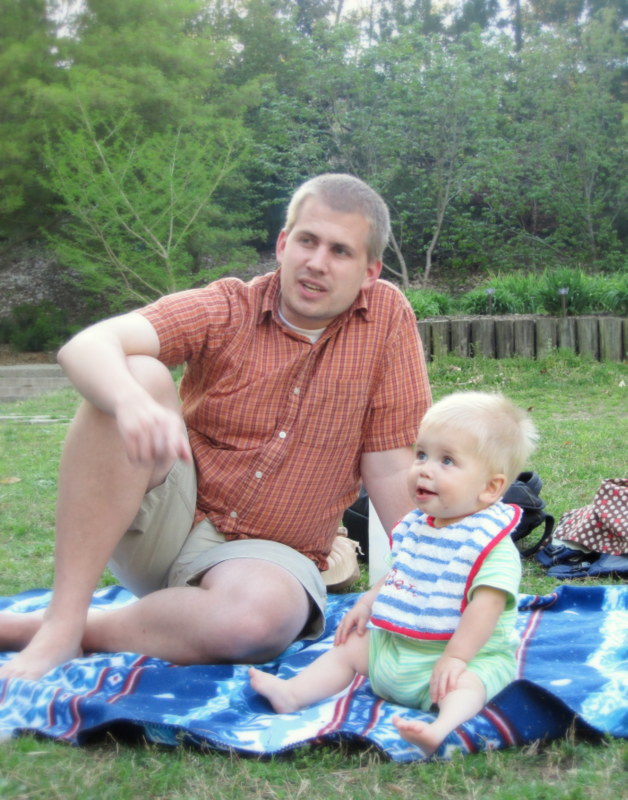 We had a nice view of the pond and enjoyed watching all the birds. The herons were mesmerizing—they're so graceful when they fly and hardly make a sound when they land. The mallards were about the opposite: quacking, flapping, and splashing their way through life. The swans were beautiful. The geese were stand-offish.

The other ducks were cool, too, but I don't know what they all were. The girls kept asking for the names of the ducks and I kept telling them, "The extent of my knowledge of duck species is this: mallard and not-mallard."

We found a sign on the other side of the pond, which we quickly glanced at but since some of us had to use the potty rather desperately at this point we didn't linger. We'll go back to do some bird-watching some other time. 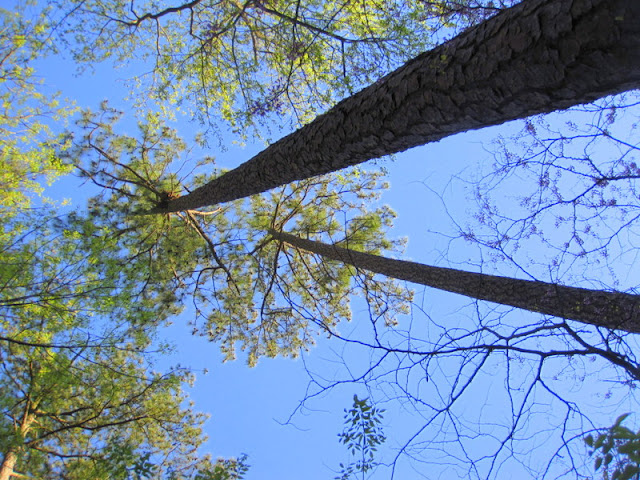 Before we'd known about the desperate need for pottying and before we'd come across the bird sign, we stopped to let Rachel roll down a hill. Miriam didn't want to join in on the fun and instead sat in the stroller anxiously sucking her thumb (she had to go to the bathroom but didn't want to say). As Rachel was rolling down the hill her pants started to work their way off. She had quite the plumber's crack going on by the time she was nearing the bottom of the hill.

When she'd finished rolling she stood up and tottered on the spot, trying to regain her sense of balance. We hollered at her to pull her pants up, so she started hitching them up as she ran back toward us.

She hadn't noticed, however, that she'd rolled right past a family with a dog. However, she certainly noticed it on her way back to us. It barked at her and ran after her a little ways (but only a very little ways because it was on a leash), which startled her so much that she dropped her pants and started running as fast as she could in the completely wrong direction.

She was high-tailing it away from us, with her bare little behind flashing the crowd.

Fortunately, she knows no shame and just pulled her pants up when she'd finally reached safety with her parents at the top of the hill. By that time everyone had finished laughing and she was none the wiser and ready to explore.

She found these cool cypress knees by the pond, so I'm assuming that the big tree to the right is a cypress of sorts. 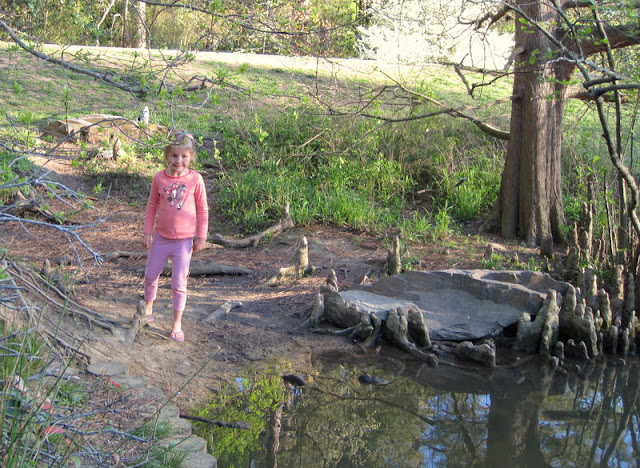 Since we were in the asiatic garden, there were a bunch of oriental-looking statues and things. There was a flower inside this one: 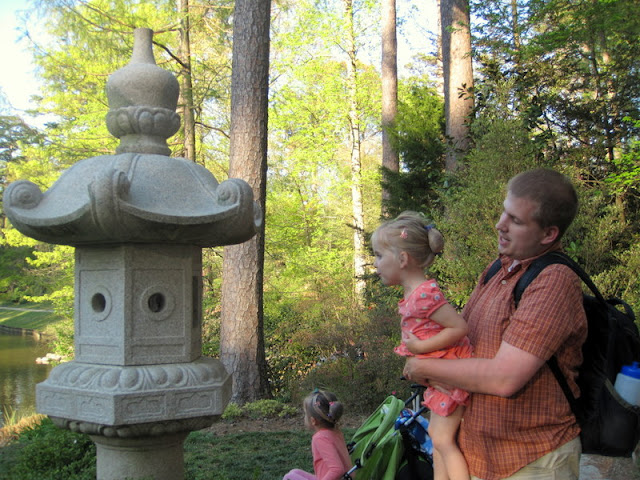 We had fun exploring some of the bridges in the garden. The girls thought this bridge was like a maze: 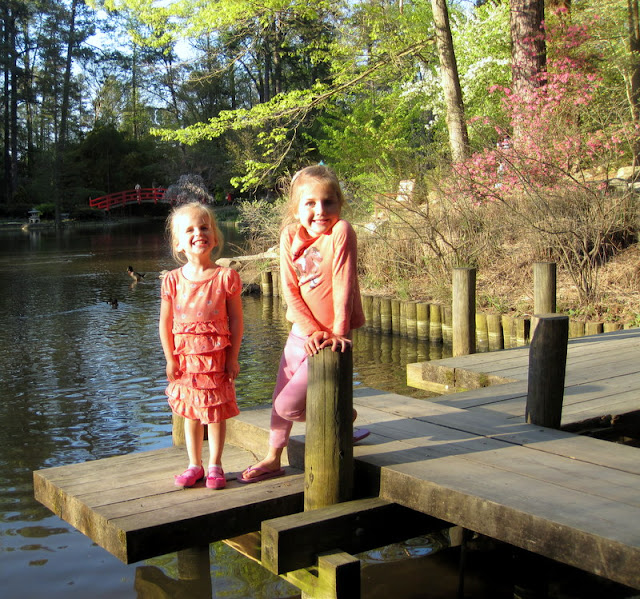 Rachel took a turn with the camera to catch these photos of me and Andrew together (with Benjamin): 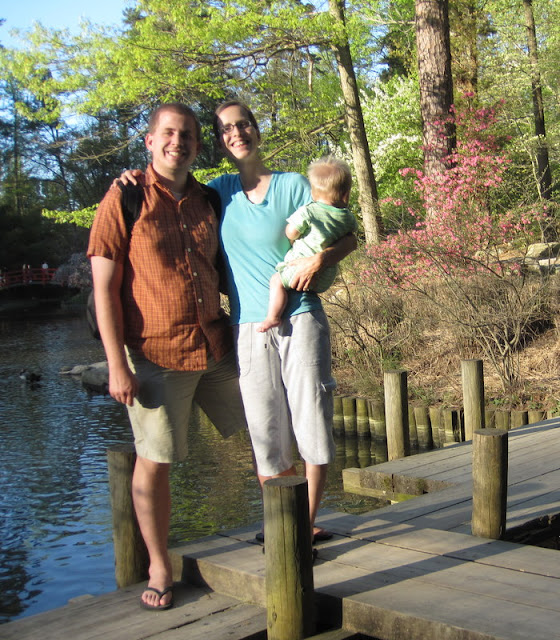 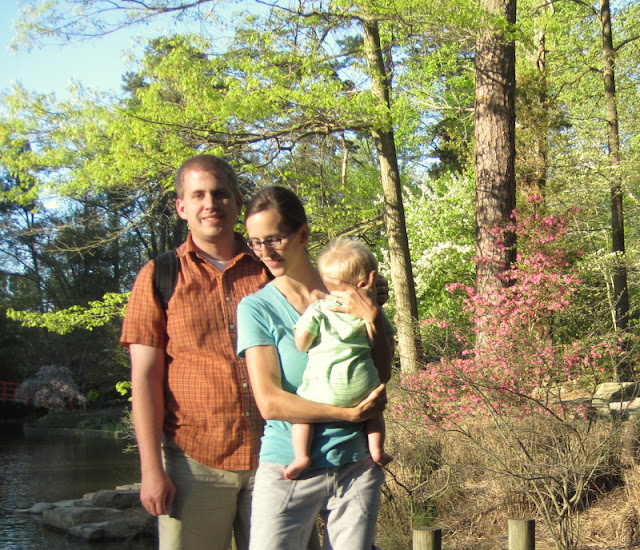 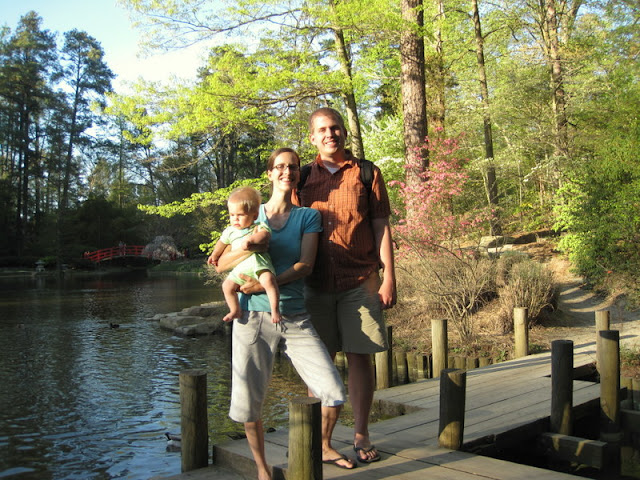 The red bridge is very intriguing simply because of the contrast it offers to all the green around it. 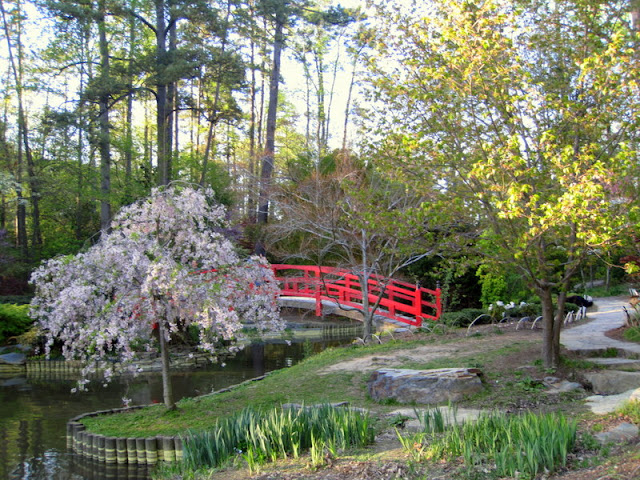 The girls were pulling some pretty wacky poses on the bridge: 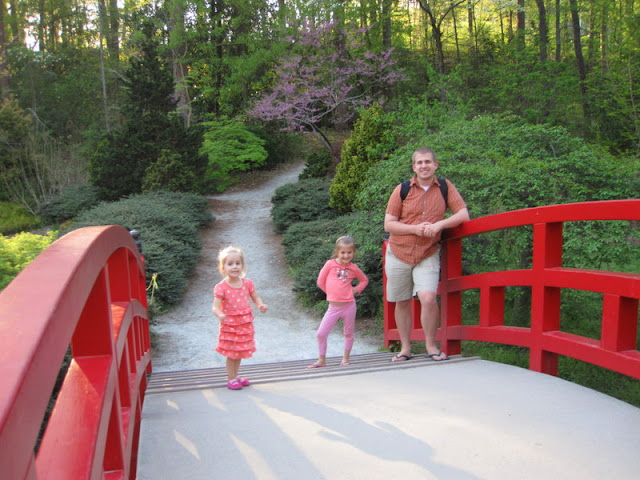 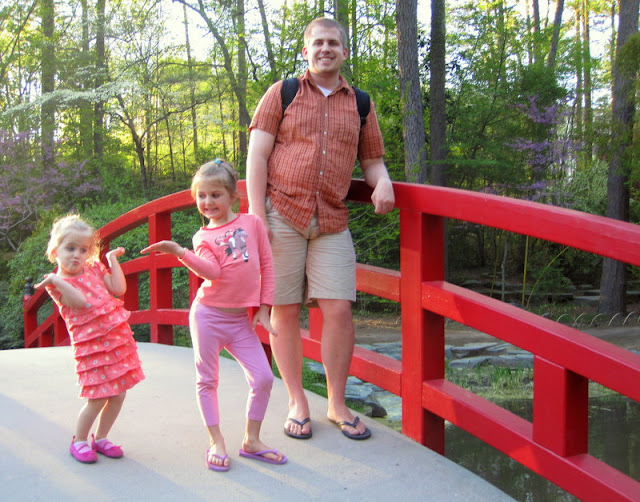 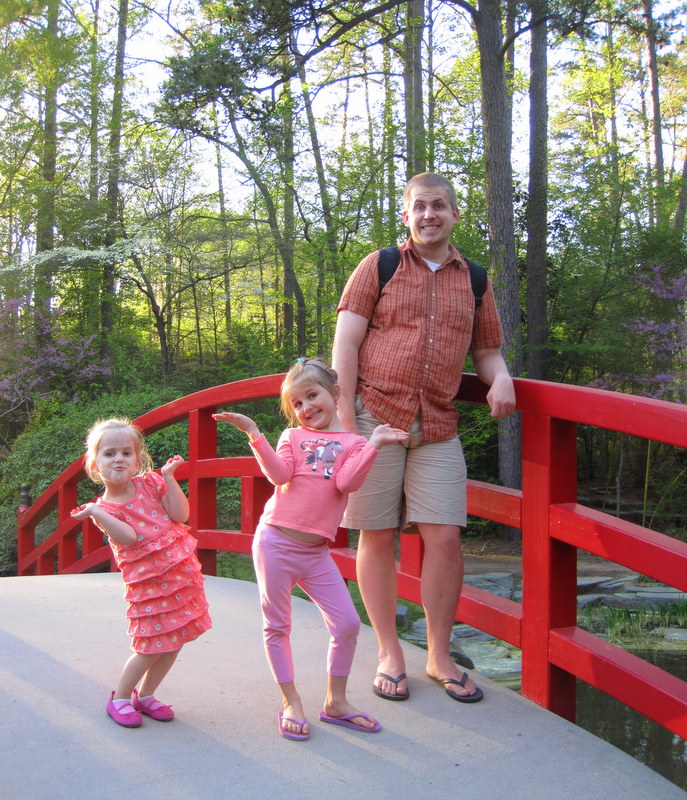 Rachel could really use a wardrobe overhaul. She hasn't grown this year at all, has she? 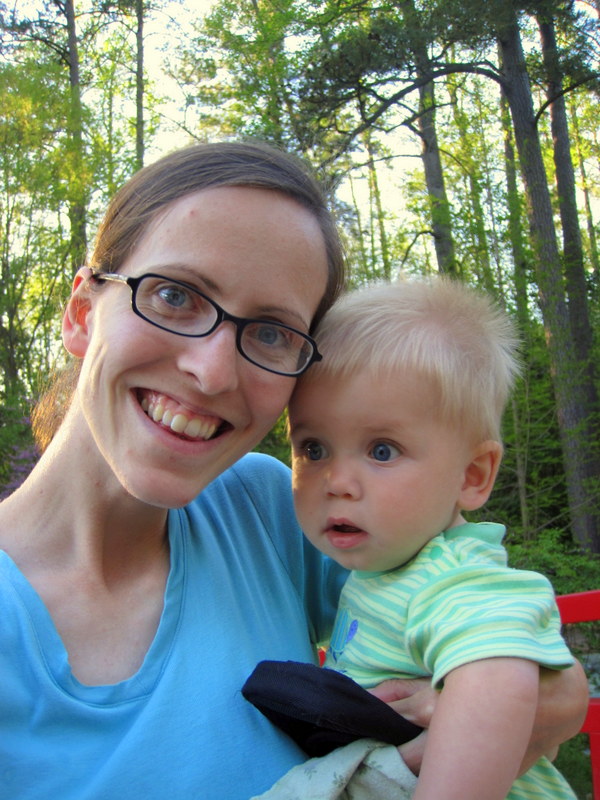 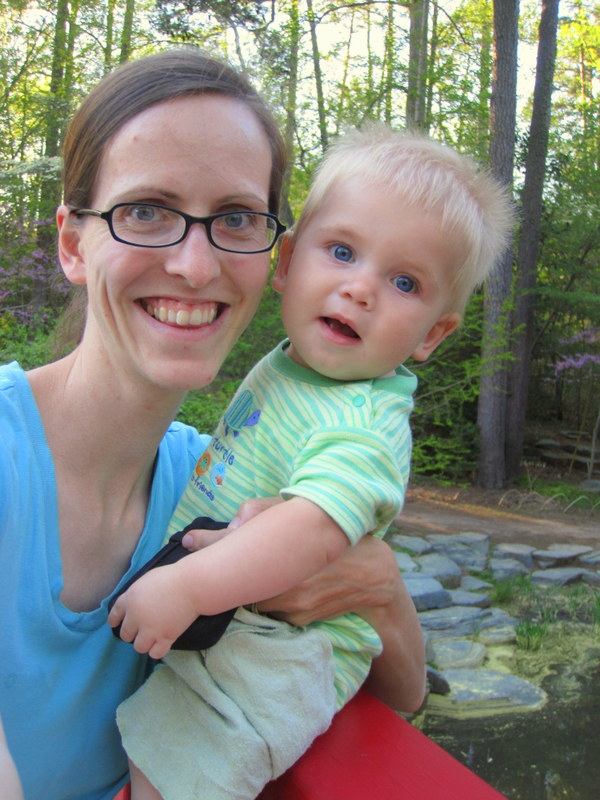