This is phase one of Benjamin's birthday present: 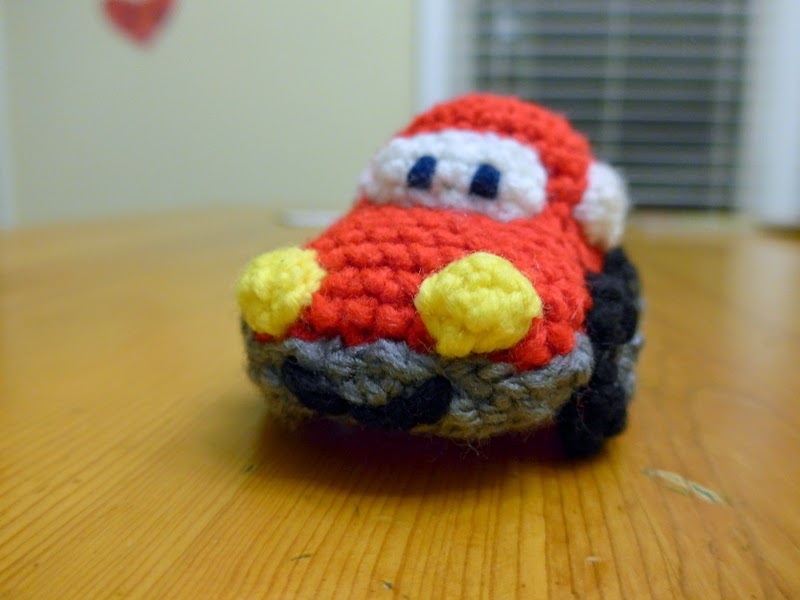 He likes to sleep with his toy cars but it drives me bonkers when instead of sleeping he bangs them along the crib/bed rails. Hopefully this soft car will make going to sleep a little less nerve-grating.

Probably, though, he enjoys the sound of cars bumping along the bed rails and will continue to do it even after he has a soft car to take to bed.

It's not perfect—Rachel, under the guise of constructive criticism, told me that it's really great but that it looks like it got in a car accident or two—but it'll do. I love that it took me only two evenings to put together. And it was mostly free since I used scrap yarn I already had lying around the house. Except for the black. I had to send Andrew out to get some black yarn last night. Who doesn't have black yarn? The answer to that is me and Wal-Mart.

Up next: an airplane and (instead of a semi-truck) a school bus (we'll see if I can be that creative).

I'm using this pattern, in case anyone out there wants to try their hand. I think they're adorable, and there's even a pattern for a roadway mat (which I'm not going to make since we already have one) that is also completely adorable. Who knew crafting for a little boy could be so much fun?!
Posted by Nancy at 10:42 PM