Today's high was twenty-one measly degrees (that's 21°C or 70°F) but our HOA had arbitrarily predetermined that today would be "warm enough" to open the pool, so open the pool was (we won't talk about how it was 90°F earlier in the week or how I think the pool should open the very beginning of May because I think I griped about that recently already). Frankly, the water was fine. I may have been the last person into the pool, but the kids weren't lying—once you got in it was fine.

Miriam has decided that she wants to learn to swim this summer, specifically so she can play mermaids and go in the deep end. We found a little "puddle jumper" for her, which is a PDF of sorts. She wouldn't swim with one on last year but was willing to try one this year (of course, last year she hadn't met the minimum weight requirement yet and this year she has). 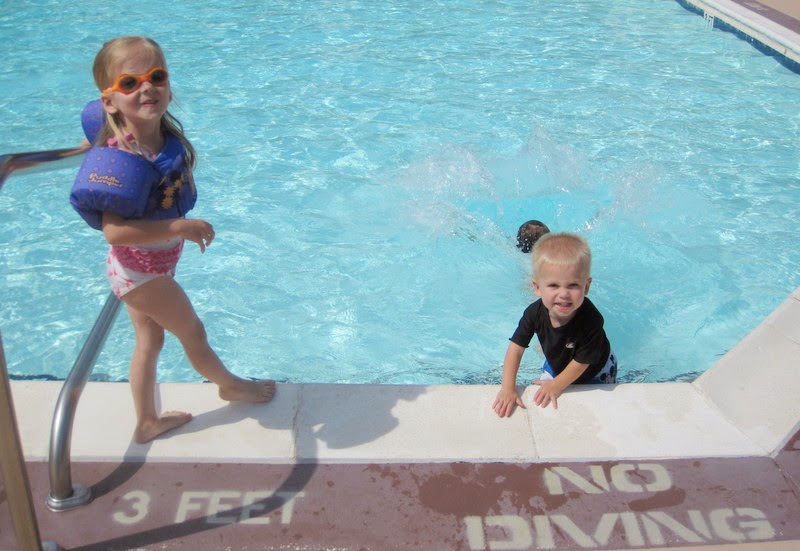 She jumped right into the pool and started paddling around just like that. No fussing, no screaming. 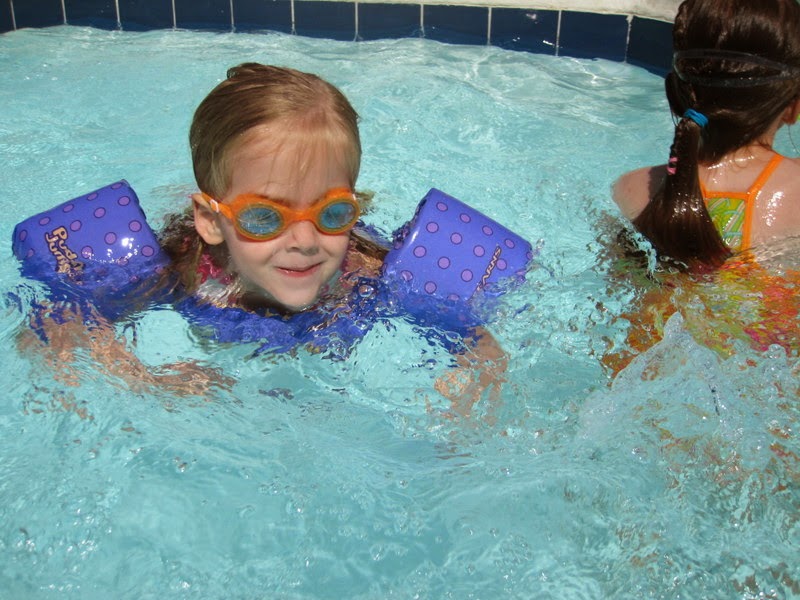 Today we didn't really do lessons, per se. I just wanted to give the kids a chance to explore the pool. Miriam will be doing lessons without the help of a personal flotation device. I think she's up for the challenge.

Rachel found her swimming skills a bit rusty. At first she said she was going to jump in the deep end but I told her to get in at the shallow end and swim around until she was sure she remembered what she was doing and then to jump in at the deep end. We haven't been swimming since October, so...

Benjamin was all over this swimming thing. He climbed right into the pool without hesitation. He kept begging me to put him down while we were swimming but eventually resigned himself to kicking and splashing and blowing bubbles from the safety of my arms. A couple of times he threatened to jump in from the side of the pool—once in the deep end. Fortunately, my friend Addi was there to catch him and haul him away from the edge.

The kids were surprised to find a grey tree frog clinging to the side of the pool. We just can't get away from frogs lately. 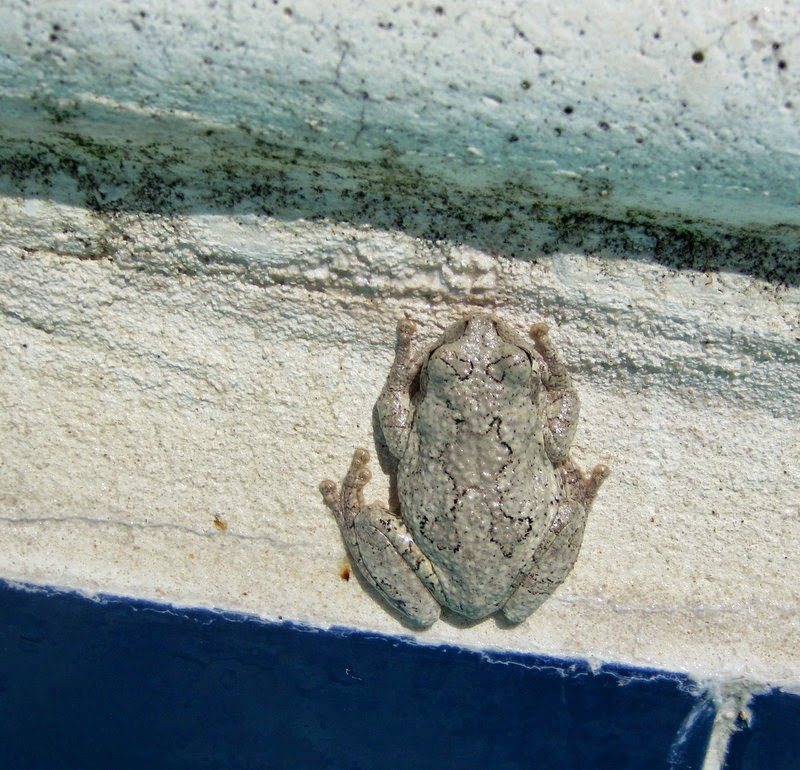 Rachel was rather grossed out when she realized she was swimming in the same water that the frog had touched. 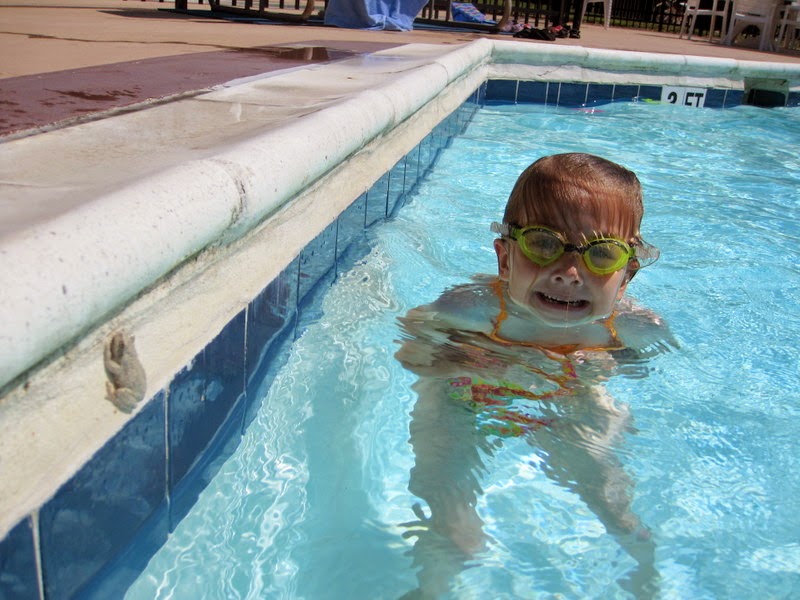 Benjamin was more worried about a moth (the same size of the frog) that was sitting on the deck beside him. 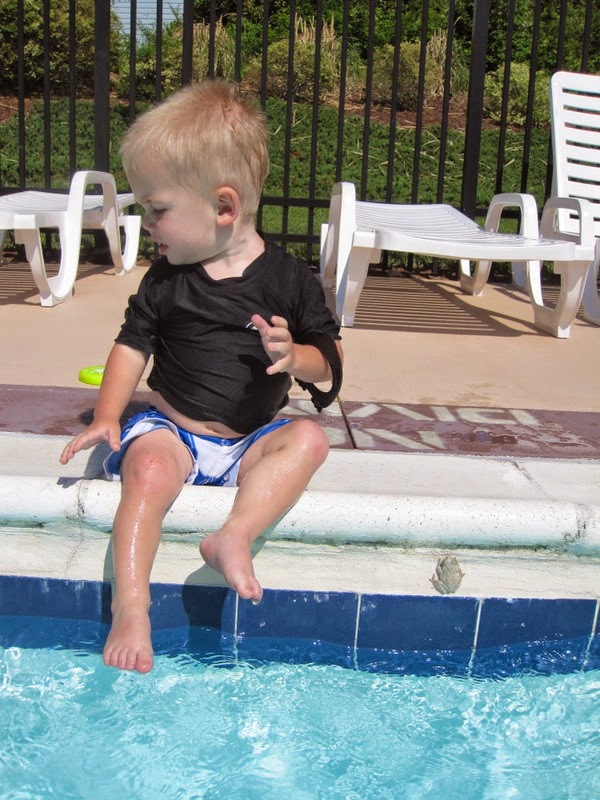 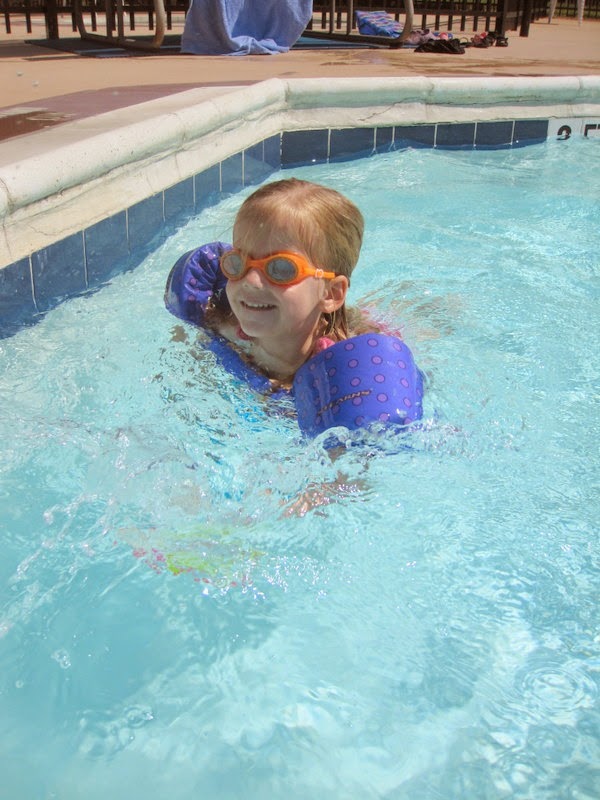 And a quick picture of me and Benjamin together. 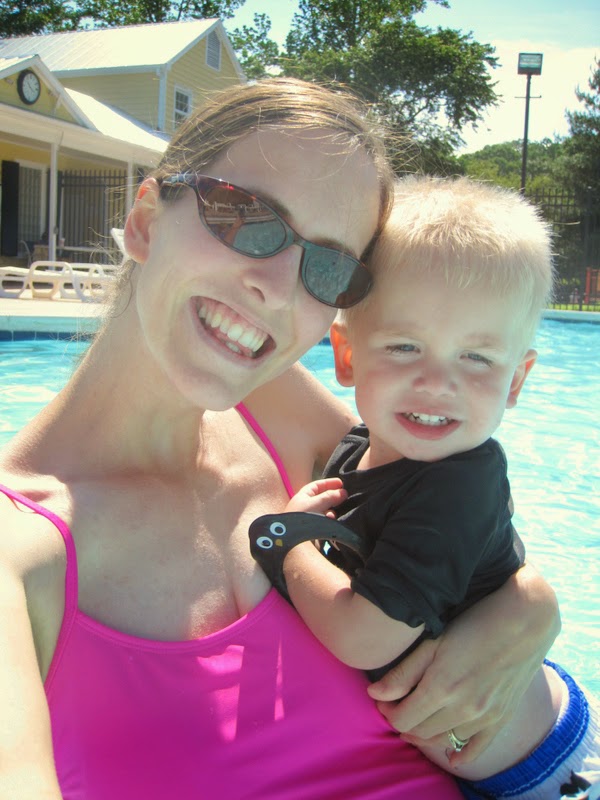 When the kids got too cold to enjoy the big pool they decided to check out the baby pool, which is usually a little warmer. 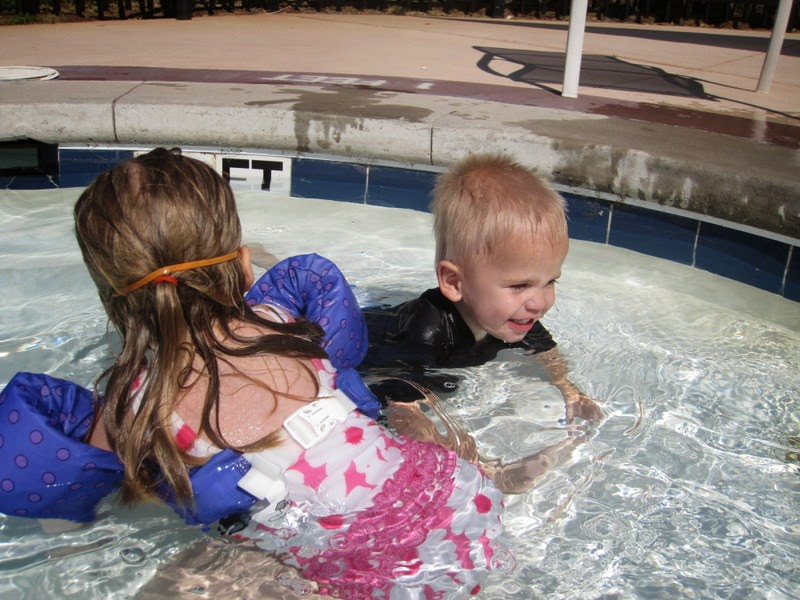 Benjamin thought it was awesome but the girls thought it was boring and sat on the deck moaning in their towels while I tried to convince Benjamin it was time to go. He was having way too much fun running around in circles to care about his shivering sisters. 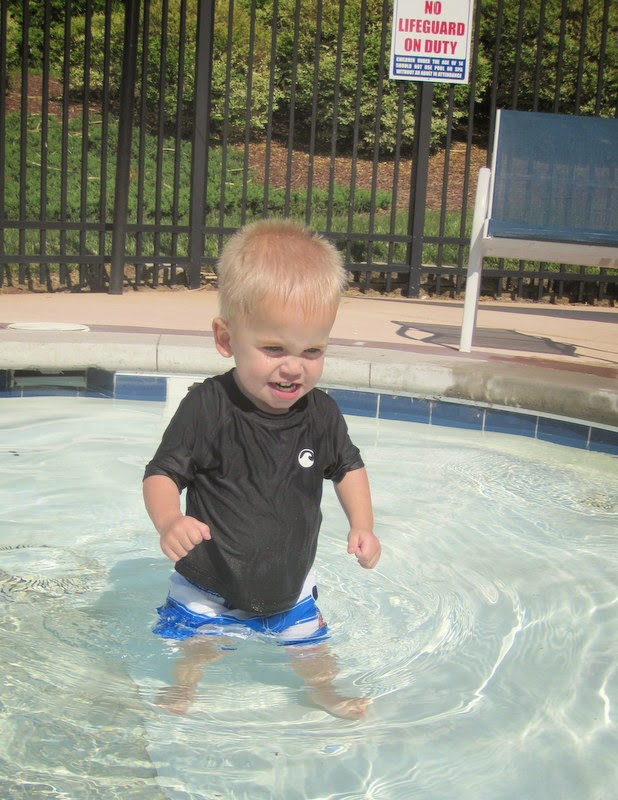 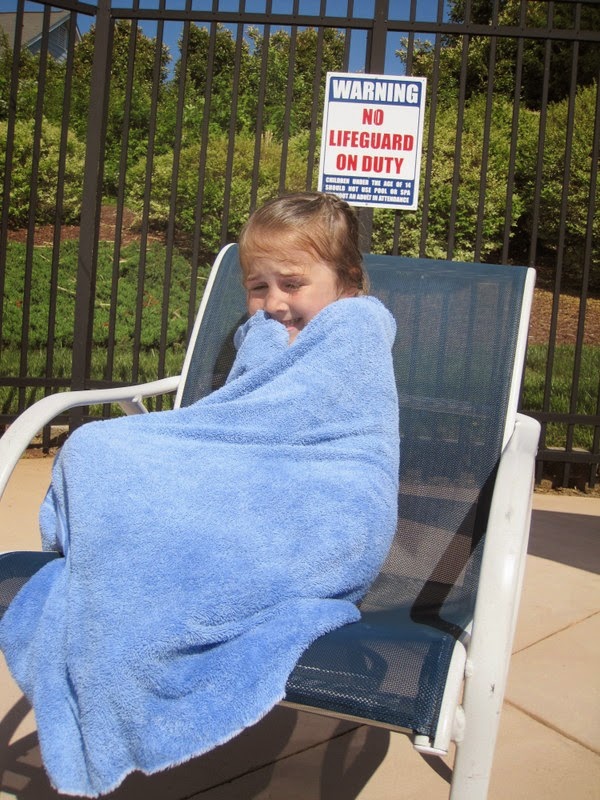 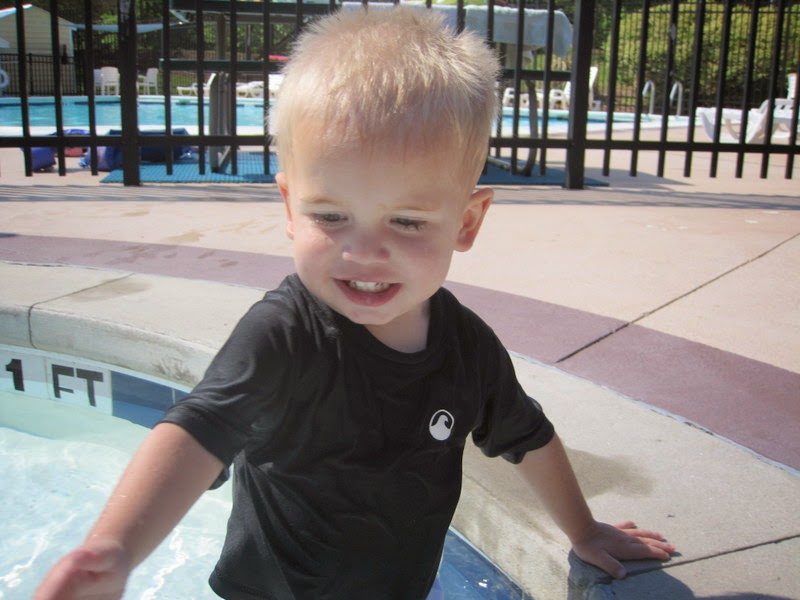 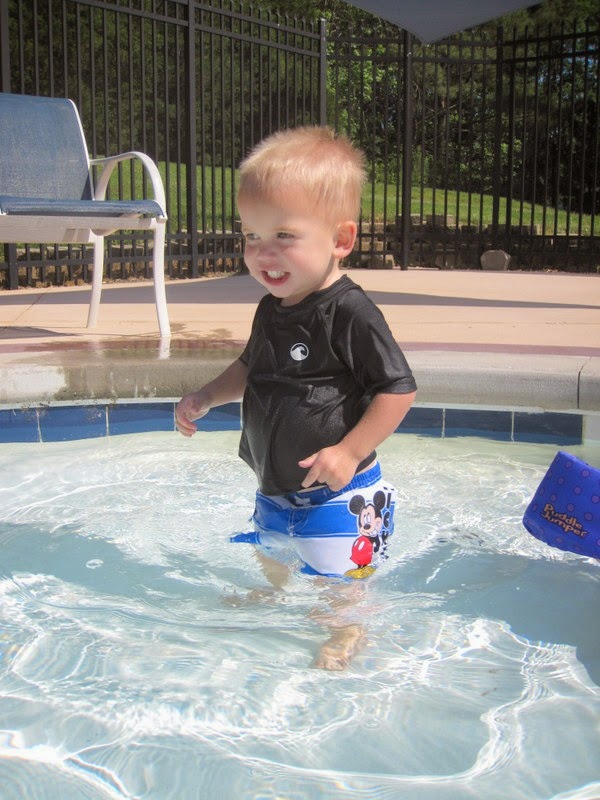 Finally I dragged him kicking and screaming from the pool. I wrapped him up in his towel and plopped him on a sun chair with his sisters while I went to pack up our things. 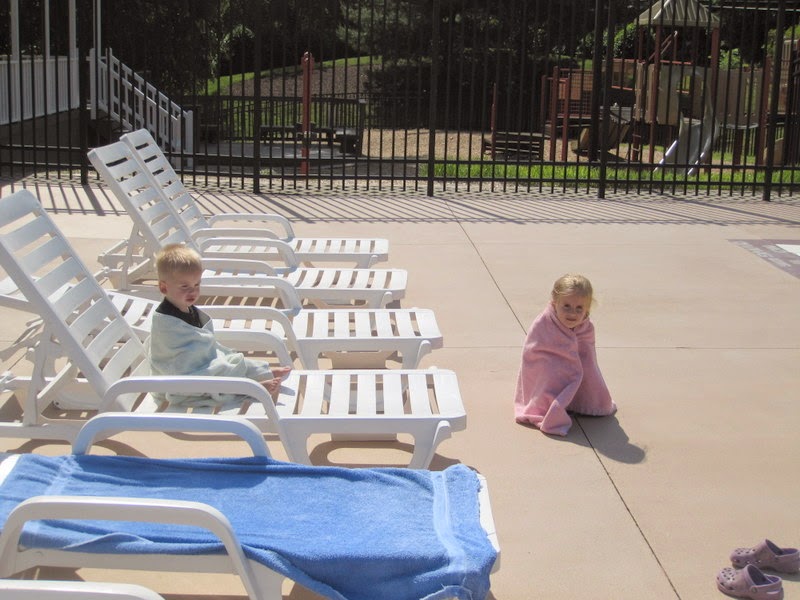 But then our neighbour Diego showed up and before I knew it he and Rachel had cannon-balled their way back into the pool. We were stuck for several more minutes while Rachel and Diego played around, leaving Benjamin and Miriam shivering on the deck and moaning about wanting to go home. 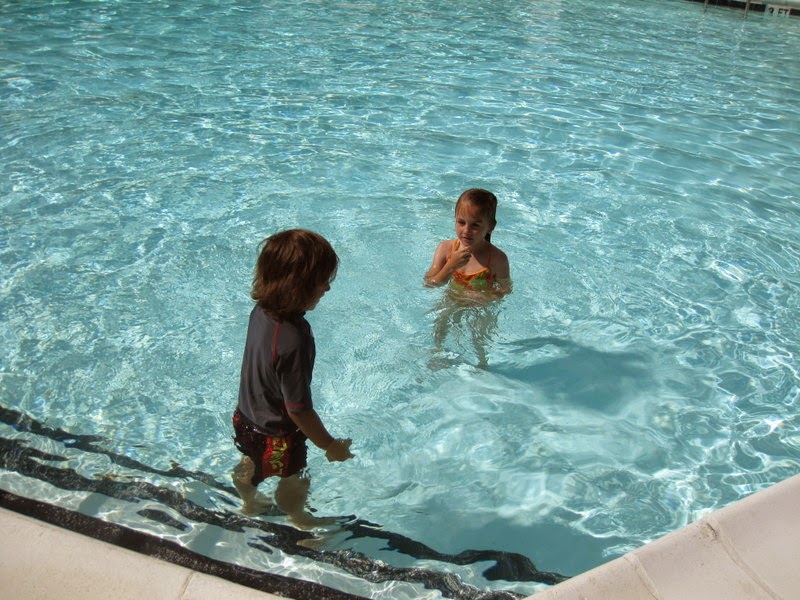 Poor Diego had run over to our house to see if the girls could play. Andrew told him that we were at the pool and Diego raced home to tell his mom he had some good news and some bad news. 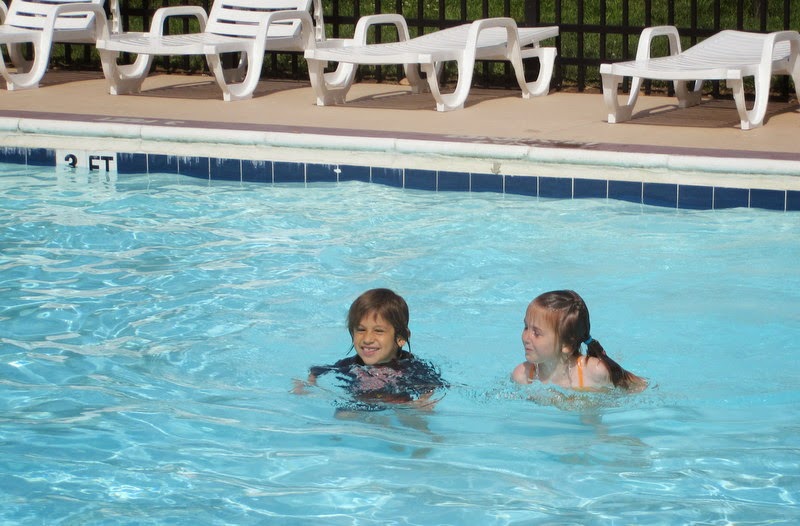 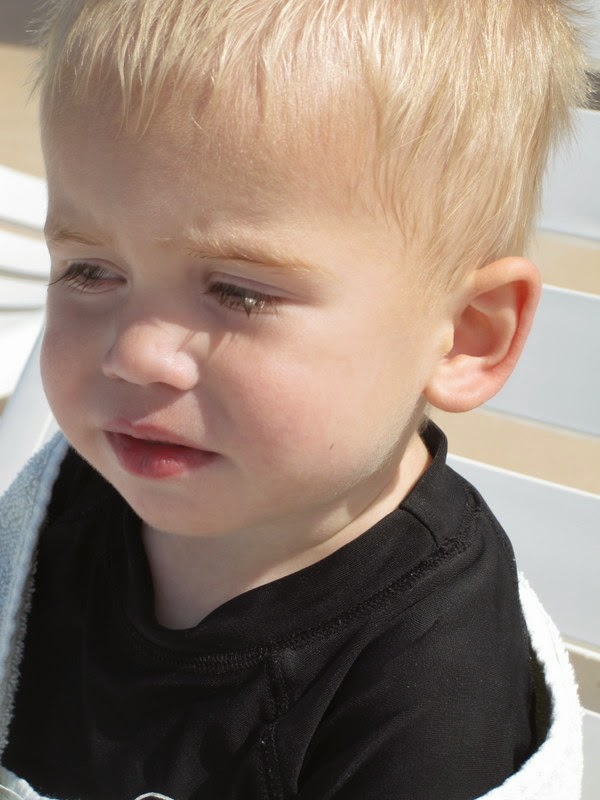 The water was cold enough that Diego decided he'd rather play outside in the sunshine with the girls than swim in the pool by himself, so we all dried off and went home. 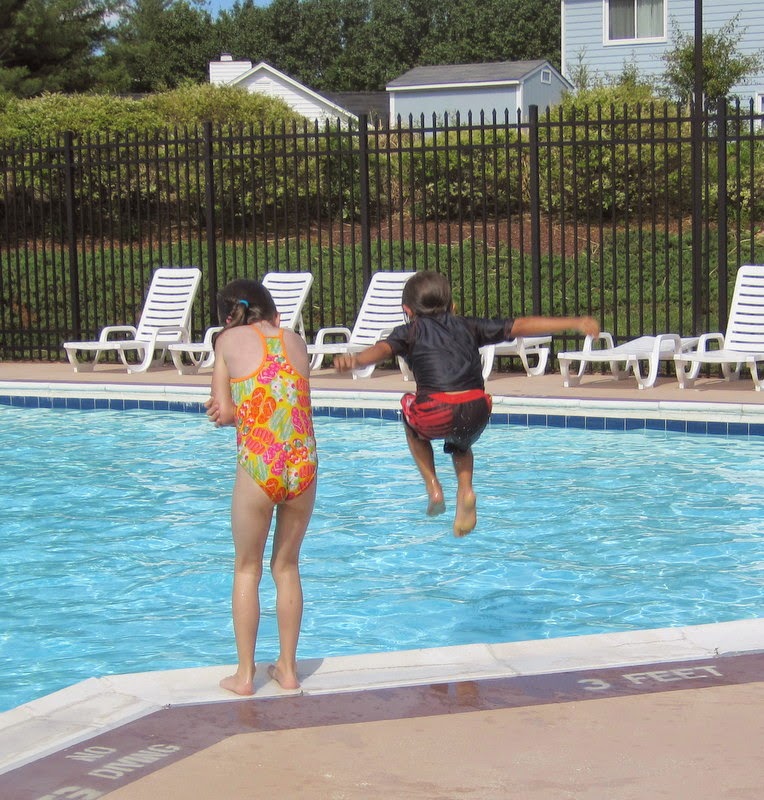 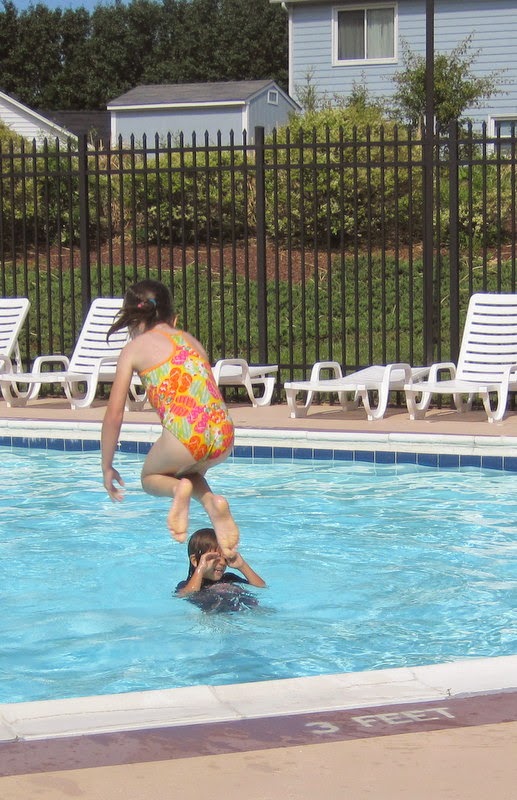 Oh, I should probably mention that Rachel rode her bike to the pool by herself (I was lazy and drove the other kids over) and she rode her bike home—ever so slowly so that Diego could walk beside her (while his mom drove behind them in case Diego got tired (he's been cancer-free for a few months now but is still trying to regain his stamina from his chemo treatments)).

Although today was lovely, we're certainly looking forward to some warmer pool days.
Posted by Nancy at 11:31 PM