Rachel experienced some gastrointestinal distress while we were camping. I'm not sure what caused it, precisely, but I did hear her muttering to herself on one of her many trips to the bathhouse, "I shouldn't have had that seventh s'more..."

I had my hands too full of keeping Benjamin from diving into the fire pit to enforce dessert limits.

Honestly, I've never really been one to enforce dessert limits at all. Nature is often a better teacher than I am and it beautifully—if painfully—managed to teach Rachel why you should only ever eat six s'mores in one go and never seven without my saying anything.

As often as Rachel went to the bathroom you'd think she'd have been able to remember where it was—proximity to restrooms is one of my top criteria when selecting a campsite so we were pretty close to it—but every single time she got up to go to the bathroom she'd stalk off in completely the wrong direction.

"Where are you going?" I would ask her.

"It's over there," I'd say, pointing her in the right direction.

Probably around the fifth time this happened I turned to Andrew and said, "I guess she inherited my sense of direction."

He laughed because I am hopeless. In fact, I'm pretty sure I was born without a sense of direction.

He's always quizzing me in the car: "Do you know where we are?"

Usually I don't. I still rely heavily on Ginny, our GPS, to get me anywhere. I don't know what people did before them. I, for one, probably would have spent a lot more time lost and crying than I do in this blessed age. Also, I can't wait for cars that drive themselves. Yes, please!

Anyway, Miriam ate only a manageable number of s'mores and didn't end up with a tummy ache so she should have been less familiar of the whereabouts of the bathroom than Rachel was. She asked if she could go to the bathroom and I told her that she could. We could see the bathhouse from our campsite so I was willing to let her go on her own but Rachel, ever needful of the toilet, quickly volunteered to go with her.

"I'll go with you!" she said eagerly.

Then they split up and ran off in opposite directions. Miriam immediately hopped on the path leading to the bathhouse while Rachel dashed off into a grove of trees separating our campsite from our neighbours.

"Looks like Miriam inherited my sense of direction," Andrew laughed with superiority.


His sense of direction is far superior to mine—to the point that he coddles me over it.

Today Miriam, Benjamin, and I joined Andrew in a lunchtime picnic with some of his colleagues (Andrew thinks that term sounds pretentious but when Miriam asked who we were having lunch with I couldn't come up with a better word—Andrew's so far along in his career (going to school is a completely legitimate career, guys) that I think colleague sounds about right). Andrew drove in front of me the whole way to campus—him on the scooter, us in the van—and showed me where the parking lot was. Then he made sure that I knew exactly where to meet him before he left me to go park his scooter (they're treated like bikes here so you can drive them right up to your building and leave them at the bike rack), not that it would have mattered because I probably would have eventually found my way. Duke's a loop...maybe.

We were able to meet up with him just fine and had a lovely lunch, reveling in tales of childhoods in German villages and farmhouses in Iowa, among other stories. It was quite enjoyable to get out of the house for lunch (even if I spent most of my time making sure Benjamin hadn't fallen into the nearby fountain).

After lunch the kids wanted to look at the flowers and fish some more so Andrew made sure I knew how to get back to the car and then headed to his office.

I tried to get a picture of the kids together but, uh...they weren't that interested. 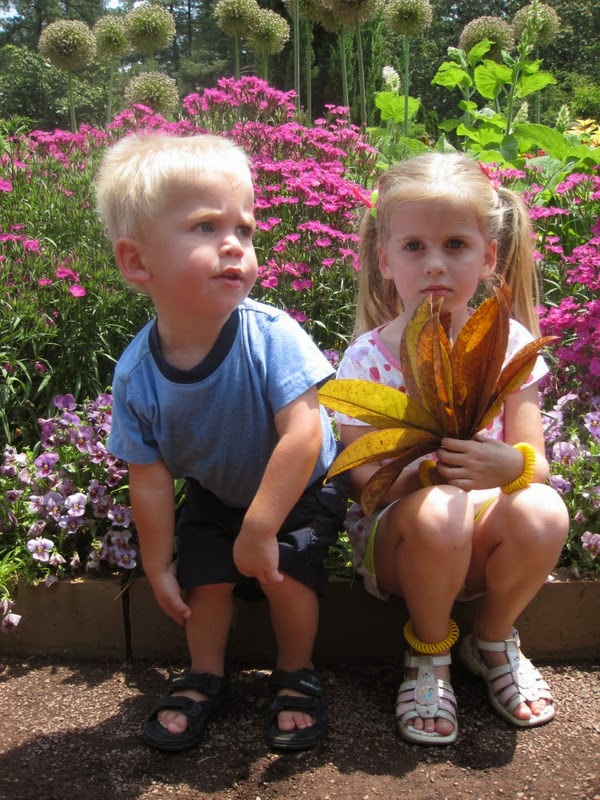 Miriam was interested in getting a shot alone, with her leaf collection (a stranger walking by commented on her "lovely bouquet" and she pouted to me that it wasn't a bouquet because it had no flowers—it was only a leaf collection): 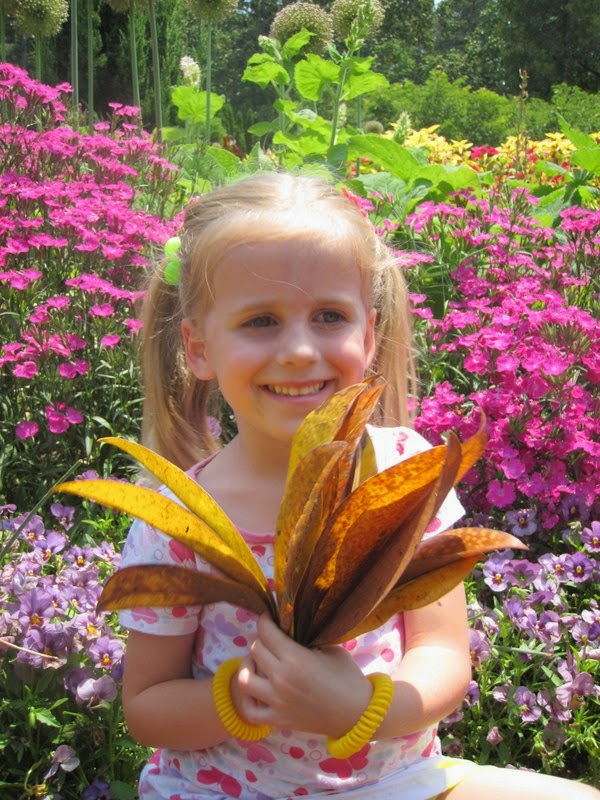 Benjamin wasn't interested in pausing for pictures at all: 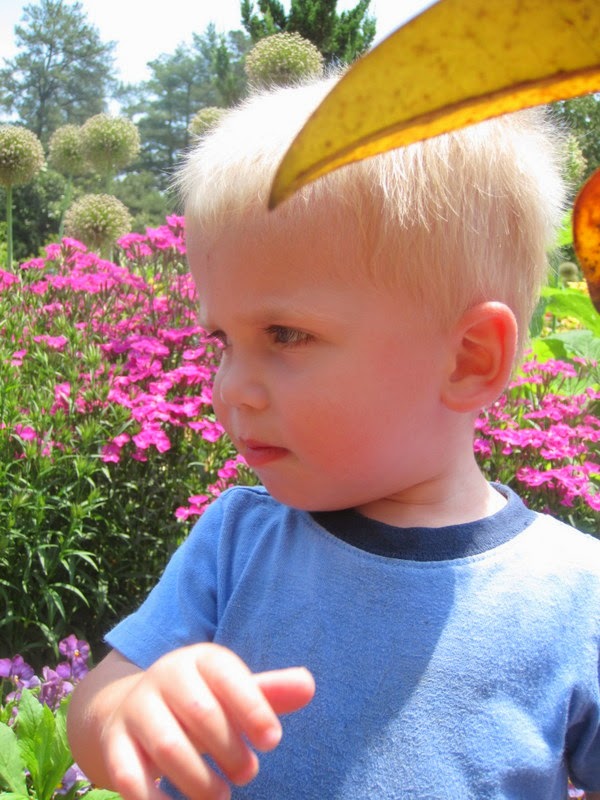 He was, however, quite interested in the fish (I think the feeling was mutual): 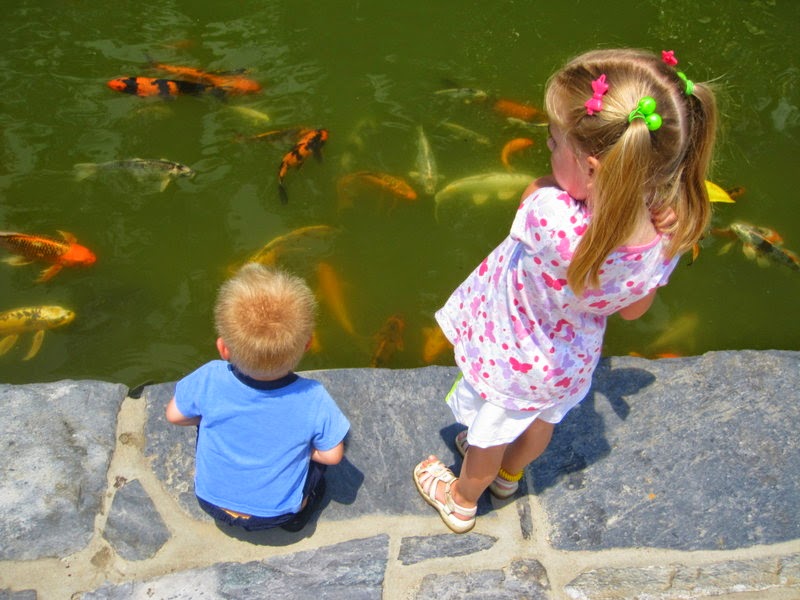 Benjamin insisted on walking the whole way from the gardens to the parking lot so it took us a considerable amount of time to make it to the car. When we got there we found that someone had parked ridiculously close to us and after attempting to back out a few times I gave up and texted Andrew, who came scootering to the rescue. He reversed the car for me so that I could get home.

Pathetic, I know. But seriously—when are those self-driving cars going to be available?
Posted by Nancy at 10:41 PM