I just finished reading The Hobbit for the first time.

I avoided reading it for several years (like my entire life up to this point) because I cannot think of The Hobbit without thinking of this:

I don't recall ever watching this movie (though it's possible that I did) but I think we had a record of this when I was growing up. I don't know how often we listened to it but Glenn Yarbrough's strong vibrato has been reverberating through my brain for, literally, decades.

"The greatest adventure is what lies ahead!"

It's not a terrible song but I it always creeped me out as a child. I think it was the combination of the vibrato and the grotesque-looking characters on the trippy album cover that did it (my apologies to the artist). 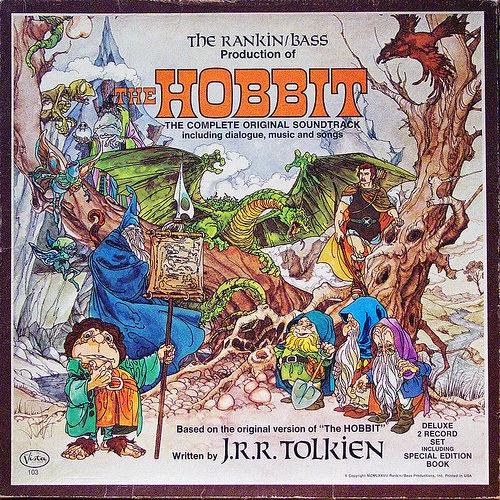 Bilbo and the dwarves just didn't seem to be the kind of guy I wanted to read a story about. They were too different from the friendly seven dwarves of Snow White for me.


My brother David read it The Hobbit grade six and talked about it all the time. He even made a board game of the journey, I think, for a class project. I knew all about Smaug and Bilbo, though I'd never even cracked the cover of the book, myself. My class read Charlie and the Chocolate Factory that year at an annoyingly slow pace so I was always eager to find out what David was learning about.

I seem to recall a lot about what David learned in school, actually. It's as if being under his tutelage helped stave off the boredom that could have stifled my mind in those growing up years.

He did a unit on Greek mythology that same year and for years after my top choices for girl names were Athena and Persephone. I'm pretty sure Andrew's glad I grew out of that stage before we had daughters to name.

Anyway, I continued to avoid reading The Hobbit for several more years after that (like almost twenty). I did pick it up when I lived in Russia and tried to read it but gave it up in order to read the books everyone else was reading so we could talk about them together. Besides, the beginning is a little slow (though I simply loved what they did with the "That's what Bilbo Baggins hates!" song in the movie).

I especially had no desire to read it after The Lord of the Rings movies came out (I haven't read those books yet either) because the movies are simply, like Star Wars, too "pew-pew-pew" for my taste. I don't enjoy watching battles and I don't enjoy reading about battles so I didn't think The Hobbit would really be up my alley.

But Andrew wanted to watch The Hobbit together and since I already watched/slept through The Lord of the Rings I figured it couldn't hurt. So I watched it with him (the first two parts, anyway) and it was too pew-pew-pew but we also weren't able to finish the story because the third part of the movie series isn't out yet (at all—I'm not sure they're even finished filming it or if they've even begun filming) so I picked up the book and read it.

It wasn't my favourite story, but it was good. And there's far less violence in the book than what was shown in the movies, I think. Although I don't like reading about battles either so I skimmed a lot of those parts (but that only made the story go faster).

Sorry—not sorry—but battles are so boring (and gruesome). For example, "and then so-and-so slung a stone at so-and-so, who chopped off their head in return but then they got run through with a spear which they then pulled out and skewered five dwarves with before collapsing and dropping the dwarves who fell on a bunch of goblins on the bridge and the bridge collapsed and they fell down onto the rocks below and then were eaten by a strange creature with big eyes who speaks to itself."

Did you enjoy reading that at all? Me neither.

Basically, there was a battle. Who cares? Not me. Let's move on.

The movie, of course, expanded the whole goblin thing to last through all three movies, which increased the violence tenfold (okay—that part where the elves are battling the goblins along the river? Give me a break. I was groaning inside (and maybe outside as well)) when really there was one battle near the beginning of the journey and one at the end. But it does make more movie-sense to have that hunt continue through all three movies, I suppose.

Anyway, I will admit that I was a little sad about Thorin's death. He's grumpy but seems a decent fellow—I hate that he dies. And perhaps here, J.R.R. Tolkien could say (à la mode of Princess Bride): "He was a decent fellow. I hated to kill him."

We'll see what the movies do with that because we haven't yet really seen him turn all greedy and nasty yet like he does in the book.

Other than that I liked the idea of a quiet hobbit setting out on a grand adventure. At the end when he finally catches a glimpse of his home and instead of being relieved and overjoyed to be home immediately begins to mourn the journey really spoke to me. I think as people we often look forward to some grand (or at least cozy) ending—we keep picturing that comfy chair by the fire—when what we really need to focus on is finding joy in the journey because that's what life is.

I think Gandalf (or as my father-in-law likes to say Gandlaf) is my favourite character— he's both sagacious and humorous and I really missed him while he was off doing his own thing, though I did appreciate the opportunity for Bilbo to be independent.

"My dear Bilbo! Something is the matter with you! You are not the hobbit that you were," is a line of Gandalf's that I think I will adopt to use on my children when they surprise me by acting grown up.

Like the times Miriam goes on a cleaning frenzy (like today, which was lovely). Or when Rachel choses to change her attitude from a bad-itude to a glad-ittude.

It also might be a line Andrew would use to describe his surprise when he saw me reading a fantasy novel.

I'm not strictly a historical fiction fan, though it is my default "favourite" genre. I mean, for years one of my favourite books was Ella Enchanted. I do tend to enjoy stories about everyday adventures: Anne of Green Gables or The Little House on the Prairie. I think that's because I have a difficult time suspending disbelief long enough to accept ogres as a plausible foe. But I've read plenty of fantasy in my time anyway, though evidently not enough in front of Andrew.

Although it was an enjoyable read, I'm not sure it will make it into our read-aloud repertoire (we just finished The Phantom Tollbooth) though I'm sure the children will be encouraged to read it (Andrew's already suggested it to Rachel several times though she's yet to pick it up (she's working her way through The Little House on the Prairie again)).
Posted by Nancy at 11:30 PM