When we moved out here we didn't ever think we'd host a mini-family reunion in our living room. That was before this afternoon when, due to many different circumstances (a graduation, a move, medical issues, and a vacation), we ended up with six relatives in our living room! Using two folding chairs and our horribly worn (but wonderfully comfortable) rocking chair we were able to come up with a place for everyone.

Here's a picture of Andrew (right) with his cousins Daniel (middle) and Scott (left): 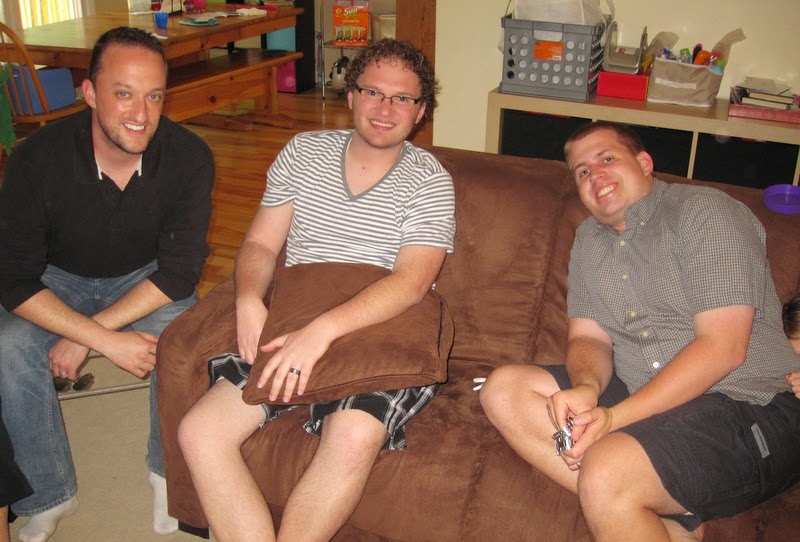 Scott actually lives in The Triangle. He's our closest relative, distance-wise, though we haven't been great about getting together. We'll have to do better.

Daniel has been in Florida where his wife was studying to become a physician's assistant. She just graduated and they'll be moving back to Arizona.

Aunt Marcie (middle) flew out to Florida to help with the move and everything. Aunt Lynnea (right) came out with Uncle Clark to visit Scott and Angel (left). Their trip just happened to coincide with when Marcie and Daniel were going to be here (for medical stuff). 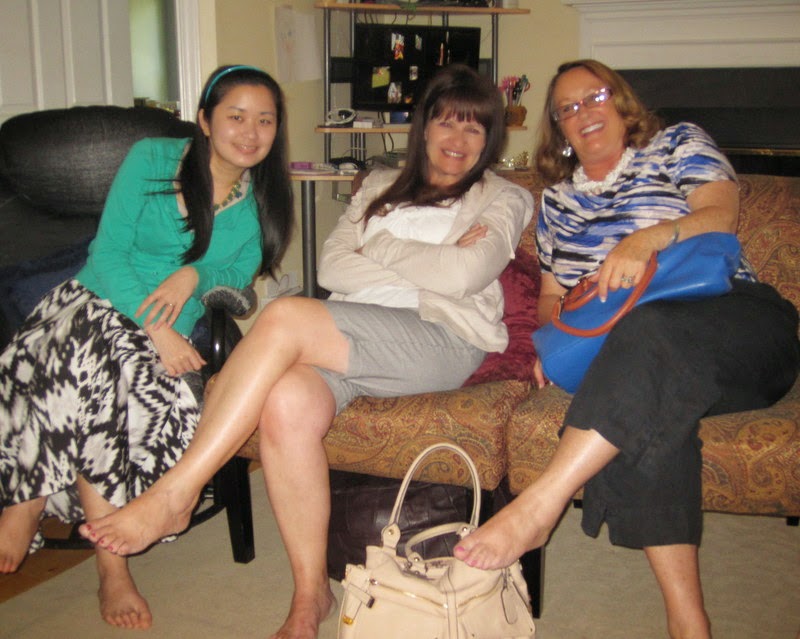 So that's how our living room ended up full of good conversation and laughter this afternoon.

Benjamin and Miriam were both terribly shy at first. But they warmed up to Uncle Clark pretty fast. 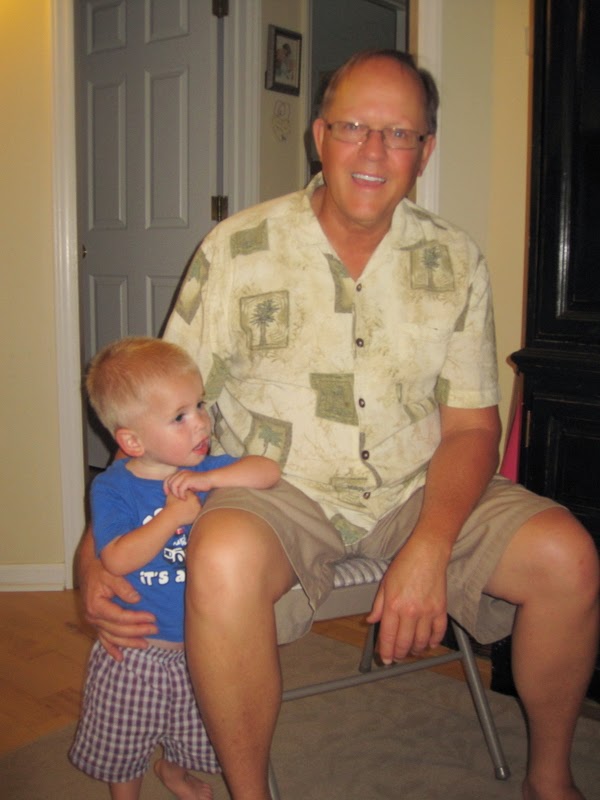 Clark gave Benjamin his watch to play with and later, when Benjamin was feeling awfully brave, he went up to Daniel and demanded that he give him his watch also. So he wandered around with two gigantic watches on his arms. 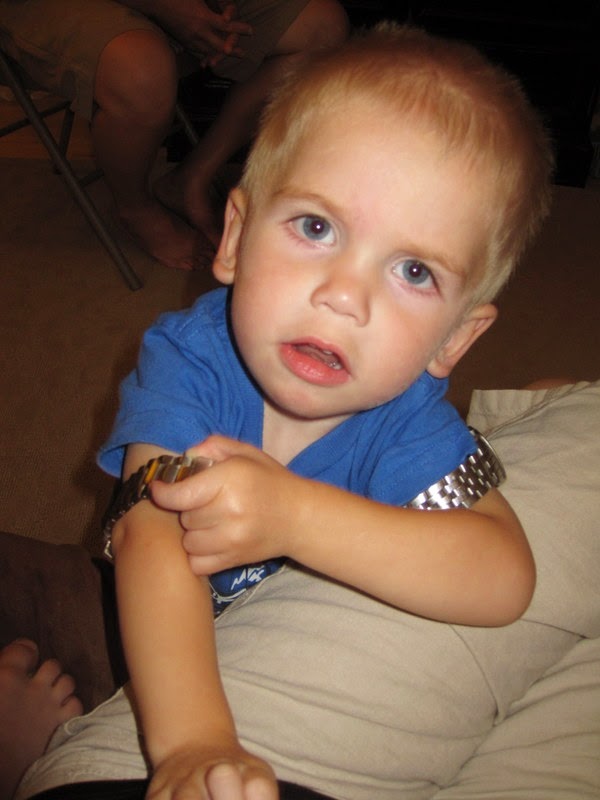 Everyone remarked on how tiny Benjamin is. Marcie's got a grandson about five weeks younger than Benjamin (Andrew's cousin Therena and I were due within days of each other). When Tolson was born he was already twice the size of Benjamin at birth (not that that's difficult) and he's kept on growing at that rate. He's twice Benjamin's size now, so while Benjamin may be a little on the small side, Tolson's a little on the large side.

Rumor has it he weighs 40 lbs.

Benjamin's lucky to tip the scale at 20 lbs. Sometimes he does, sometimes he doesn't. But always when people ask me how old he is and then say something like, "Wow! He's so big for his age!" I give them a funny look that says, "Have you ever seen a child his age?" because when I get him ready for bed at night... 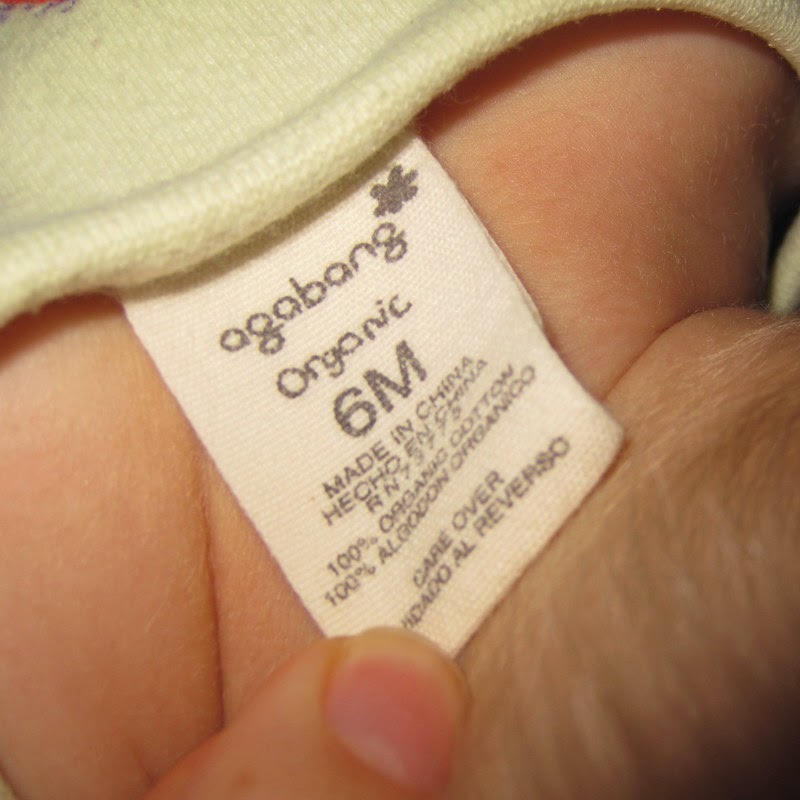 ...it's all too clear that he's not big for a two-year-old. Though he can also wear 12 month clothes quite comfortably now. Eighteen months is usually pushing the limits. 2T makes him look like he's drowning.

Rachel, by the way, missed a good hour of the visit but was lucky enough to come home from school in time to (re)meet everyone. She didn't remember anyone. But she hasn't seen any of them for at least two years (and probably longer). She was a little shy, too, though when she first got off the bus she said, "Is everybody here?!" and seemed rather excited.

As the conversation rolled on, it was pretty amazing to see how much has changed since Andrew and I first got married eight (and a half) years ago. We had to fill the aunts and uncle and cousins in on all of Andrew's siblings.

Katharine has been married for seven (and a half) years. She's working on becoming a math teacher, which I think is an excellent path for her. She's got one son who is six (and a half) years old. Her husband has had a steady job for several years now, laying fiber-optic cable for an internet company.

Sarah has been married for just about four years. She recently landed a job teaching history and ballroom dancing in a local high school, which I hope she really loves. It sounds like the perfect job for her. Her husband recently graduated from the police academy and has been enjoying being on the force. They recently bought their first house and got a kitten to go with it.

Emily has been married for about three (and a half) years. She's finishing up her student teaching this month in music education. Her husband is a stay-at-home dad to their new little baby and their dog, Sadie. They're currently living with Andrew's parents but will hopefully be leaving for a full-time teaching position in the near future.

Jacob has been married for about a year and a half now. He's got a full-time job (while also working on a degree in graphic design, if I'm not mistaken, part-time) and his wife started teaching at a high school this year as well (lots of teachers in the family). They recently moved into their first home...and got a kitty to go with it.

And then there's us: Eight (and a half) years of marriage. Three kids. Three (and a half) graduate degrees. Odd jobs. No house to call our own.

We certainly took the road less traveled by. Or at least, you know, the long and dreary road. Let me repeat: long and dreary. I mean...uh...grad school is awesome. We'll reach the finish line eventually, right? (RIGHT?!?!!)

But really, look how much has changed in just one short decade! Ten years ago none of us were married. And there weren't five little grandchildren running around. And none of us had an education or job to speak of.

Relationships have been strained and repaired.
Milestones have been celebrated.
Trials have been overcome.

We've all grown older. We've done things that have surprised each other.

Andrew drives a scooter (much to his mother's displeasure) and moved his family to Egypt once.
Katharine decided to major in math (much to Andrew's shock) and is doing very well in school.
Sarah allowed her husband to choose their wedding colours (blue instead of pink, really?!).
Emily moved to the Middle-Of-Nowhere, Idaho, and became a dog-owner (how nice of her).
Jacob bought a house (Andrew and I didn't see that coming quite so soon—very impressive).

I recently read Letters to a Young Mormon (which was fabulous—I'd recommend it, Mormon or not). At the very end of the book the author, Adam S. Miller, talks about eternal life:

If your life seems too small and too weak to manage such a thing, you're not a lone. But, in the end, that's the point: you're not alone.

...you are never quite done and never quite your own.... Life itself depends on your filling and being filled with lives that are not your own.

Here Miller states that marriage is an example of this. Eternal families—a marriage sealed in heaven for time and all eternity—is an important part of our theology. It's nearly impossible to talk about eternal life without bringing up marriage and families as a Mormon. So, while this passage relates to marriage, I can see the truth of it in all our close relationships (which Miller admits on the next page):


You'll grow close, but the differences will remain. Things about [the person] that used to be strange will become familiar, and things about them that used to be familiar will become strange. The person you love will always be, in part, a mystery.... If your love lasts, it will last because, instead of running from this strangeness, you share it.

Anyway, when our conversation devolved into showing off tongue tricks (glad to know Andrew's family does this too—it's not just mine!) Uncle Clark looked at Andrew and said, "This is getting a little weird..." we decided it was probably time to call it a day.

So, first we shared our strangeness...and then we ran from it. What does that say about our relationships?

I'm getting old enough that time is getting all wibbly-wobbly on me. Was that one year ago? I wonder. Or seven? I just can't keep my timeline straight, which is something I never thought possible. I used to wonder why my mom ever had to ask me my birth year. Or why she sometimes had to calculate her own age. I'm starting to understand those glitches now. Just barely. I'm sure in another decade I'll develop even more compassion. Sometimes there are too many memories to sift through.

I was glad to add another one to the bank today. Thanks for visiting, family! It was fun to catch up on all the cousins!
Posted by Nancy at 11:36 PM