Last Thursday we managed to get out of the house in time to get Rachel to school before the bell. This was a monumental accomplishment celebrated by finishing breakfast and doing Miriam's hair in the school parking lot before heading into Rachel's school ourselves. I may have looked a bit frazzled when I walked into the classroom.

"Is everything alright?" Mrs. M., the assistant teacher asked. "Is Benjamin okay? You look...harried."

"Oh, Benjamin's fine," I said, brushing my hand across his forehead. "He tripped on the driveway yesterday and bumped his head, but he's fine. And I'm...well...what time is it? 9:15? I'm already ready for a nap."

On top of that, the girls have been having nightmares. Miriam's come running into our room every night for the past several nights (sometimes more than once) and the past couple of days Rachel's been up with nightmares as well.

Our children must really, really think our family is big enough.

I know that this, too, shall pass. And eventually we'll all start sleeping again. But yesterday morning at 9:15 I was exhausted. And I had three hours of Field Day in front of me.

The children went around with one-half of their class. The other half of the class was a separate "team," if team is the word for it. This was not a competitive field day. There were no ribbons. There was no tallying of the score. There was no cross-grade pollination. It seemed very...clean.

They sent a message home regarding proper attire for the day—closed-toe running shoes, no skirts, etc., etc.—but I'm not sure that was entirely necessary. I don't think the kids did much running at all.

There was no tug-of-war, no three-legged race, no dash across the field to see who could be the fastest, no obstacle course. They did have some stations I could see being part of my childhood field day (some lacrosse wiffle ball, a parachute, and a cute relay race activity using pieces of gutter to transport tennis balls) but they also had several stations that seemed a little too unsportish to be part of a field day (walking tag (don't go too fast—you'll get hurt!), bubble blowing (what the?!), stand in a circle and squirt your neighbour (yeah)).

I suppose they just wanted it to be fun for everyone. And the stationed were planned and manned by the grade five class, so that's to their credit, I suppose. I was glad, however, to see that my friend Amanda's school had a more "traditional" field day, with classes competing against each other. She—the school librarian—had her trash kicked by a boy in grade eight when they went head to head at the obstacle course. Not all field days are as sterile as ours.

And I suppose I should just be happy we had one at all since at Rachel's last school...ahem...they cancelled field day due to rain and then never bothered to make it up.

Here are some pictures of the kids enjoying their day. I volunteered to help out and Miriam and Benjamin tagged along. 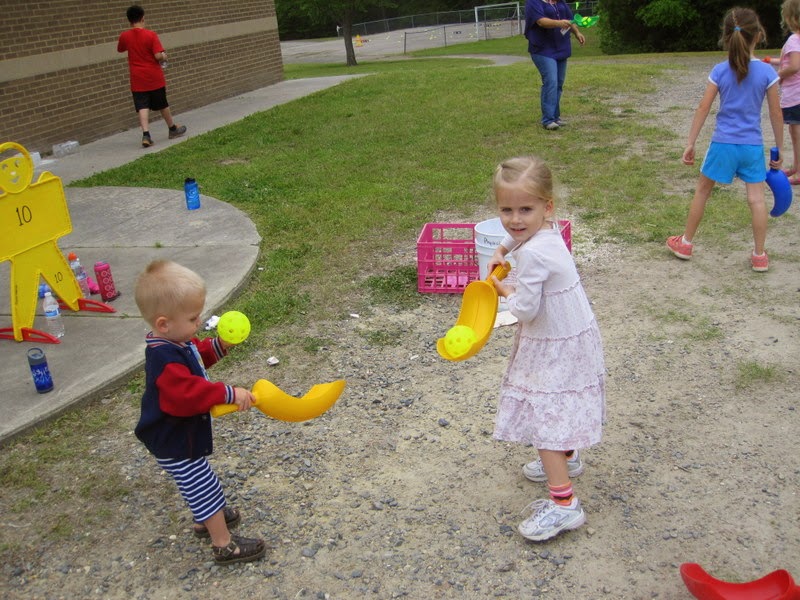 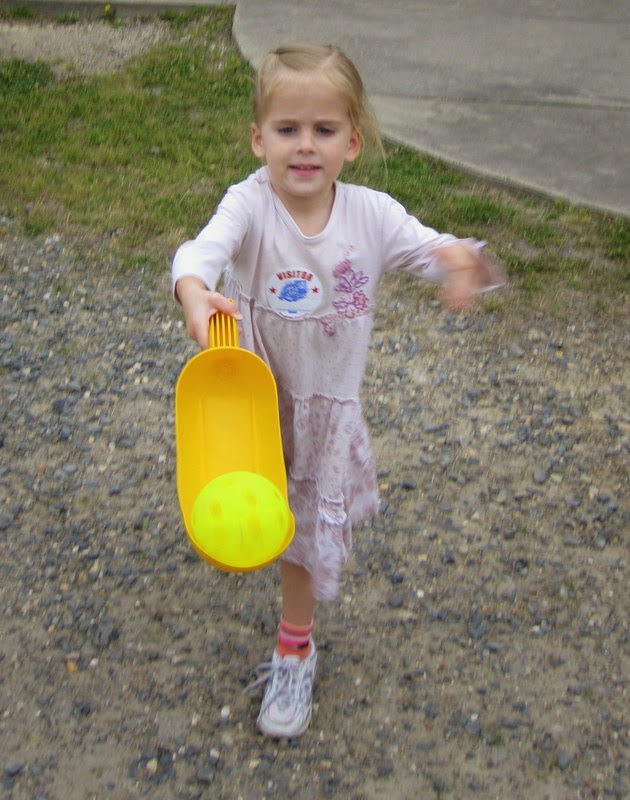 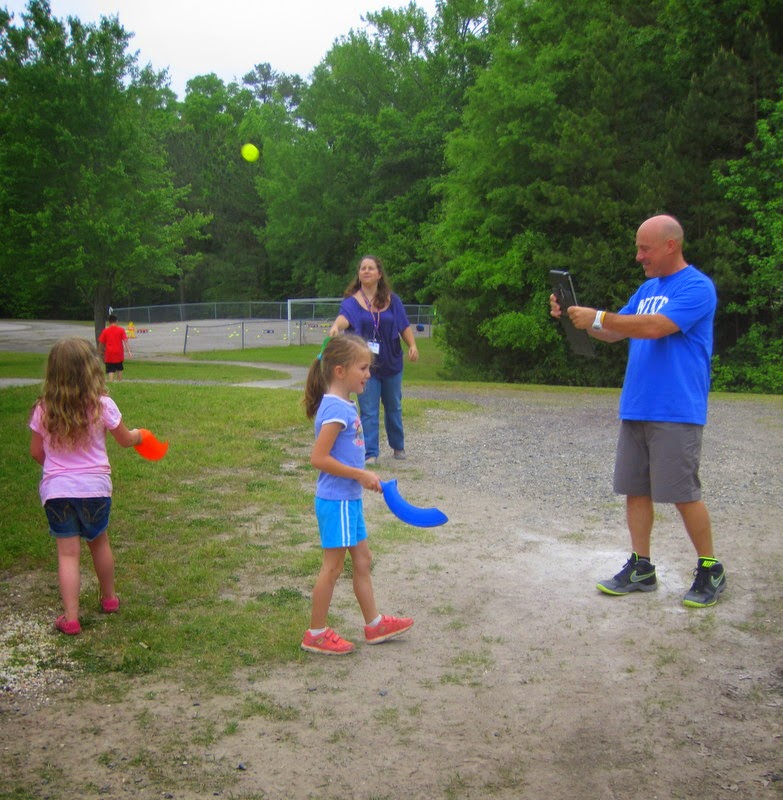 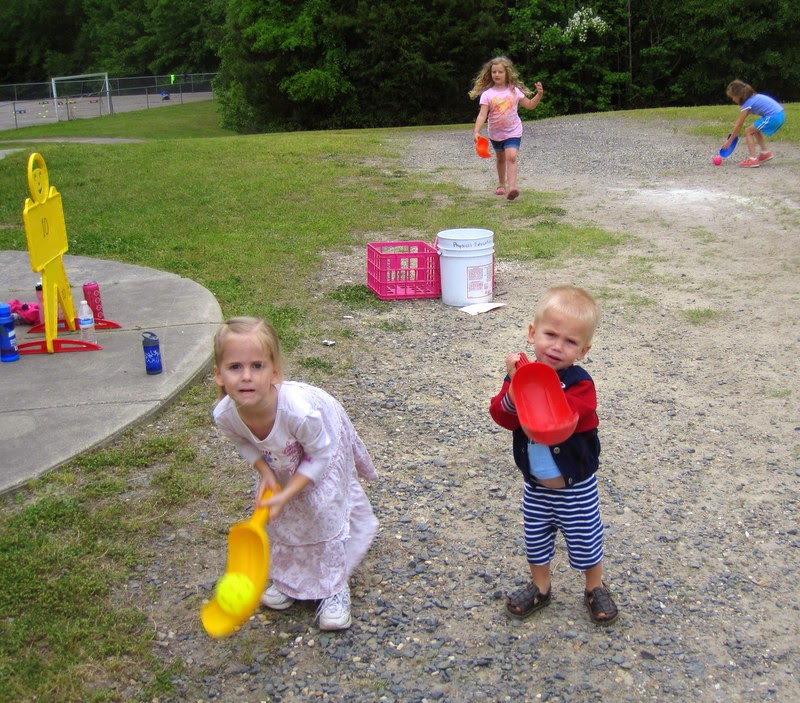 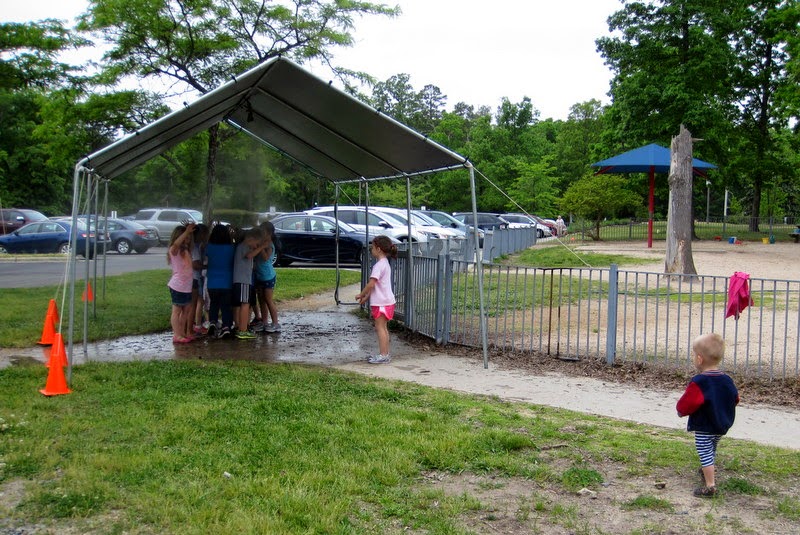 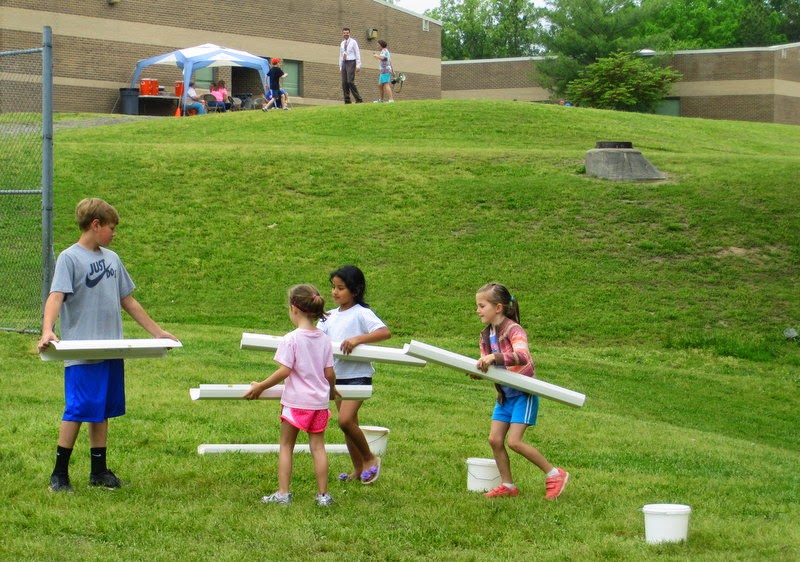 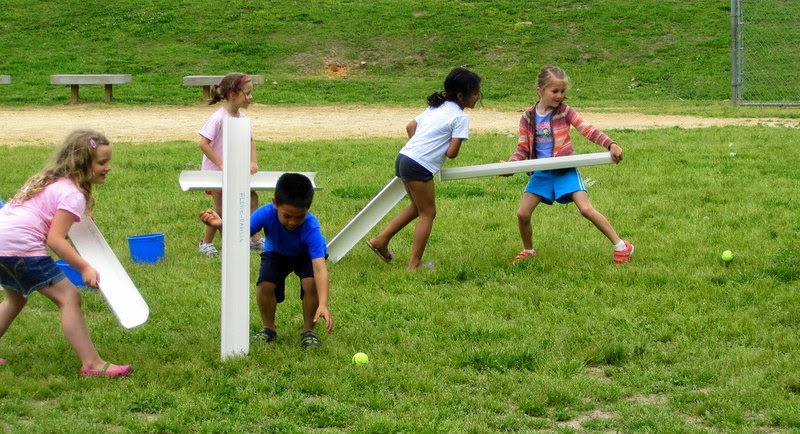 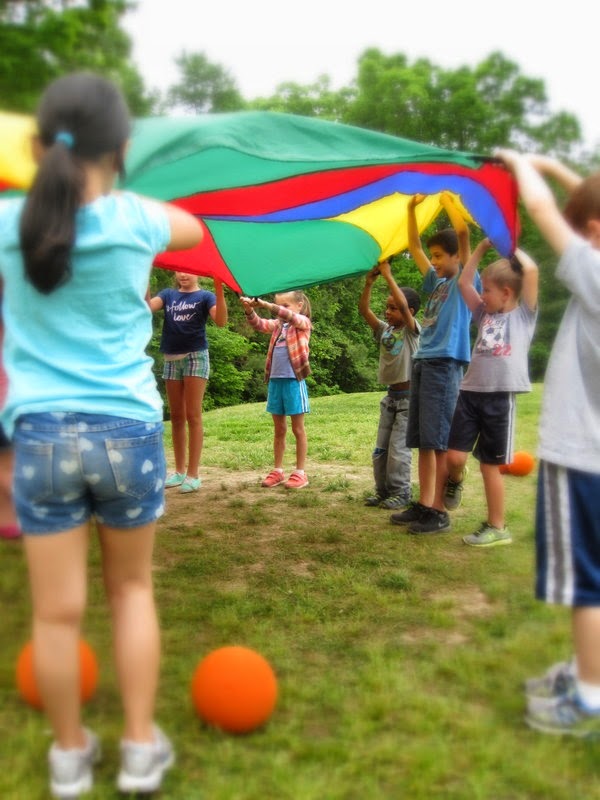 Throwing a chicken through a hoop: 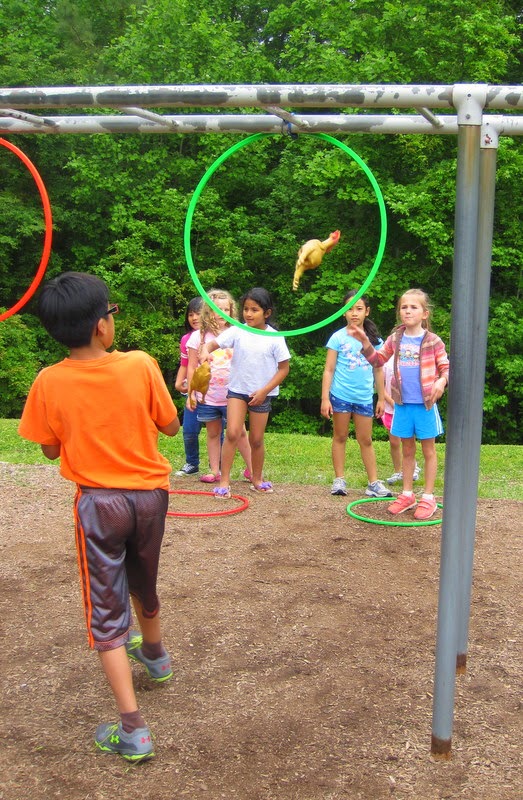 Rachel gliding around on the gym scooters with Kiara and Karmina: 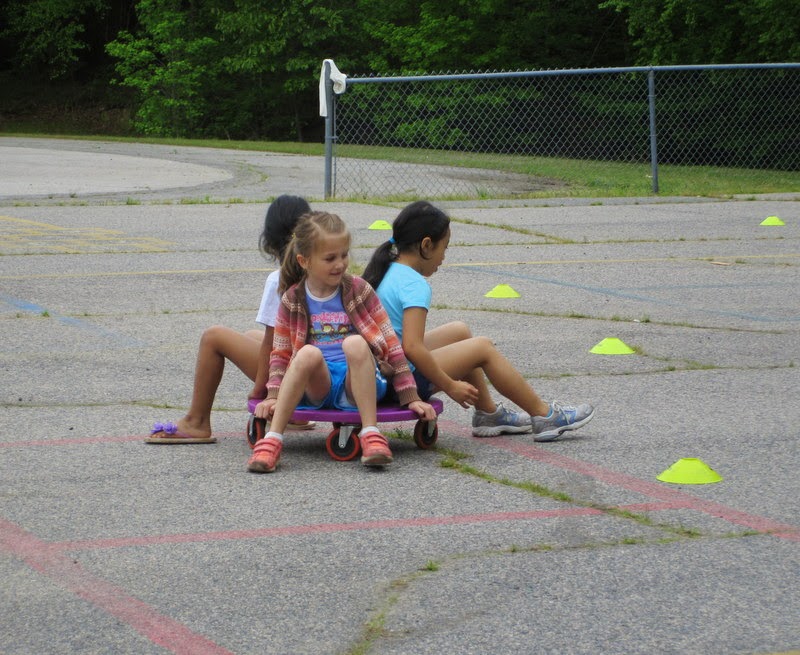 Inside we had a noodle toss (you try to keep your side of the net clear): 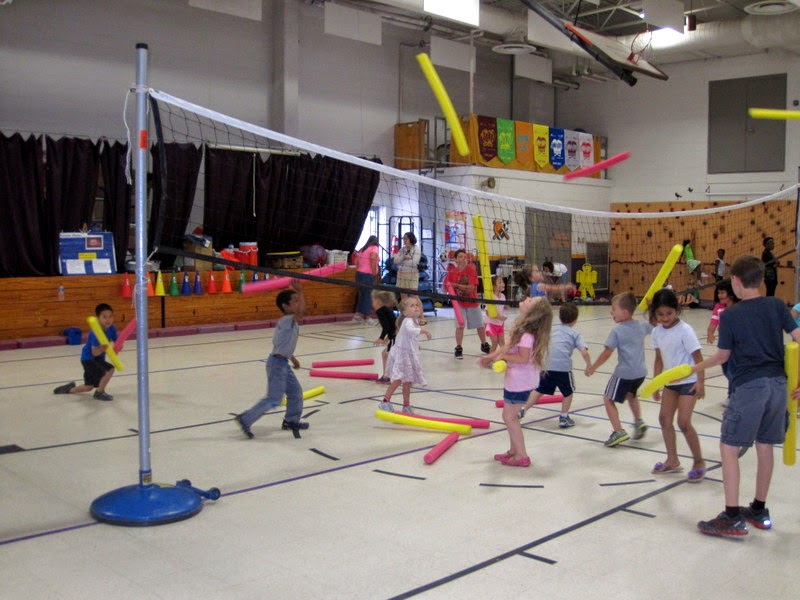 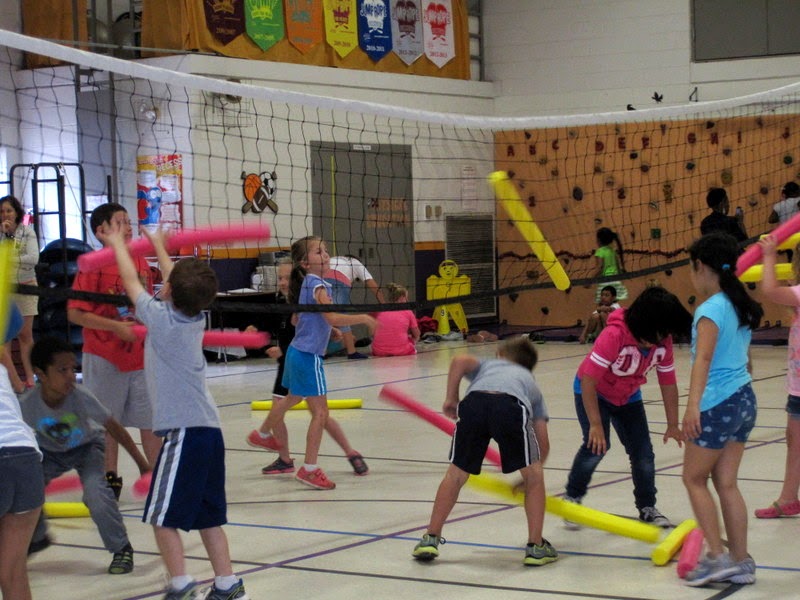 And enjoyed some time on the climbing wall: 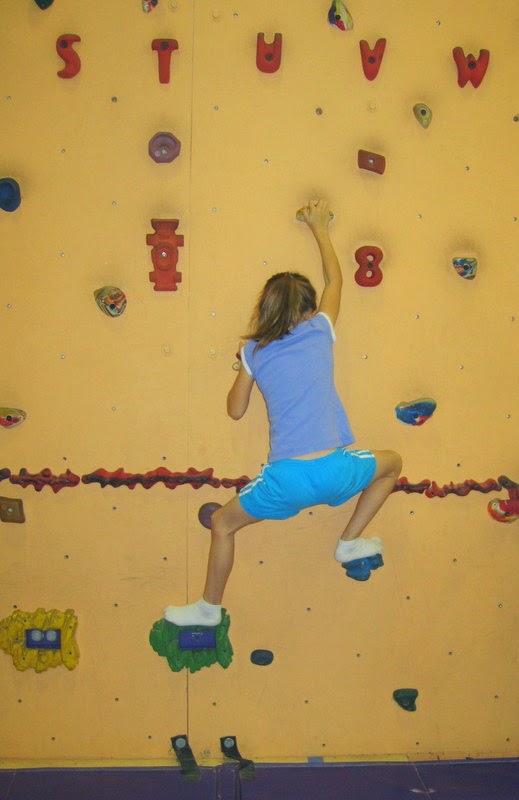 Feet aren't allowed above the red line, so although she couldn't climb very high Rachel proved her monkey-like abilities in climbing horizontally. Miriam gave it a little try, too, but found she couldn't keep up with the big kids and decided to sit it out. 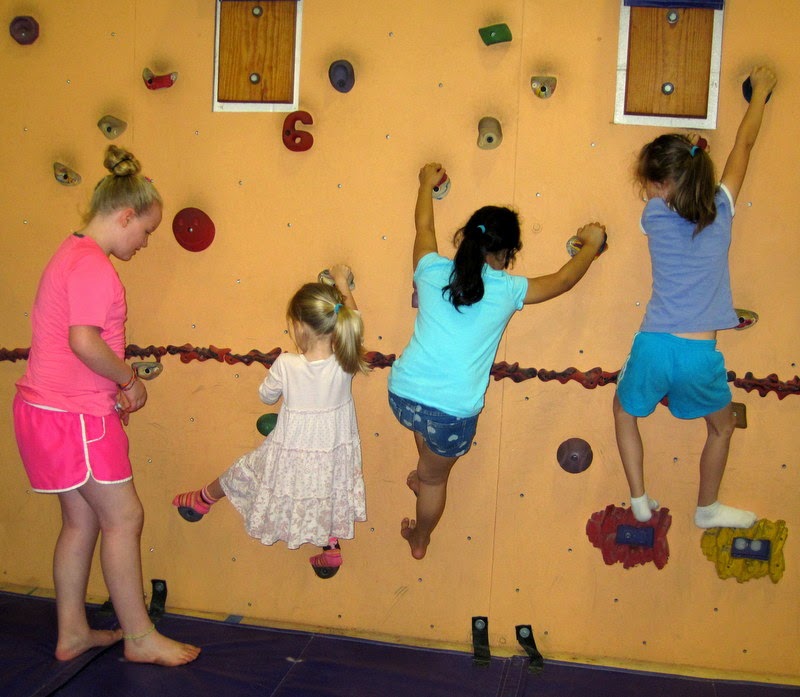 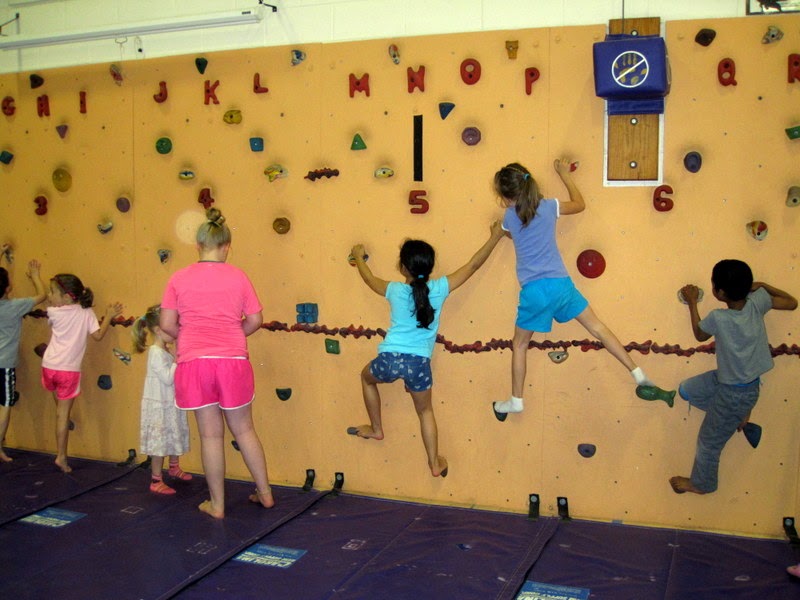 And here's the musical squirt bottle station. At this point, Scarlet is pointing at Miriam and saying, "She's already had four turns!" Rachel kept forgetting to pay attention to when the water bottles were being passed to her. But it's not like anyone was refused a turn—four bottles were being passed around the circle and the music was purposely stopped to allow everyone to get a turn. 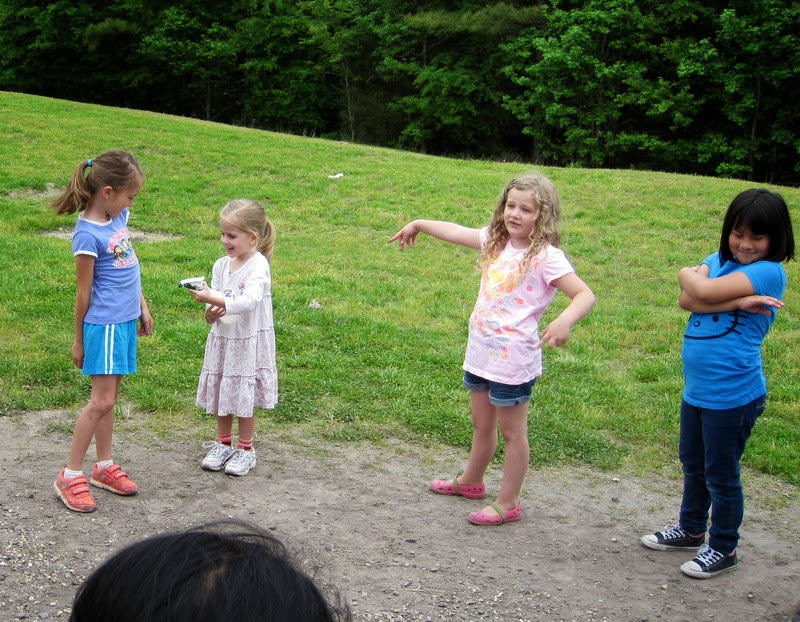 I suppose I can see the benefit of this station on a hot day.

So even though no score was kept and they didn't get popsicles until after lunch, recess, and "specials" (instead of plopping down on the field to enjoy their spoils while scores were tallied, like I did at my field days of yore) I think all the children had a wonderful time.

And then I took my worn-out toddler home and joined him in a well-earned nap.
Posted by Nancy at 5:10 PM