There's this 10,000-hour rule that Malcolm Gladwell claims will help you become an expert in any given field. 10,000 hours of practice will grant you expertise. It's simple—only not simple because...10,000 hours.

Well, I've been a mother for approximately 59,712 hours and I'm no where near an expert.

Maybe I'm not practicing hard enough. But then again, maybe motherhood is simply on a different scale. Maybe I haven't managed to get 10,000 hours in because the game keeps changing on me.

First I had to learn to be Rachel's mother. And that was hard.

Then I had to learn to be Miriam's mother. And—no offense to any of my children—that was basically a walk in the park because I honestly didn't know that babies did things like...sleep...be content when left their own...not crawl at five months old.

But by then I had to learn how to be the mother to toddler-Rachel. And that was hard.

Learning to be Benjamin's mother was hard. I had to learn about breast pumps and feeding tubes and oxygen tanks and apnea-bradycardia and GERD and all sorts of things that I had never worried about with the girls, who were decent enough to arrive on schedule. I also had to relearn how to change diapers, which is a bit different with boys than with girls. Apparently.

And now we've started the school-girl phase with Rachel, the preschool stage with Miriam, and the toddler stage with Benjamin, and I'm fairly certain I'm never going to get my 10,000 in anywhere.

But that's okay, I guess, because my children love me for me just as much as I love them for them. We'll just keep learning together.

Anyway, my point is that I'm not an expert mother. I'm a young mother, bumbling her way along. But I think that's alright because I have a bunch of cute little ones bumbling along through life along with me.

Mother's day was a good day. My girls somewhat surprised me with breakfast in bed, but only somewhat because I overheard them plotting the night before.

"We'll make toast. And yogurt with granola. And a grapefruit. And milk and cereal. And do you think we'll be able to make an egg? What about bacon? Oh, and..."

"How about just yogurt and granola?" I suggested.

"But what if you're still hungry after that?" they wanted to know.

"Then I will get up and find something else to eat. But I don't think I could eat all the things you guys were planning."

So, in the morning the girls got up with their alarm. They went to the kitchen. They emptied two containers of yogurt into a bowl (they must think I eat a lot) and mixed some granola into it. Then they sprinkled granola on top.

They brought it into me and wished me a happy mother's day. I thanked them for my breakfast and then quickly put it aside when some ginormous cards were thrown into my lap. Rachel had made them at school. 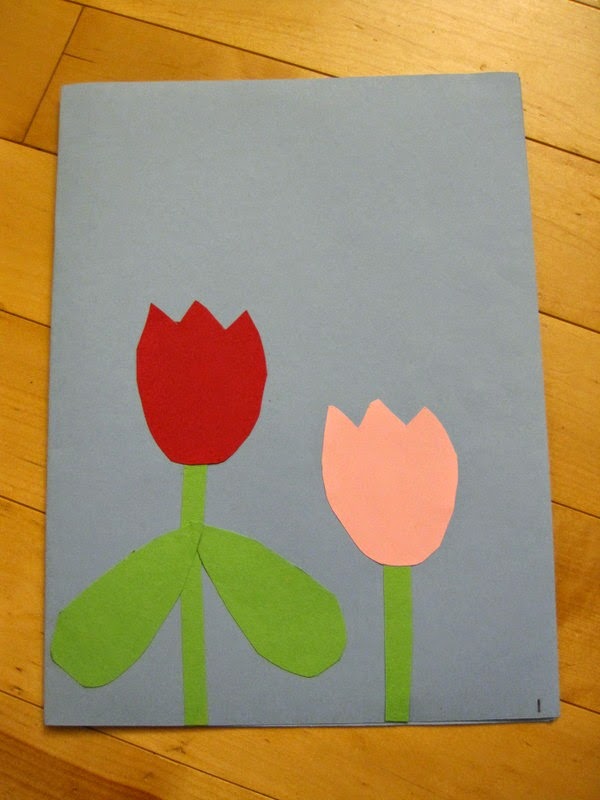 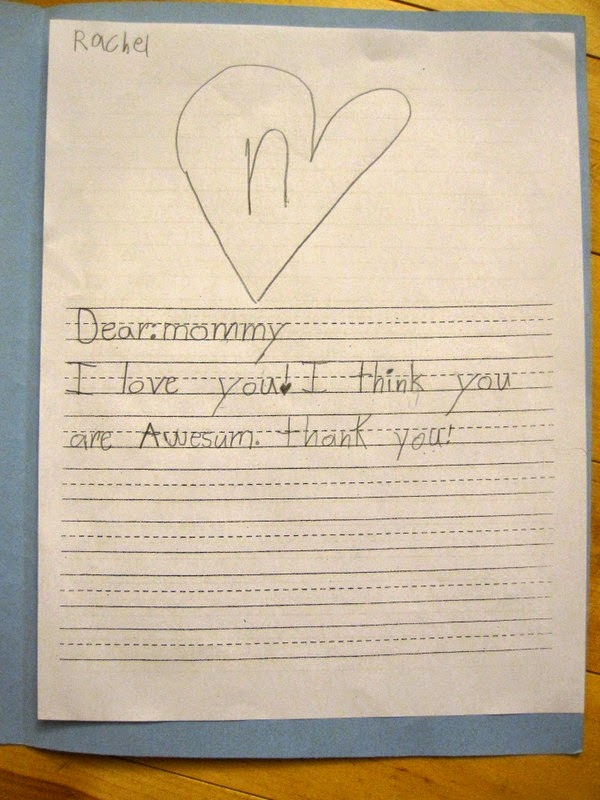 She also made me this interesting flower in art class. It's a collage of different papers she painted. And the center is an old CD and some "gem stones." 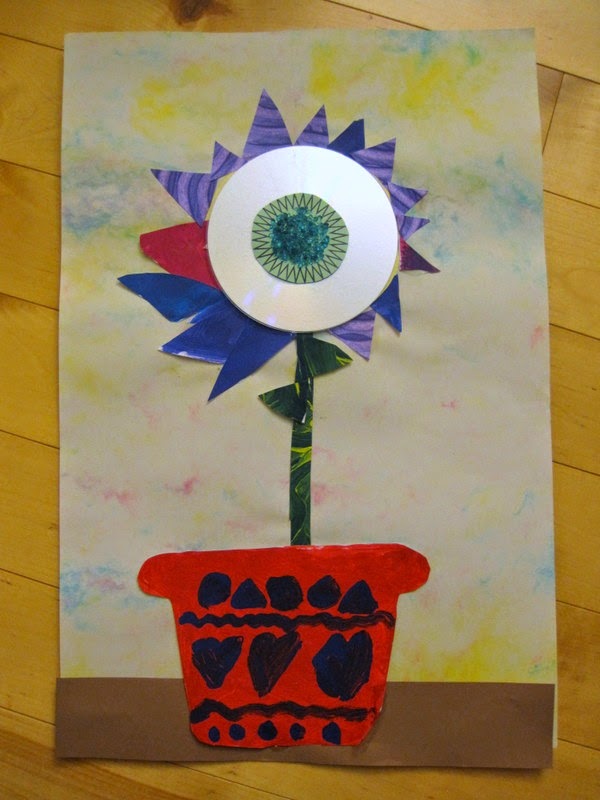 Then Miriam had a mini-meltdown because she had neglected to make me a card. I suggested that she go make one and that made everything all better. So Miriam ran off to make me a card and I turned to my breakfast. I scooped some yogurt and granola onto a spoon and brought the bite to my mouth.

"Is it good?" Rachel asked when I slid the spoon out of my mouth. I nodded, my mouth still too full to talk. "Oh, good!" she said. "We left a special surprise in the middle."

I paused mid-swallow, my eyes wide with an unspoken question.

"What kind of special surprise?" Andrew voiced for me.

"We put some granola in the middle!" Rachel chirped excitedly.

I finished swallowing. "So you mean you just mixed some granola into the yogurt and put granola on top, right?" I verified.

I was mostly just happy that the special surprise wasn't anything terribly surprising.

Miriam ran in a few minutes later with my card. It's obviously not her best work but it's hard to do your best work while sniffling away tears. 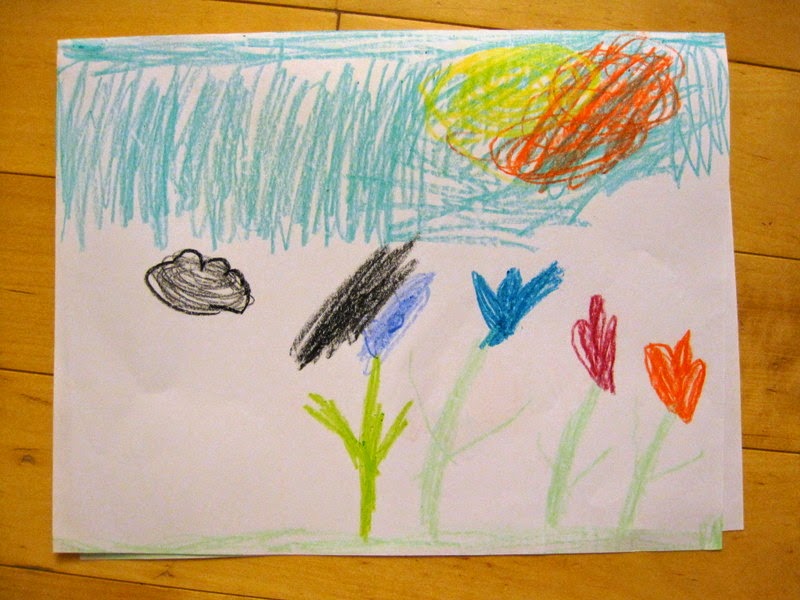 She loves loves me! 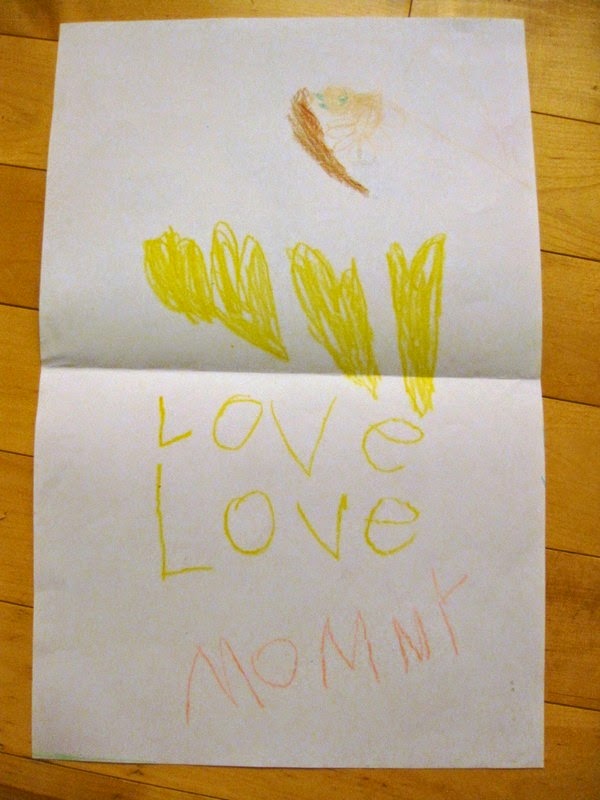 Somehow we managed to get ready for church and out the door in record time. When we got to the church we found the parking lot surprisingly empty.

It felt so nice to come have a somewhat normal day at church. Our schedule has been so confusing lately. It started back in March, really, when we had stake conference.

Mother's Day was a normal three-hour block of meetings but we arranged for the young men to take over all the primary classes so the women could all attend Relief Society together, which is really quite a lovely break. It was really nice to go to Relief Society even if we had to hold it in the overflow (one of the sections of the cultural hall/gymnasium) because there are too many of us to fit into the Relief Society room. The nursery is too big to fit in the nursery room so they were in the next overflow area (with a heavy-duty curtain drawn between us to divide the room).

That means, "I want Momma!" and I don't know what it is about hearing your own kids scream but it's different from hearing other kids scream. I'm pretty sure there's a fight-or-flight thing triggered in my brain when I hear my kids cry. Even when I know they're just fine.

I started looking for an exit, but I was rather trapped, sitting in the middle of a row in a very crowded room.

Fortunately Benjamin stopped crying before I bolted from the room, so I relaxed back into my chair. A few minutes later I happened to glance across the room (there may or may not have been a table laden with cupcakes over there) and happened to see that Kiki cuddling my baby. She had jumped up to get him when she heard him crying.

Kiki is Benjamin's favourite nursery leader. I think she loves him about as much as he loves her.

When I made eye contact with Kiki she brought Benjamin over to me.

"Do you want him? Or should I put him back in the nursery?" she asked. "I think I hear another one crying so I'm going to go check on them."

Teenage boys are fun, but they are no substitute for a roomful of the caring, watchful women we have as nursery leaders. Our nursery is amazing.

Benjamin already had his arms wrapped around my neck so I decided to just keep him on my lap for the rest of the lesson and enjoyed some quality snuggle time. He only got fussy at the very end when they announced it was time for cupcakes and I had to explain to him that the cupcakes were only for the grown ups. But church was over then, so it didn't matter.

(Next week, by the way, is ward conference, which means that our schedule will be the same but that the stake leadership will be providing lessons for every unit but the primary—so although primary will be back to normal (finally!) everyone else has one more week of wonkiness. I, for one, am looking forward to getting back to normal).


Once back at home we skyped with Andrew's family. And then I took a nap with Benjamin while Andrew made a glorious Mother's Day meal: spicy cashew chicken. 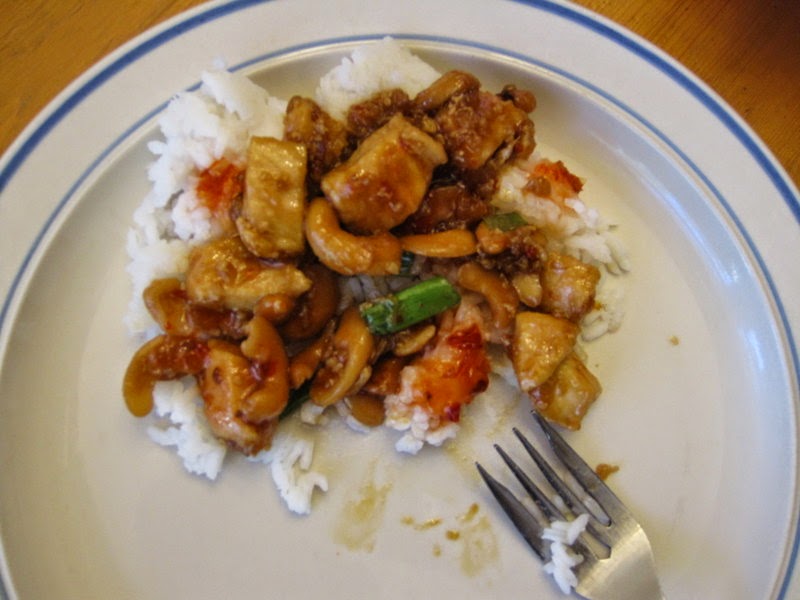 It was our (specifically my) favourite meal at our favourite restaurant in Cairo and although the home-cooked version of it isn't quite like the restaurant version it's still a fabulous meal.

When Benjamin and I got up from our nap Andrew ran up to me and begged me for the antidote for jalapeño peppers (because I am an eternal fountain of knowledge good at googling stuff). His eyes were watering mercilessly and he was obviously in a terrible amount of pain. He'd begun preparing the dried peppers for the dish and reminded himself not to touch his face. As soon as he'd finished his self-admonition he felt a tickle in his nose. That tickle grew and grew while he was working that it was soon nearly unbearable. He had to get that itch!

He raced through his work and then ran to the sink to wash his hands so he could scratch his nose.

Unfortunately, he didn't wash his hands well enough and he got some of the chili oil right on his nose.

I looked around online and found a couple of things to try: milk and olive oil were the most common suggestions.

Now, you should know that when Andrew was younger he developed this method of dealing with runny noses. You simply twist two ends of a kleenex into a firm nob of sorts and then stuff those nobs into either nostril. Boom! No more wiping—you just walk around with a kleenex dangling from your nose. Genius, right?

I think it's rather gross. So does his mother, who brought it up as a funny-story-from-the-past while she was visiting and I was like, "That's not something he used to do. It's something that he still does! And he taught it to the girls, too! So now they all do it!"

I guess there are some things that simply aren't possible to grow out of.

Anyway, he tried rinsing his nose with milk but that didn't work so I suggested the unthinkable.

"You know how you stuff kleenex up your nose?" I asked. He nodded. "Why don't you dip the kleenex in the milk and then stuff it up your nose to give it more time to work its magic."

So that's what he did. Only we did a double-nostril study (kind of like a double-blind study...but different) to see whether milk or olive oil was more effective at canceling out the chili's evil oils. One nob of the kleenex got dipped in milk, the other nob got dipped into olive oil.

Soon the results were in—the olive oil soothed Andrew's nostril much quicker than the milk did, so the milk kleenex was replaced with an olive oil one. The day was saved! The meal was delicious.

After dinner we skyped with my family and then had pie, which Benjamin loved so much he added the word to his vocabulary (along with cashew and thank you).

All in all it was a wonderful Mother's Day. It's always nice to be thanked for doing all the behind-the-scene work that people seem to overlook the other 364 days of the year.
Posted by Nancy at 10:32 PM