Remember last year when I was so worried about the garden? I was seriously afraid nothing would grow or that I'd do it all wrong or...I don't even know what all I was worried about. But I was certainly worried about it.

Andrew can tell you about how worked up I get over stuff.

This year, though, I didn't spend a lot of time stressing about the garden. I planted stuff. I waited for it to grow. We've already harvested some radishes. It looks like we'll be able to try some lettuce soon. 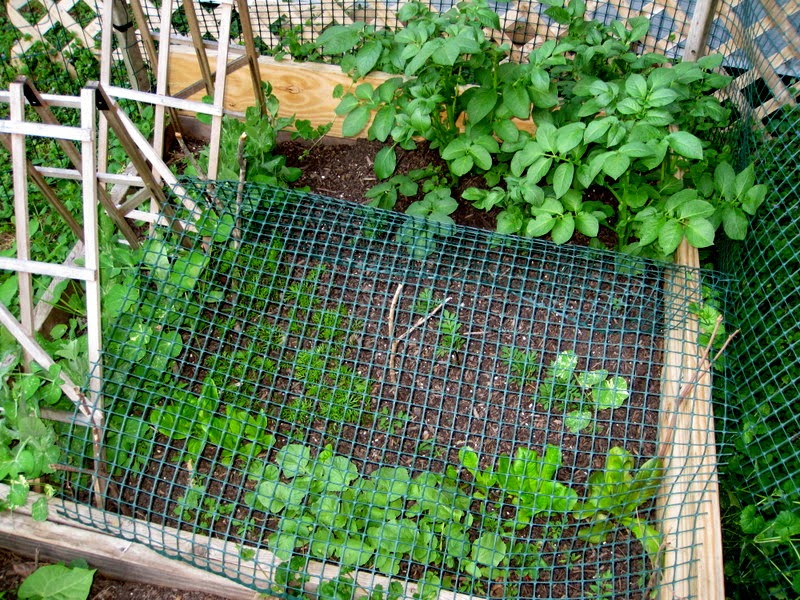 Our peas are up. Our carrots are sending out their tops. Our potatoes are dwarfing everything in sight. They're in there as a special request from Rachel, who complained one day after we made home fries that they weren't really home fries since the potatoes came from the store.

The only thing that hasn't started growing are my peppers. I have planted them twice now and haven't seen a single shoot.

We've also got nasturtium, marigolds, and zinnias that will hopefully take off and bring some colour and pollinators to our plot.

In our other garden we've got cucumbers and green beans. I think that's all I planted, really. 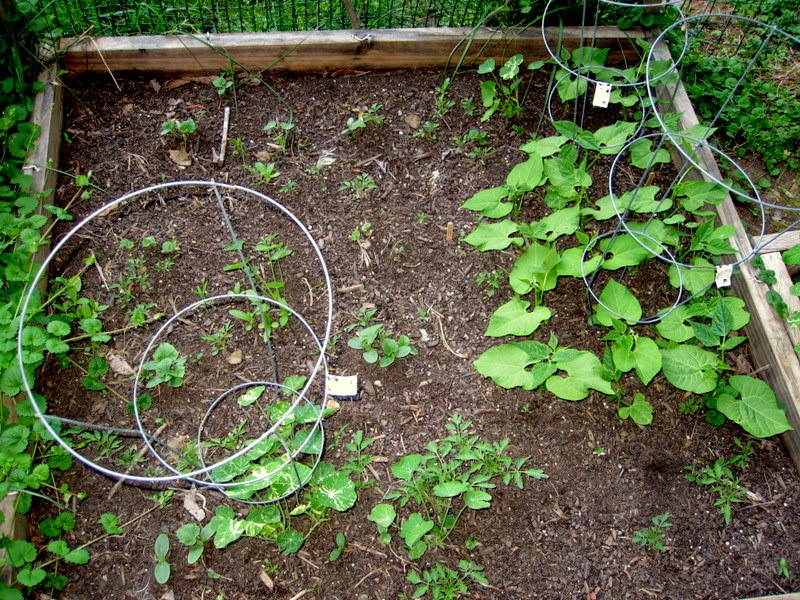 For some reason we have several volunteer tomato plants in this box (there were no tomatoes in it last year, though there were some in the other box). I've decided to let them grow. Because tomatoes.

We've also got tomatoes and carrots in planters on the deck. I still need to plant our herb garden—Andrew wants some basil to go with all these tomatoes I'm hoping for (he thinks tomatoes are useless without basil).

I guess I haven't been stressing about the garden this year because last year I learned two things:

2) After it grows it any edible part of the plant will likely be pillaged by local wildlife.

But even if that is the case, it's still a worthwhile pursuit, right?

I finally pulled the poison ivy sprig from our strawberry container and haven't seen a hint of any more trying to hide in there. I fitted the lid more snugly around the barrel so hopefully we'll manage to keep the deer out of it this year. I don't know why they go after my strawberry plants when there is wild strawberry all over the yard that they have full access to.

This post is rather disjointed because I started writing it yesterday and don't care as much about writing it today...but...I just wanted to say that our poor plants have had a terrible growing season so far. It's been so cold. It snowed (kind of) after I planted them (in April) and then it also hailed on them with one of the tornado-bearing storms that swept through. Somehow, though, they've decided to keep on growing. Probably because we no longer live in an arid climate so stuff is just going to grow.
Posted by Nancy at 10:37 PM