They're making a poetry museum to display. The children can bring in a little diorama-in-a-jar about a poem they either like or have written themselves. Rachel's busy working on that, now that I told her that she has no more screen time (despite her illness).

She's also written a poem for the Poet Tree. This is her cute little poem:


Bees like to work in trees.
Sweet, sweet honeybees.
Monkeys like to swing and play.
Each and every single day.
I am not a monkey.
I am not a bee.


But I have a little of both in me.


While we were talking about poems at dinner and Rachel was bemoaning her lack of subject matter ("I don't even know what to write a poem about!") I suggested that she write a poem about riding on the bus for Benjamin, who would like nothing more than to ride on the bus. She said there was no way possible to write a poem about a bus. So I began composing one on the spot. I only got one stanza out before I got stumped. She was still quite impressed.

Here's my finished poem, for better or worse:

Every day at five to four
My brother waits outside the door.
Anxiously he looks for us,
Riding on the big school bus.

My brother knows the school bus sound.
He listens close—we're homeward bound—
Excited. Why? It's obvious.
We're riding on the big school bus.

At last the bus pulls into sight
He runs to me, he hugs me tight.
On we wave the traveling circus—
Off it goes—the big school bus.

In another year or three
My brother'll ride the bus with me!
I'll be so glad when he can join us,
Riding on the big school bus.

And here is a picture of Benjamin and Miriam waiting for a school bus last Friday (not Rachel's bus—a friend's school bus). Waiting for the bus is one of Benjamin's favourite parts of the day. 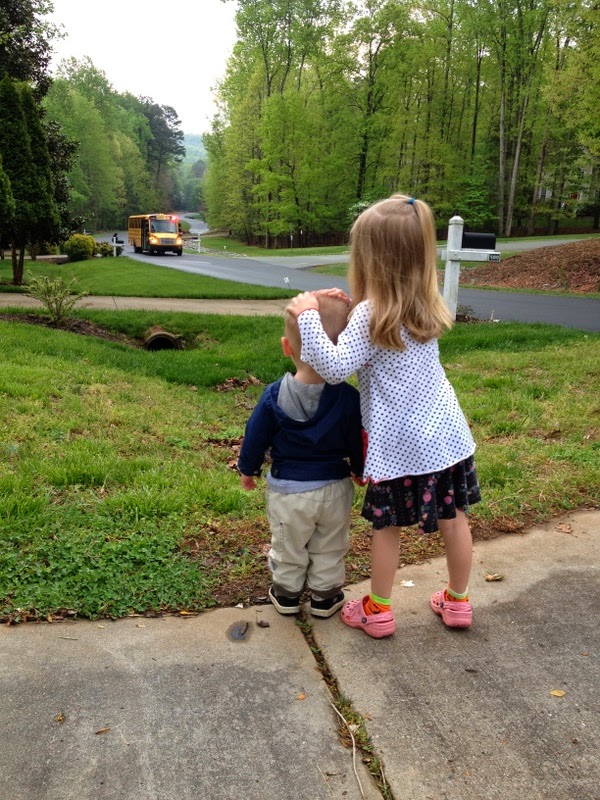