Never were there such devoted...siblings

Today I walked out of my bedroom and the kids were waiting for story time on the couch. Well, they were almost waiting, but instead of only waiting Rachel was reading a little pile of books to Miriam and Benjamin, who were both enjoying it royally. 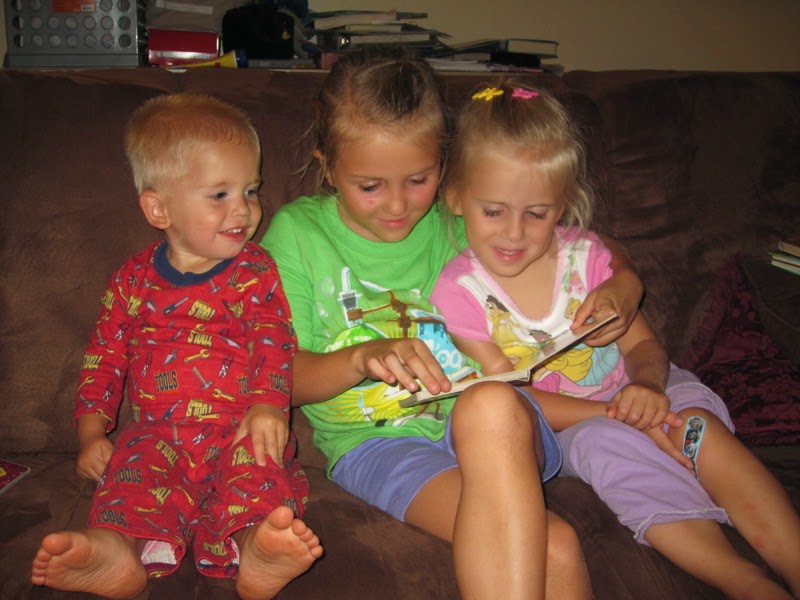 Rachel has her arm around Miriam because Miriam needed some extra love, which made the whole scene even more adorable.


Miriam fell on the driveway and scraped her knee just before it was time to come inside and put jammies on so she was feeling a little tender, anyway, and then Benjamin threw a book at her while they were waiting for me and it landed right on her toe. Suddenly all three of them were screaming at each other.

Miriam was wailing about her toe. Rachel was chastising Benjamin about the ills of book-throwing. He was screaming "NOOOOOOO!" in response to everything anyone said to him. It was chaos out there.

Because it is completely logical to yell, "Stop screaming!" at your screaming children.

It's not like I was angry or anything. I was just going to be there in a minute. And I needed everyone to stop screaming. Except me or including me or...something. Just—everyone—stop screaming!

They pulled it off beautifully.
Posted by Nancy at 12:11 AM