A morning on campus

When I asked Andrew what the plan was for today he told me that he hoped I could:


"That's not going to happen," I told him. "If you think I can drive to Duke twice in one day and still be happy person at the end of the day when I have to put the kids to bed on my own, you are mistaken."

"Then how is it going to happen?" he asked.

"We'll go to campus a little later and the kids and I will visit Duke Gardens while you're teaching," I said.

He'd hoped to "get some stuff done" before teaching his class, but I think everything worked out fine in the end. He dropped Rachel off at school and ran to Kroger to get some last-minute groceries and some supplies for his class (he needed thirty erasers or something ridiculous like that and we simply didn't have that many erasers on hand), then he came home and packed while I got the little ones ready to go for the day. We packed a little picnic and were in the car, ready to go, by 9:43 (our goal was 9:45 so we felt pretty smug about this).

We parked the car and Andrew gave me instructions on how to drive from the parking lot to the Sanford building so that I could pick him up when the time came, then we took a "short cut" through campus to visit his office.

This was my first time seeing his office and my visit marks an end to a long-standing joke that perhaps he's not even going to school—because I've never actually seen his office. He's taken the girls to his office a couple of times when I've had meetings. But I'd never seen his supposed workspace.

(Truthfully, it's not a very funny joke because it always made me think of this).

Right now he's teaching some microeconomics classes to a group of Chinese bureaucrats for the DCID. He kept talking about the DCID last night and I kept smiling and nodding as if what he was saying made sense to me. Then I said, "So, what's the DCID?"

"What't he DCID?!" he said. "You don't know what that stands for? I've been standing here going on and on about them and you don't even know what they are?!"

"The Duke Center for International Development," he said.

"Could have been anything," I pointed out. "How am I supposed to know who you're working for? I haven't even seen your office."

I put air quotations around the word "office" to prove my point.

But now I have seen his office so I guess he really does do stuff on campus (go figure).

Now that he's a big third-year student he has a little cubicle with a door and everything. His old "office" was only a desk—no door. He's certainly moving up in the world.

Benjamin was pretty sure that Daddy's office was the potty. When we pulled up to the door and Andrew unlocked it and swung it open, Benjamin said, "Potty!" and climbed out of the stroller.

"Do you need to go to the bathroom?" I asked.

"Ummmmm..." said Benjamin, who likes to take a minute to think before answer any question. "Yes!"

We left Andrew's cubicle behind in order to find both the potty and the pencil sharpener. Along the way Benjamin told everyone he saw, "Me—POTTY!"

Andrew took Benjamin potty and then Miriam and I sharpened some pencils for him while he cut some paper for his class. We sharpened three whole pencils (out of, like, thirty) before leaving for Duke Gardens.

I mostly just let the kids do whatever they wanted while I followed them around. Benjamin's at a great age where he mostly wants to do whatever his sisters decide so he wasn't interested in straying too far away from Miriam in case she did something cool that he wanted to copy. This stage is much easier than the stage where he was always taking off in the opposite direction from everybody else!

Here a bunch of monkey-see-monkey-do pictures of my kids: 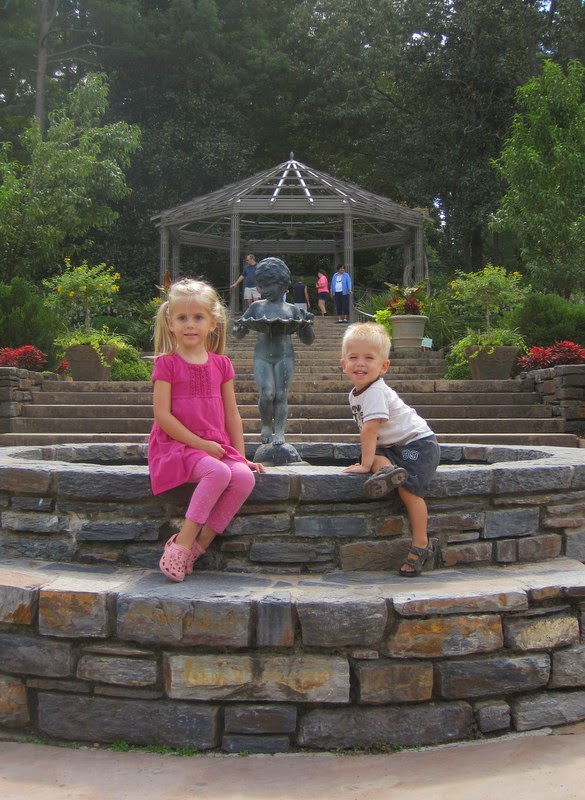 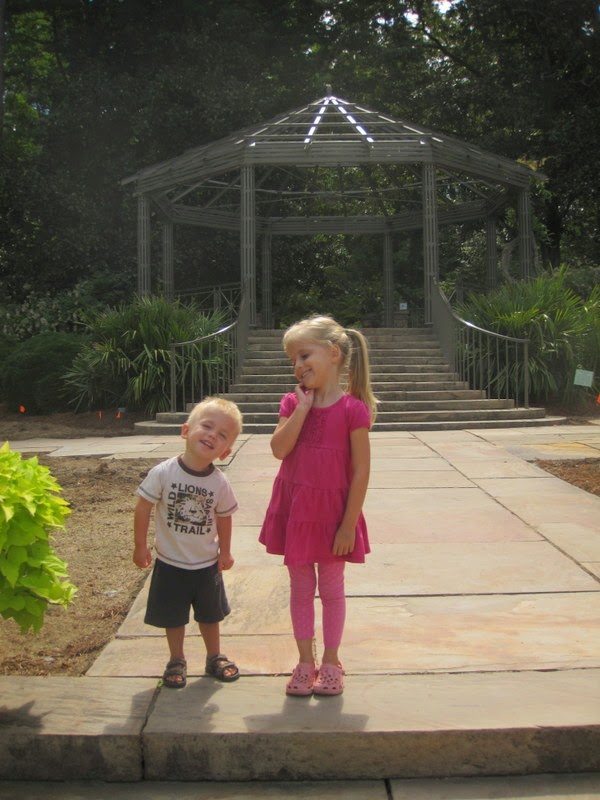 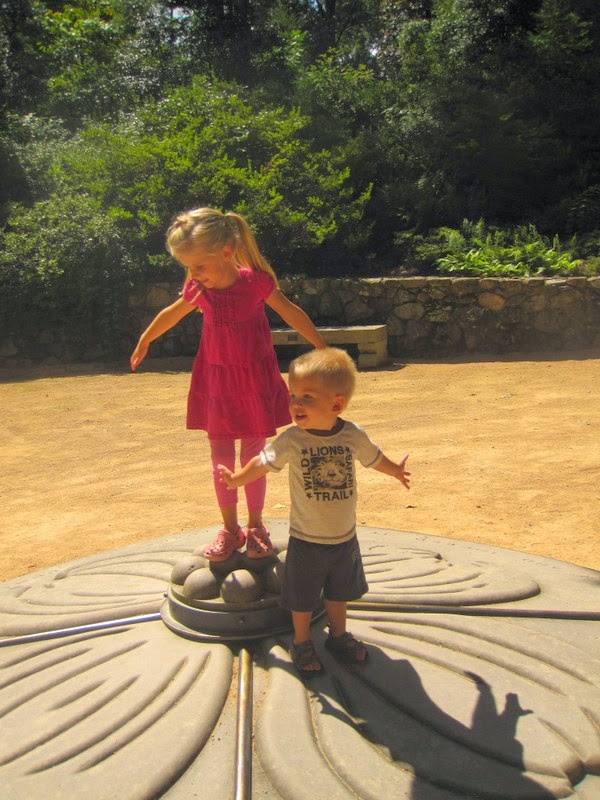 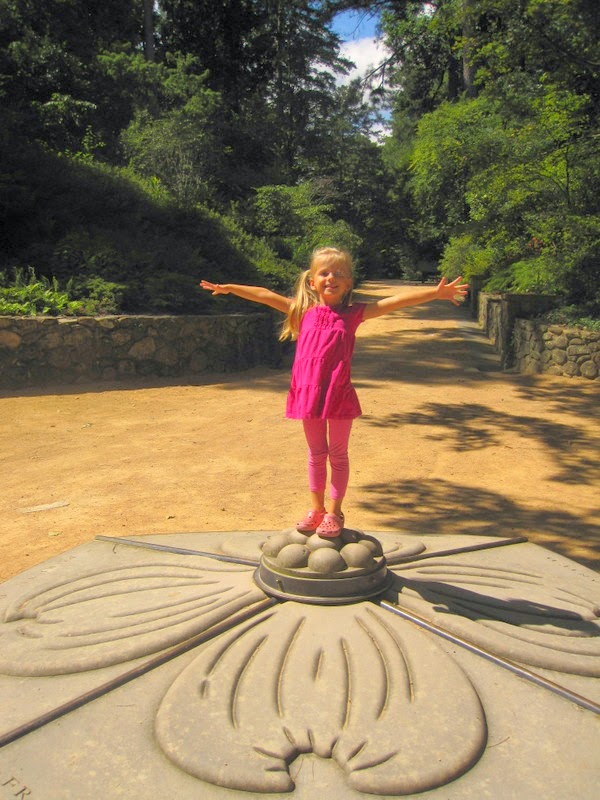 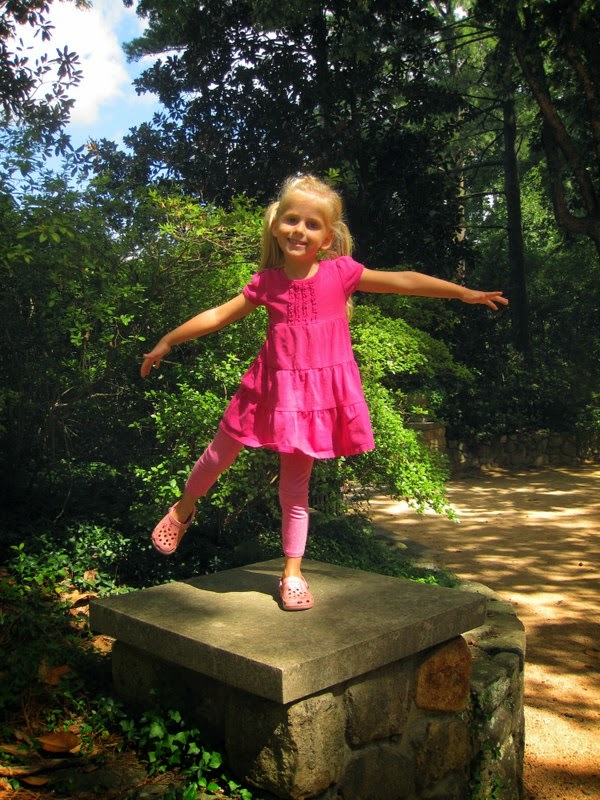 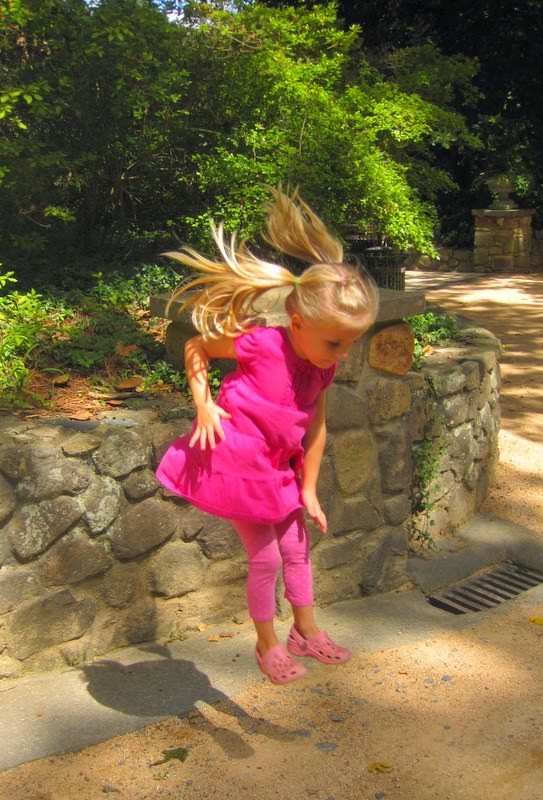 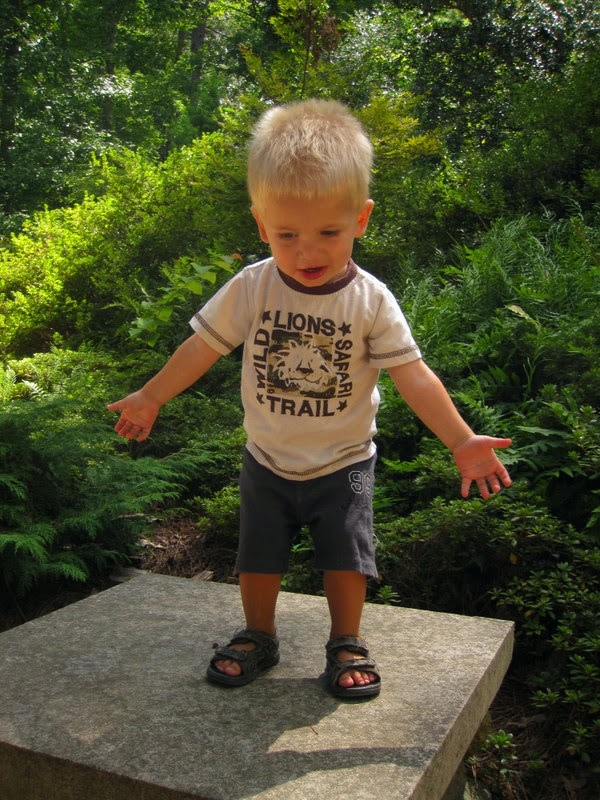 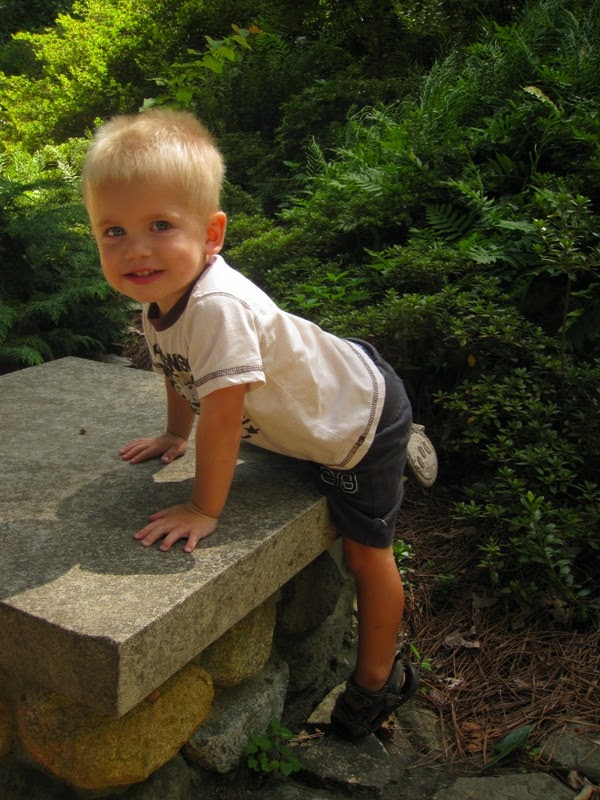 It was so funny to watch Benjamin trying to copy his sister exactly. He also jumped down from the wall but I don't have pictures of that because I was too busy catching him. 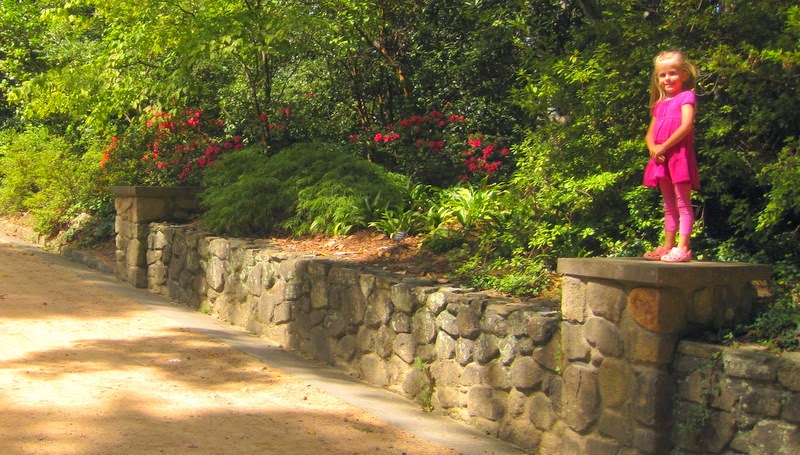 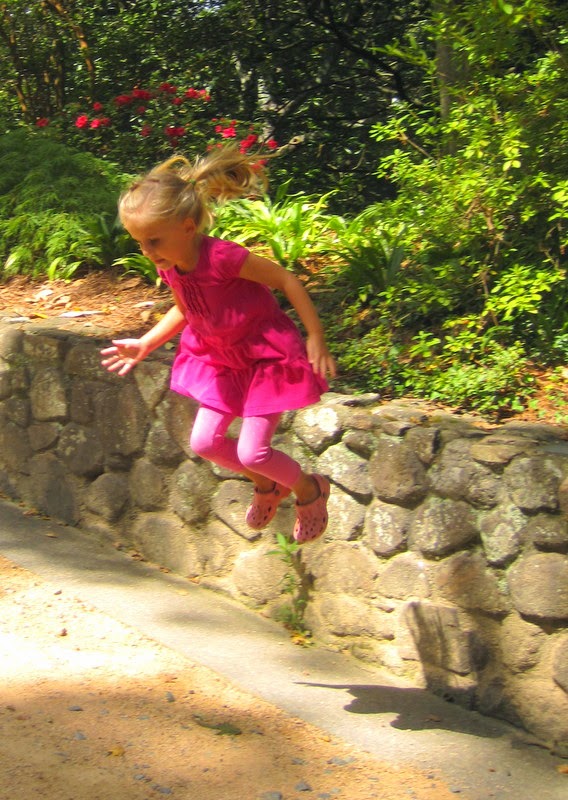 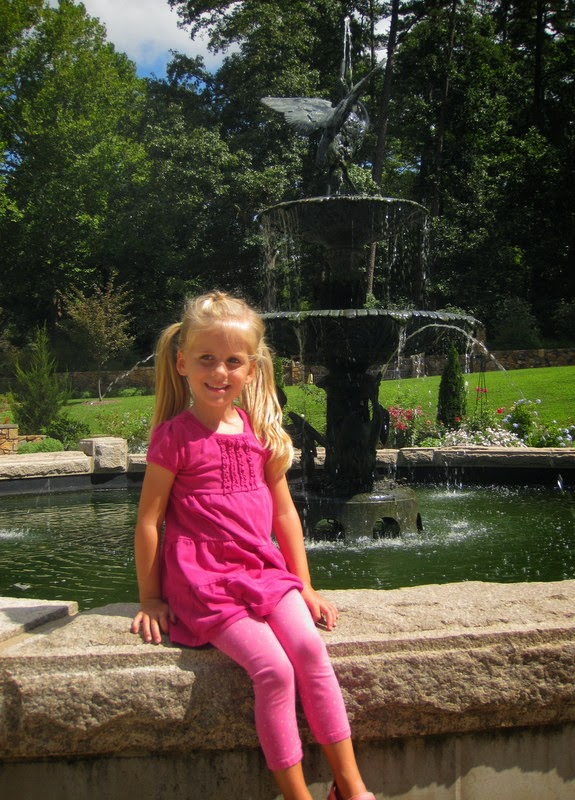 A sweet grandpa stopped and insisted on taking a picture of the three of us together: 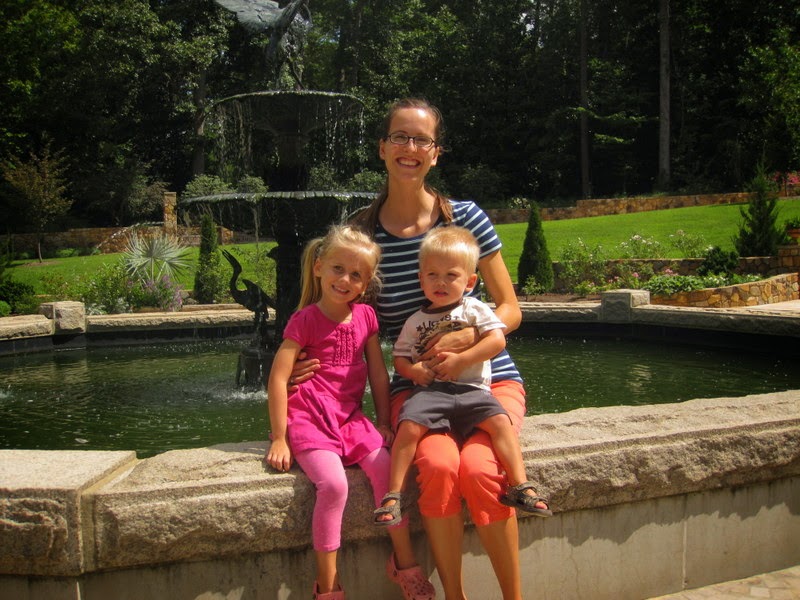 And that's about as far as we got before my alarm rang to tell us it was time to end our adventure and find the parking lot. I gave us a full half hour to get back to the van and drive over to the Sanford building but was still five minutes late to pick up Andrew. That was fine because he didn't come out until we'd been waiting for him for ten minutes!

I was starting to get a little nervous but Miriam wasn't. She kept an observant eye out for her daddy and when she saw clues about his eminent arrival, she told me. "Mom," she said. "I keep seeing more and more and more Chinese people! That must mean Daddy's coming out soon. Teachers are the last people to leave the classroom, you know. First the students go out and then the teacher."

Sure enough, Daddy came out soon after the stream of Chinese students ended (though when I told him what Miriam said he admitted that he'd actually been the first one to leave the classroom—but he'd gone to change out of his dress clothes before coming to find us so he wouldn't have to wear them on the bus). He waved me out of the driver's seat and drove to the bus station himself, wasn't that nice? The only driving I ended up doing all day was from the parking lot to the Sanford building and from the bus station home.

Daddy's now in Washington, DC. He'll be presenting a paper at the APSA conference tomorrow.

Totally unrelated to anything, but...we found this cool moth on our way back to the parking lot. It's called a pandora sphinx moth and was quite eye-catching. Miriam also found a cicada shell, three giant acorns, and a handful of magnolia leaves. Benjamin also collected a few magnolia leaves. They're so big and stiff—the kids like to use them as fans. 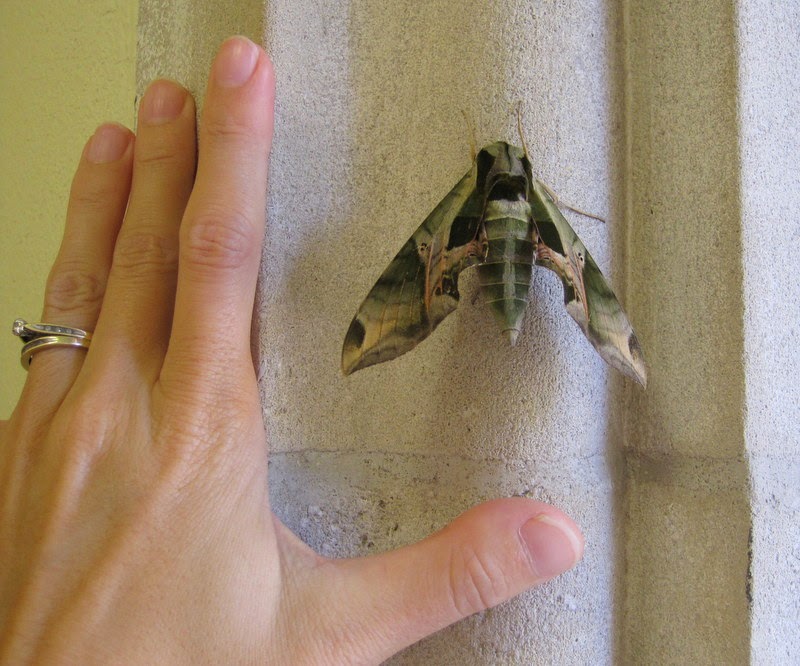