It didn't rain today so we were finally able to check out Wescott's Bronto Trail for family home evening. 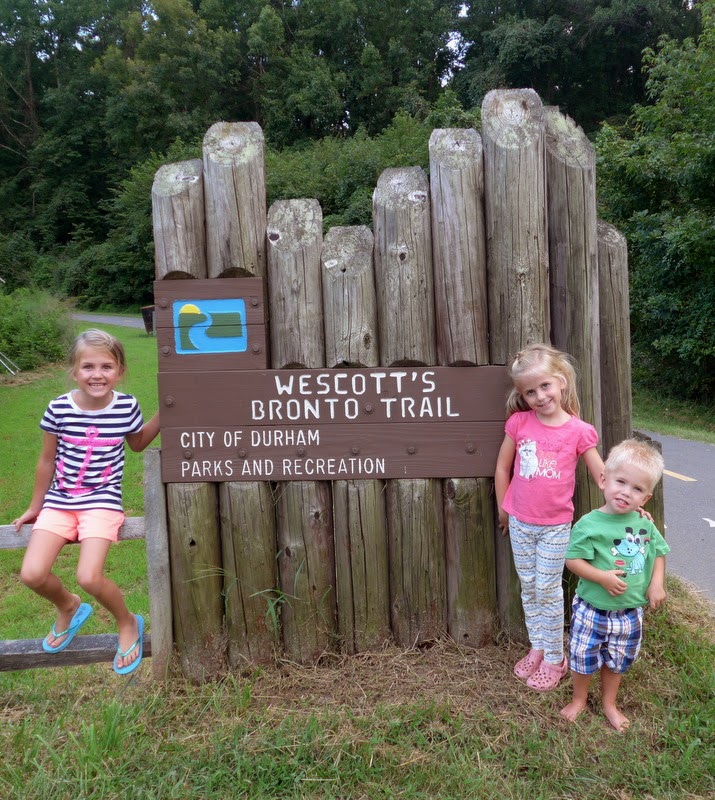 The kids were quite excited when we found it because they really didn't believe we would (after all, we weren't at the museum), but here she is in all her dilapidated glory: 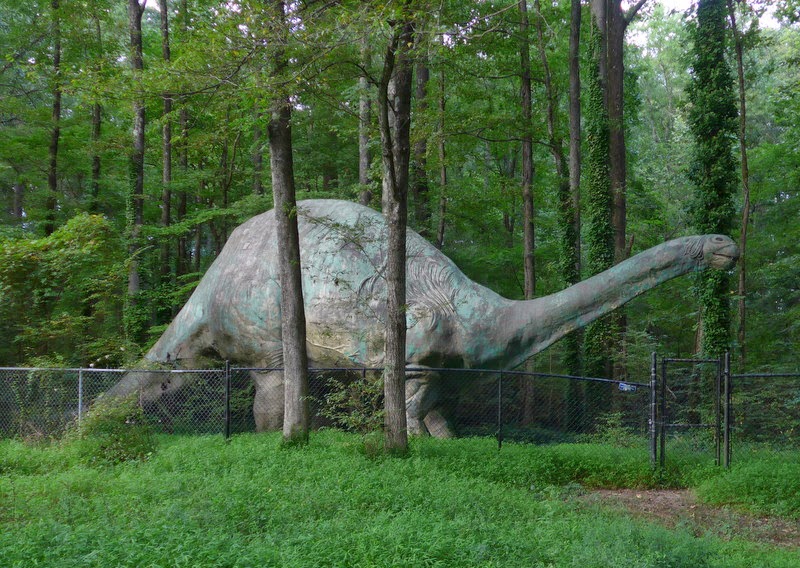 She's had a rather colourful history in the years since Andrew's family saw her last. 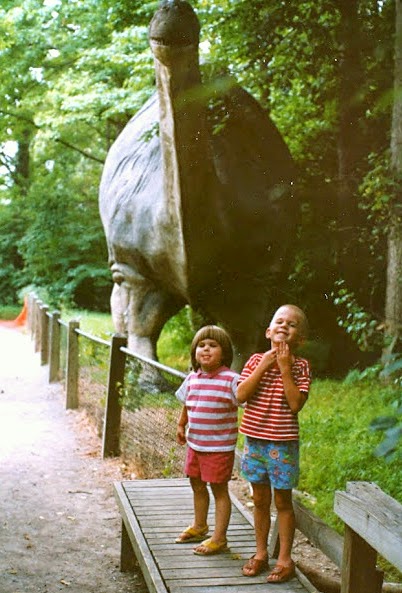 They moved to Utah in 1993 when Ms. Bronto was still looking fabulous, but in 1996 Hurricane Fran hit the area and damage the Pre-History Trail Ms. Bronto called home. Smithsonian.com writer Brian Switek says, "The path, opened in 1967, was meant to take visitors on a journey through 300 million years, but in the wake of the storm it seemed like a good time to pause. Not only did the dinosaurs need some repairs, but scientific research conducted since the trail opened had made most of the dinosaurs woefully out of date."

I believe the brontosaurus is one of those out-of-date creatures. Merely an apatosaurus with the head of a camarasaurus, it seems the brontosaurus never existed (much like that pesky triceratops; though I'm rather in favour of preserving the name brontosaurus and ditching the name apatosaurus, after all it seems like destiny for a dinosaur whose name means "deceptive lizard" to not actually exist—come on, scientists!).

At any rate, the old Pre-History Trail was abandoned when the Museum of Life and Science moved their head quarters across the street. The new Dinosaur Trail opened in July of 2009.

In May of that year, the entire neck and head was stolen in (but were repaired later that year, obviously) and a homeless man once purportedly hollowed out her abdominal cavity and lived inside of her for an entire winter (when I told Andrew this he remarked, "Holy Les Miserables!").

All in all, it's been a bit of a rough half century for Ms. Bronto, but she's still standing tall!

We wanted to recreate Andrew's childhood photo as perfectly as possible but couldn't get to the bench he and Katharine are standing on because it's behind a fence now: 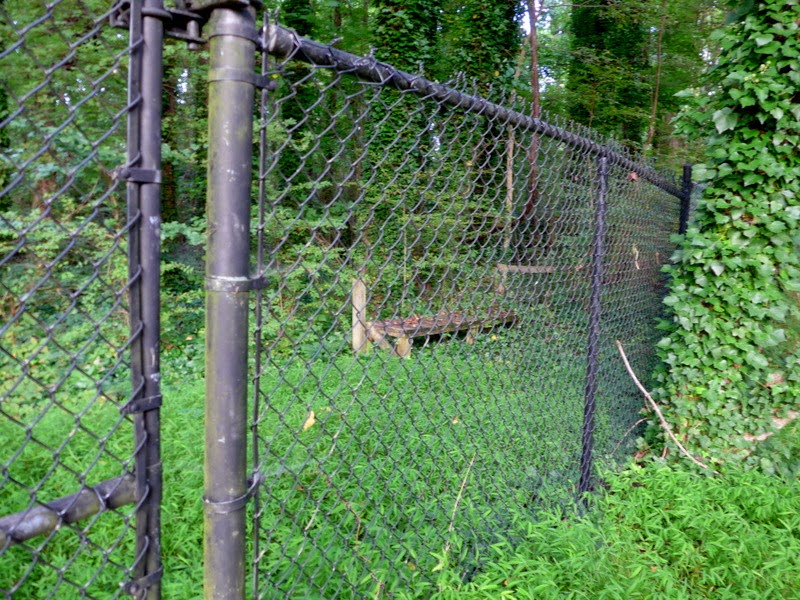 So this recreation will have to do: 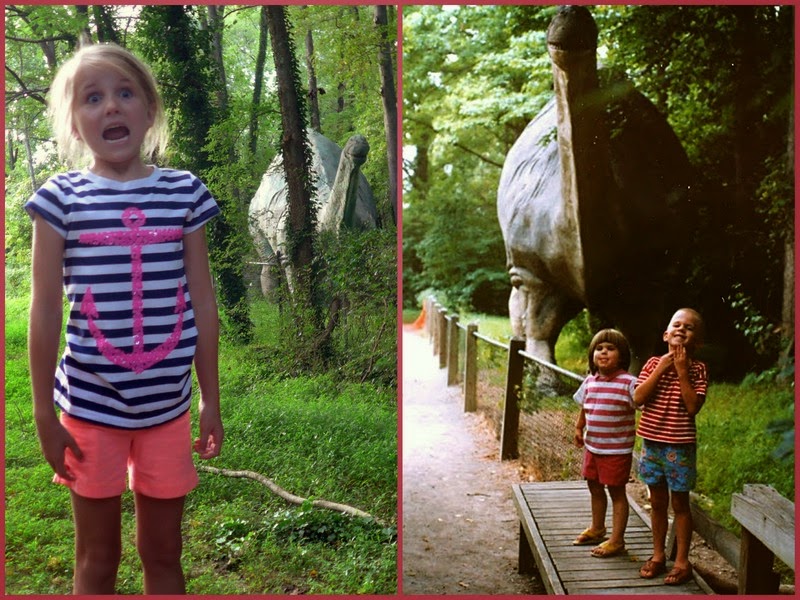 Rachel even wore stripes (though that part wasn't planned).

Here are some more pictures of us with the brontosaurus: 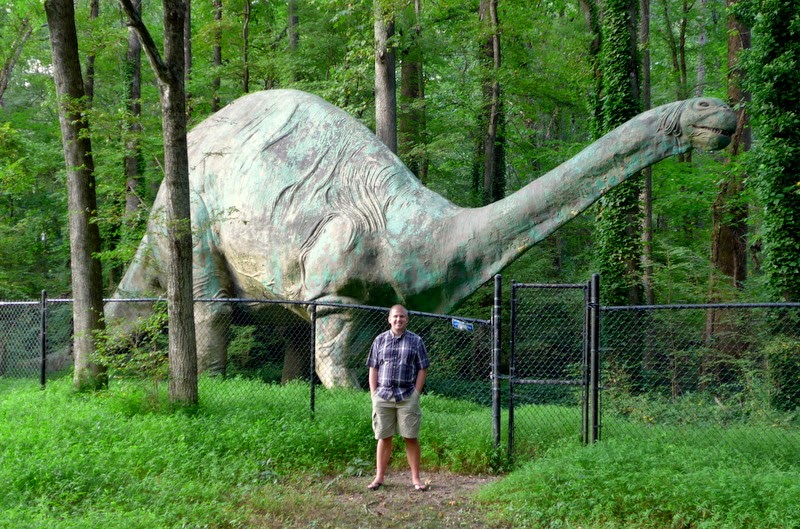 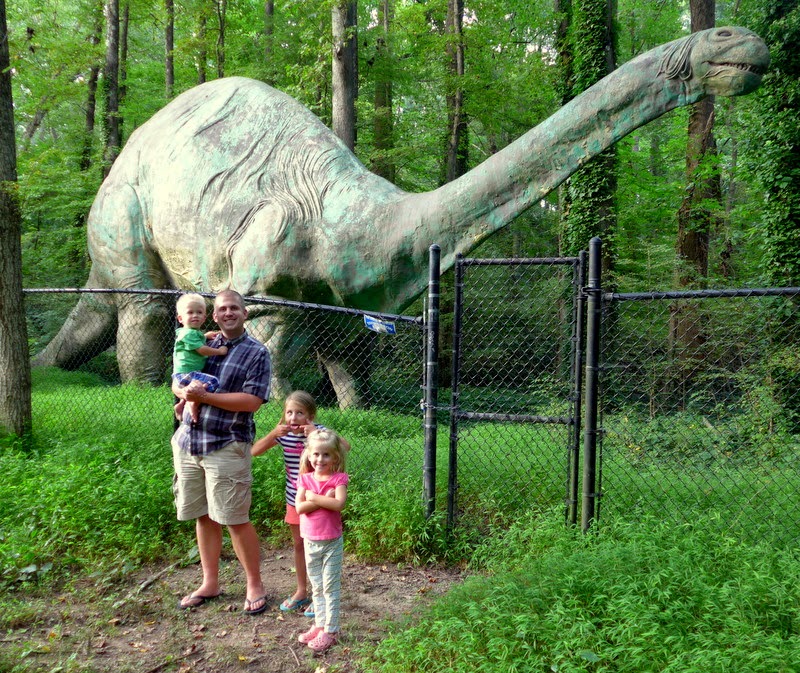 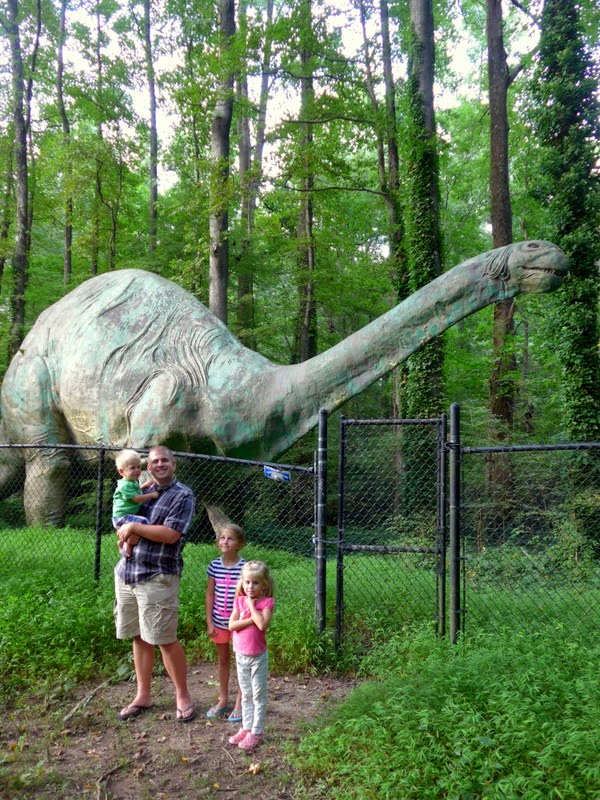 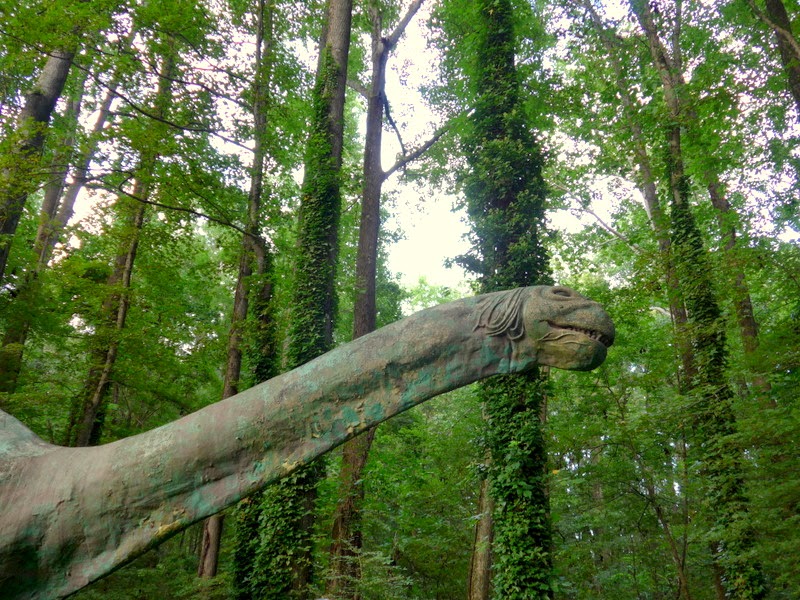 Andrew decided it would be funny to hold Benjamin up to the dinosaur while roaring. Benjamin found this decidedly less funny than Andrew did. 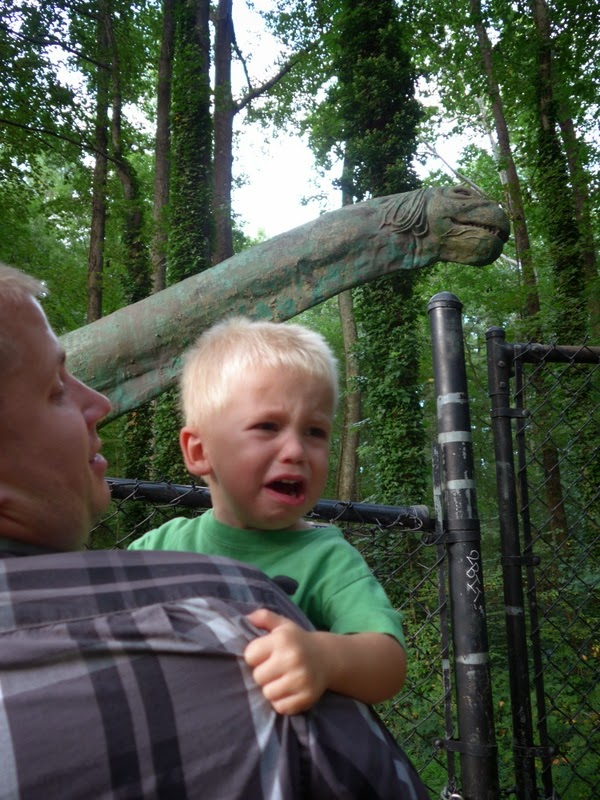 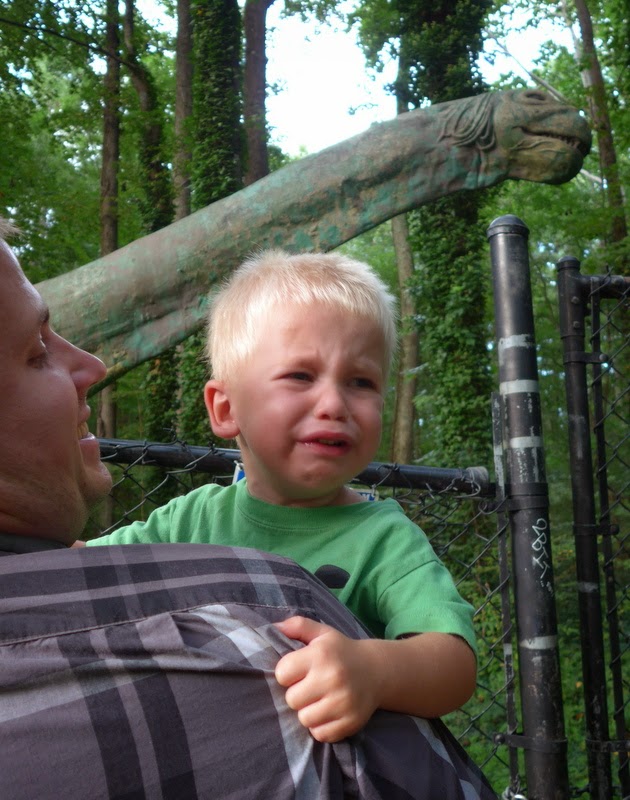 Andrew's always been a bit of a tease when it comes to babies and dinosaurs... 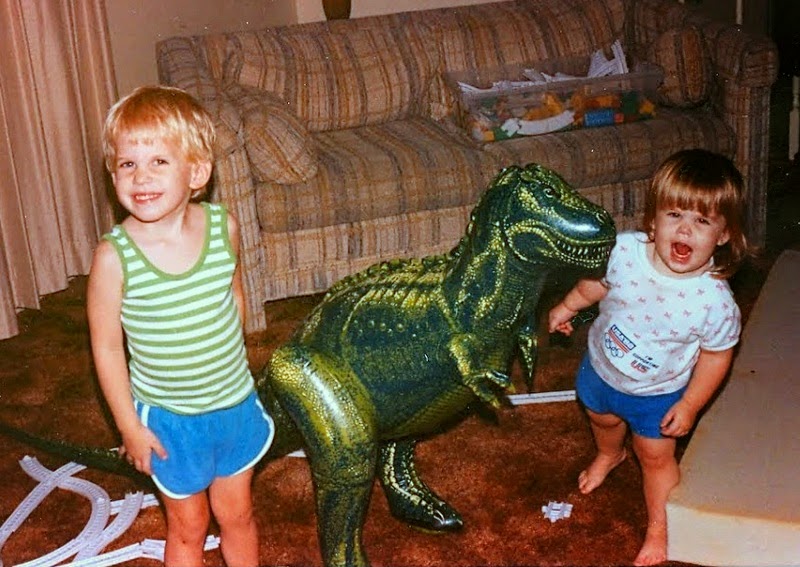 Once Benjamin got into my arms he felt a little safer but I wasn't sure if he'd ever let me put him down again. He was so scared he was shaking and he wrapped his arms and legs around me like a little baby monkey...or, you know, like a little baby human. 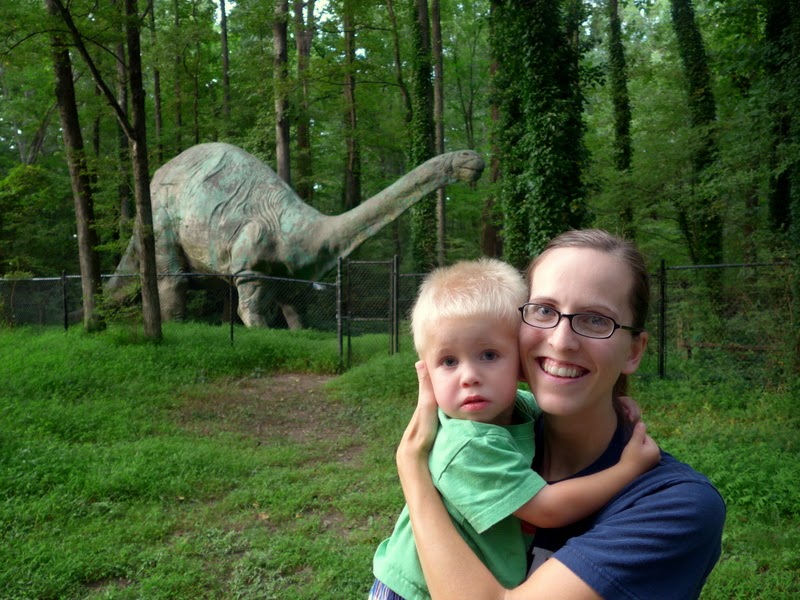 Here's one last photo of brave Rachel with the brontosaurus behind her (Miriam wasn't too sure about wanting her picture taken with that beast behind her, either (not after she heard the kind of noises it/Daddy can make)): 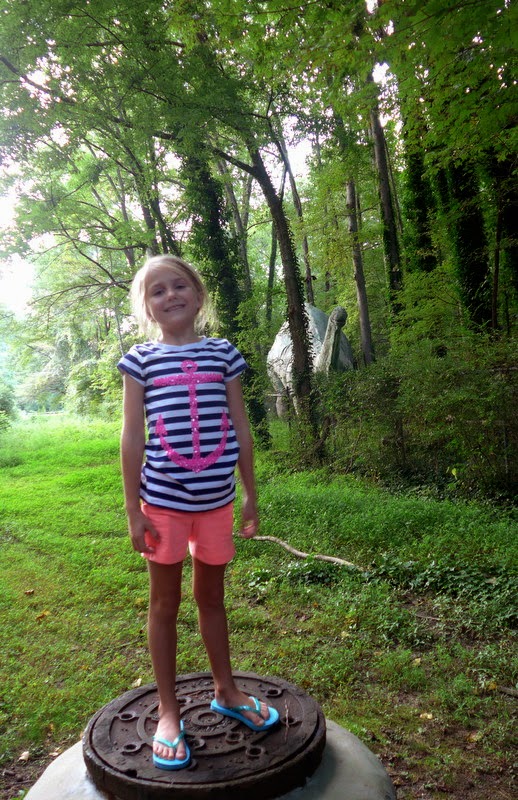 To make up for their father teasing them so mercilessly, I suggested we get a few wiggles out at the playground before heading home, so that's what we did! 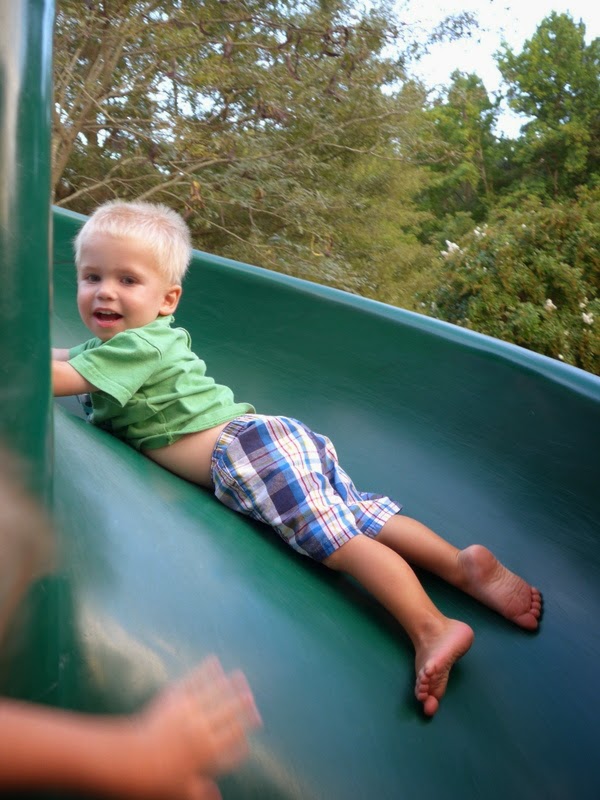 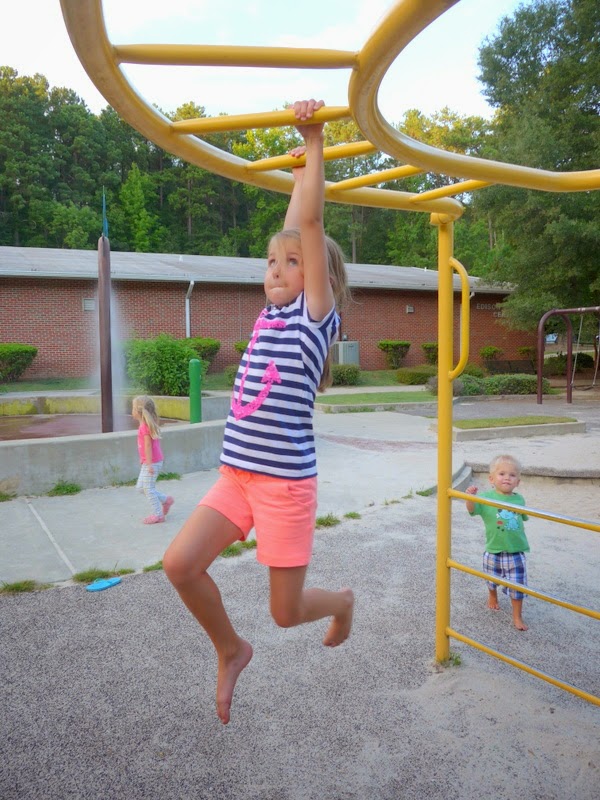 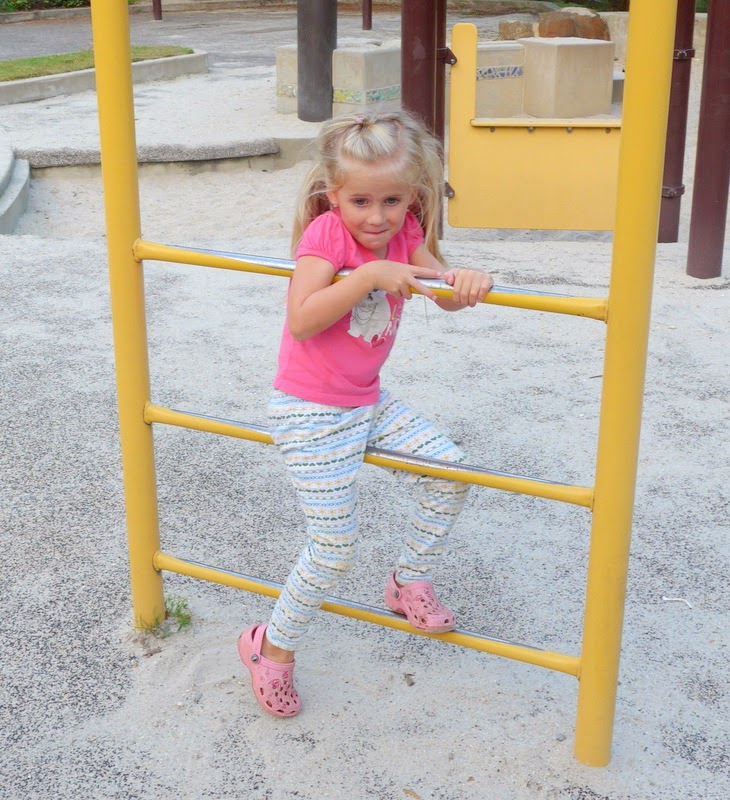 I'm sure this will be a repeat activity once Benjamin gets over his new-found fear of brontosaurses.
Posted by Nancy at 10:06 PM