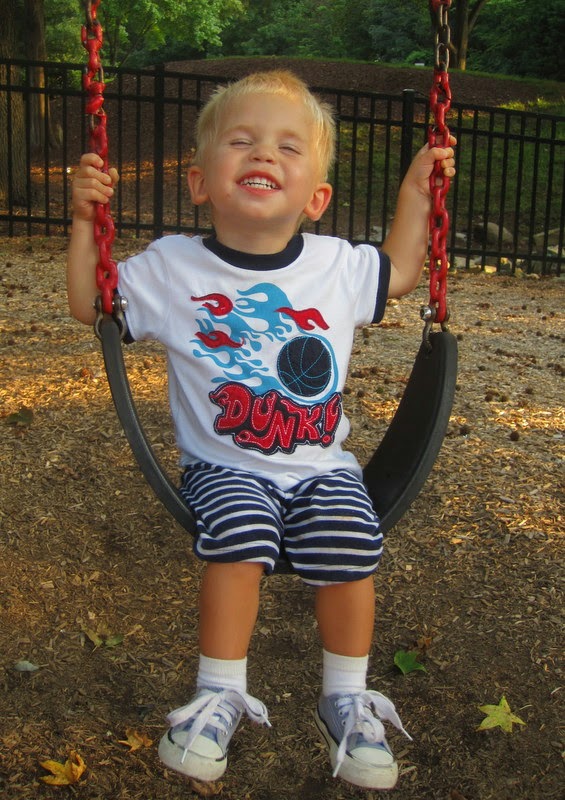 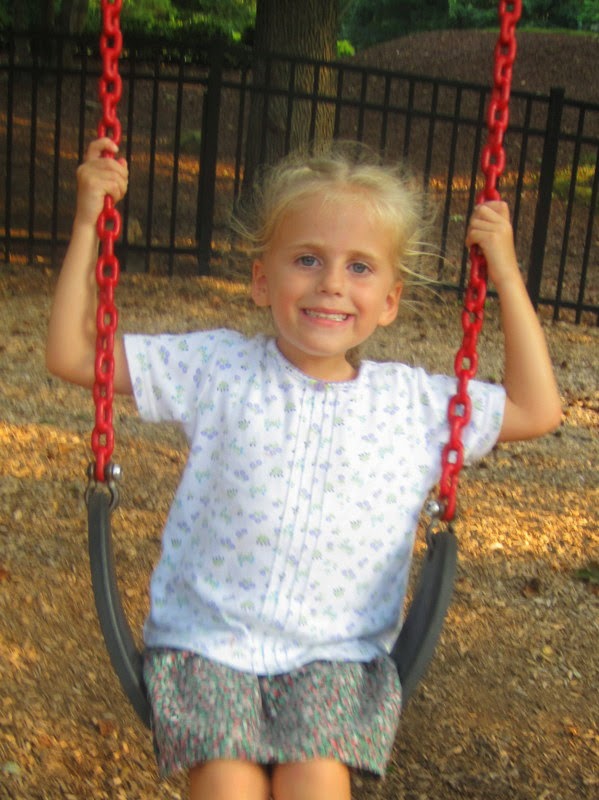 The kids spent quite a long time bouncing on the bridge together while I silently prayed that no one would break an arm (because sometimes that happens on this bridge (more specifically it happens off this bridge when gravity helps its victim find the ground)): 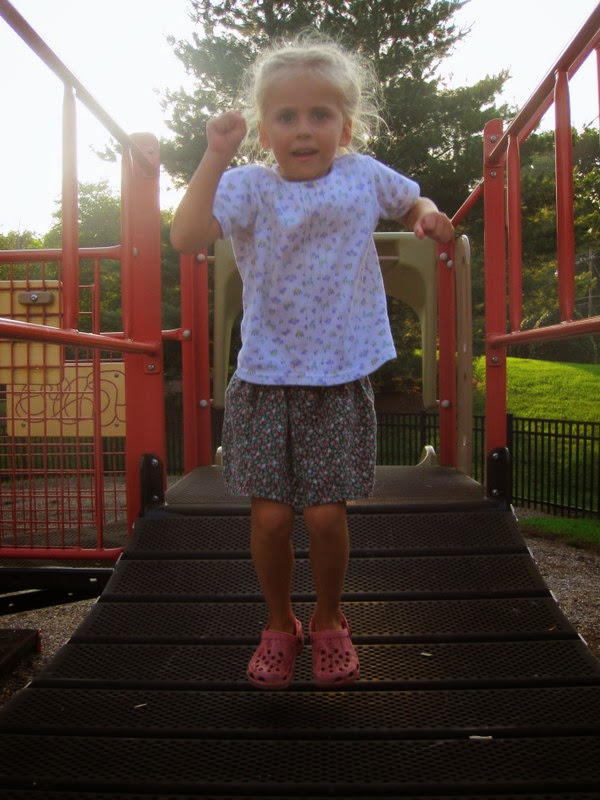 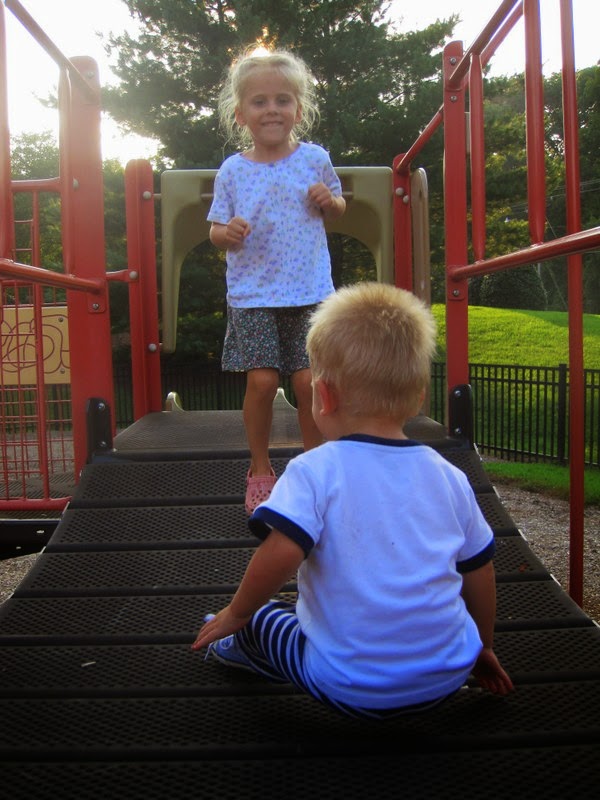 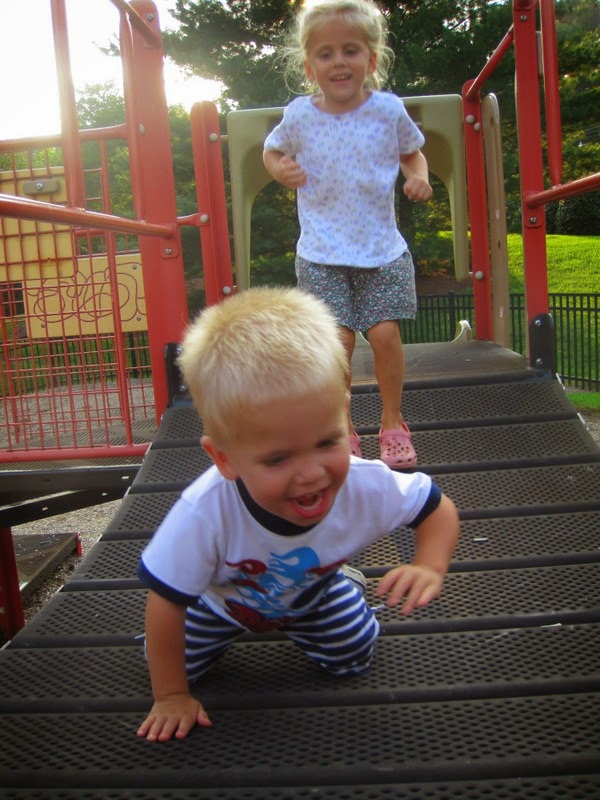 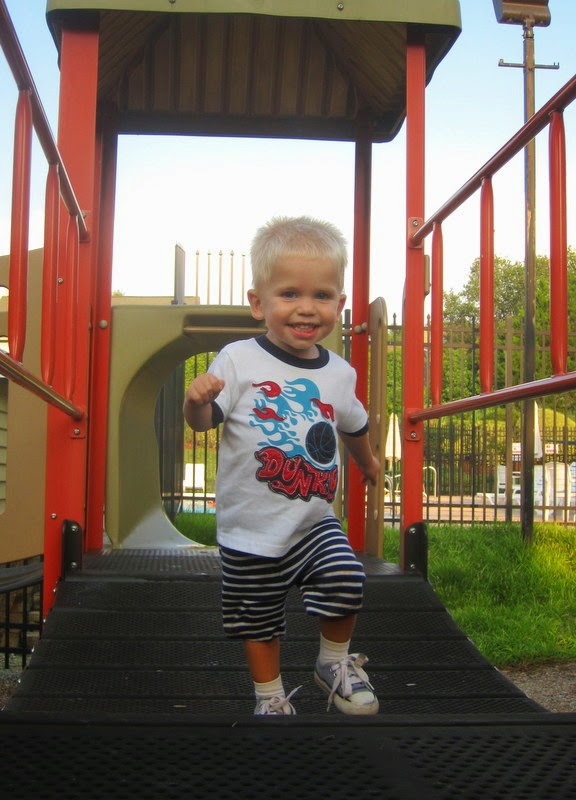 And here's Miriam being goofy: 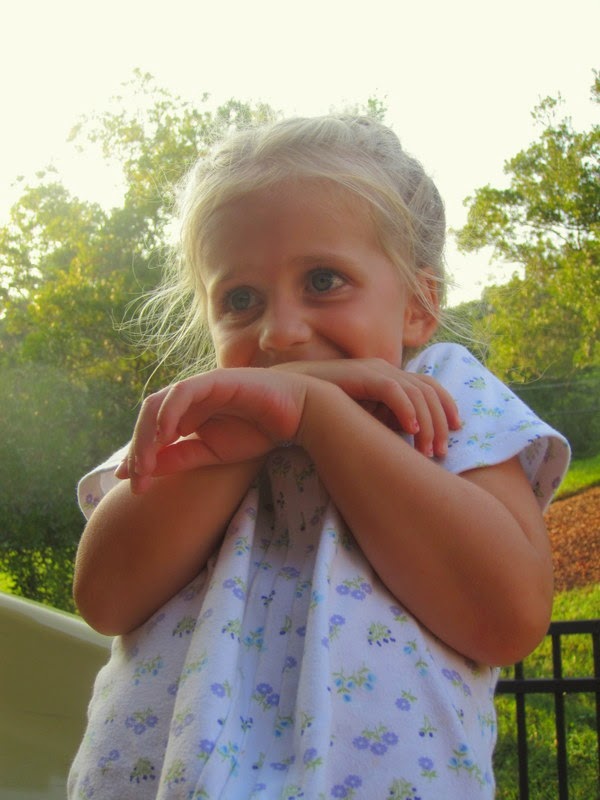 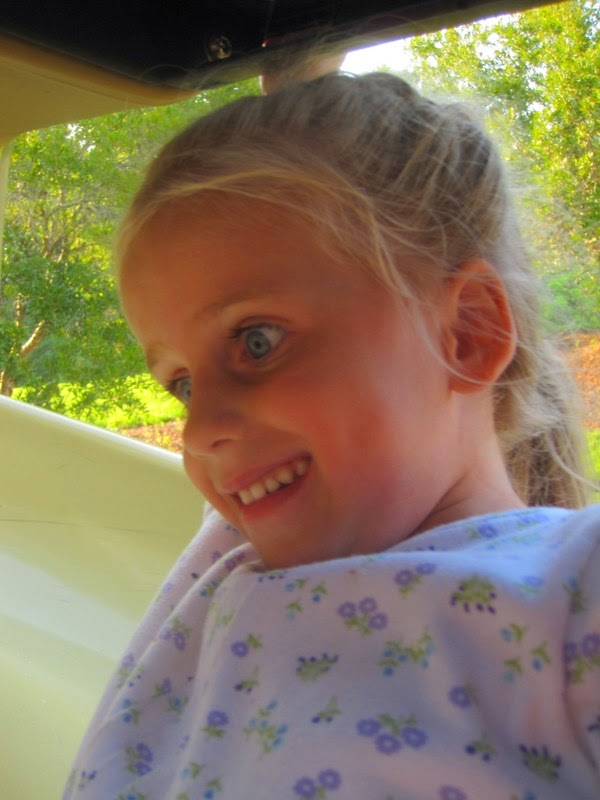 And here she is asking me to watch her on the pole: 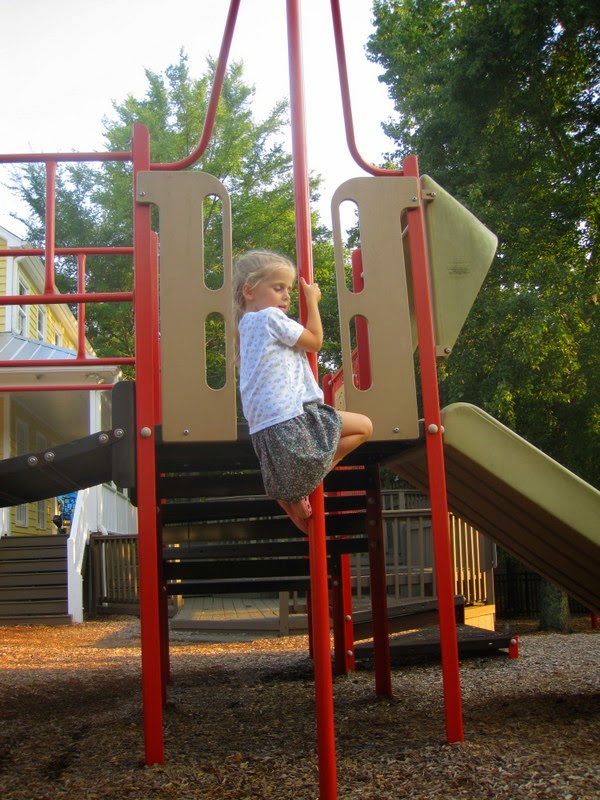 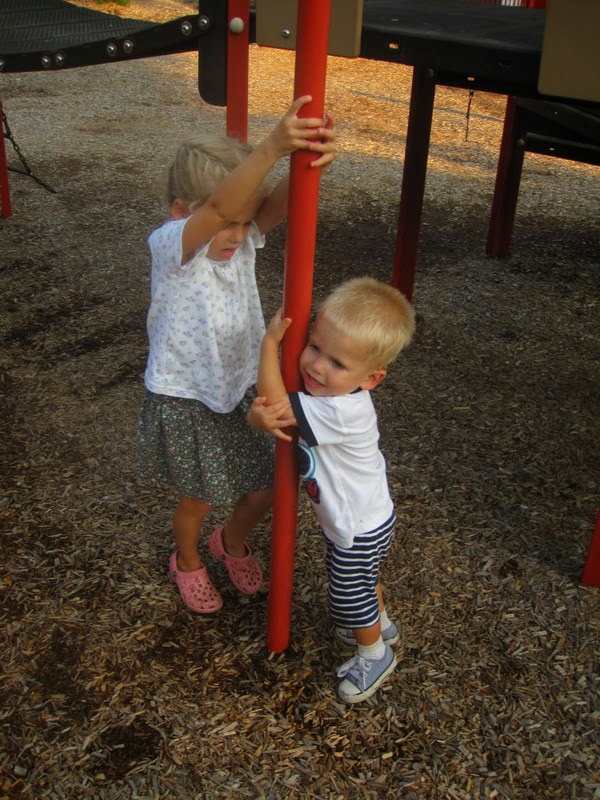 She tried peeling his arms off the pole. 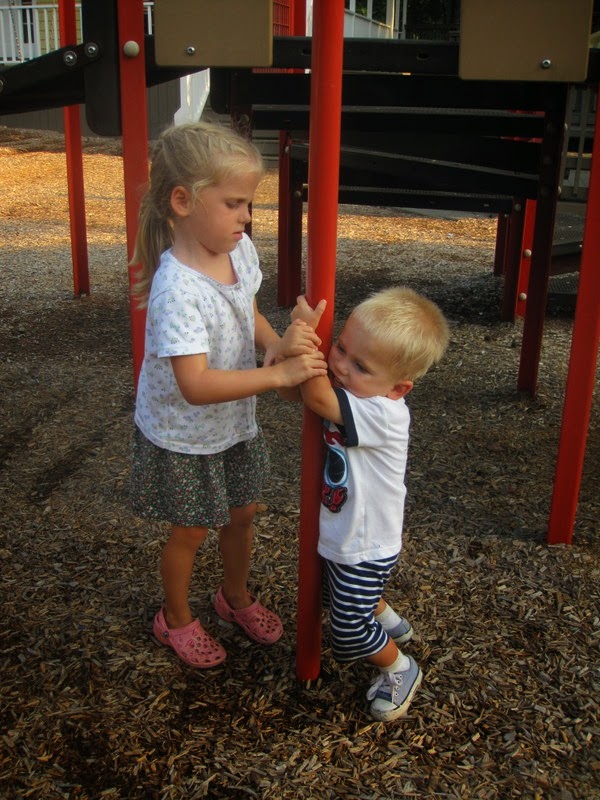 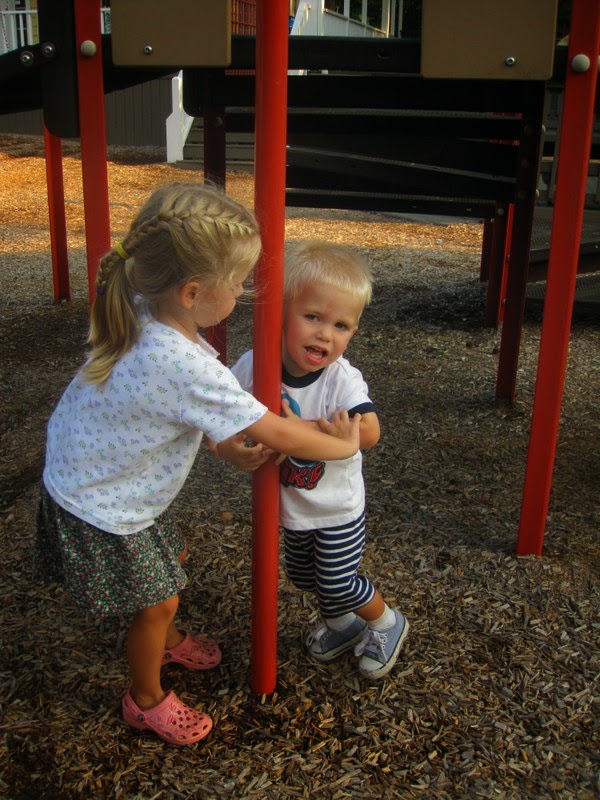 When that failed she shouted, "Fine! I will just climb the pole with you there! I don't care!" And then she proceeded to squish him as hard as she could. 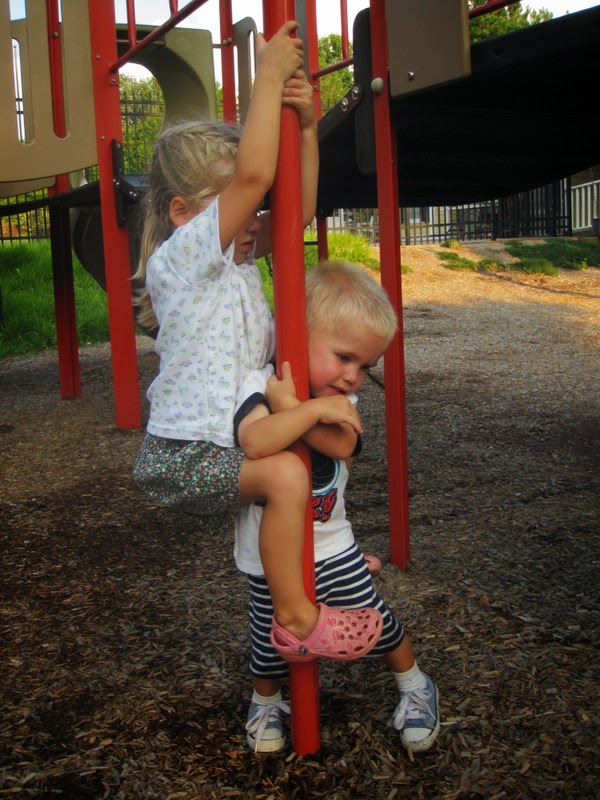 Now it was Benjamin's turn to be unimpressed... 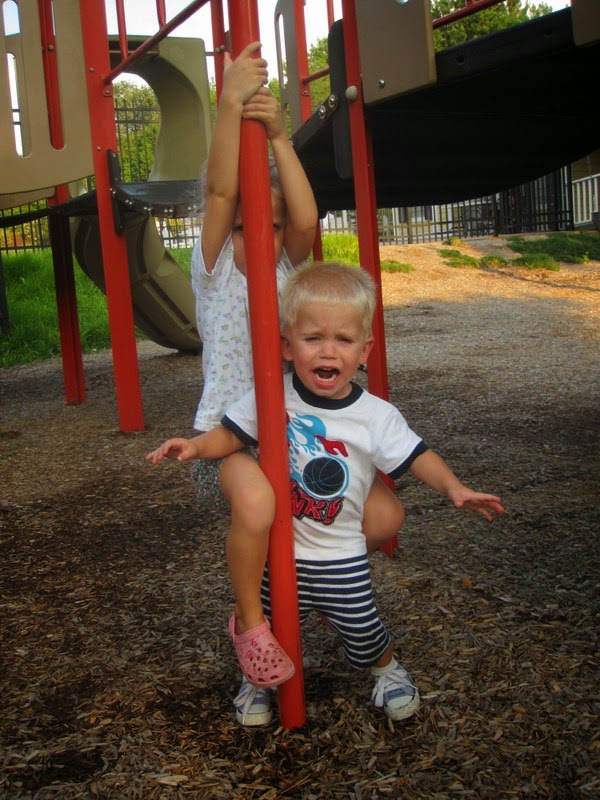 He soon found an alternate activity and was back to being as happy as can be. Nothing keeps this boy down for long. 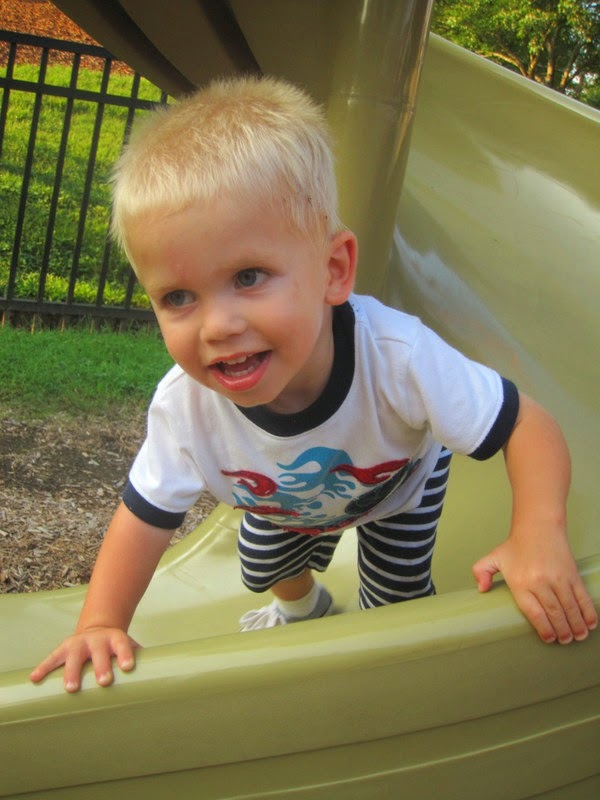 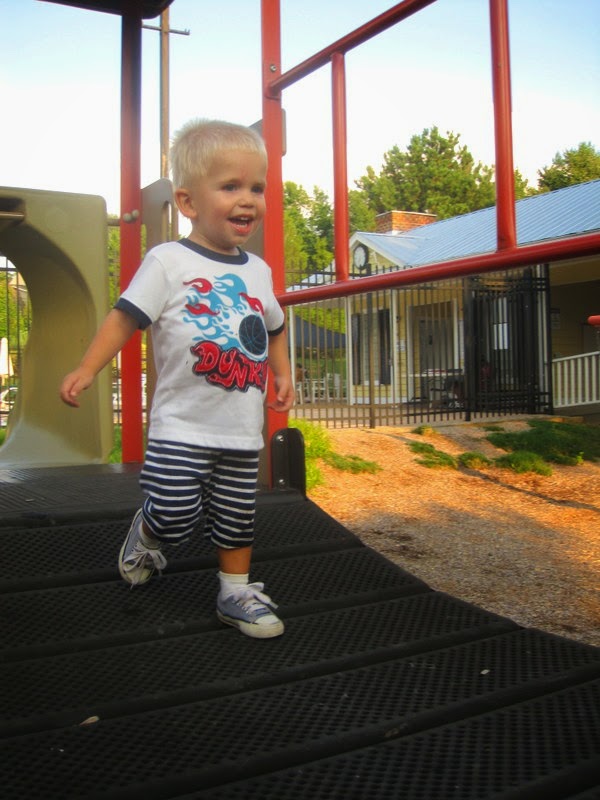 We finished up our park visit with more bridge jumping. 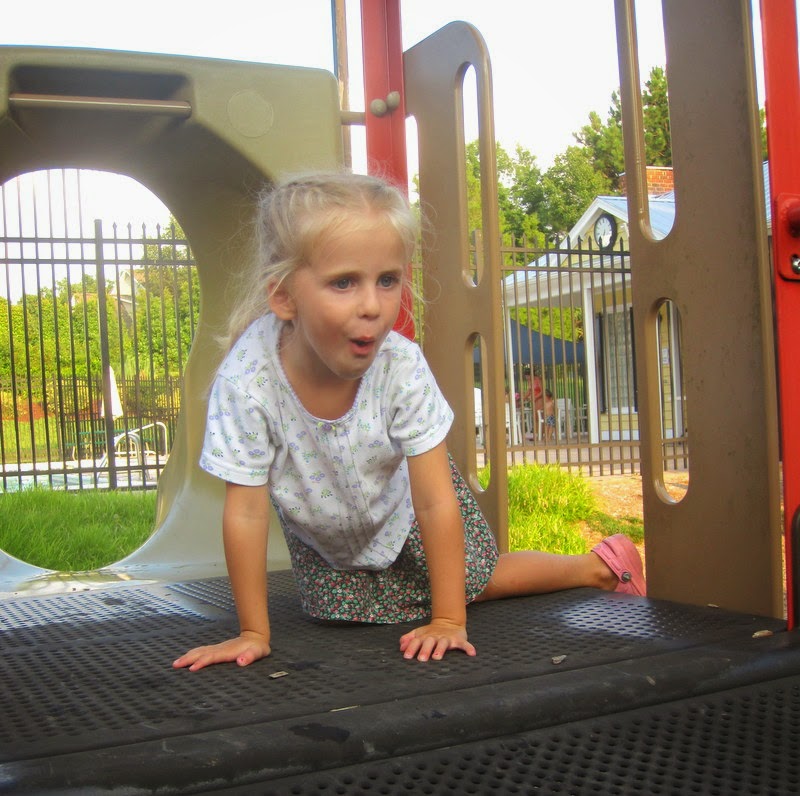 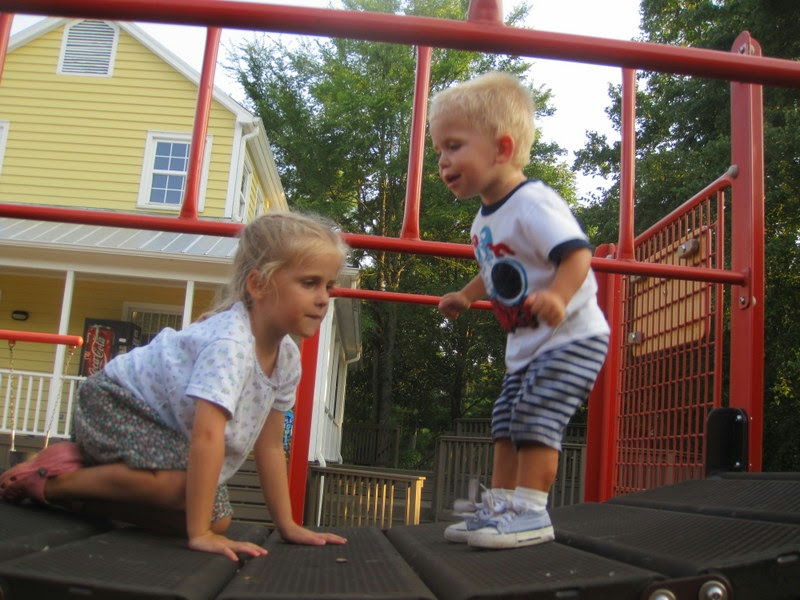 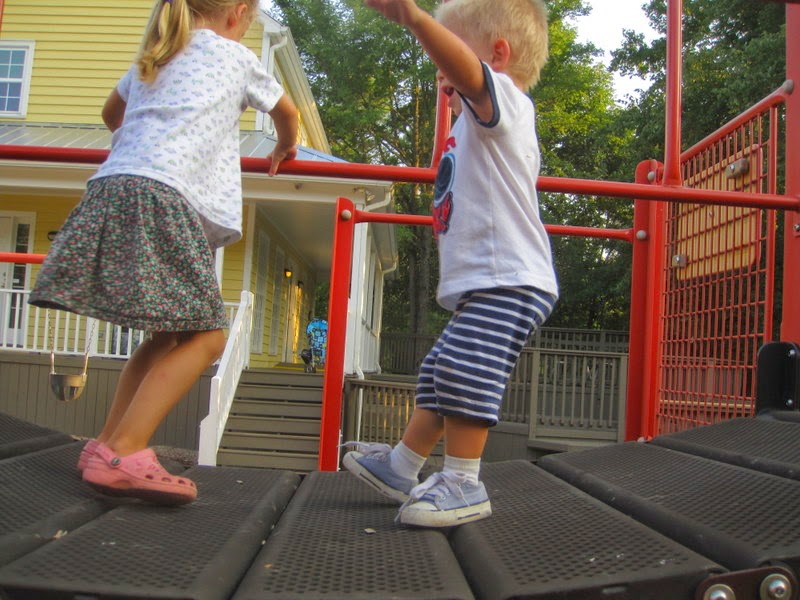 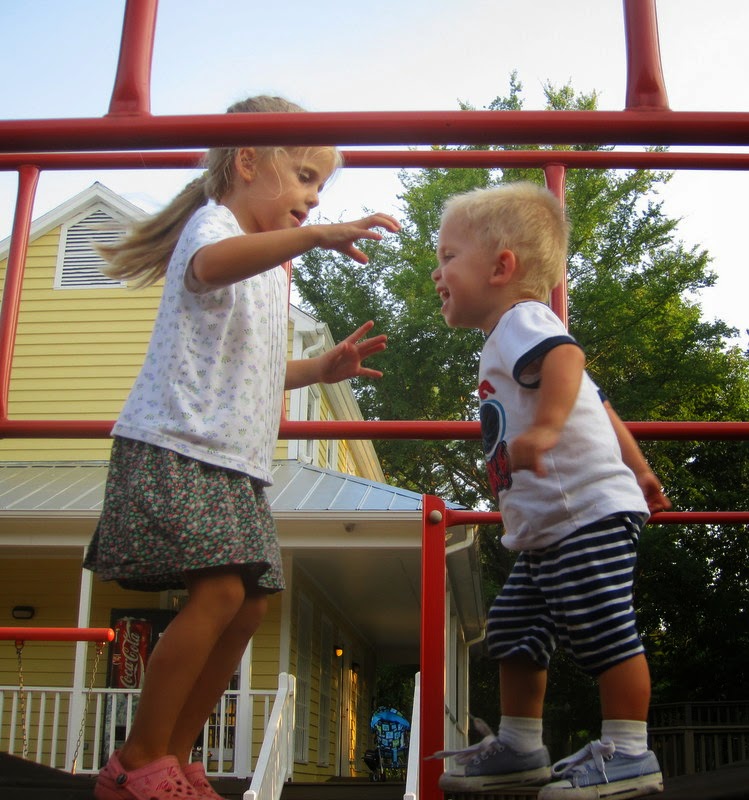 Benjamin insisted on walking on the curb most of the way home which mean we were traveling very slowly. Miriam got bored and asked if she could run ahead. I told her that she could and she happily took off running. I wasn't worried because she knows the way home, she knows to stay in the gutter, and we were right behind her (though admittedly the distance between us was rapidly increasing). Suddenly she stopped short and started doing all these exaggerated hand movements.

She pointed at me and waved at me to hurry up. I waved back at her and told her to go on ahead. She shook her head no and gestured with her arms, throwing them wide open a couple of times to emphasize whatever it was she was muttering.

I caught up to her and we walked up the hill together. Then she said, "Mom, I talked to a stranger, but I think it was okay because it was a neighbour and neighbours aren't really strangers."

"It was probably okay," I said. "What was your conversation like?"

"Well, she just said, 'Stop! Where are your parents?' and I said, 'My mom is coming,' and then she said, 'Well, you wait right there for your mom. Don't go running off!' So that's why I just had to wait for you," she said.

"Hmmm..." I hemmed because it's possible we'll be discussing this book at a book club tomorrow and as a parent I try to be as free-rangy as possible (this is one of the only "parenting" books I've read because a lot of "expert" advice drives me a little bonkers). "Well, I'm glad that you were respectful. And that was certainly a fine conversation with a neighbour—she didn't ask you to come inside her house or car or anything, so that's okay—but you had my permission to go ahead and you could have told her that."

"Well," she gulped. "It was a little bit scary. I just didn't want to go ahead anymore after she told me to stop."

I had to roll my eyes a bit over the situation. Had she been crying, or if she had looked remotely lost, stopping her would have been a different matter. But she was walking with a purpose—her head was held high, she knew where she was going, and she felt proud to be leading the way. And then all that was taken away from her.

She hadn't even left my sight!

Oh, well...let's just say that I'm not with 68% of Americans on this matter. By the time I was nine years old I was in charge of walking my little brother (and his friend Billy...Ray...Cyrus (that's not his real name—his name was just Billy but my little brother would sometimes call out to him from the balcony, "Billy! Billy Ray! Billy Ray Cyrus!" when he wanted to play)) to school and home again (or just home or something...I can't remember if kindergarten was full day or half day or if we got dropped off in the mornings but we always walked home—always). It was a half-mile walk...we went through the woods...we crossed streets...

So not only was I unsupervised but I was in charge of supervising children smaller than me.

And nothing bad ever happened.

And the odds really are in our favour (today) that nothing terrible will happen.

But I suppose I should save most of everything else I have to say on this topic for tomorrow night.
Posted by Nancy at 12:38 AM