We were at the library last week when I saw an advertisement for a Fancy Nancy Tea Party. I showed Miriam the poster and she jumped up and down with excitement. We marched right over to the children's services desk to register and Miriam has been looking forward to our outing ever since. 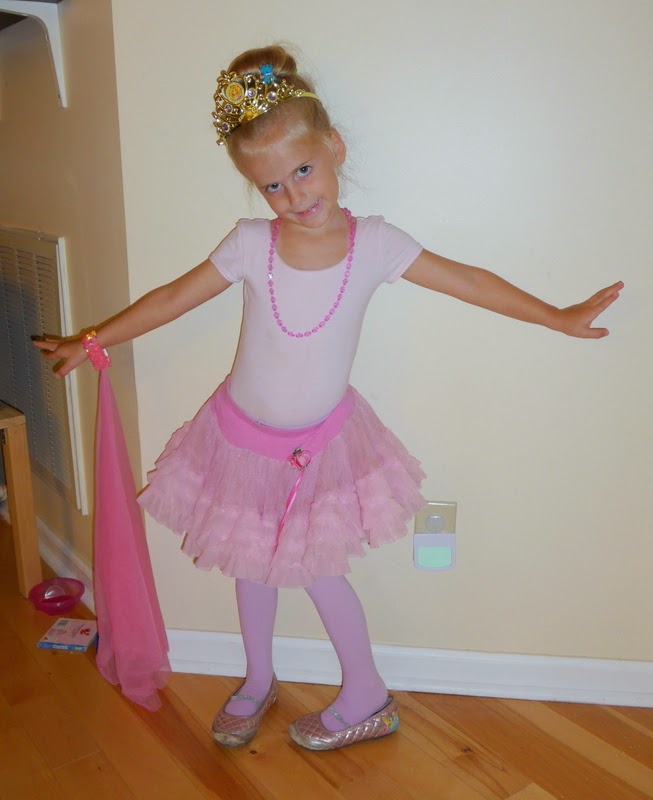 As you can see she settled on a ballerina-princess motif (that's a fancy word for theme).


I have never heard a child ask "When's it going to be August?" so many times in my life. Probably because nothing exciting happens in August. Ever. But the Fancy Nancy Tea Party was in August and that was more than exciting. This gala was galvanizing!

Finally the calendar flipped and it was August which meant Miriam only had one more day to wait until the tea party. She could hardly sleep last night (seriously—she was still up at 10:30) and when she woke up in the morning she was bright-eyed and bushy-tailed. She rushed through her breakfast so she could properly prepare for the afternoon's outing.

We left a little early because Miriam was absolutely anxious (that's a fancy word for impatient) to be on the road and also so we could return our library books and select new ones before the party. Once we filled our library bag with charming tales, we went to the activity room, which was arrayed (that's a fancy word for decorated) in pink and purple.

The first activity was story time on the carpet—a Fancy Nancy story, of course. When that was over we talked about tea party etiquette (that's a fancy word for manners). The girls learned how to say merci for 'thank you' and s'il vous plaît for 'please' because Fancy Nancy adores French (it sounds so fancy)! Then we decorated butterfly placemats and chose a spot for tea. Each girl had a feather boa waiting for her on her chair. That was rather a fun surprise! 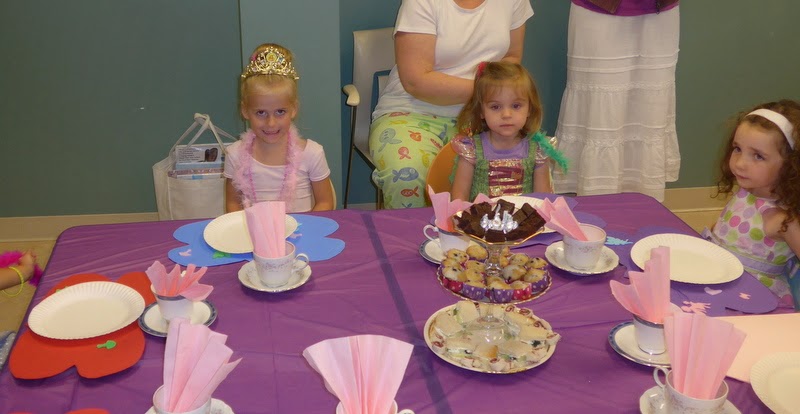 One of the librarians brought in some serving trays her mother had made for her wedding reception, as well as both her grandmother's sets of china! She didn't even seem nervous to have a bunch of 3–5 year olds playing tea party with her family heirlooms (that's a fancy word for something special that someone else in your family used to own (there's really not a synonym for that, is there?)). Not a single dish broke, though there were a few close calls. 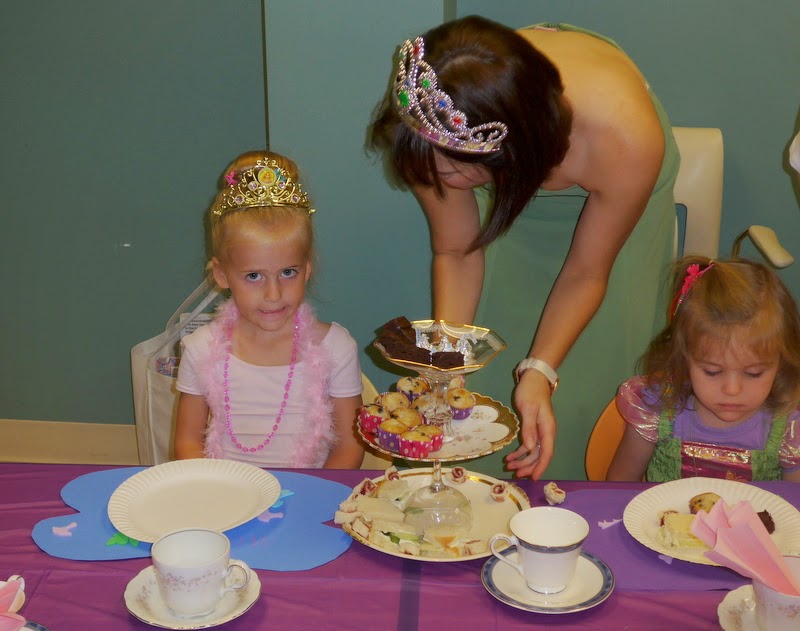 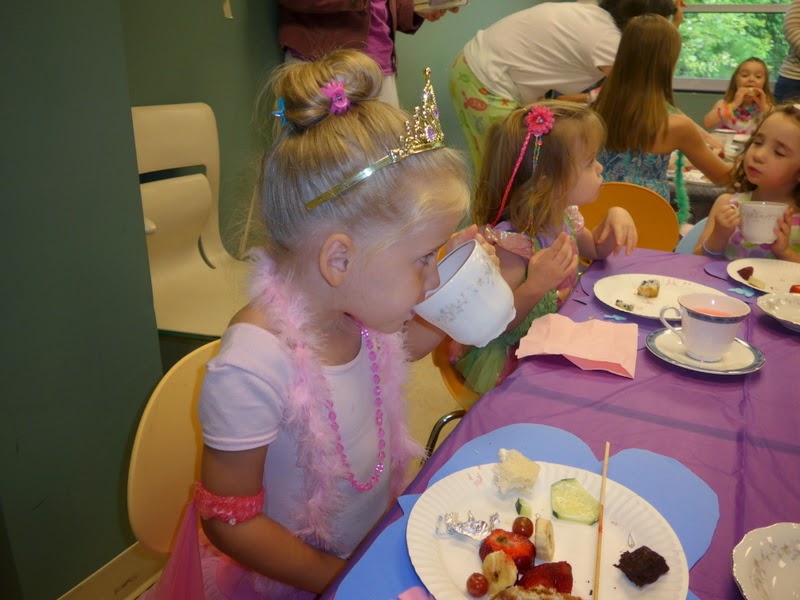 Instead of tea they had a big jug of raspberry lemonade. Miriam was very relieved because she was worried they would serve actual tea, which is against the Word of Wisdom (that's a fancy word for a law of health that we follow in our religion). We talked about it beforehand because being served sweet tea was not out of the realm of possibility since that's a rather typical southern drink. We practiced saying, "No, thank you. May I have water, please?" before we went but we didn't even have to use that line. Miriam was thrilled to have pink lemonade. 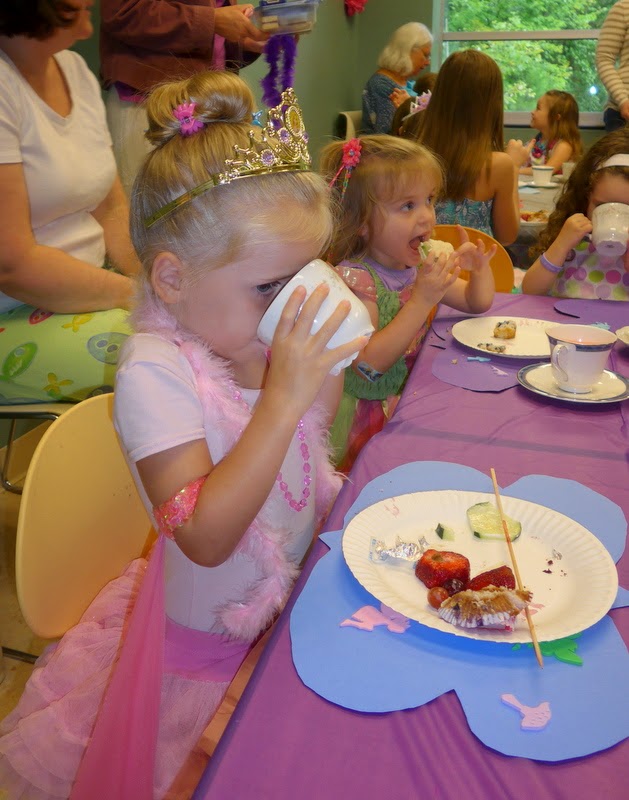 When everyone had finished eating the girls got to make fancy bracelets. Miriam did a blue-and-white pattern, though I'm not sure why since everything else about her was just about as pinkalicious as could be. 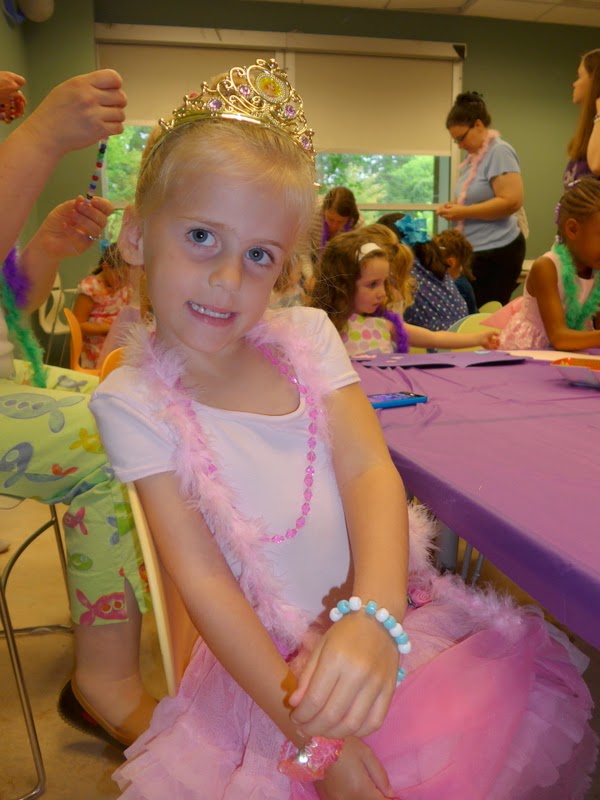 Another mom took a picture of Miriam and me together just before it was time to go. 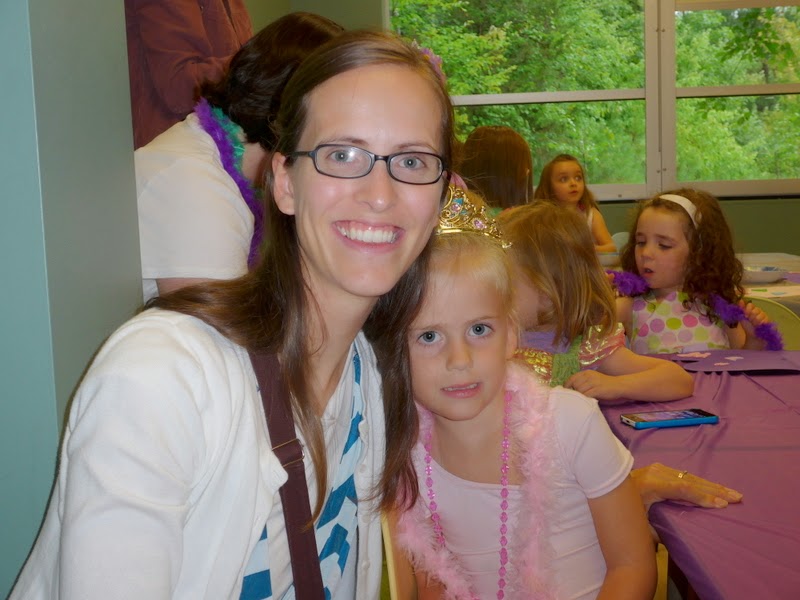 On the way out the door Miriam got a Fancy Nancy colouring page, which she coloured at home while everyone else ate lunch. She was too surfeited (that's a fancy word for full) from her afternoon tea to have room for lunch!

It was a lovely outing and she was so excited to tell everyone about it when we got home. I enjoyed having some one-on-one time with Miriam. Andrew and Rachel have a daddy-daughter date coming up later in the month, so this will be a happy memory for Miriam to look back on when jealousy strikes.

Miriam continued to be fancy when we arrived home. She set the yoga mats up in the living room so she could practice doing gymnastics but her bun kept getting in the way of her summersaults so she started taking it out, saying grandly, "It will be gooder if I just take my hair out. Then I will be able to summersault with greater ease."

I just smiled as I thought to myself how awesome that was. My four-year-old used the words 'gooder' and 'greater ease' in juxtaposing (that's a fancy word for side-by-side) sentences. Could life get any better? Probably not.

I forgot about this until we were rehashing the day over dinner and someone burped...

When we were walking out of the library to the van, Miriam sighed with relief.

"Phew!" she said, "I didn't even burp! I was worried that I would burp but then I didn't!"

I thought that was a funny thing to say so I asked her why she was so relieved.

"Mom, I just can't remember how to say 'excuse me' in French!" she lamented.

Had she burped at a fancy tea party it would only be proper to excuse herself in French, I suppose.

And now she's super excited to get on Duolingo to start French lessons.
Posted by Nancy at 3:37 PM