Rachel's been doing a charming unit on the states of matter at school. I've been impressed, truly. Her teacher does fabulous science lessons. The other day Rachel brought home a little poster she'd made to show how the particles of solids, liquids, and gases behave (which she wants to keep forever...but it's a paper with dried beans glued on it, so...):* 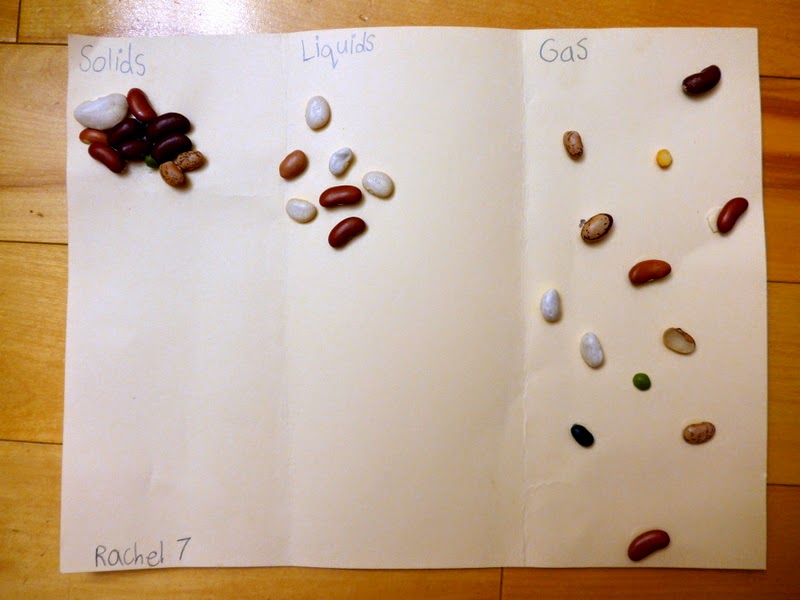 We've had several dinner conversations about matter and particles and how elements combine to form certain chemicals and so forth. It's been fun!

At dinner a few nights ago Rachel fell off the bench—something our family has managed to avoid for quite a long time (don't cry when you see how little my kids were two years ago). She managed to catch herself, which was impressive considering how quickly she fell. Still, she started making terrible noises. At first we thought she was crying but really it was only uncontrollable laughter.

"I was just putting my arm down to lean on it," she gasped out between peals of laughter. "But I didn't know how close I was to the edge of the bench! I thought I would put my hand down on a solid, but I put it down on gas instead!"

With that you'd better believe Andrew and I cracked up, too. Those pesky gas particles, flowing freely wherever they may!

*Just thought I'd clarify that this is not a frowny face. It's really just a parenthesis followed by a colon (followed by an asterisk).
Posted by Nancy at 12:00 AM