Miriam went into Teach Your Child to Read in 100 Easy Lessons knowing her letters and their coordinating sounds, thanks in large part to a song that Rachel learned in preschool and that we now sing all the time in our house.

My girls know this song forwards and backwards and in sign language as well. Benjamin knows it a little less well but loves it. I think he alone accounts for at least a thousand of the 250,000,000 views. When we sing it—and we're not trying to do the sign language for it—we throw in whatever words we can think of that start with any given letter (we don't do the sign language when we do it this way because our vocabulary isn't big enough to sign whatever our hearts desire).

Between this song and Letter Factory, my kids have phonics down pat by the time they want to learn how to read, so I have to admit that the first few lessons are rather boring. Rachel refused to do them at all. We'd fight and fight and fight our way through them until I decided the fight wasn't worth it. No more reading lessons for Rachel.

I still read to her everyday. I simply stopped trying to make her read, which is weird because she wanted to learn. She wanted to learn but refused to be taught. So, we just read every day.

Rachel has always been a lover of stories. She requested stories all day long. "Tell me a story. Tell me another story. What else about this? What else about that?" In fact, she's hardly ever played with toys because all she wants is a good story. Playing with toys has never been something she's found very fulfilling. She once had to write a story (in kindergarten) about her favourite toy. She wrote about her pink blanket. "My favourite toy is my pink blanket..." she wrote.
A blanket is not a toy, but to Rachel it was because it wasn't a book. She probably would have written about books if she thought they qualified as toys. Books clearly aren't toys. But blankets are akin to baby dolls and teddy bears, so...a blanket is a toy.

Her kindergarten teacher suggested that I follow along with my finger as I read to her, so I did. We read and read and read and I pointed and pointed and pointed. Soon Rachel was reading simple stories on her own and before I knew it she was racing through books. In the five weeks between finishing kindergarten and entering grade one she read the entire Magic Tree House series.

She still has a voracious appetite for stories.

Miriam does, too, but she actually likes to play with things, too. She's a child who can go into her room and create a magical world filled with disney princesses and dinosaurs and be content for hours. Rachel was never content to be left on her own for hours...until she learned how to read. Miriam's been almost wary of learning how to read for fear that she'd stop loving to play. I assured her that it's possible to love to read and to love to play and explained that she has plenty of time for both in this last year she has at home before kindergarten.

Now that she can read she happily declared, "I'm getting in love with reading and I still like playing!"

Anyway, I'm talking about How to Teach Your Child to Read in 100 Easy Lessons. I already said the beginning lessons were easy and a trifle boring, but it's important to plow through them so your child can learn the DISTAR orthography. I wasn't entirely a fan of this when I first heard about it, but that's because I thought they'd be using completely different symbols than the child would see when reading. Instead, they see the very same letters that are in the word, they're just joined into one unit. So instead of sh being written with two letters the s and h are joined into a single glyph. Likewise are th and ph.

The vowels are written differently, too. All the long vowels have lines on top so the child knows the vowel says its name. If it's a short vowel, there's no line.

There's more to it than that, but it's not like learning a different alphabet at all. No worries there.

Then there are the weird dots between the words. Miriam wrote like this for ages because she thought it was normal: 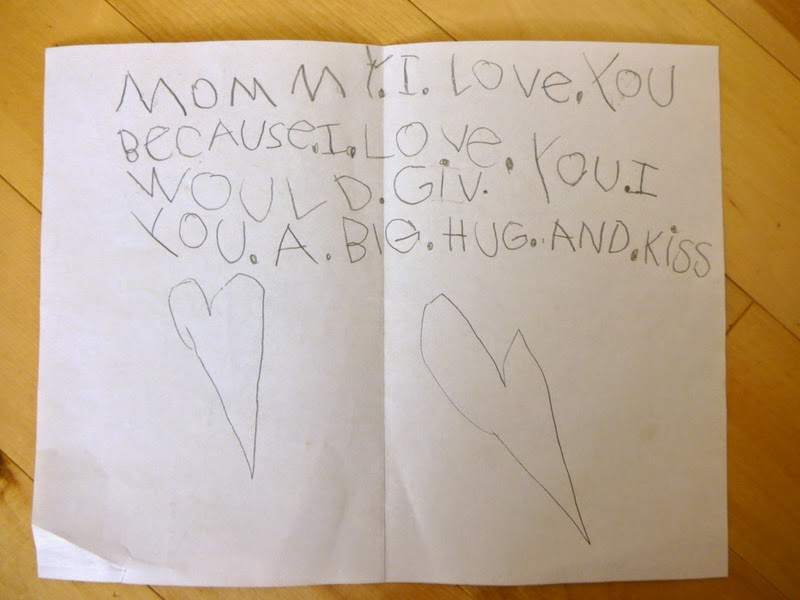 Eventually she figured out that it wasn't normal and we've been working on finger spaces ever since that day (we still don't have them down). Here's a story she wrote today: 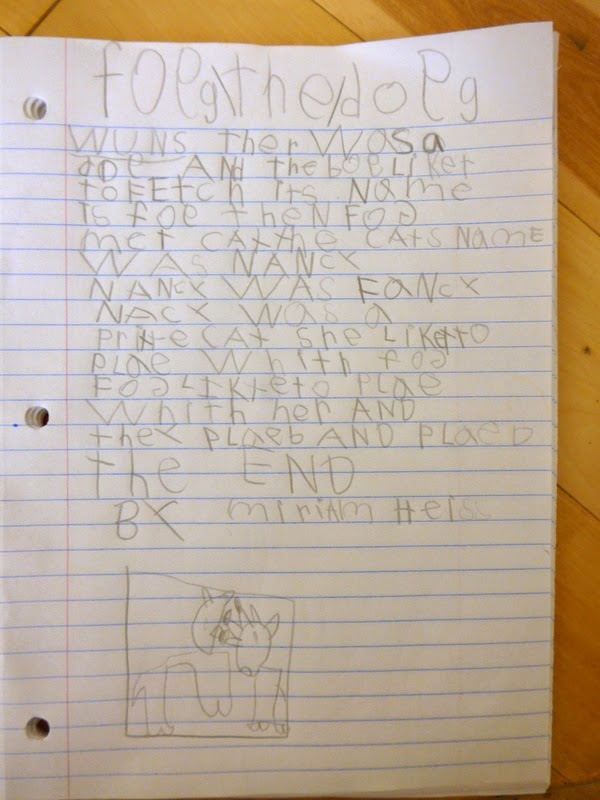 In case you're wondering, there is a pink cat named Nancy in our house. I've had her for at least 25 years and when I named her I happened to think my parents had impeccable choice of names, so I named the cat after myself. Not that I have narcissistic tendencies at all (does keeping a blog count as narcissism?).

Her writing could certainly be improved upon but—in full disclosure—we didn't ever do the writing exercises in the lessons. Miriam already knew how to write all her letters and knew the sounds associated with them and was bored by the process presented in the book and...she's four so I really don't care how well she writes. I'm sure her penmanship will improve with time. And she's writing stories...so I think she's good.

The middle lessons of the book were pretty exciting for Miriam. She read her first single-line, three-word "story" in lesson thirteen and was thrilled to pieces. The first several stories are fairly boring—like Bob Books, which I can't stand—but the accompanying pictures are fairly interesting—unlike Bob Books, which I can't stand—so that, at least, helps stave off ennui.

I happen to know that Miriam's soon-to-be preschool teacher likes to use Bob Books, but, uh, I think we're hopefully beyond that level now. We won't be using those books, I'm sure. Because I will gouge my eyes out with a spoon if we do (though that might be a slight exaggeration).

Slowly the stories get more complicated, you're weaned off the DISTAR alphabet, and then you jump into two-part stories. Miriam really liked these "cliffhangers" because they were like chapter books! Part 1 of the story would be presented in one lesson and Part 2 would be presented in the next.

Since we've already made it through the simple alphabet the "lesson" portion of the lesson is teaching little tricks—like "when two vowels go walking the first does the talking" only they never said it in as many words. I went off-script a bit for that part (something the instructions at the front of the book distinctly frown upon) and told Miriam the rule the first time we were introduced to vowel combinations and she easily applied it to the next several lessons.

Frankly, we ran out of steam a bit toward the end. I told Andrew it could have easily been called Teach Your Child to Read in 83 (or 96 or 72) Easy Lessons but he said that a book like that would never have sold because Buzzfeed hadn't been invented when it was published so it wasn't yet socially acceptable to just end your list whenever it was finished, rather than rounding it out to a solid 10, 25, or 100.

The stories at the end were silly and fun and Miriam enjoyed reading them but she hated having to read them twice (and sometimes I hated having to listen to her read them twice, but we were prescribing to the lesson plan, so twice it was and really she read it a lot smoother on the second try). I felt like it was important for her to finish the book so we could have some closure, some sort of accomplishment under her belt, that sort of thing.

She finally finished it yesterday and then danced around the living room.

We went out today to celebrate at Pelican's SnoBalls. Even though it was only 66°F (what?!) and rainy (normal) because it's summer when we say so!

Here are the kids being goofy with the head-hole sign (is there a good word for these?): 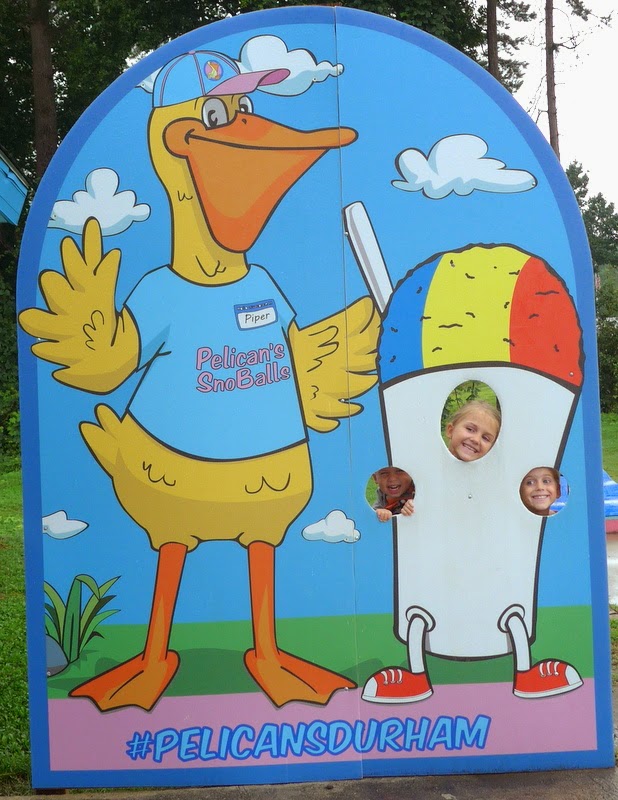 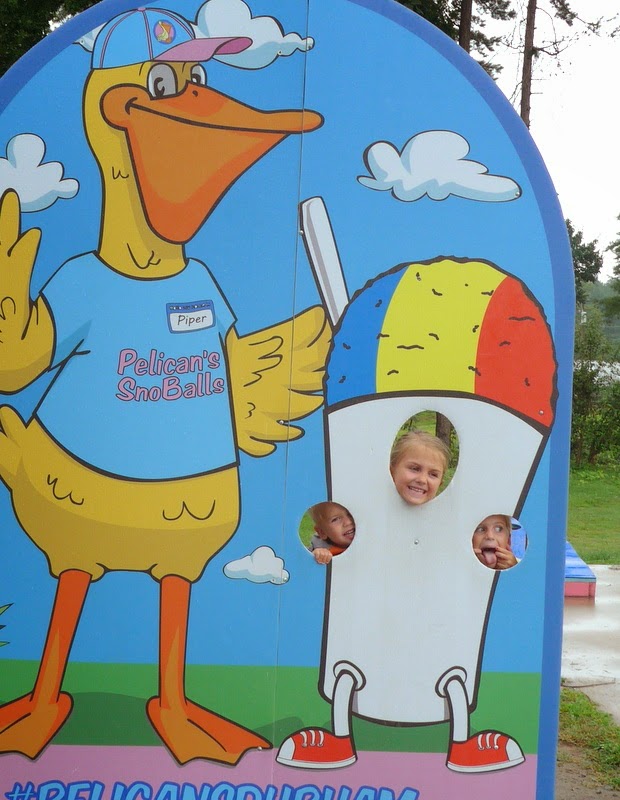 And here are pictures of everyone (but me) enjoying their snow cones (though I enjoyed mine as well): 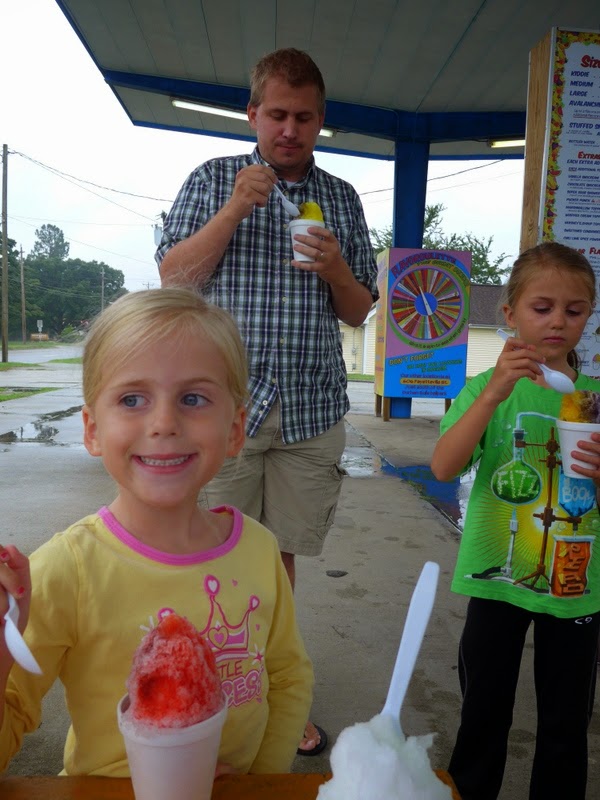 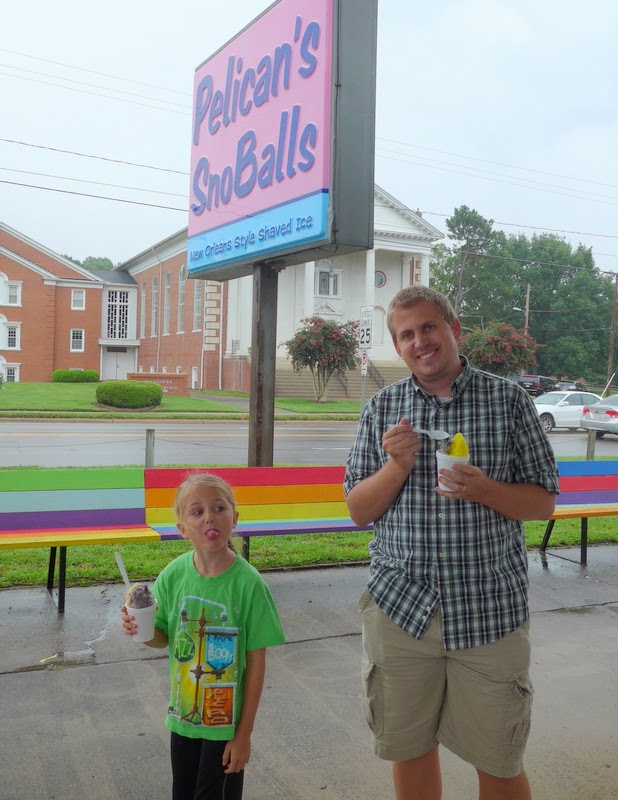 Miriam got cold and borrowed Benjamin's jacket. It fit her just fine, which is a sure sign that it won't fit him yet, even though it's 2T. 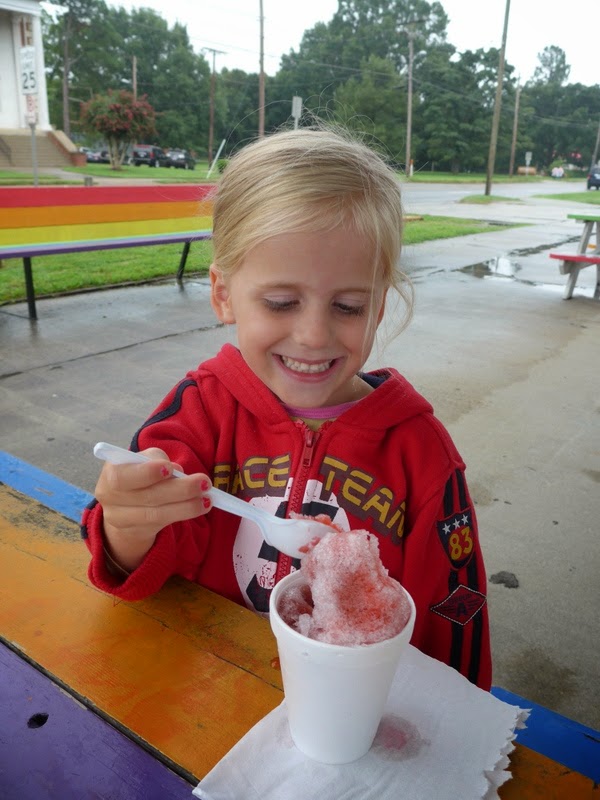 Here is Rachel laughing because Miriam fit in Benjamin's jacket. I'm not even sure we've put him in this jacket yet but I did finally retire his 3–6 month jacket and this was one of his replacement jackets that was handy. 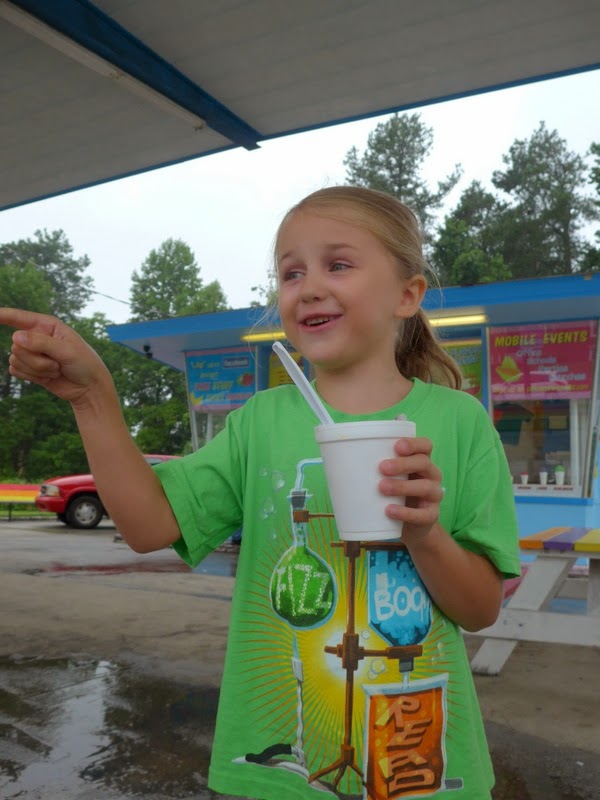 Benjamin eats his snow cone by first digging up a nice, big spoonful, and then grabbing the ice off the spoon and sticking it in his mouth: 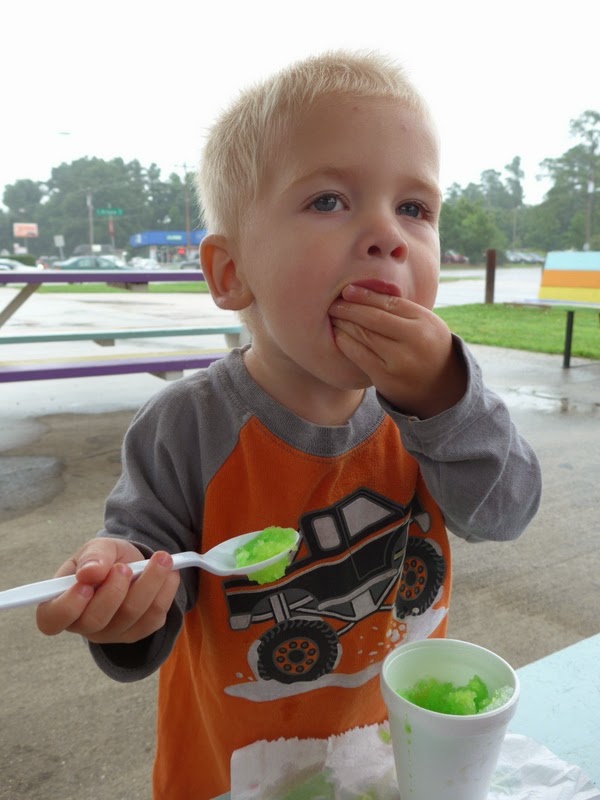 He's so close to eating properly. I can't wait for the day he doesn't make a huge mess every time he eats anything.

Here he is sneaking tastes from Miriam's cone: 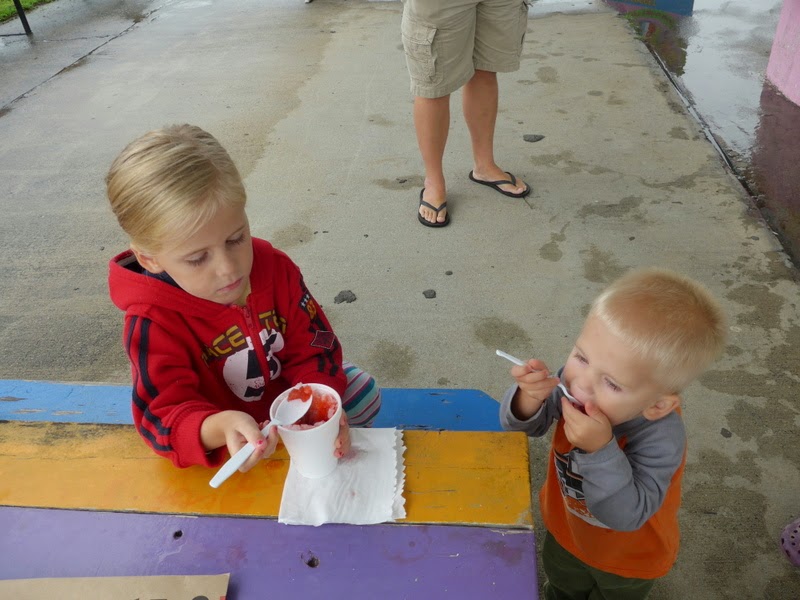 She was fine with his first few tastes but started getting upset with him after awhile.

Here's Benjamin suffering from a bit of brain freeze: 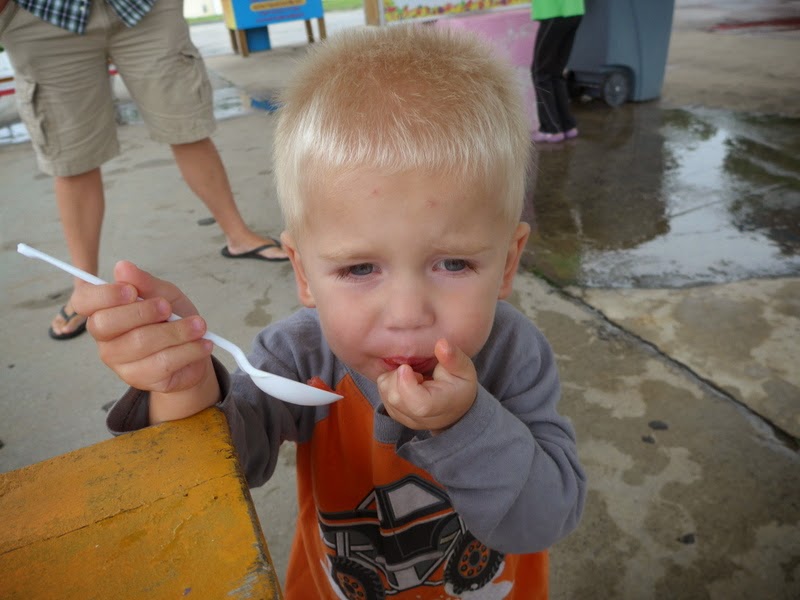 And here is what would have been the perfect picture...if I had managed to focus on...anything at all (preferably Benjamin). *sigh* 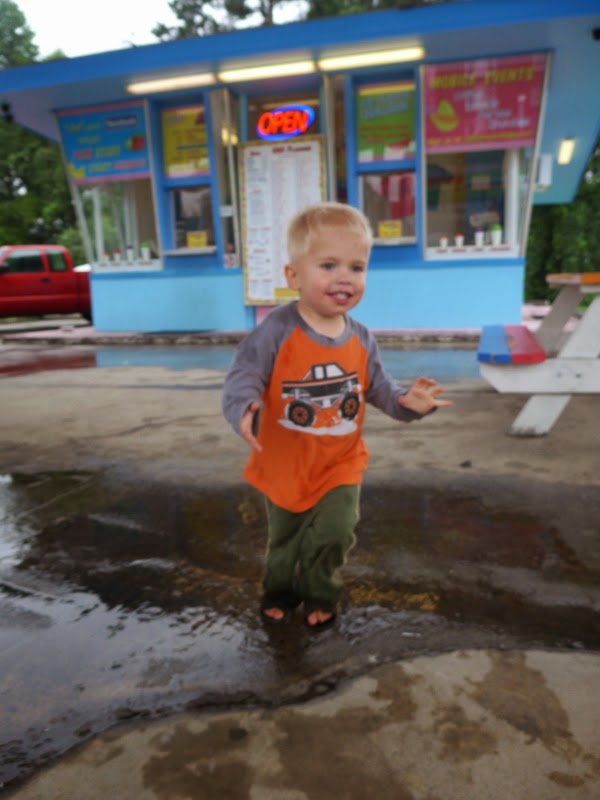 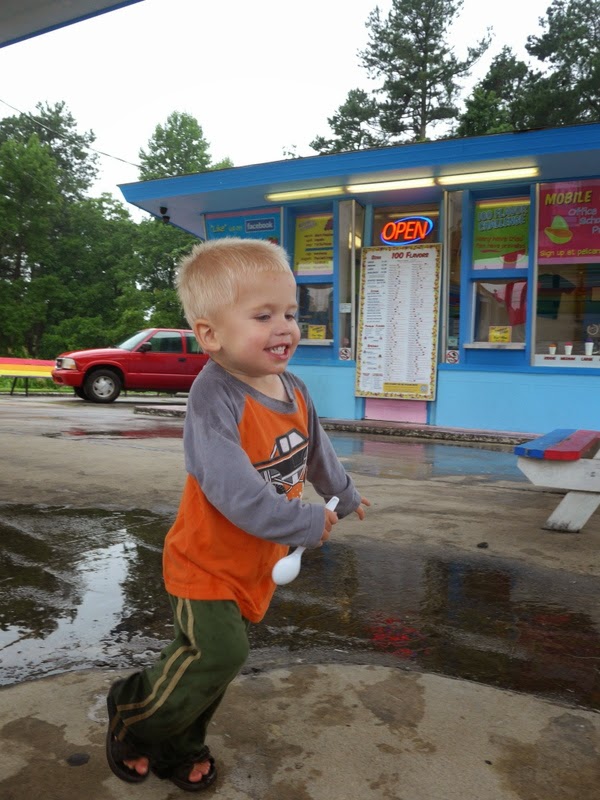 After we finished our snow cones I brought out the certificate I promised Miriam could earn if she finished every lesson in the book. This is Miriam dancing around me, trying to snatch the certificate out of my hands: 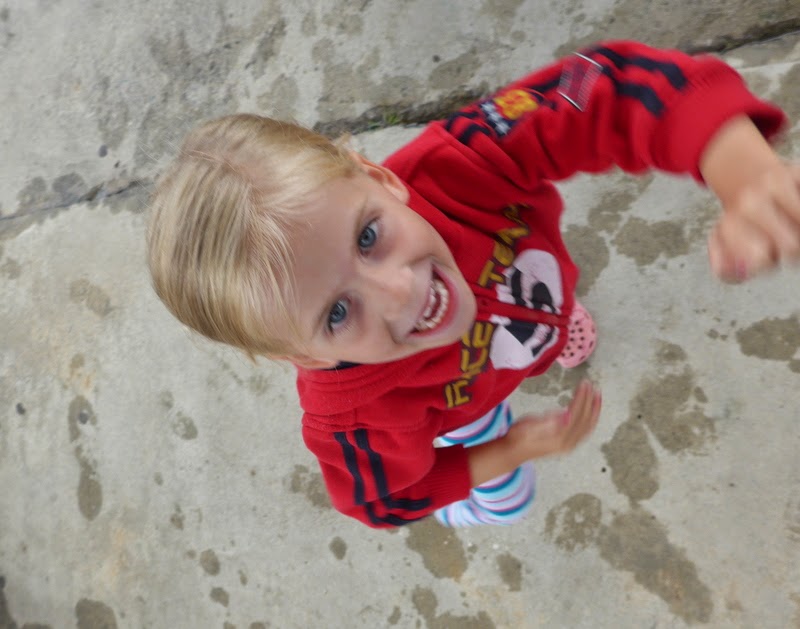 And this is Miriam reading the certificate: And here's my little super reader in all her glory: 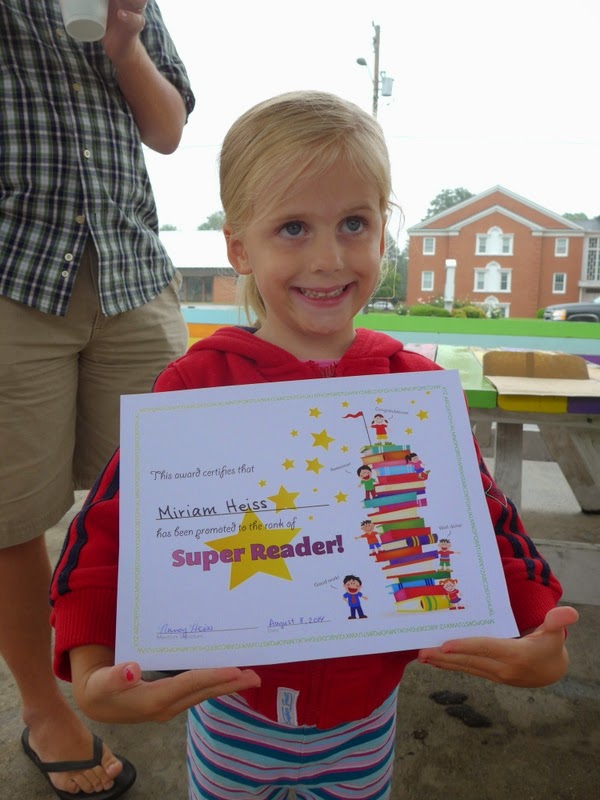 And one more shot of her looking at the camera: We were happy to celebrate this achievement with Miriam, though Rachel was a little jealous that Miriam got a certificate "just for learning how to read" because she's "a much better reader." I told Rachel that we've celebrated plenty of things (she'd already completed two years of preschool by the time she was Miriam's age—that's two more years of going to award ceremonies and preschool plays and things that Miriam hasn't even experienced) and that I'd make up a certificate for her when she finishes her goal of reading 365 novels this year (she's read 235 so far).

Miriam's still convinced that she's ready for Magic Tree House, though I quizzed her this morning and she didn't do too well she insisted that she would keep trying (she couldn't tell me what the treasure was (it wasn't gold it was...?)). She was able to tell me some interesting things she read in Night of the Ninja, however, so perhaps she is ready.

I made Andrew help me count the number of words in the first chapters of the Magic Tree House books and it seemed pretty comparable to the number of words in the stories at the end of Teach Your Child to Read in 100 Easy Lessons (at least the Dinosaurs Before Dark book). I would tell you the numbers but I forgot what they were and I can't find Dinosaurs Before Dark right now. I'm sure it's around here somewhere.

In the meantime we have plenty of other books to read!
Posted by Nancy at 10:20 PM