Because we left Palmyra earlier than we'd planned (due to inclement weather) we decided to skip Pennsylvania and instead stop in DC. We have so many friends in the DC area that we've been trying to see. This time we hit up the Chambers, a lovely couple we met when they were unmarried students in the singles ward Andrew's dad was the bishop of. It was perfect timing, too, because they announced the very same day we arrived that they'd accepted a job back in Utah. 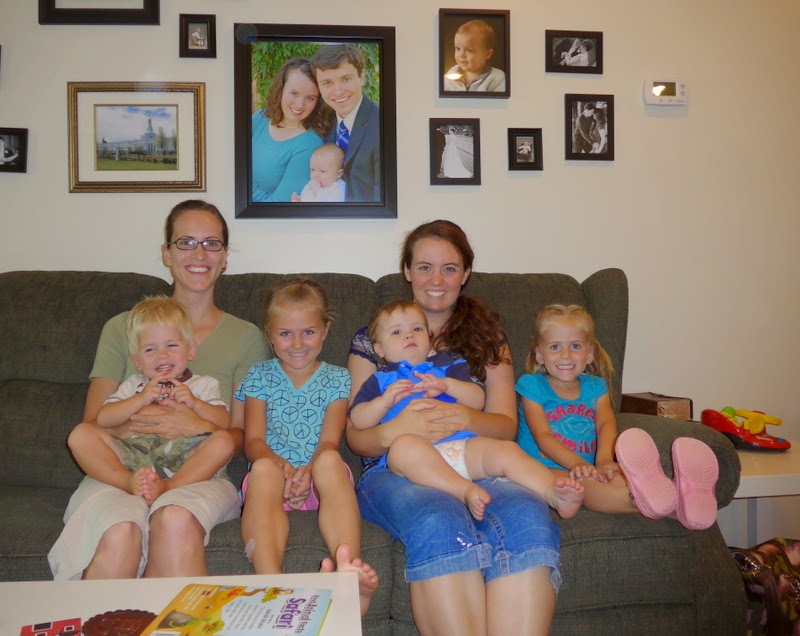 Brianna used to love playing with Rachel and Miriam—and they loved her back just as much. Now Brianna has a little baby all her own and he's just as friendly (this picture does not do his bubbly personality justice). Benjamin and Oliver decided to be friends right away.

The Chambers treated us to Cafe Rio for dinner. Cafe Rio is mostly a western states thing, but there was high demand to open a chain in Virginia—for all the expat-Mormons, I suppose. We had a lovely time chatting and eating and then went home and enjoyed their storybook collection before turning in for the night.

We watched Oliver in the morning while Brianna went to an appointment and then headed out to the Air and Space Museum. We tried to convince Brianna to come with us but she said they'd just stay home.

I'm so glad we caught them before they headed back west though!

Andrew was so excited to visit the Air and Space Museum. He was probably the most excited person in our party.

There were airplanes and space paraphernalia staged all over the floor. They were dripping from the ceiling, too, which is why they had signs like this posted everywhere: 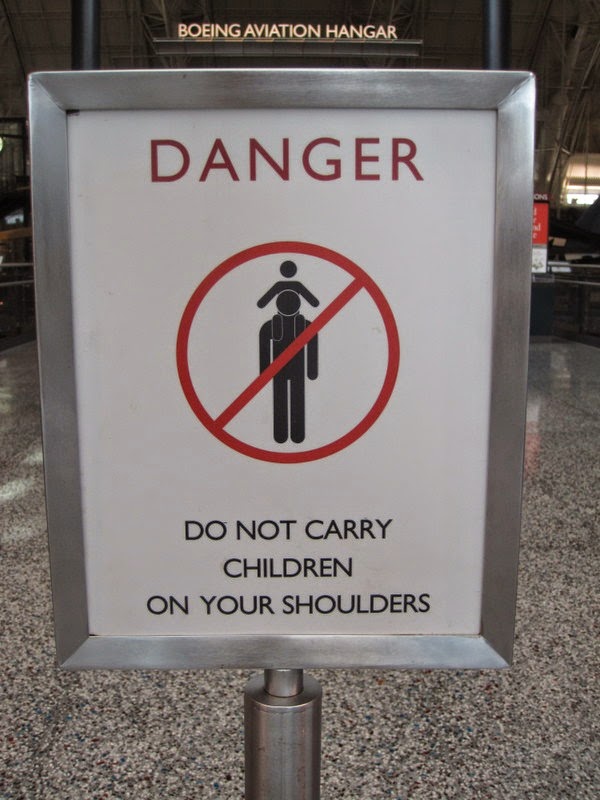 There were planes from the beginning of aviation history... 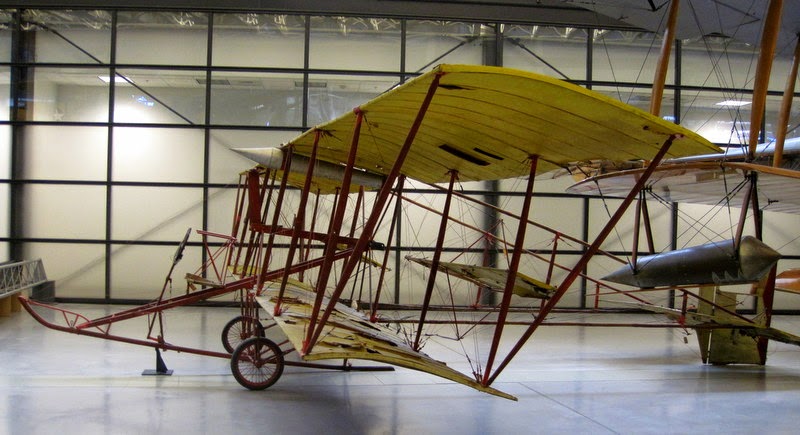 To space jump capsules used less than two years ago... 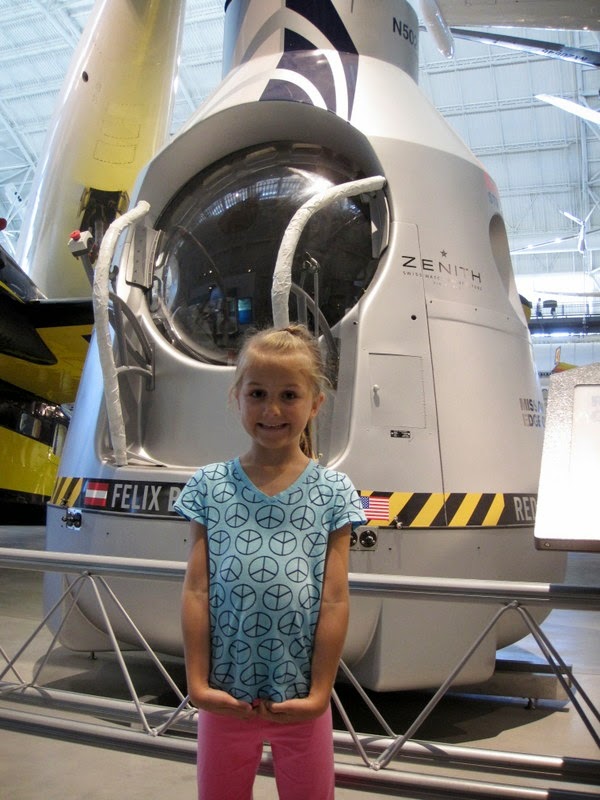 There was, of course, a huge swath of WWII era planes. 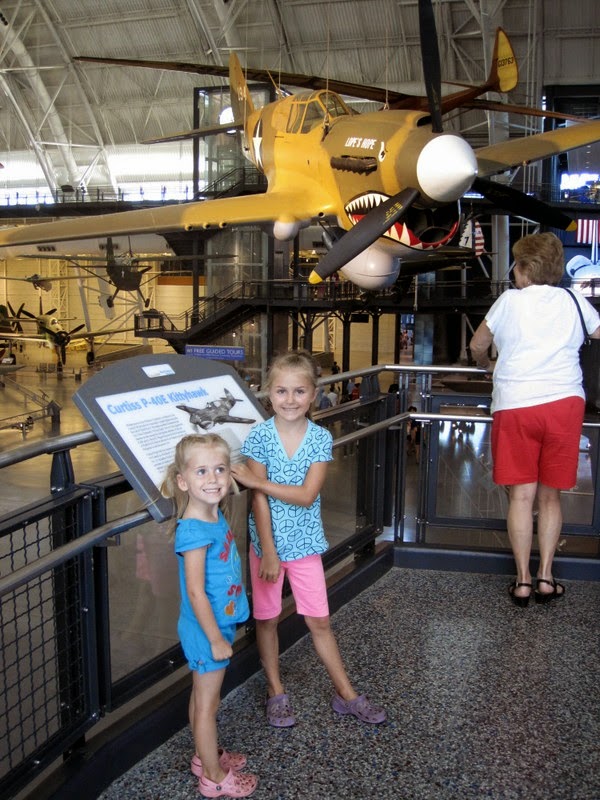 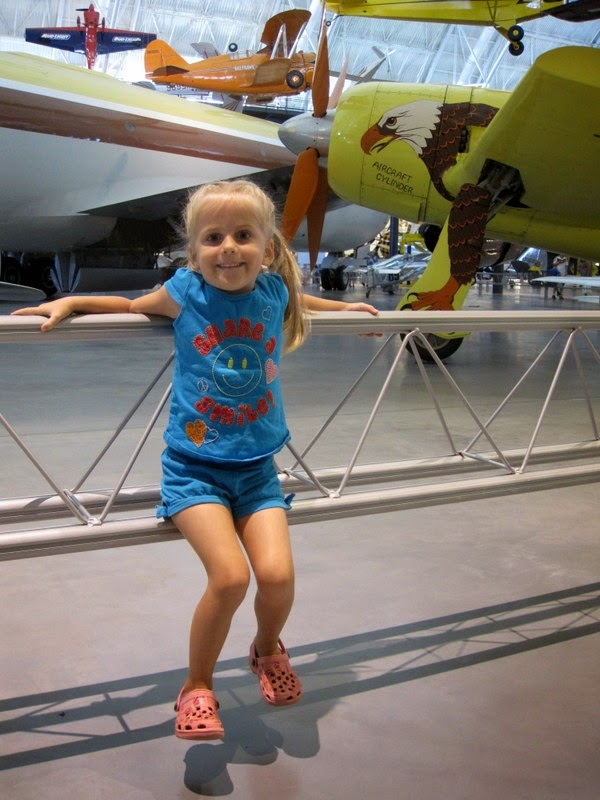 We saw some kamikaze planes—that are more like torpedoes with a person inside than an actual plane (just so there's no question about what your mission is, I suppose)... 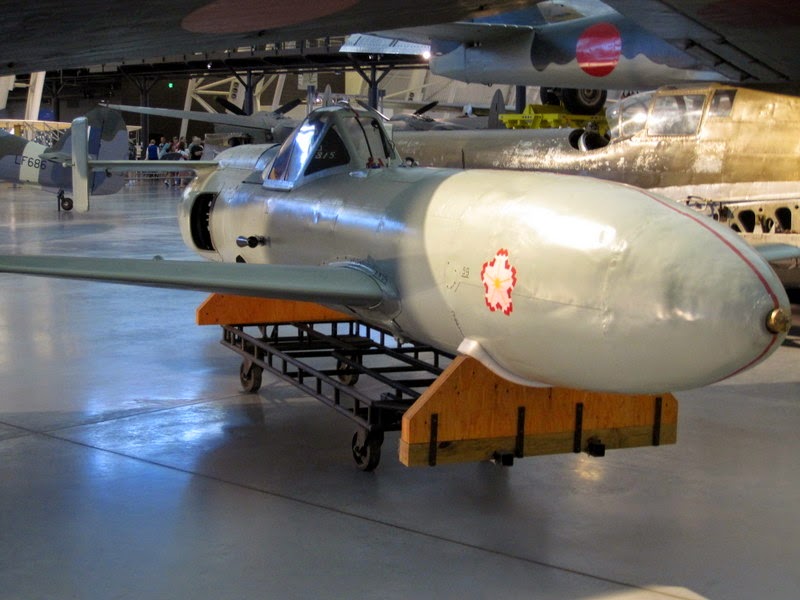 And some planes from Germany as well... 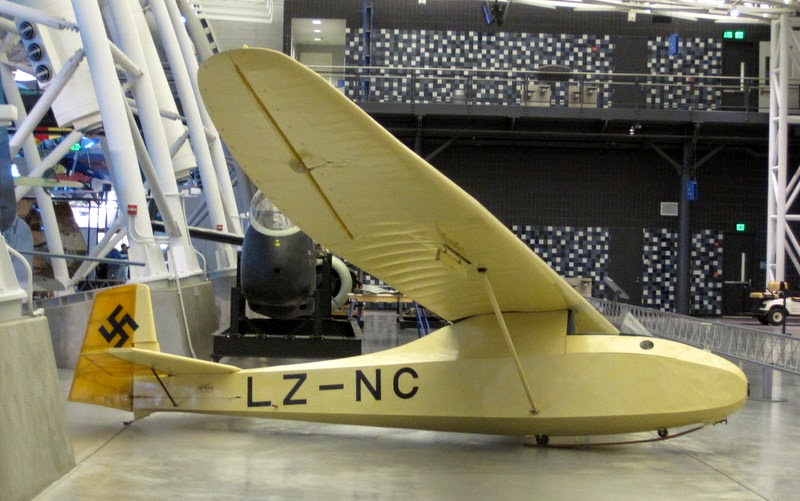 Wanting to test Rachel's knowledge of symbols, Andrew pointed out this German plane and said, "Rachel—do you see the symbol on the tail of that plane?"

"I do not see," she said impishly.

"Sure you do," he said. "The yellow plane right in front of us. See the black symbol on the tail of it? What is that a symbol of?"

This girl is so full of puns it's scary. And hilarious. And annoying. And awesome. All at the same time. 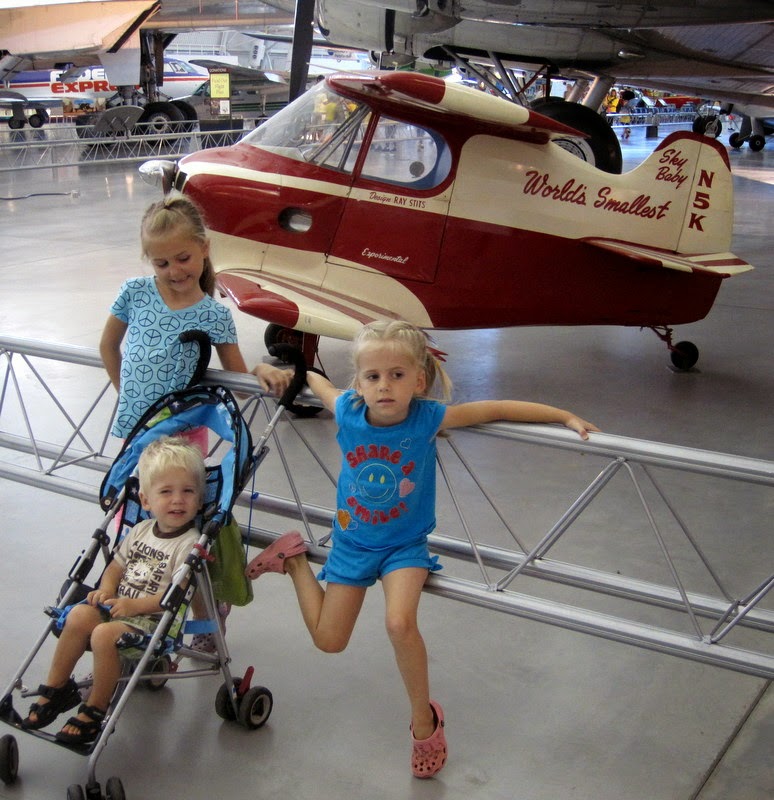 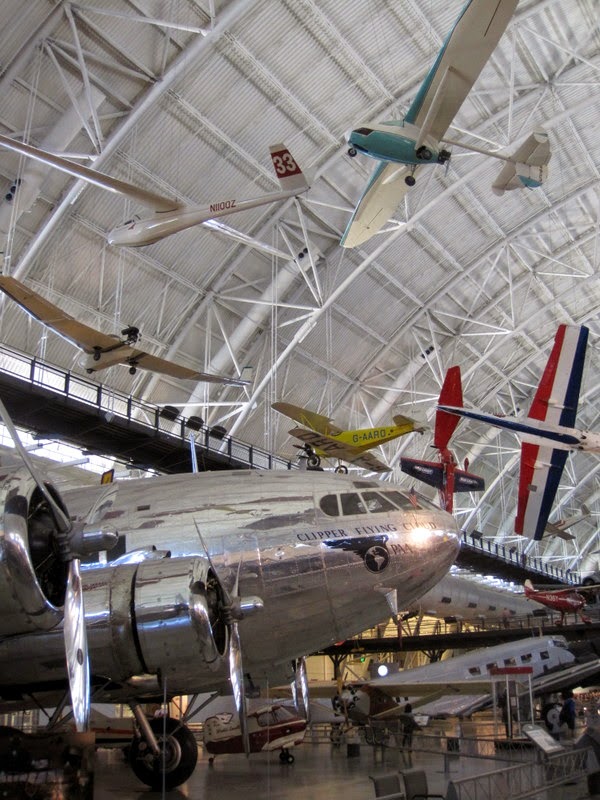 When we'd had our fill of planes we moved on to the McDonnell Space Hangar, where they keep all sorts of outer-spacey things. 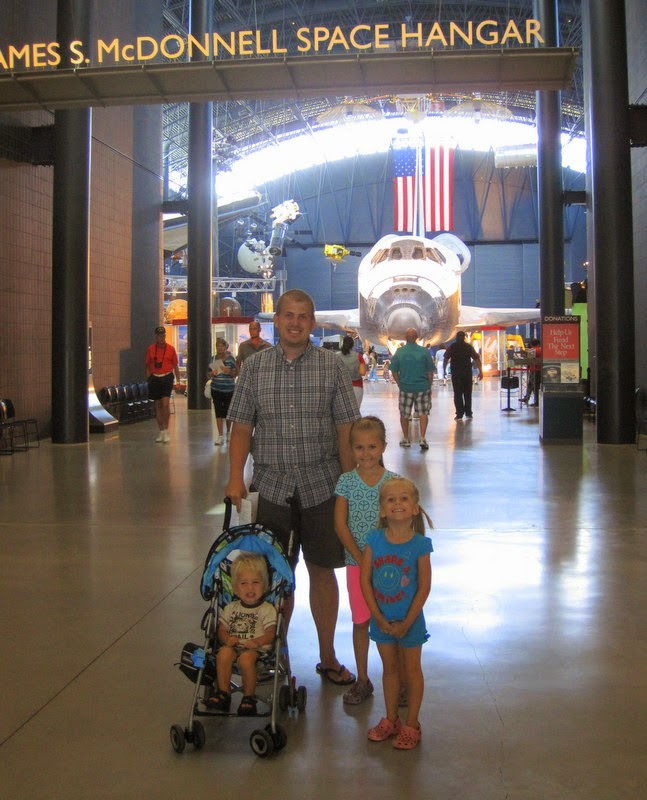 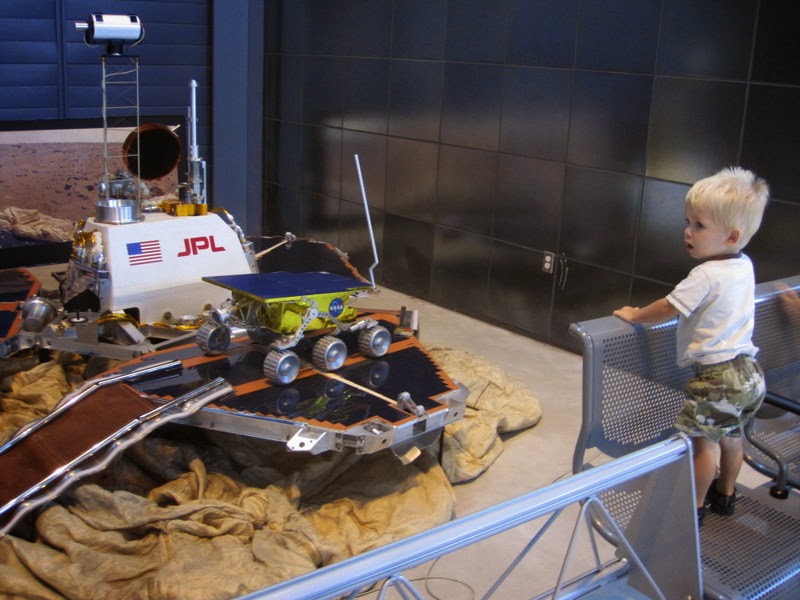 We were all awed by the enormity of the space shuttle Discovery: 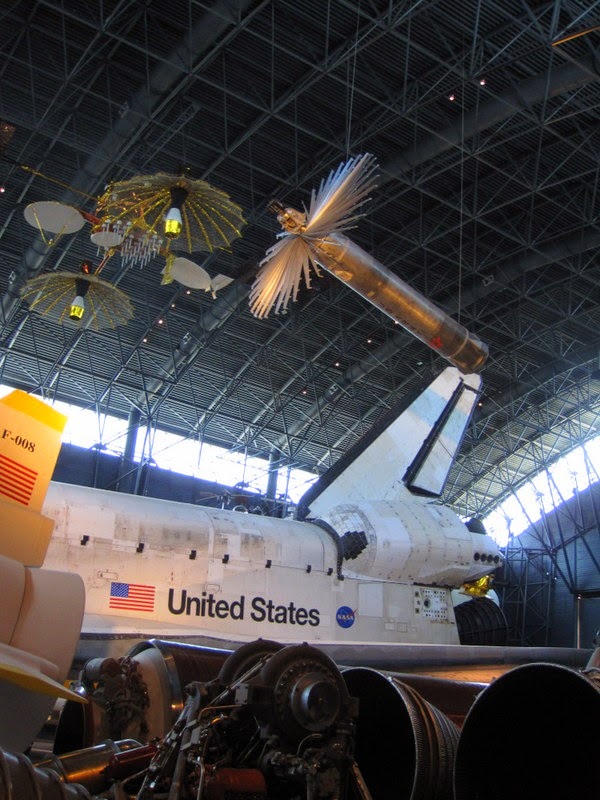 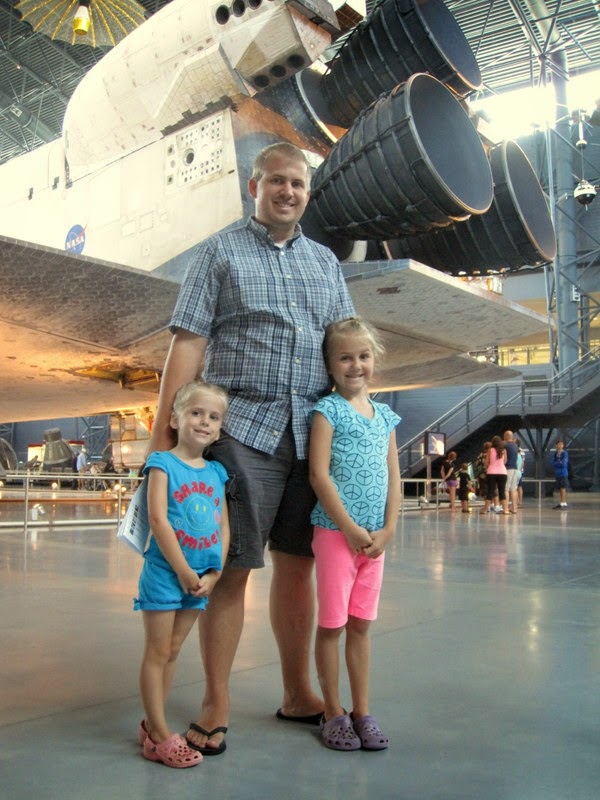 I'm not sure how I feel about their emergency exit—"cut here for emergency rescue." There are many reasons I am not an astronaut. This is just one of them. 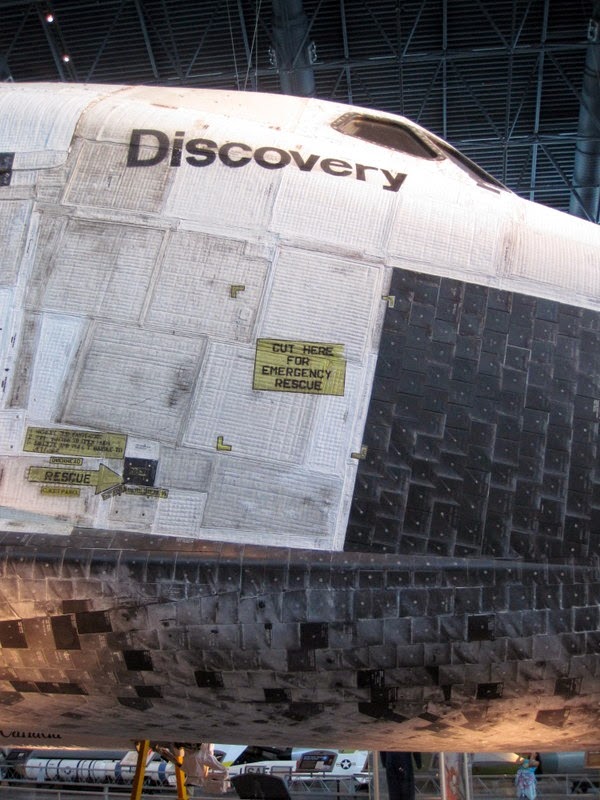 We enjoyed looking at all the things an astronaut might take into space with them—from velcro darts to magnetic scrabble... 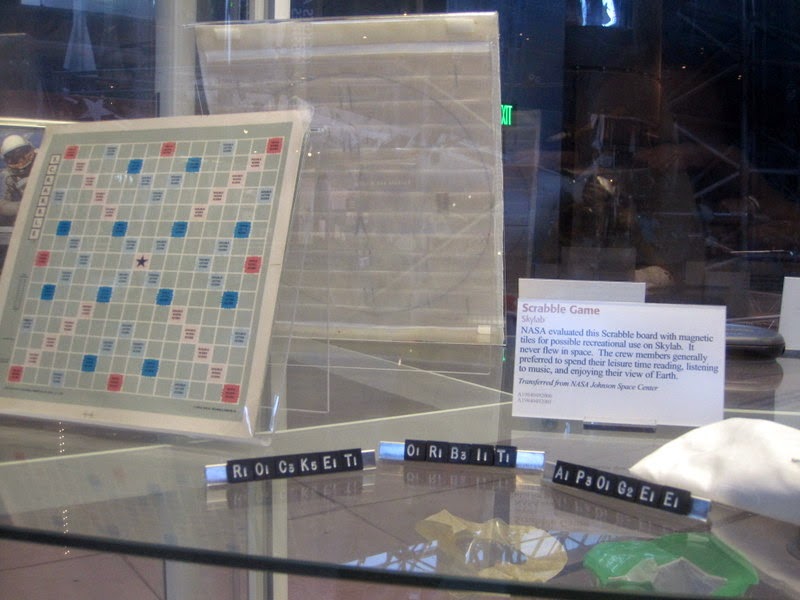 ...from tiny bite-sized loaves of bread (to eliminate crumbs, I think) to tubes of borscht (the girls were quite impressed when I told them what was in these tubes before Daddy could read the sign; they often forget that I can read Russian): 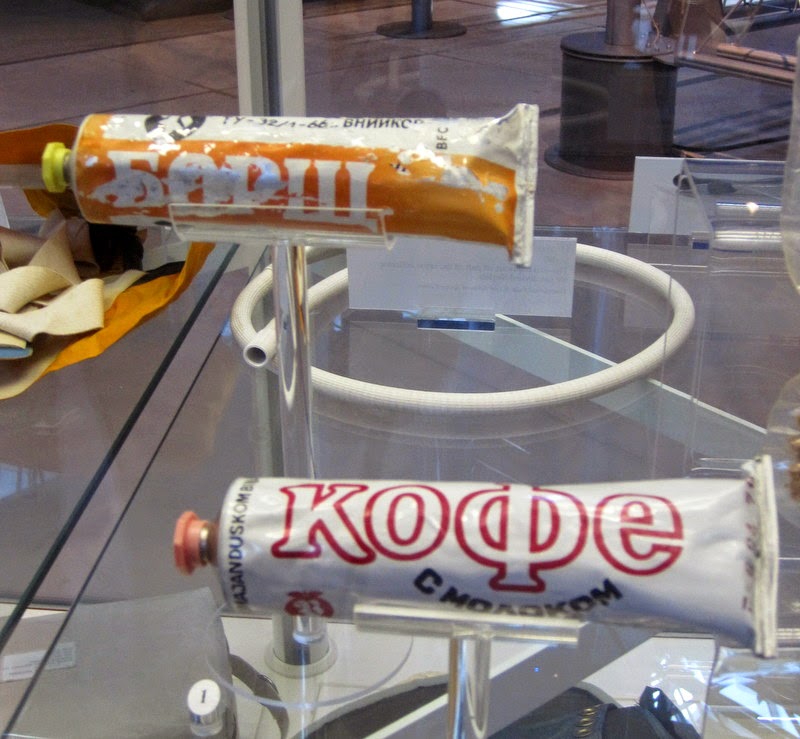 By this point in our little self-guided tour, Benjamin had grown weary of sitting in his stroller so he hopped out and gave Miriam a wild ride through the museum. 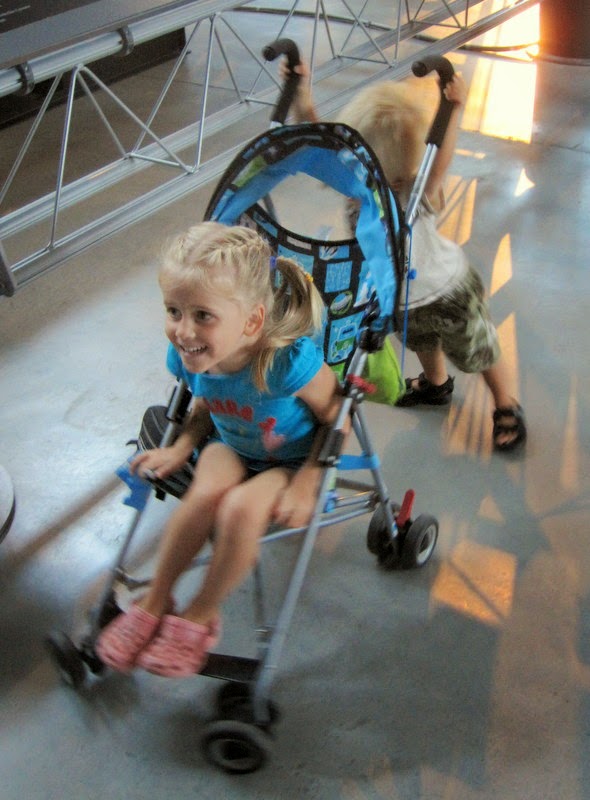 Everyone loved this mailbox: 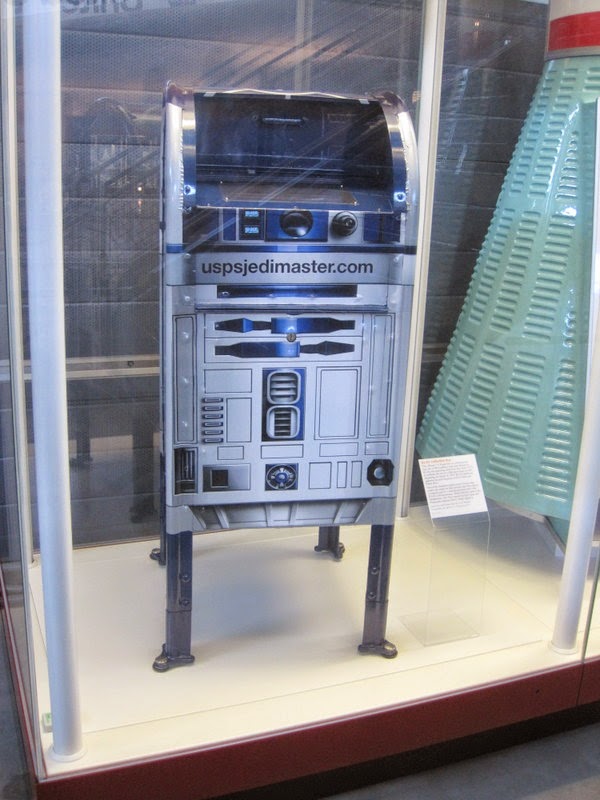 There were some chairs lined up along a wall with a big "KEEP OFF" sign behind them. The girls were, at first, quite anxious about sitting in them. I had to show them that every wall had a keep off sign whether or not there were chairs by the wall—so clearly the sign referred to the wall, not the chairs. Still, they felt a little roguish sitting on them. 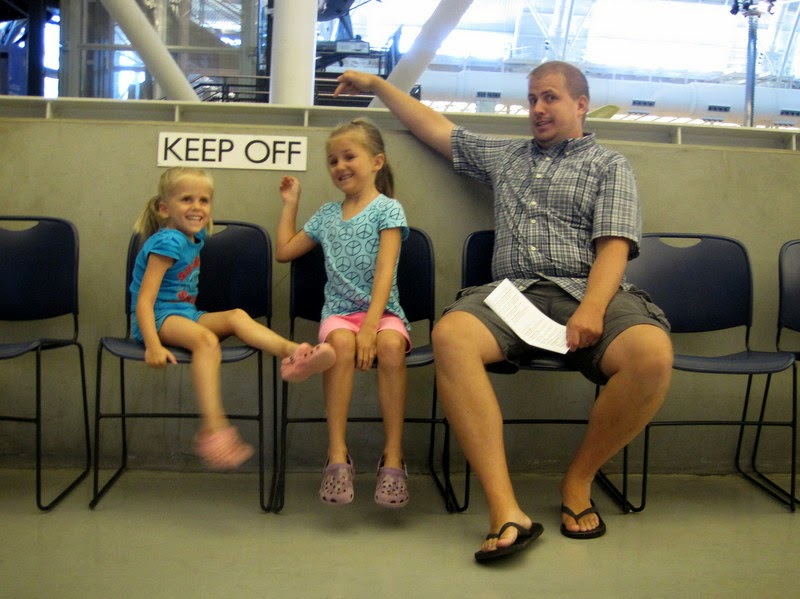 After a quick lunch at the McDonald's inside the museum we were off again! 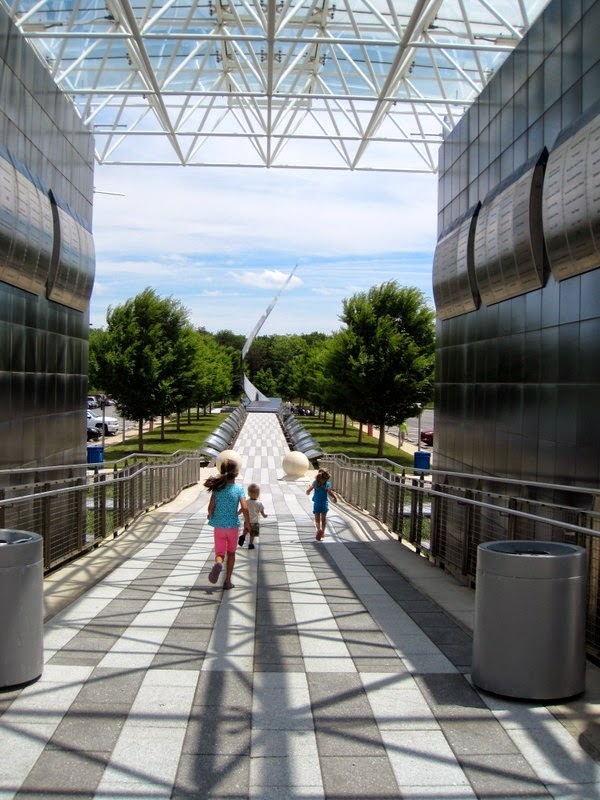 It was nice to only have a shorter drive in front of us (at least a wee bit shorter than if we'd stopped in Pennsylvania as originally planned). We were happy to be home at last. And I think we're only now finally unpacked and recovered!
Posted by Nancy at 10:21 PM