Miriam has been growing like a weed this summer! In May when we first pulled out the swim stuff we tried on all sorts of bathing suits to see what fit who. Rachel had outgrown hers from last summer but Miriam's still fit. Soon she stopped wearing that one in favour of others. "It's getting too small," she explained.

This afternoon she was tugging and tugging at a bathing suit, trying to squash herself inside it.

"Why don't you try this one on?" I asked, digging out the swimsuit Grandma had sent for Rachel last summer (but which was too small for Rachel then).

Miriam had tried it on in May and it hadn't fit her then so she wasn't too sure about trying it on now. I convinced her to though and she found, much to her delight, that it fit quite well. She was excited to wear it to the pool this afternoon.

Here she is showing it off (with Benjamin because he saw me pull the camera out): 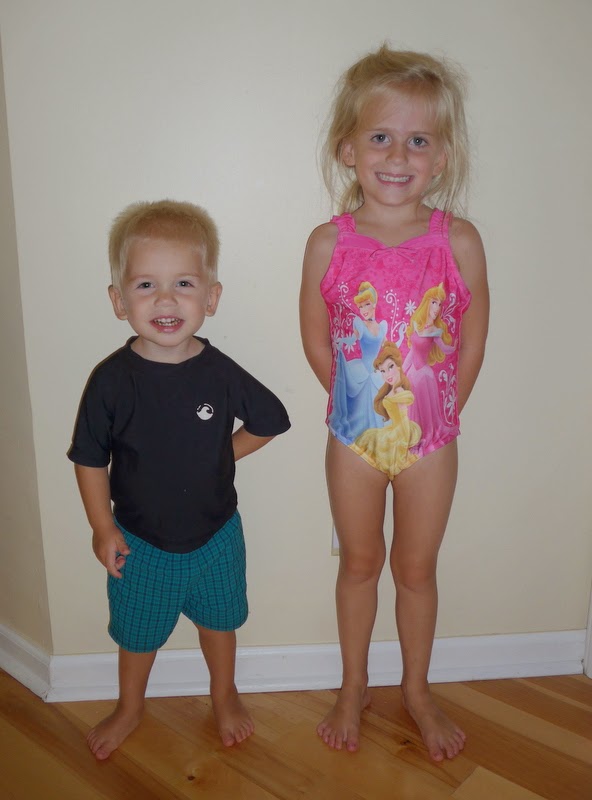 And here's a second picture because...Benjamin's face (he loves the camera): 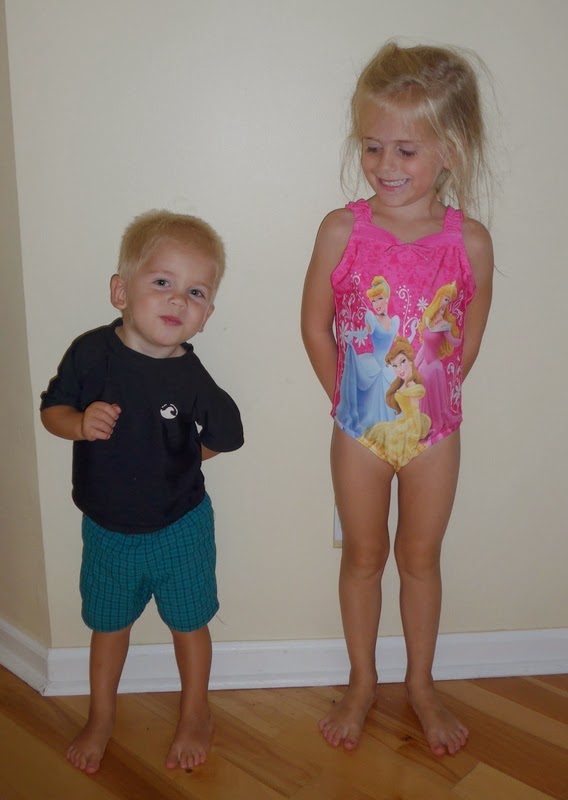 I think he's hiding a granola bar behind his back. But even though he's constantly eating he's still wearing the same swim suit(s) from last year. I'm pretty sure he burns off every calorie he eats running around in pointless circles because this boy is constantly running around in pointless circles. Circles around the couch. Circles around the kitchen table. Circles around me. He's always running laps, unless he's not, but then he's probably zooming or jumping or swinging on or off something.

Anyway, swimming lessons went well today. We met up with both families and no one broke any limbs or pooped in the pool or anything. Amazing, right?

We had a lot of fun playing games today while learning how to swim. What Time Is It, Mr. Shark? was a hit. Even Rachel joined in for that one (she normally eschews our lessons because they're too babyish)!

One person is the shark (Rachel was it first) and they stand away from everyone else, who stand at the starting line and ask, "What time is it, Mr. Shark?" The shark will then pick a time (our lowest time was three o'clock, our highest number was twenty o'clock (because apparently we were playing on 24-time)) and the little fish walk forward practicing their front-crawl arms (three steps/arms for three o'clock, twenty steps/arms for twenty o'clock). Eventually the shark will declare that it's "Lunch time!" and then the little fishes turn around and swim as fast as they can back to the starting line before the shark tags them. Whoever gets tagged is the new shark.

They got quite a bit of practice in this way (without feeling bored).

We also played "Chop, Chop, Timber!" in the deep end to practice our pencil jumps. Rachel stuck around for that game, too. After I'd chopped everyone down once Rachel asked, "Can I have a turn being Paul Bunyan?" which was pretty funny because I hadn't mentioned Paul Bunyan at all when explaining the rules of the game (which are basically, stand on the deck with your toes hanging over while I tap your ankles with my hand-axe and say, "Chop! Chop! TIMBER!" and then jump into the pool and swim to the side).

I was fairly diligent at remembering to give Rachel formal lessons at the beginning of the summer when I was also teaching her friend Callin, but since I've spent the rest of the summer teaching younger kids I've kind of neglected her at the pool. She goes off and plays with neighbours and is happy to not be with the "babies." Other than a few drills I've given her to do, she's mostly been left to practice on her own.

Today I made her take a lesson when I'd finished with the younger kids. I watched her strokes and noticed that she's made a lot of improvement just practicing on her own. She can tread water for quite a while now. When I tried teaching her how at the beginning of the summer she could hardly stay up. I've seen her practicing (and teaching her friends how to do it) though and it sure has paid off! She can swim multiple laps without stopping, she can roll to the side for breaths when she swims front crawl.

And she should be seeing progress like that, I suppose, since we've spent close to a billion hours at the pool this summer.
Posted by Nancy at 12:39 AM