Adventures in potty training (and swimming and arm breaking)

I think I'm going to call it: Benjamin is officially potty trained.

Lest I be accused of gloating, I think now's as good at time as any to mention that although he's officially potty trained he also peed on me during scripture study tonight.

Benjamin has been (mostly) accident-free for several days in a row. Maybe even weeks. We can even send him to nursery in underwear and he does just fine (though when Andrew picked him up on Sunday he had clearly been waiting to go for far too long and started crying, "Potty! Potty! Potty!" the minute he saw Daddy). We're working on staying dry through the night, though I'm not sure that's going terribly well.

I wake him up to go potty every night before we go to bed and about 50% of the time he'll have already wet the bed.

But, on the whole, I'd say he's potty trained and I'm quite happy about that because changing diapers is not my favourite thing to do.

All my cloth diapers have been packed away in a box, along with my nursing covers and baby carriers. While I'm happy to retire them for a season, deep down inside (and rather close to the surface as well) I'm hoping to pull them out again sooner rather than later.

It might have helped that he didn't take a nap today because it was an early release day and Rachel came home from school around the same time Benjamin usually goes down for his afternoon nap. And then, of course, everyone wanted to go to the pool.

Saying no to the pool is very hard to do when it's as gloriously sunny outside as it was today (the clouds decided to give us a break). Rachel's in school all day long while everyone else is still on summer break so when she has an afternoon free I can't really say no. I just can't. So off to the pool we went, nap time be...forgotten.

We stayed at the pool for three hours. A fun time was had by all. 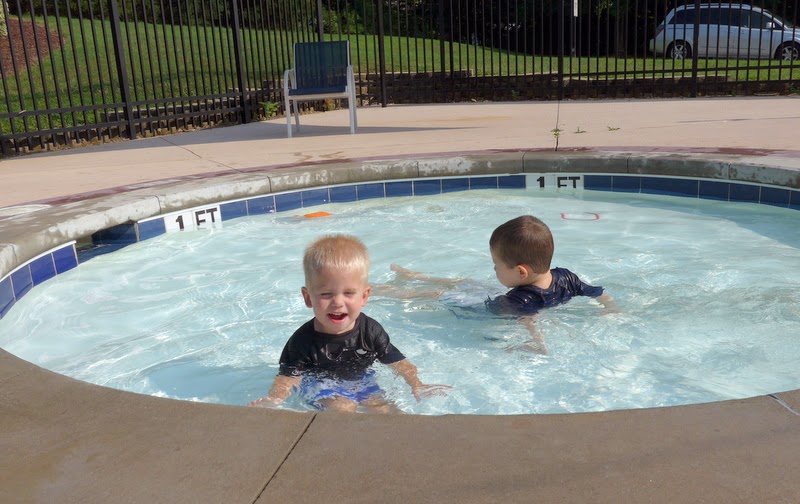 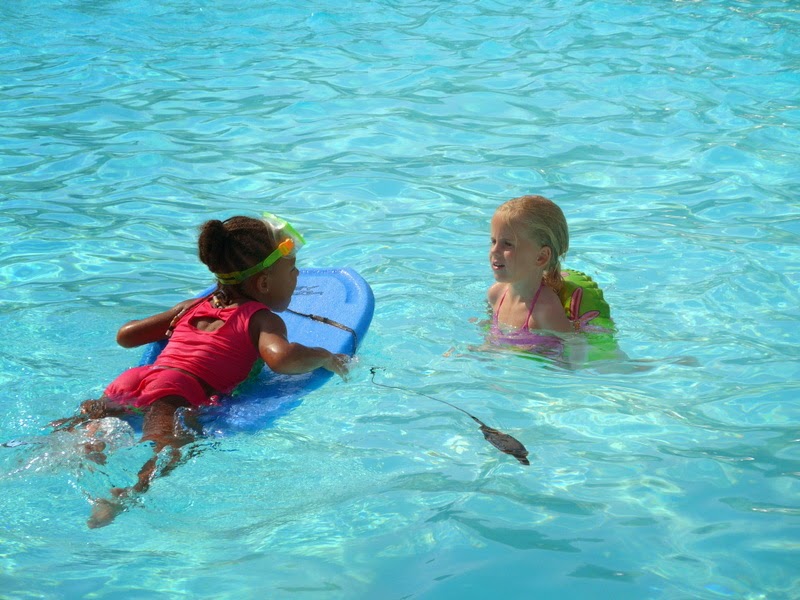 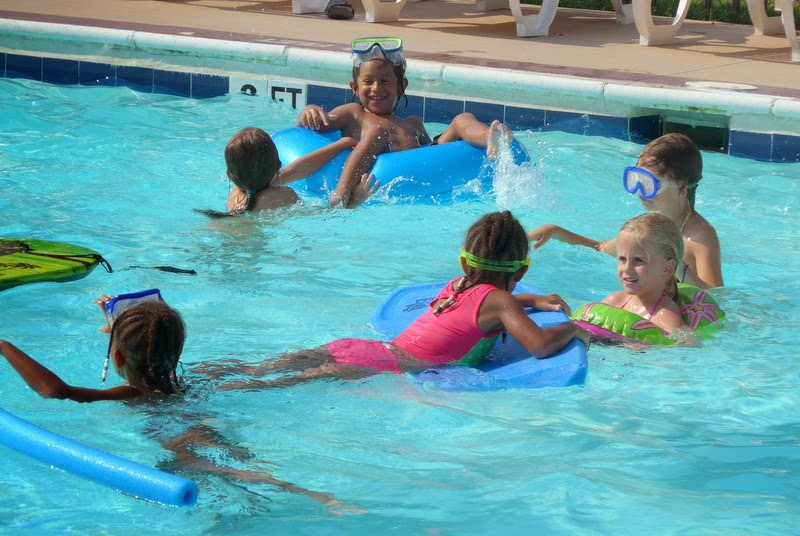 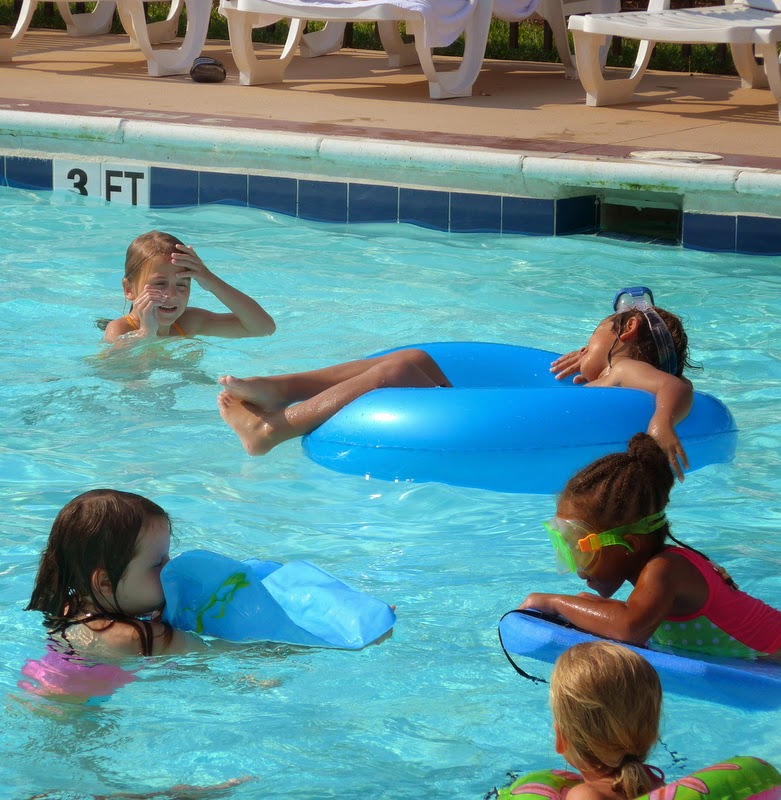 After swimming we drip-dried at the park, where I felt a little guilty because yesterday my friend's little boy fell off the bridge on the play structure and broke his wee baby arm. I felt so bad!

I was in the pool with her older son and my girls and she was at the playground with her younger boys and Benjamin. One of Benjamin's favourite things to do is to run across the bridge, which is terrifying. For me. He thinks it's hilarious.

I'm much less nervous about that bridge this year because Benjamin's a lot sturdier on his feet, but last year I would hover around that bridge as he went back and forth, back and forth, teetering, tottering his way along. There were many time he nearly fell off it, but I was always able to catch him.

My friend's little boy is about a year younger than Benjamin and is at that same scary stage on the bridge where he thinks he's big enough to do it on his own but is so wibbly-wobbly that, as a mother, it makes your skin crawl but that, as a mother, you can't tell if your paranoia is justified or not.

Needless to say, that sweet boy fell headfirst off the bridge and wouldn't stop crying for the world.

Meanwhile, back at the pool, I had no idea anything was going on so we just kept splashing around, blissfully ignorant of that poor baby's hurt arm.

I don't know how long that patient momma waited for us to get out of the pool, but she was quite calm and collected, answering my inquiries with, "Well, he keeps trying to get down and play but then starts crying again and he hasn't used his arm since he fell. I think it might be broken..."

And it was. Poor thing.

Anyway, that was yesterday. Today's outing went by quite smoothly (though—side story!—Rachel told us at dinner that she got to watch her friend Elijah break his arm at school today (he fell off the monkey bars) so apparently it's a trend) and by the end of our three hours we were quite ready to come home for dinner.

Benjamin was inexplicably grumpy and mind-bogglingly incontinent. He had an accident on the way home from the pool, had another one during dinner, one while we were cleaning up after dinner, and then another one during scripture study. That was my favourite accident because I was lying on my stomach and he was sitting on my back and then suddenly my back was a little less dry than it had been (and I was a trifle less happy than I had been) moments earlier.

As I was helping him out of his soiled clothes for the fourth time that evening it suddenly dawned on me that the reason he'd lost all ability to be potty trained was because he was completely wiped out.

If he had only skipped his nap, or even if he had napped before we went to the pool, he might have handled things better. But he skipped his nap and had played at the pool for three hours. That boy was plum exhausted!

The downside, obviously, is that I now have a pile of gross laundry that needs to be dealt with.

The upside is that I only had to put Benjamin to bed three times before he fell asleep. He hardly fussed at all!
Posted by Nancy at 9:42 PM