Back in high school I took a US history class and in that class was the grandson of Gail Halvorsen, aka Uncle Wiggly Wings, the candy bomber. Can I remember the name of the boy in my class? Nope.  I only remember that he's the candy bomber's grandson. He lives in Orem now and he's coming up on his 95th birthday so to celebrate the Fourth of July this year the city coordinated a commemorative flight over Orem and he dropped 1000 chocolate bars to a lucky few.

We went down to Orem to watch, but before we did we stopped by Naanii and Bumpa's house so that everyone else could see the kids.

Benjamin was quite excited to go to their house. 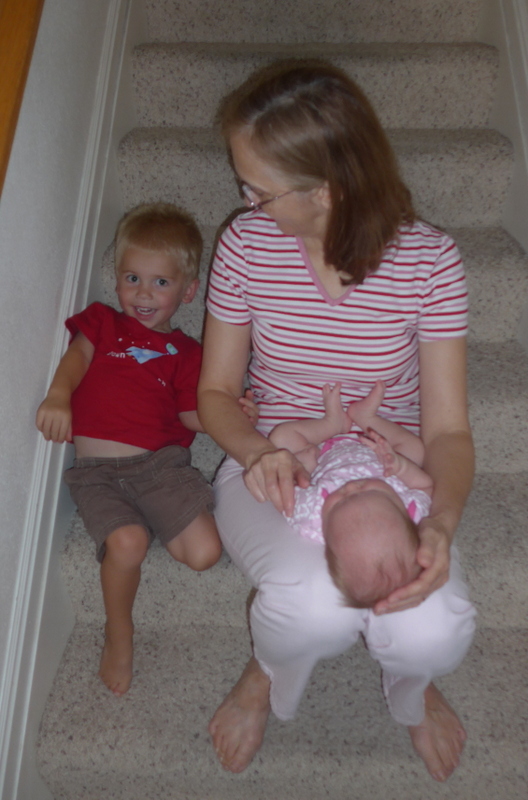 When he first got to Grandma and Grandpa's house he immediately went downstairs to pull out the toys. He'd been looking forward to playing in Grandma's basement for months! By the time I caught up with him downstairs the place was a disaster.

"Are you playing with cars and trains at the same time?" I asked.

When he got to Naanii and Bumpa's house he asked to play with the cars, so we brought the cars out for him. He asked for the road, so we dug out the little car carpet for him.

He shook his head and said, "Not that one. I want the rollercoaster road!"

Quite in awe of his memory we dug out the race track. He hasn't played with that since Christmastime—back when he was still in diapers (and slightly terrified of Auntie Josie). This racetrack is old (like decades old) and I love that it's pink. It came from an era when girl toys and boy toys crossed lines a little more fluidly. 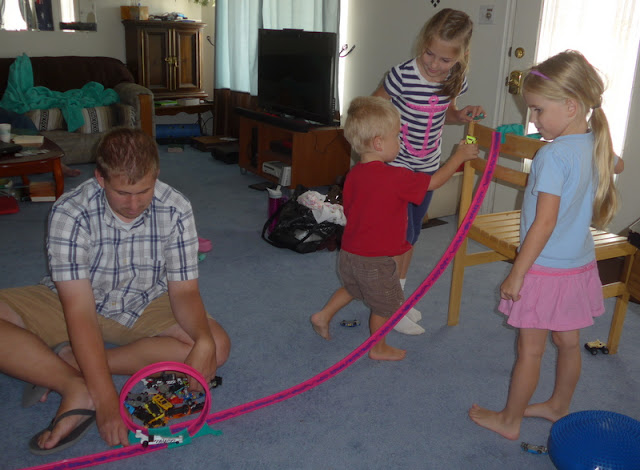 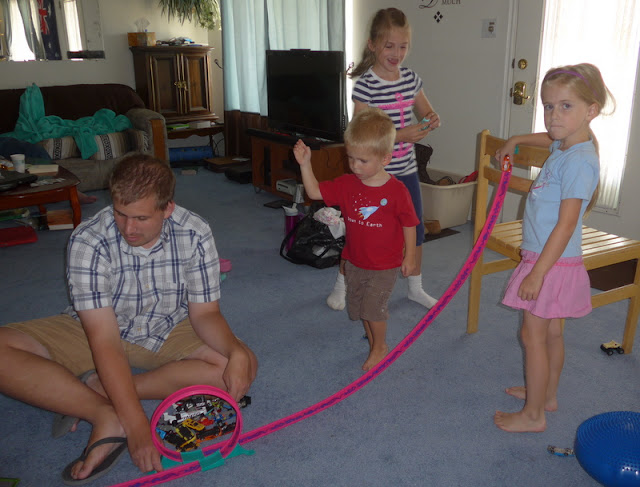 Auntie Josie brought out her Instax camera (a polaroid) and snapped a picture with the girls. This is the one that I took with my camera: 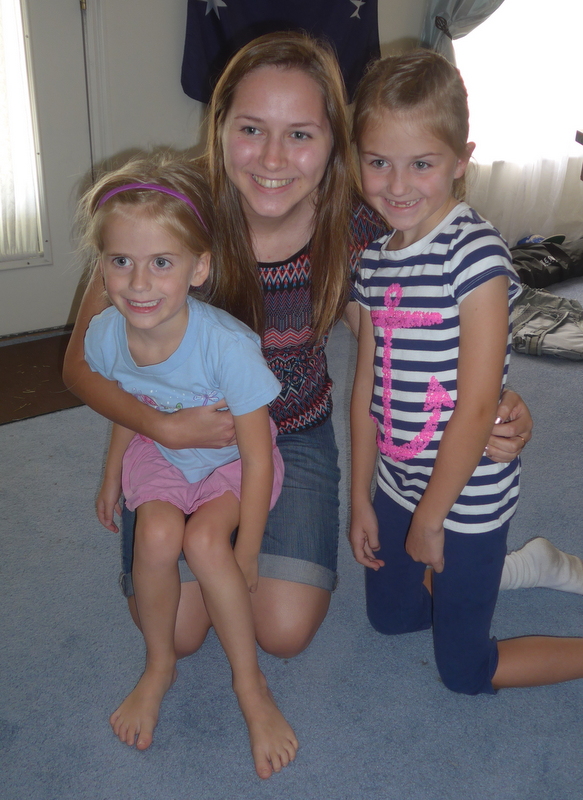 Here's Josie being cute with her camera: 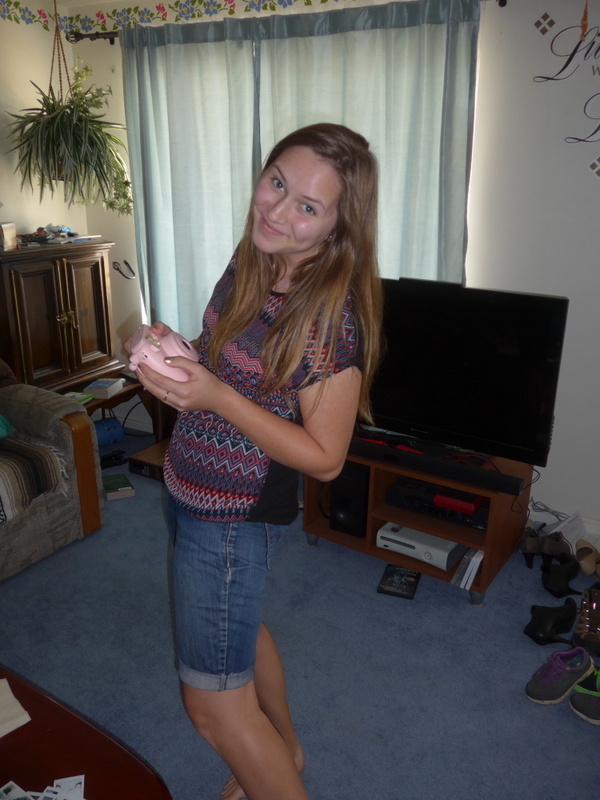 And here are the girls and Daddy watching the picture develop: 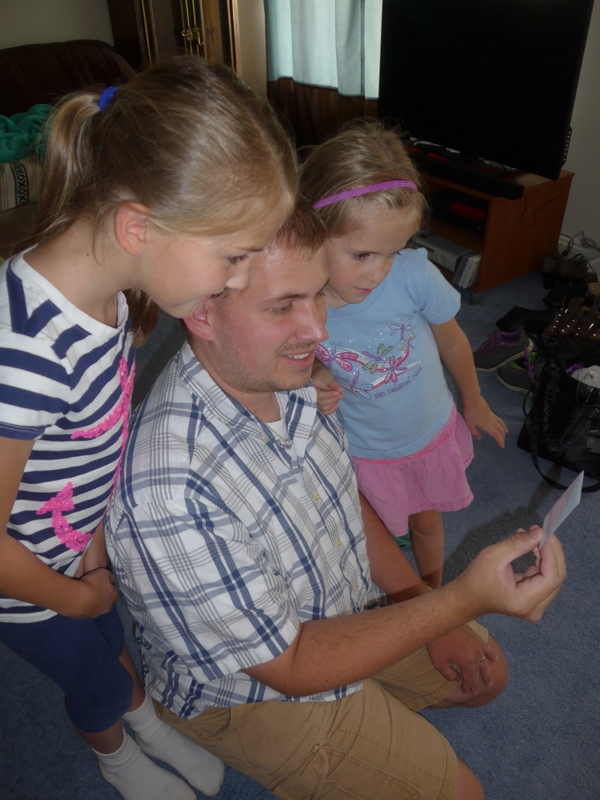 And here's the stack of pictures on the coffee table: 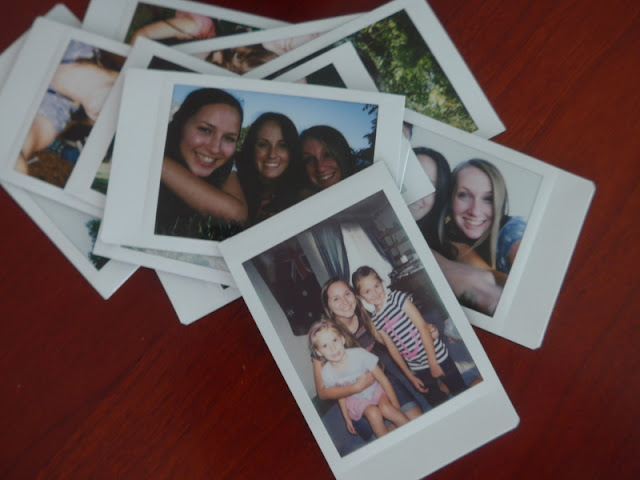 The girls thought it was amazing when we told them that that picture was the only one like it in the world—it wasn't on a computer anywhere in the world and there was no way to print another copy or anything.

Zoë was passed around a bit. Here she is with Bumpa and Uncle David: 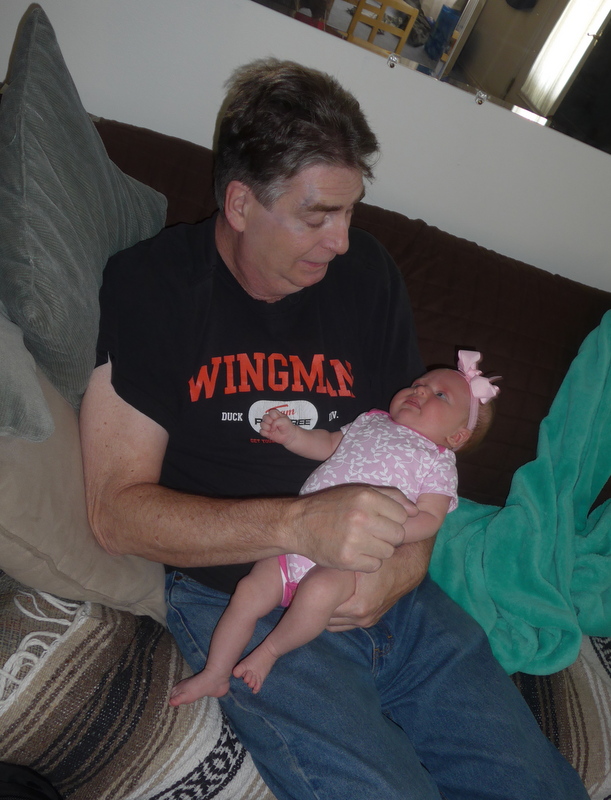 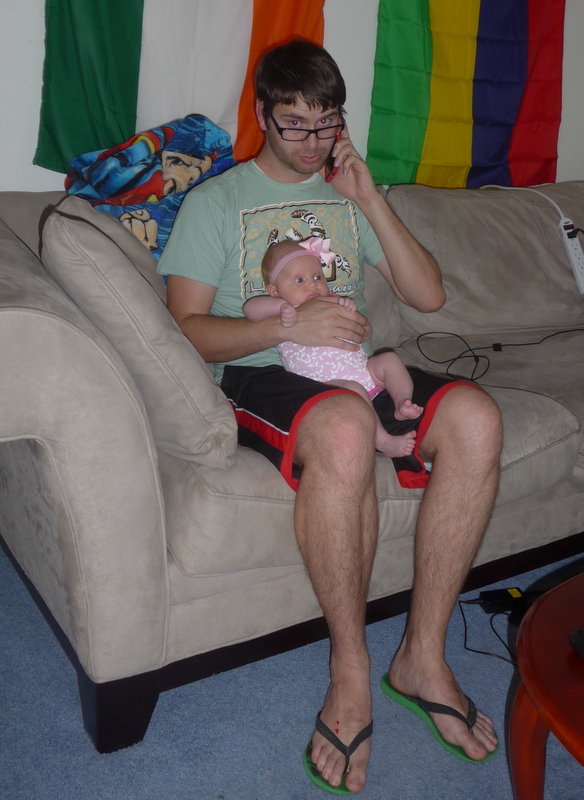 "Of course you can!" Naanii said and Benjamin cheered.

We drove to Scera park, where Andrew let us out by the elementary school and we wandered around until we found Grandma and Grandpa (truthfully, it was until Grandpa found us) while Andrew found a place to park (way over by the high school). Grandma was saving a nice shady spot for us.

I gave Rachel the camera to play with while we waited and she immediately set about taking pictures of everyone. 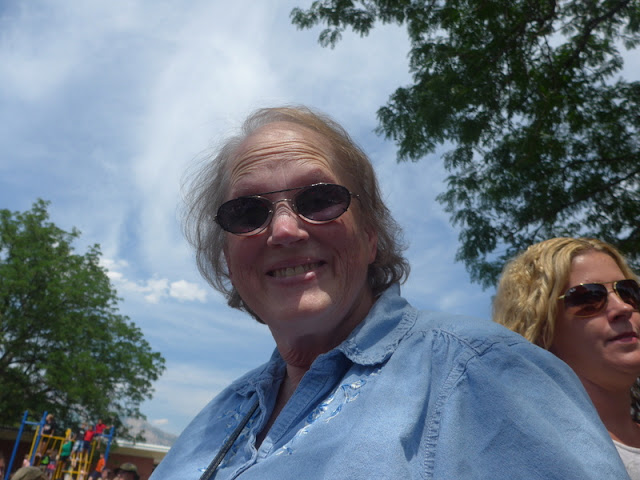 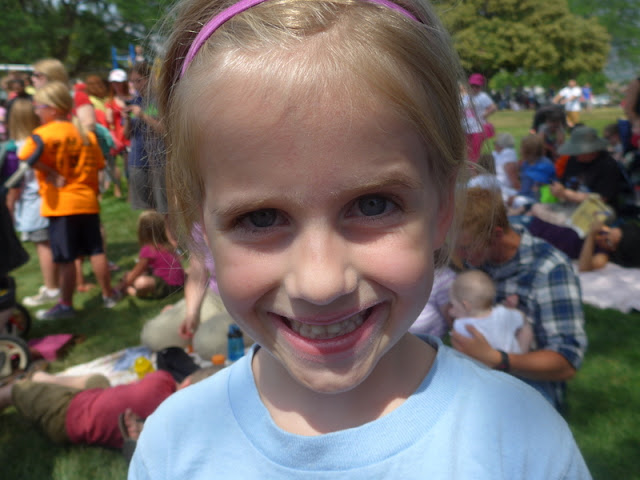 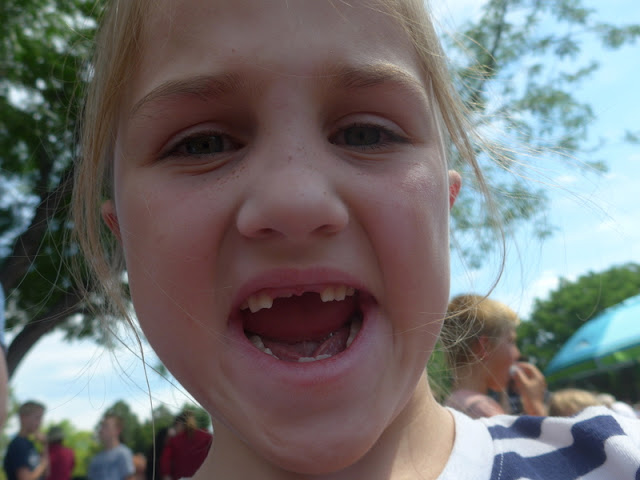 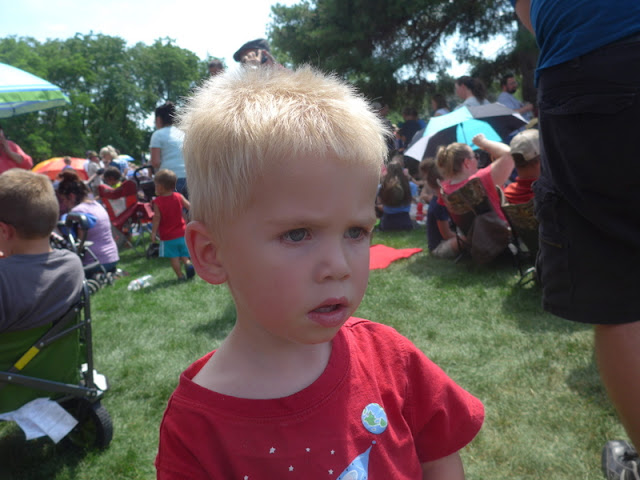 My picture is a little goofy because I was reading aloud from wikipedia to the children while we waited and she caught me in the middle of a word. 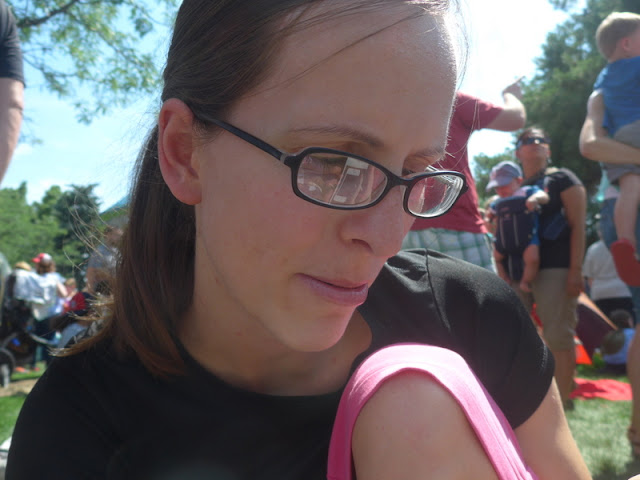 It was a long, hot, crowded wait. The temperature soared to 107°F (according to Grandma's car) or 104°F (according to the sign at the high school). Either way it was above 100°F and we, along with thousands of other families, were standing around in the sun like a bunch of crazy people. 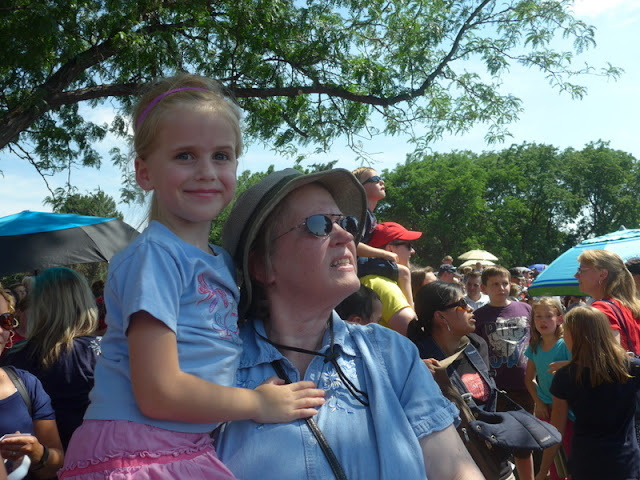 When the planes started flying we lifted the kids up so they could see over the sea of adults. 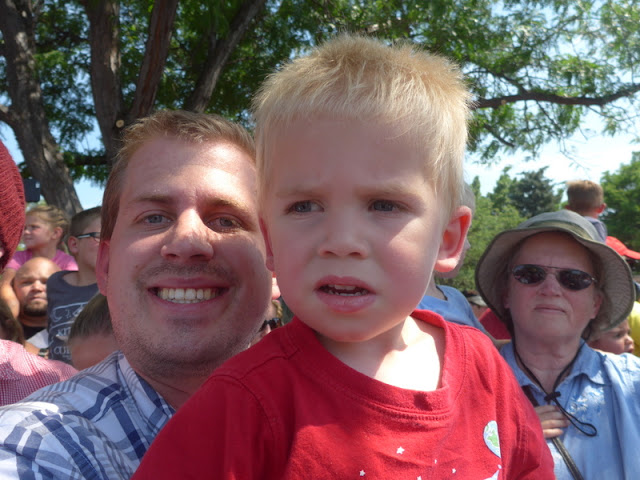 Grandpa had spent most of the wait standing in the shade with the baby. 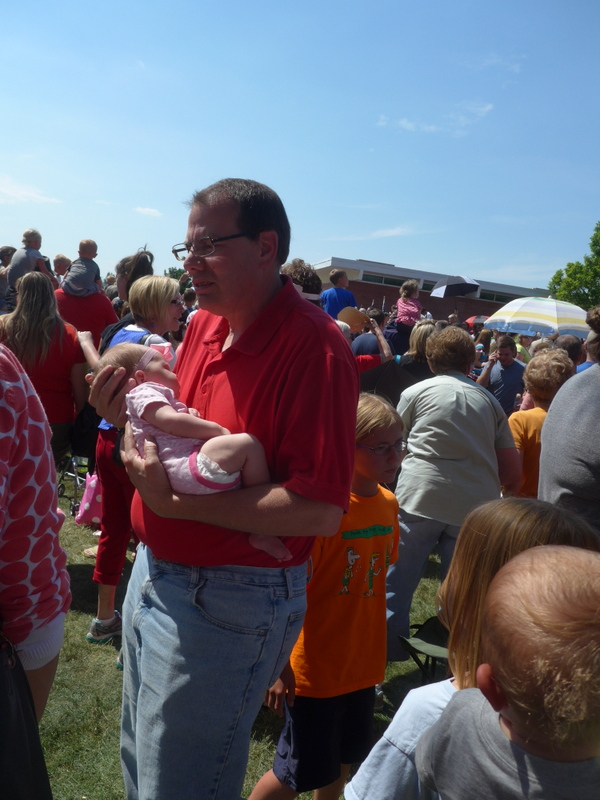 Here's everyone watching the planes zooming around: 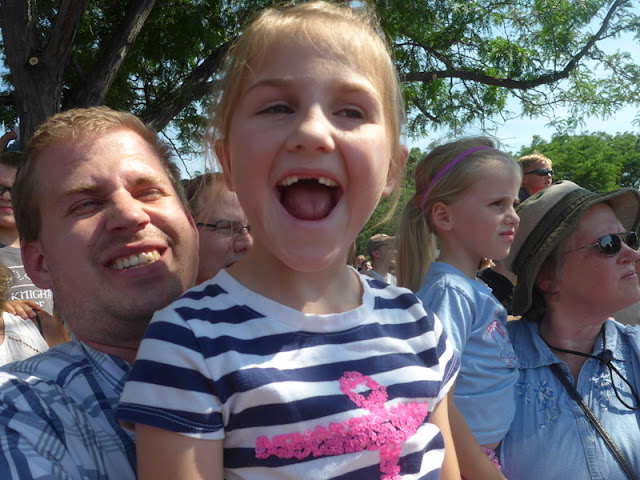 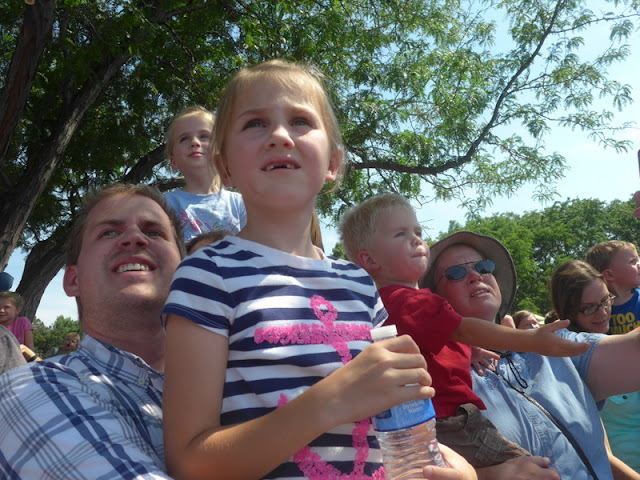 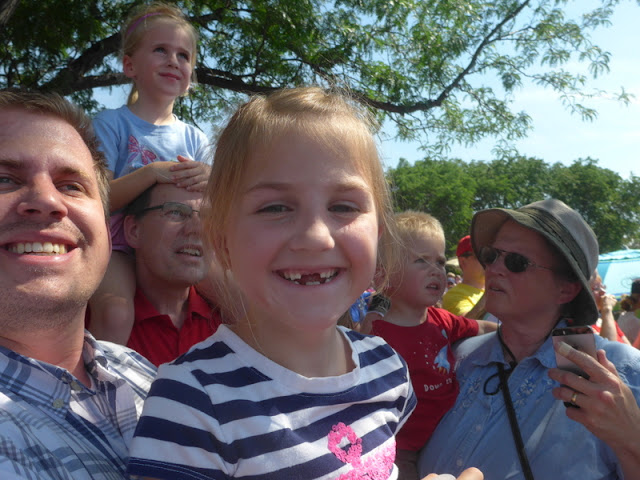 And there's The Candy Bomber, himself: 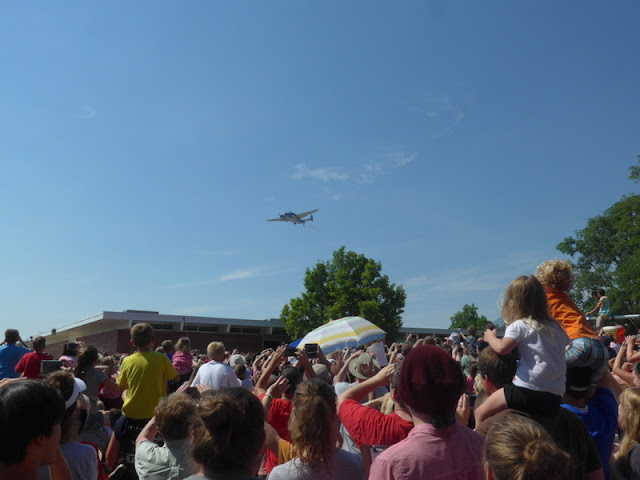 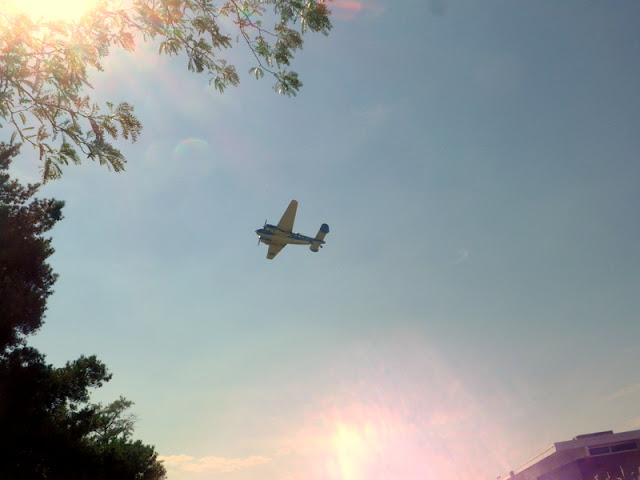 Benjamin loved watching all the parachutes with candy fall to the ground. "That's plane's dropping candy!" he kept giggling. He giggles behind his hand and it's adorable (and I just happened to catch Andrew mimicking him). 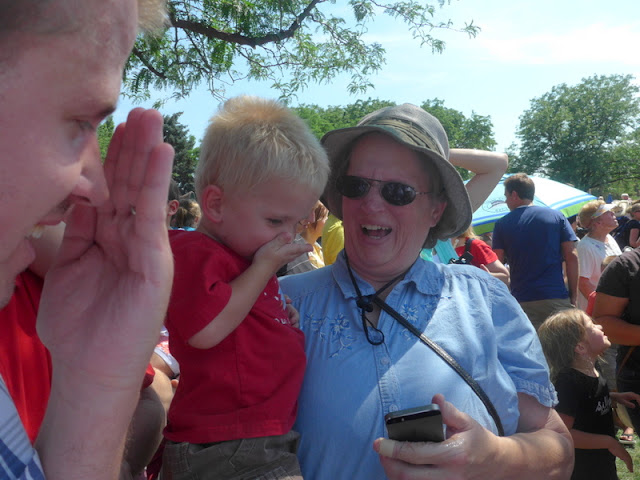 At one point poor Grandpa was holding both Miriam and Benjamin: 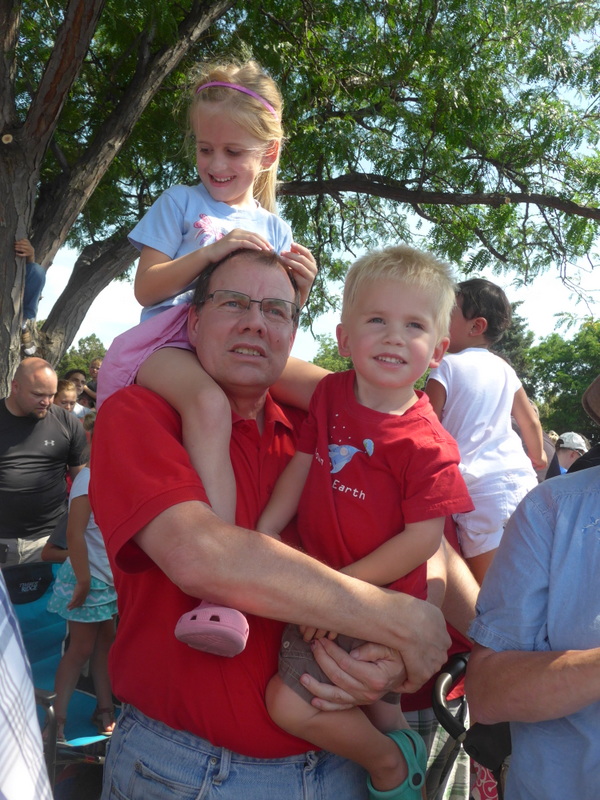 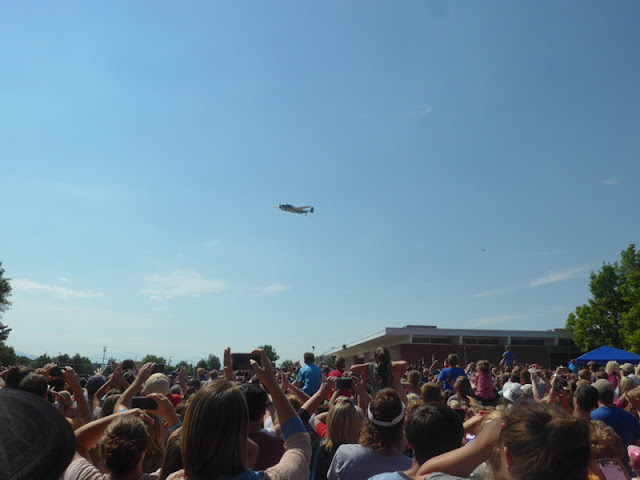 After the plane had disappeared from view we made the long trek to the van (and I ran into Megan Nordstrom and we stared at each other until I said, "You're Megan!" "And you're Myrnaaaaaaaa's daughter!" Megan said triumphantly, "It's ridiculously hot!" And that was about the end of our exchange because it was ridiculously hot) and then we sat in its air conditioned glory while I nursed the baby and everyone else drained their water bottles and enjoyed the salt water taffy Bumpa Bruce had sneaked into the diaper bag. We were all so hot and thirsty!

And now Benjamin believes that airplanes occasionally drop little packages of candy outfitted with parachutes. We saw a plane later in the day and he said, "That plane's going to drop candy!"

"Some do," Benjamin insisted.

"Only the one we saw today," Andrew said.

Benjamin's so funny with his "some" response. It's like he knows he's right but he doesn't really want to argue with you about it. We went out to dinner at Culver's last night (so we could have ice cream with our dinner because we were still hot by the time we got home). We passed by a fire truck and Benjamin, who's quite sure that firefighters burn down buildings and carry fire in their fire trucks said as much.

"They don't carry fire! They carry water," Andrew explained to him. "They put fires out."

He's a silly, silly boy (and was embarrassingly loud and messy in the restaurant).

We were still hot after dinner so Grandpa took the big kids to the splash pad while Grandma and Daddy went grocery shopping and I had a nap with Zoë. When they got home I heard Grandpa say, "Be quiet because I think your mom is napping." Then his tone switched to sarcastic mode and he said, "She's always napping."

"Hey!" Rachel said defensively. "She just had a baby, mister!"

That's my girl! I drifted back to sleep knowing she'd defend me against anything Grandpa could throw at her.

When Grandma came home she brought out the bubble machine; I slept completely through that part of the day but Daddy took a picture of it (the girls are already in their pajamas). From the looks of things they really enjoyed it. 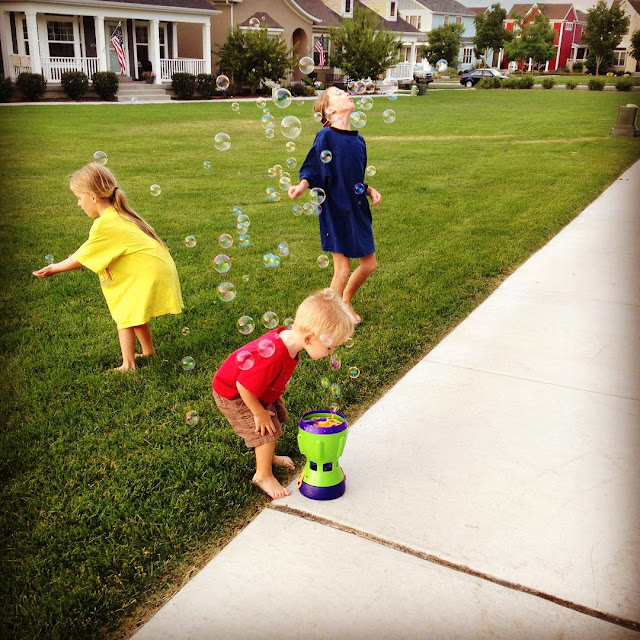 It was a pretty full (and hot) day; no wonder we didn't feel like doing anything other than sitting around today.
Posted by Nancy at 10:58 PM