Rachel's baptism was a wonderful day! I'm so glad Grandma and Grandpa were here to help make it as wonderful as it was. When I told Grandma that I didn't know how I could have done it without her, she smiled and said, "You would have managed. Your friends would have stepped up to help." And that's true because we have great friends here. Still, it was nice to have Grandma helping. She adds a special touch to everything she does.

She made a beautiful remembrance book cake to help celebrate: 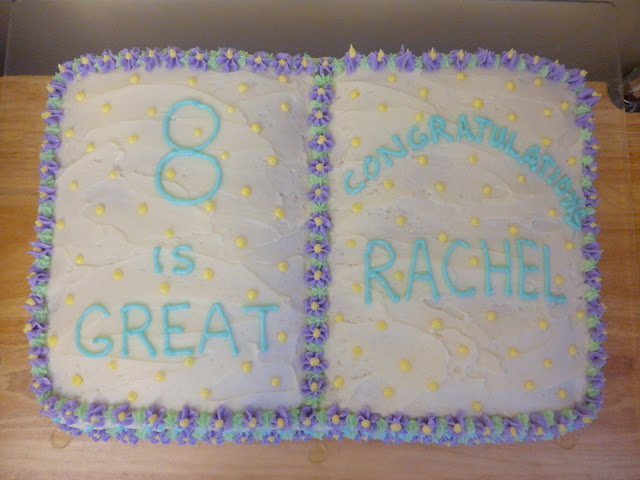 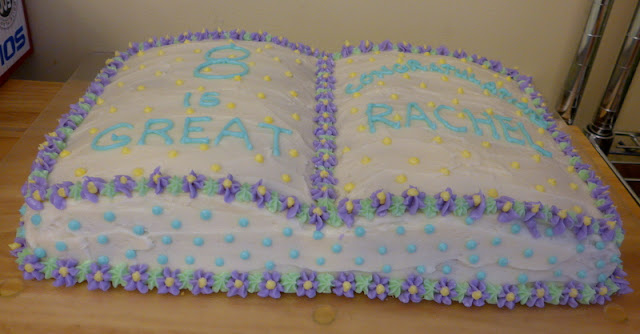 I should have taken a picture of the food table, I guess, since the spread was more impressive than it needed to be (we could have made half of what we did) and I had it set out on the beautiful table cloth that my friend Sara Lewis (not our aunt Sarah Lewis) got for me in Syria. This was the first time I used it. She gave it to me six and a half years ago!

Andrew got to the church around 4:00 to fill up the font while everyone else got ready at home. We made it to the church just after 6:00 and just before a terrific thunder storm. It was sprinkling as we were carrying things into the church and it started pouring just after we'd finished. Good timing!

Here's Zoë and Benjamin hanging out while everyone else was busy setting things up: 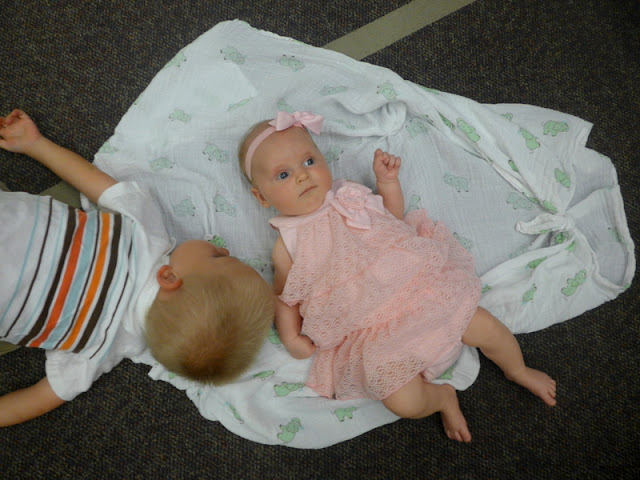 And here are the girls practicing the song we sang, while the font was filling in the background, and Andrew was fiddling with the video presentation on the side: 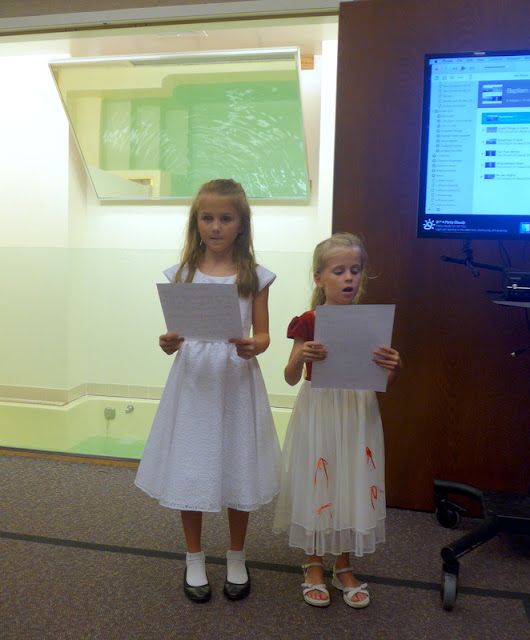 Miriam wanted to wear the white dress Naanii sent to her a while back but I asked her not to so that it could just be Rachel's special thing. I suggested she wear the yellow dress Naanii gave her at Christmas—it's nice and lacy and would look so nice with the lacy dresses that Zoë and Rachel were wearing—but, of course, she wouldn't take my suggestion and wore something different (a dry clean only dress that she spilled raspberries on; not that I'm bitter). Anyway, here's another shot of cute Zoë in her lacy dress (she's the only one who stays in one place long enough for me to take as many pictures as I want of her): 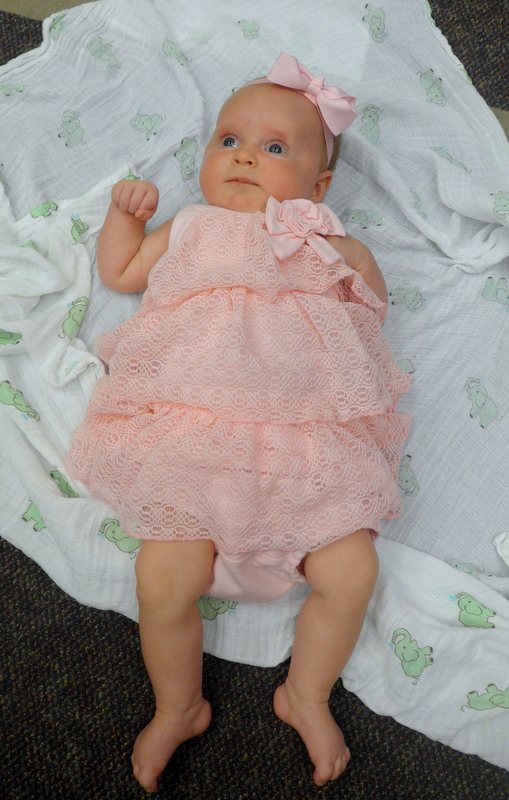 Soon it was almost 7:00 and Rachel changed into her white jumpsuit: 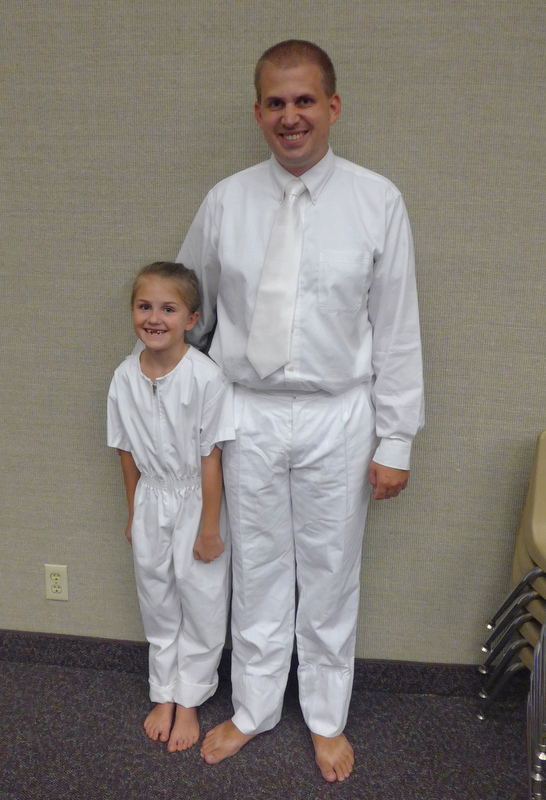 Jumpsuits are far more practical for a baptism because they don't float up to the top of the water like dresses often do (if anything doesn't get emerged you have to re-do the baptism, which is why I put Rachel's hair into a braid as well).

The program went off without a hitch. Rather than describing it all, I'll just post a picture of it: 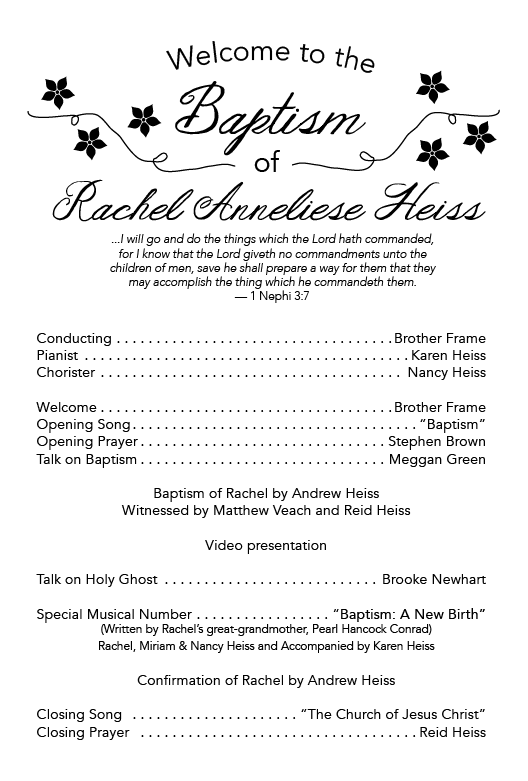 The bishop asked us to have some of the youth in our ward give the talks and witness the baptism so Rachel chose two of her favourite young women to give the talks. Finding witnesses was a little more difficult because we don't have very many priests (young men age 16 and up) in our ward so we asked Grandpa to be one of the witnesses as well.

We'd planned to sing "Baptism: A New Birth" with our friends Carolina and Laura Hennessee but Carolina started feeling sick in the afternoon and put herself to bed with a fever before dinner so Laura phoned to tell me they wouldn't make it. I missed her call, of course, so we didn't find out until we got to the church, but I think the girls and I did fine by ourselves. It was neat to sing my grandma's song on Rachel's special day. I've sung it before with my mom at various baptisms—for my sister and nieces and nephews—so it was a familiar song to me but was new for everyone else. People seemed to like it and I know that I always feel the spirit when I hear or sing it, so I hope that others did as well.

I watched a bunch of Mormon Messages while I was up late with Zoë a couple of nights and sent a few links to Andrew to start the playlist for the video presentation. He chose a few others. We got through the first two of our playlist (we're such fast changers).

We got through Reclaimed and Good Things to Come.

We had Daughters of God, The Ten Virgins, and Our True Identity as a cushion in case Andrew and Rachel took too long getting into dry clothes, but didn't end up watching them.

We forgot to ask people to stand in the circle when Rachel was confirmed and given the Gift of the Holy Ghost, so her circle was small: her dad, her grandpa, Brother Brown, and Brother Frame came up when it was time. Even the bishop didn't join in! I suppose we should have asked other priesthood holders to join in, but we didn't think of it. It was nice as it was, but we could have been more inclusive.

When we were all finished, we visited and ate refreshments. We had such wonderful people come out to support us.

Susanne, a regular reader of this blog, came and we were so excited to see her. She made fast friends with the kids; they had such a fun time playing with her! She also brought Rachel a gift—a journal, which Rachel's been quite diligent about writing in (she wrote about her baptism last night and about "Activity Days" tonight (a church program for girls 8–11 years old); and some coins for Pelican's, which caused much rejoicing in our house last night (the kids were dancing around the house and singing about how rich they were in "Peli-coins"). 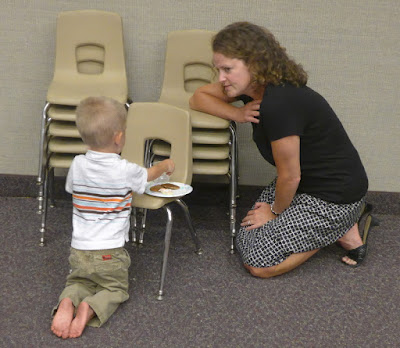 Nearly being torn apart by Benjamin and Miriam: 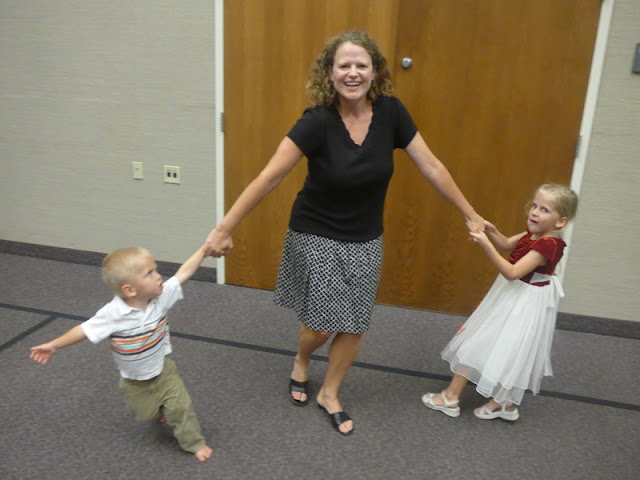 And posing for a couple pictures with the kids at the end of the evening: 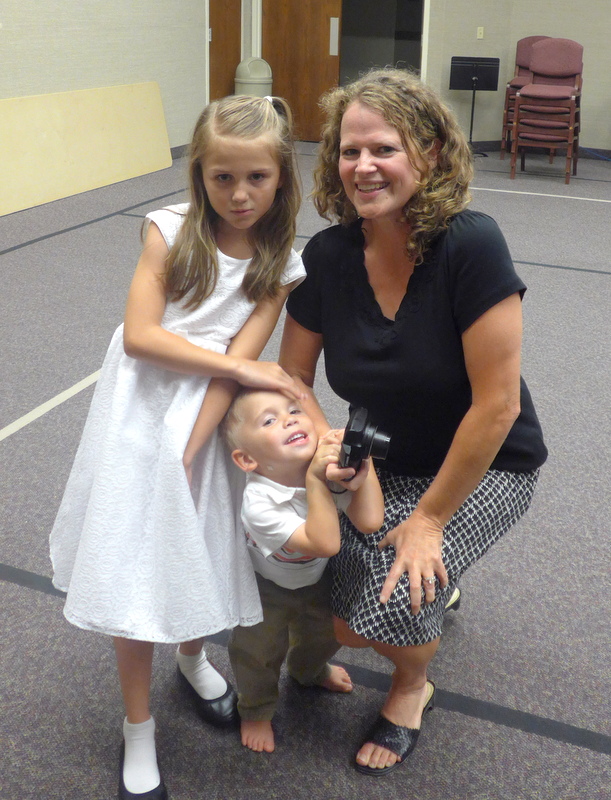 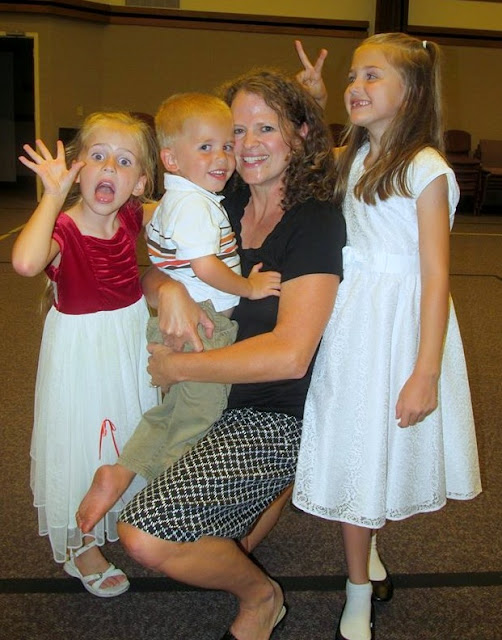 I'm afraid they might have run her ragged, but I'm so happy she came! She wrote the sweetest thing in her card. She said, "I look forward to seeing how you impact the world by loving and serving others. I hope you always stay close to the Lord. You are an amazing person. God bless you on your special day!"

Susanne is such a wonderful example to me of supporting others, whatever their religion of choice is. As long as people are choosing good things and getting closer to the Lord, Susanne is genuinely happy for them. She's always making an effort to really understand other faiths—be they Muslim, Jewish, or Mormon—and encourages all her friends to share their beliefs with her. (I love reading the discussions on her Facebook page).

Other people came, too!

Here's Rachel and Miriam eating with a few of their friends: 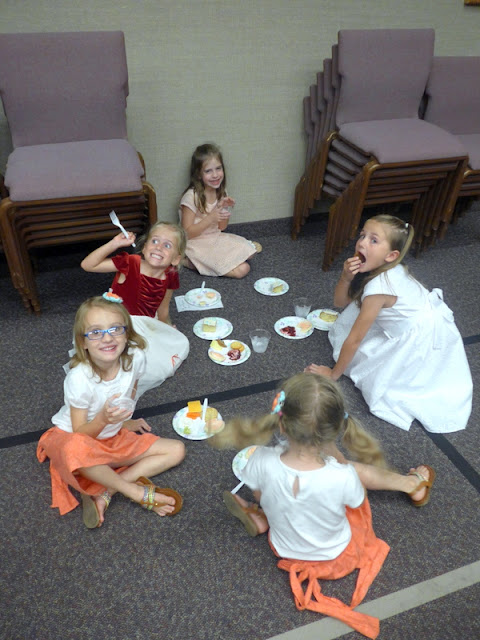 And here's Rachel's teachers from kindergarten and grade one visiting with each other:

Rachel's friend-from-school, Jordan, came with her mom, as well, and brought Rachel a lovely bouquet: 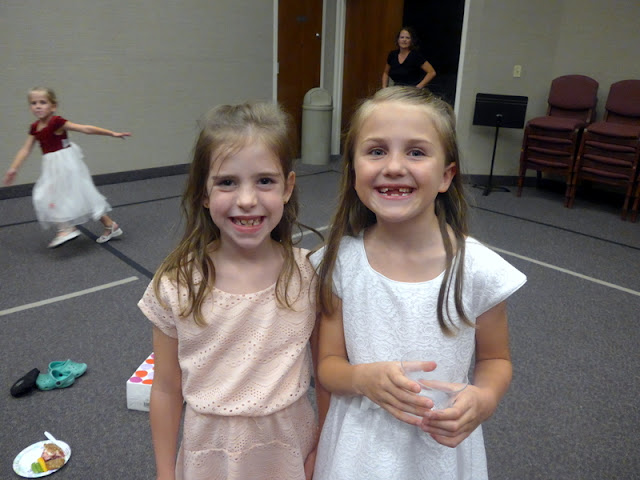 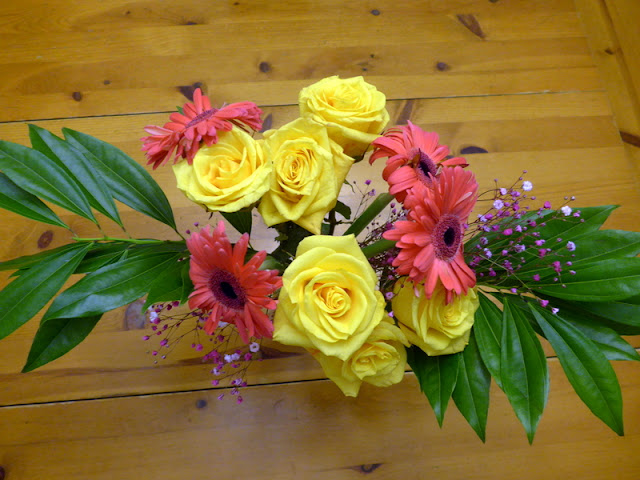 Then there were the ward members, as well: Brother Brown, Brother Frame, Bishop Veach and his wife and boys, Mary Moore, the Greens, Brooke, Sister Rubow, Sister Michael and her grandson, the Mortensens, and perhaps a few other people that I missed. Oh, and our family, Grandma and Grandpa, and cousin Scott (Angel wanted to come but she was sick so she stayed home with the baby). It was wonderful to have so much support! 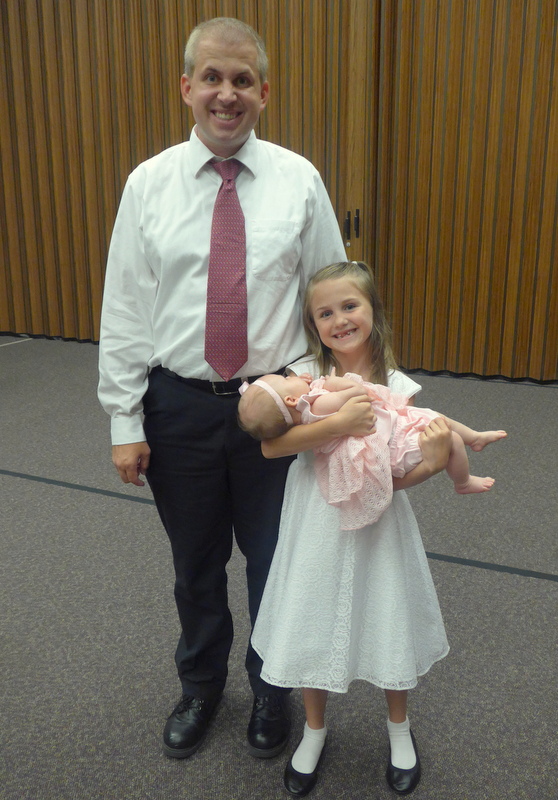 And here's our lovely family portrait from the evening: 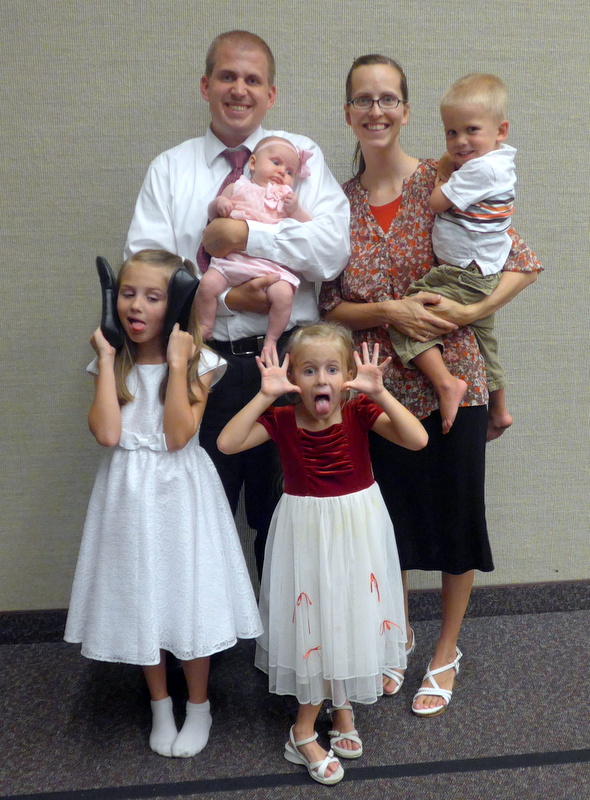 The kids were so riled up, but were nice and exhausted when it came time to put them to bed!
Posted by Nancy at 11:27 PM