The kids have been begging to go to the pool and so after the girls got home from school I took them.

I didn't have any excuse not to. We've been quite open with the girls about how babies are born (and the recovery time involved) so they knew I wouldn't be getting in the pool for at least six weeks. While we were talking with some people at the Anderson reunion, Miriam came up and said, "How old is Zoë now?"

"She's seven weeks old," I said, thinking someone had asked her and she wanted to relay that information, but no. Her response took me (and everyone we were talking with) completely by surprise.

"Oh, good!" she said, pumping her fist in the air. "That means your bum's stopped bleeding and you can take us swimming again!"

That was a conversation stopper, that's for sure!

Now Zoë's a full two months old and I still hadn't taken the kids swimming and I really was out of excuses (the kids don't think "four kids" is an excuse) so I took them. For the most part it really wasn't too crazy. The girls have turned into fine swimmers; that isn't to say I would leave them in a pool completely unattended but Rachel can swim across the pool just fine and Miriam can dive to the bottom and float on her back for a million years. They're both little fish these days.

Benjamin does alright if he's wearing his puddle jumper. And I put Zoë in a front carrier.

Playing in the big pool was fine but eventually Benjamin wanted to go to the baby pool so we all went into the baby pool and I took the opportunity to get Zoë out of the baby carrier (because after a while my back starts aching; she's getting to be quite hefty). Rachel held her in the baby pool for a bit. 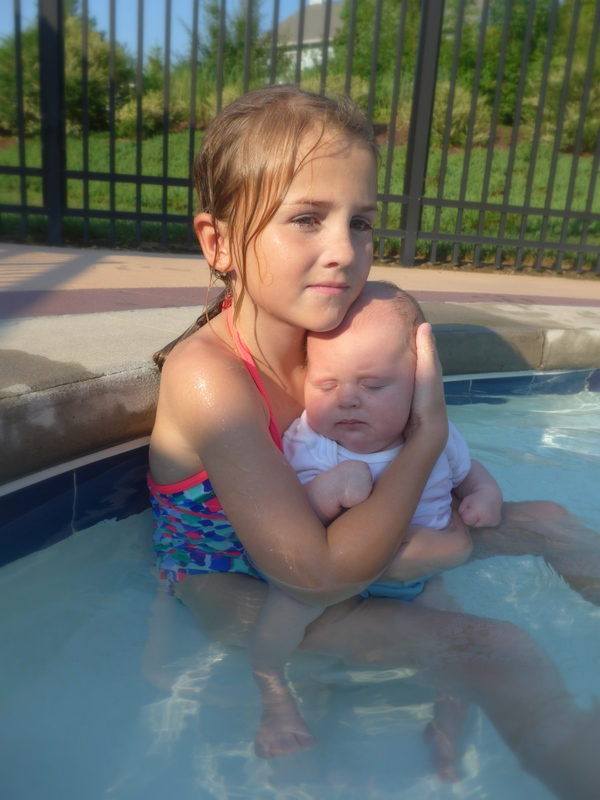 Zoë's not sleeping; she just hates having the sun in her eyes.

And here are our four munchkins all together: 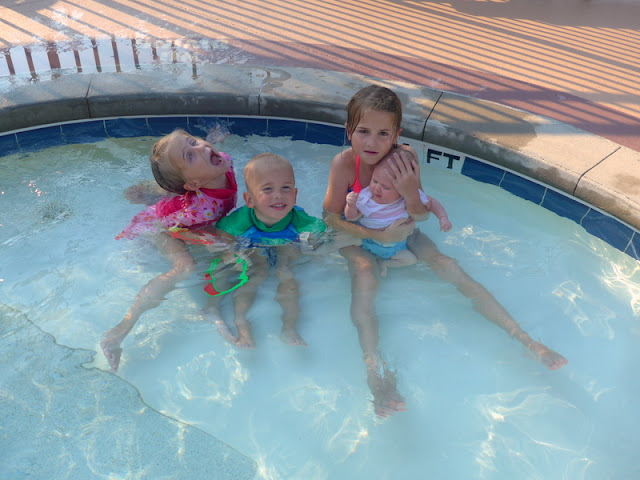 After I handed Rachel to Zoë I turned around and Benjamin was floating facedown in the water.

Floating. Facedown. In the water.

I panicked and picked him up.

And he seriously can. He can float facedown in the water on his tummy. I was pretty shocked.

Soon, though, the kids wanted to get back into the big pool. I took Zoë back from Rachel and then called Benjamin over to put on his puddle jumper. The girls jumped into the pool and started playing around together.

"I want to swim without my floaty!" Benjamin said.

"Okay, we can try that," I said, slipping the carrier over my head. After all, it would be a good time to practice floating in the big pool since he seemed to be able to do it in the little pool. "But I have to put Zoë in the carrier first so I can help you. Wait right here."

"I'm just going to wait by the pool," he said, as he walked over to the pool.

"Okay," I said, fiddling with Zoë's legs as quickly as I could. "But you make sure you don't get in the pool without me. You have to wait."

"I'm just going to wait on the stairs," he said, as he climbed onto the pool stairs.

"Benjamin!" I said, grasping at the baby's flailing, uncooperative limbs. "I told you to wait. You stop right where you are and wait for me!"

"I'm just going to jump in," he said. And he did. Because of course he did.

"Oh, Benny! Benny! Benny!" I shrieked as I sprinted to the pool, the baby—stuck half-way in and half-way out of the carrier—jostling along with me. I dashed/splashed down the stairs and yanked my drowning boy out of the water.

The look on his terrified, little face said, "What was I thinking?!" but he didn't say that. Instead he immediately started howling, so I said it for him.

"What were you thinking?!" I cried and then began alternating between ranting and soothing. "Are you okay? You do not do that! Are you alright, sweet boy? You are not a swimmer yet! Come sit on my lap. You are supposed to wait for Mommy when you have your floaty on so why would you jump into the pool with your floaty off?! Shhh...shhh...it's alright. You never get into the pool without a grown up! Do you understand me?! Poor baby. You need to obey."

After he calmed down I made him get into the pool without his floaty again. We practiced gliding and floating before putting his floaty back on so he could play with his sisters.

We had a good long talk about why it's important to follow the rules and obey your parents at the dinner table tonight. We don't ask our kids to do things (or to not do things) because we're mean and/or not fun but because we want to keep them safe and happy and we know things they don't know (for example, I knew that little boys sink; Benjamin didn't (he does now)).

Hopefully my contrary little boy will be a little more cooperative in the future...at least by the poolside!

PS. Yes, Mom, I've been checking on him every half hour or so after putting him to bed and he's still breathing fine. There was no drop in energy level before we put him to bed (and he was still bouncing off the walls about an hour after he was put to bed). He was only actively drowning for a few seconds and I'm pretty sure he managed to hold his breath the whole time—he didn't seem to be choking on anything when I hauled him out of the water.
Posted by Nancy at 12:02 AM