Last night I remembered two stories about our candy bomber day that I forgot to blog about but this morning I can only remember one of them, so I guess I'll tell that one and simply mourn the loss of the other one (until it comes back to me).

We were driving down to Orem for the first time this trip and Benjamin watched as Utah Valley opened in front of us, revealing a sparkling expanse of water.

I guess when they were in Nauvoo Andrew convinced the kids he was going to drive the van right into the Mississippi River and Benjamin thought it was a funny joke. (In the following pictures of the children standing in the Mississippi River, I'm told the van is parked just out of the frame and that Daddy kept inching closer and closer and closer before he parked while the kids were screaming their heads off...) 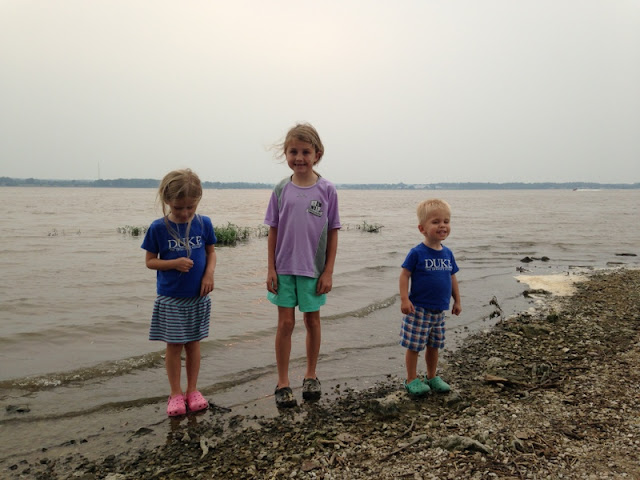 "That's not the Mississippi River," I told him. "That's Utah Lake."

So now he talks constantly about Ootah Ake.

He's also a little obsessed with ucky-mucky augie, which I guess is a phrase he learned from Little Einsteins (yucky-mucky water). When we went swimming with the ducks, the water was quite...ucky mucky...and Benjamin was thrilled to pieces about it.

Last night we went for a family walk ("sammy awk" in Benjaminese) and Benjamin spotted a stream.

That wasn't the second story I was planning on telling, but I got two stories down anyway, so I suppose it's better than nothing.
Posted by Nancy at 1:05 PM