Sunday was Riley's blessing day so we drove down to Payson to attend sacrament meeting at Auntie Sarah and Uncle Cory's ward. Our family took up a few rows—even Aunt Stacey came out (from San Diego now (she recently moved back there from New York))! We stopped by Aunt Sarah's house just before church to drop off some folding chairs and have a quick visit.

Here are the great-aunts with the babies (Aunt Nikki is holding Zoë while Aunt Stacey plays with Riley): 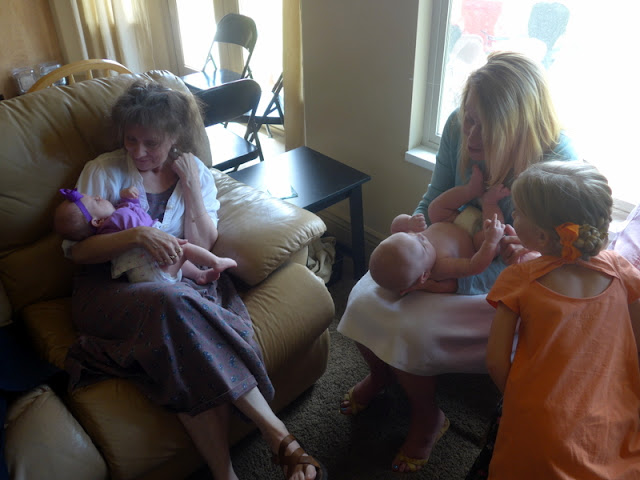 I thought this moment was too cute to pass up—Sarah and Andrew changing their babies at the same time: 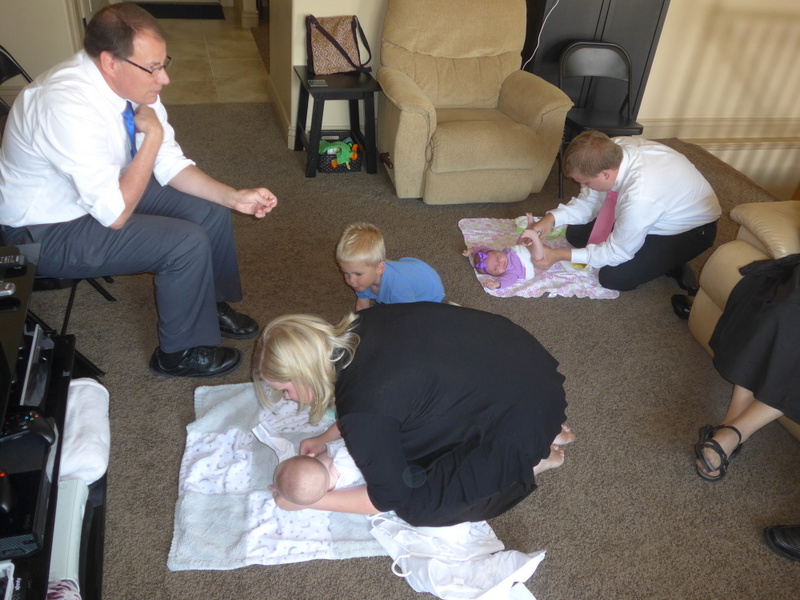 Riley's blessing outfit was a little too big for him. He looked a bit like he was trying to play dress-ups or something with his shirt sleeves flopping over his hands, but by the time Auntie Sarah and Great-Aunt Stacey had finished rolling his shirt sleeves and the cuffs of his pants he looked just fine in his four-piece suit. 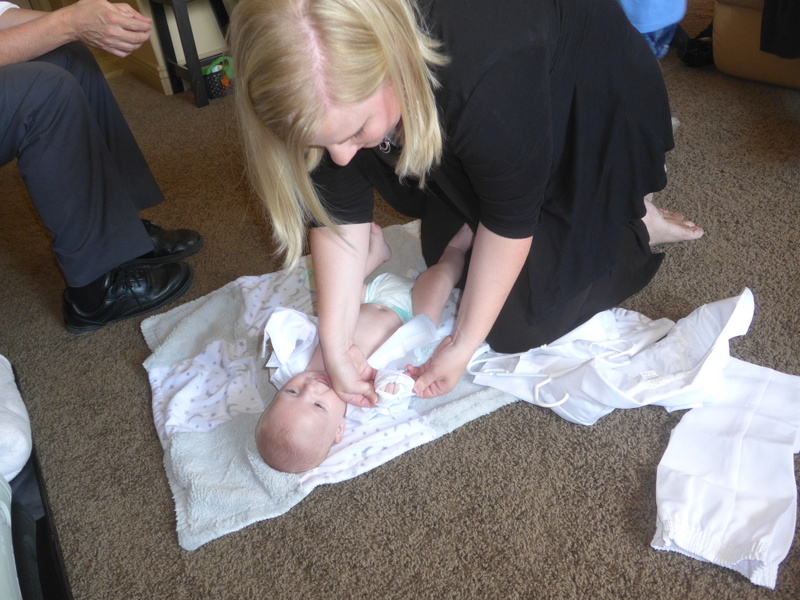 Sacrament meeting was lovely, of course, and the baby blessing went off without a hitch (though Uncle Cory was as nervous as could be). We had Kayl sitting with us and he was very good, folding his arms for every prayer (and making sure I folded mine...and then unfolded mine), and handing me the hymnbook so we could sing. He even patted Baby Zo a couple of times—and he's afraid of babies so that was quite the compliment! All the kids were good, really, though I only had to worry about Kayl and Zoë. My other kids were farmed out elsewhere.

Auntie Sarah played with Benjamin all through sacrament meeting. She ended up sitting almost all by herself because as soon as Uncle Cory sat back down Riley spat up all over him so he went home to change them both and Benjamin kept Auntie Sarah company. He can be quite entertaining.

After church we headed over to Sarah's house for a family gathering. Most everyone was able to behave in a civilized manner. Our family ended up sweeping and mopping Auntie Sarah's floor. Twice!

Miriam flipped a brownie off her plate and crumbs went flying everywhere.

Rachel's name was called while she was holding a cup of water and she turned around a little too fast and her water flew out of her cup.

Miriam flipped a meatball sub off her plate.

I asked Andrew to fill up my water bottle from the cooler and he started talking and forgot to turn it off until it was streaming out of my water bottle and all over the floor.

The only ones who managed to not make a bit of mess were Benjamin and Zoë, which is quite miraculous since they're among the messiest members of our family! Everyone else with little kids there had sense to eat outside. We couldn't because they have a dog and the dog was outside and dogs are terrifying therefore outside was terrifying. So instead we ate inside and made and cleaned up mess after mess and had a great time doing it.

Here's Miriam and Zoë with Grandma Pat and Aunt Stacey: 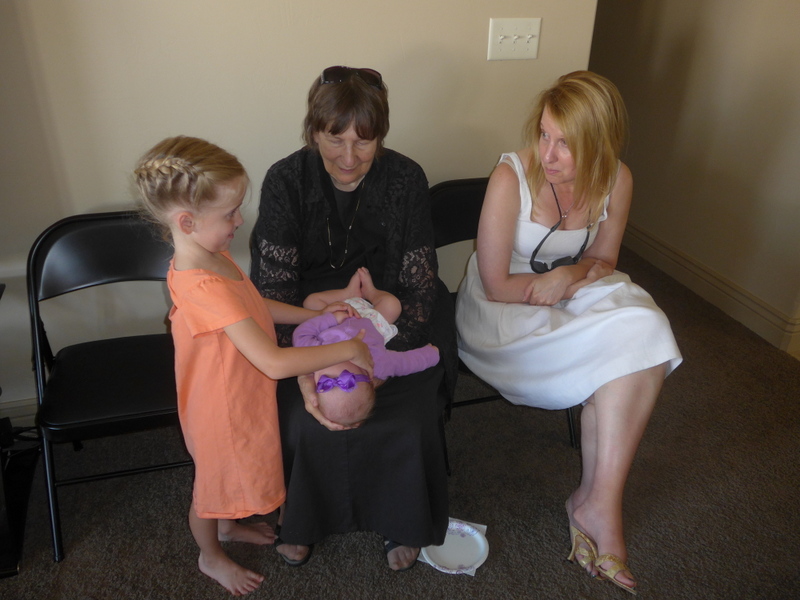 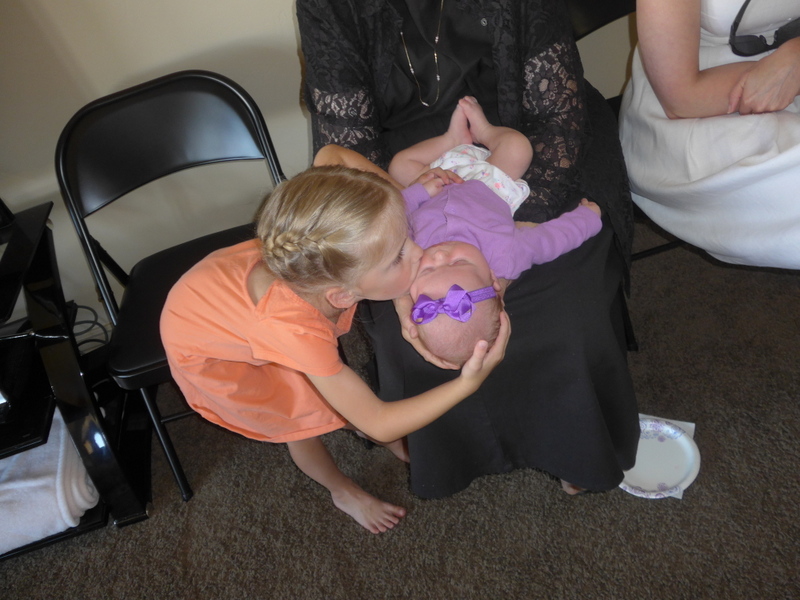 Uncle Cory is a police officer and Benjamin's currently obsessed with vehicles. He loves construction vehicles, he loves emergency vehicles, he loves semi trucks and convertibles. And he loves the people that go with them, too. He was so excited to re-meet Uncle Cory because he's a police officer! He was rather disappointed when we pointed to a man in Sunday clothes and said, "This is Uncle Cory!" because he was dressed all wrong for the part.

"Where are your clothes?" Benjamin wanted to know.

Lucky for Benjamin, Cory's brother is also a police officer and since he was on duty he showed up in uniform to participate in the blessing. It made Benjamin's day.

Later Uncle Cory took all the little nieces and nephews out to see his car. It made Benjamin's life. 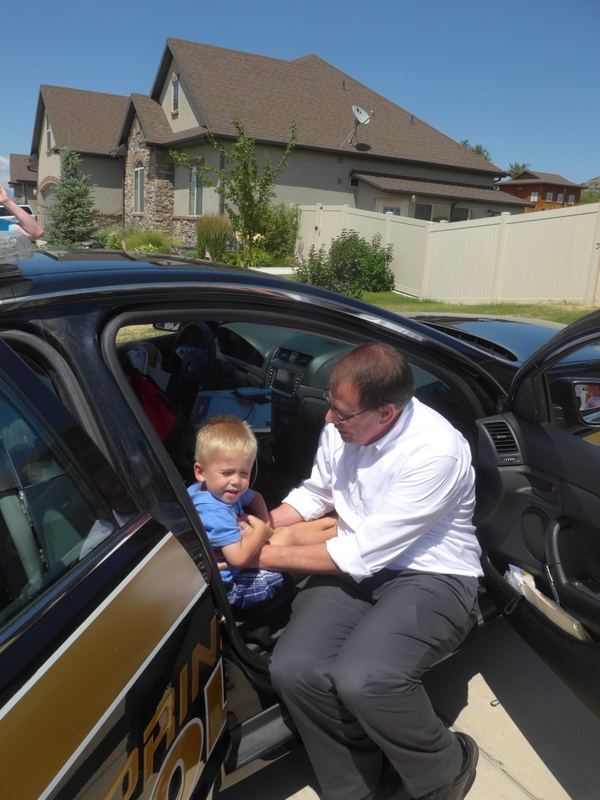 The sirens, though, were a little bit much for the kids. Benjamin said, "I liked that but...so scary!" 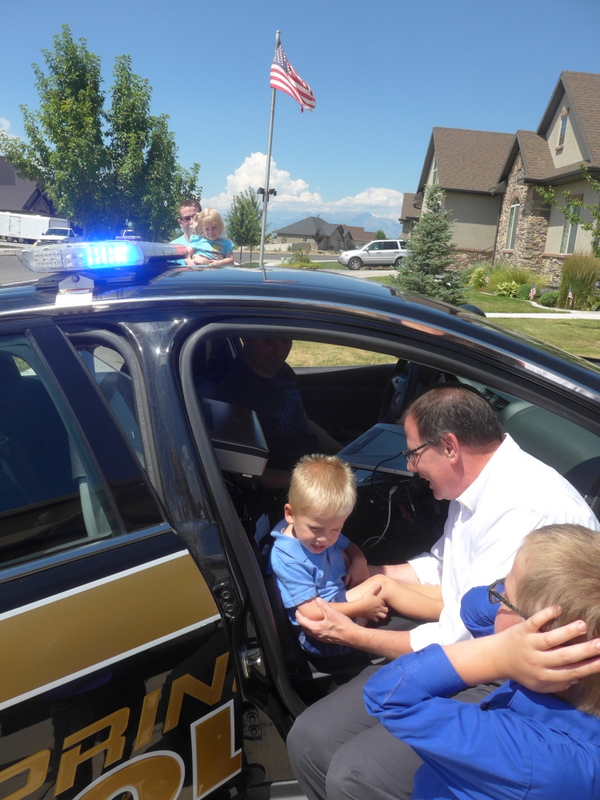 Rachel took a turn sitting in the patrol car as well: 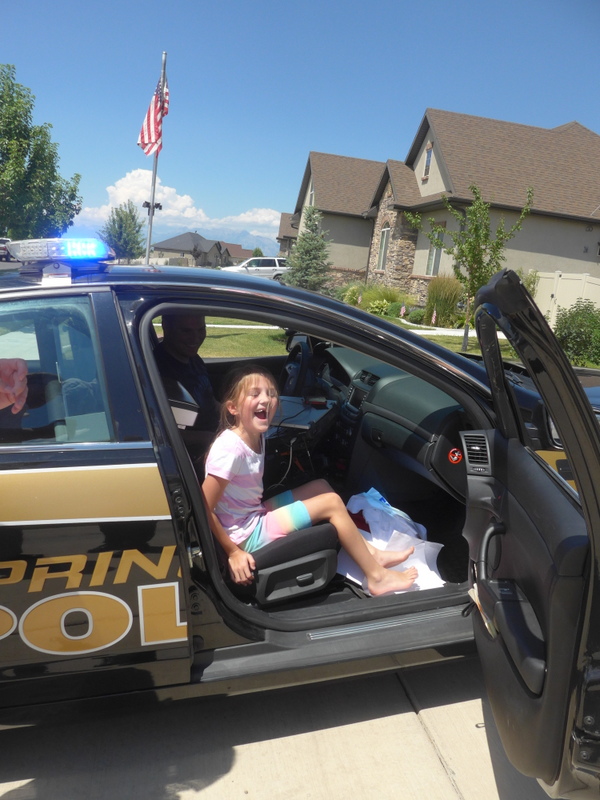 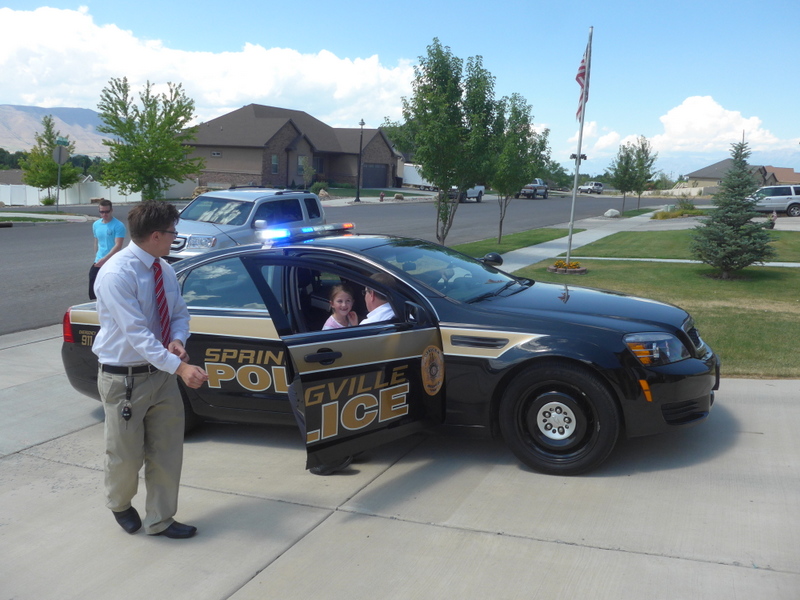 I don't know where Miriam was...was she out there? No pictures of her if she was.

Back inside everyone was still enjoying passing those babies around. Here's Stacey with Zoë again. We took several pictures of her because we haven't seen her in ages—not since Rachel's baby blessing, I think! 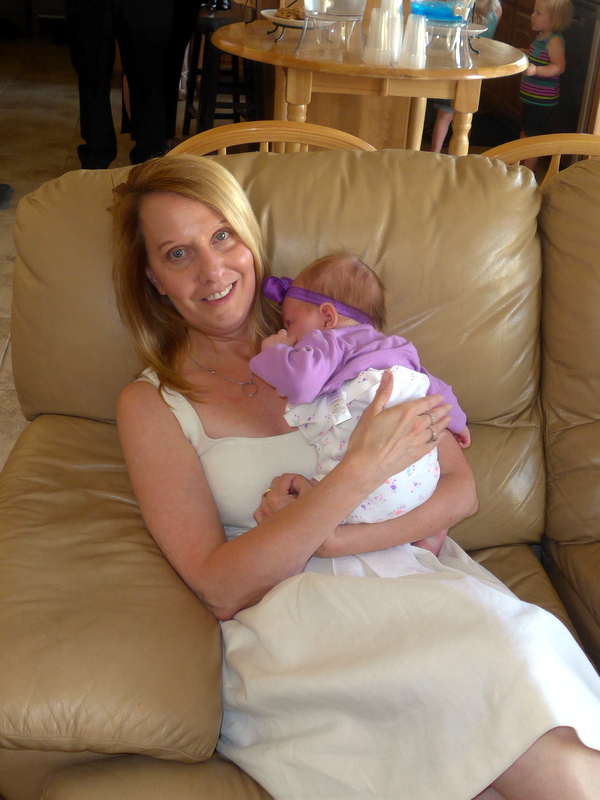 Rachel was our only child brave enough to make friends with the dog—Abby. She's a two-year-old German shepherd that Uncle Cory rescued while he was out on the job one day. Auntie Sarah was quite surprised when he came home with a puppy (she's a cat person (and has one of those, too: Hercules)). As a German shepherd, Abby's a bit of an intimidating pup, but after a few timid moments, Rachel was out there playing fetch and running all over the yard with her. They both liked each other very much. 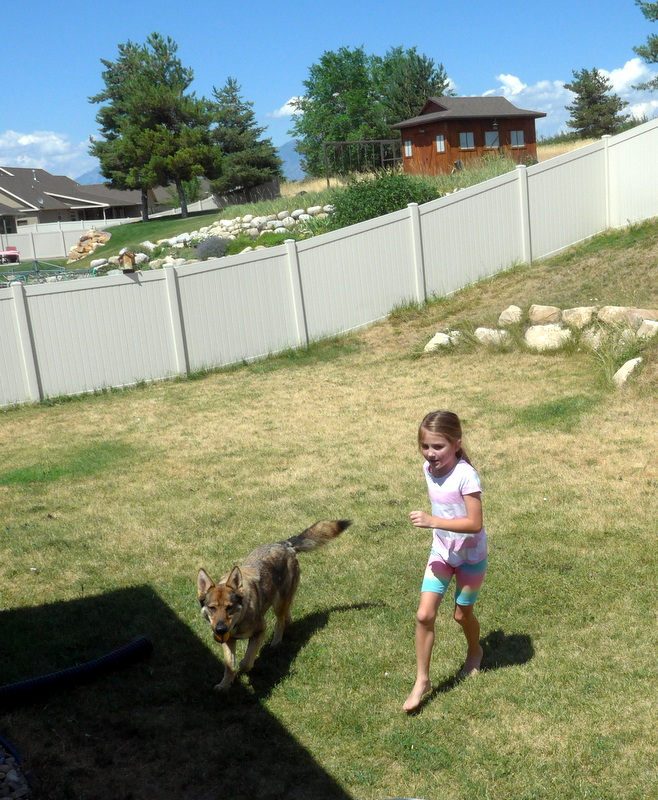 Here's the man of honor with his sweet mommy: 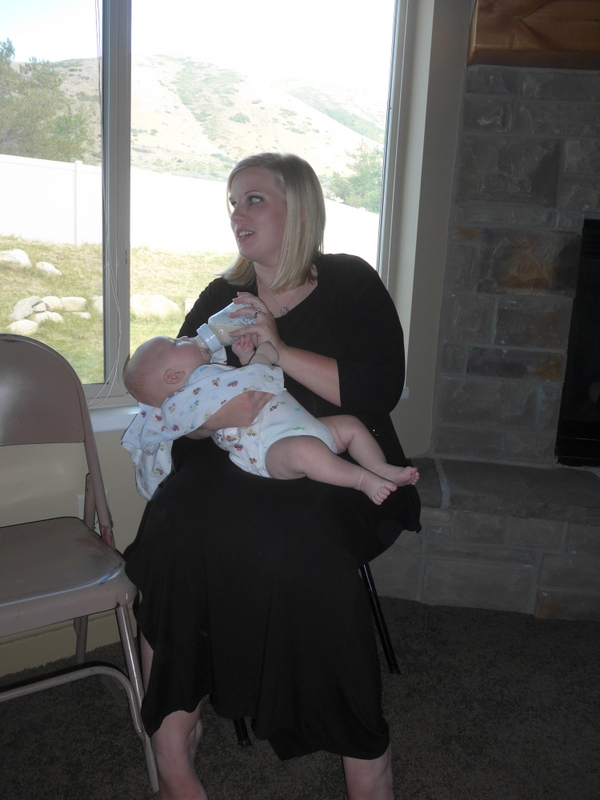 I wanted to get a picture with him and Zoë together but it was a busy day with so many people to visit so that didn't happen (at least not on that day—it did happen later in the week).

Here's Benjamin looking at pictures on Auntie Katharine's phone (mostly of himself, I think (children are such narcissists (says the mommy blogger))): 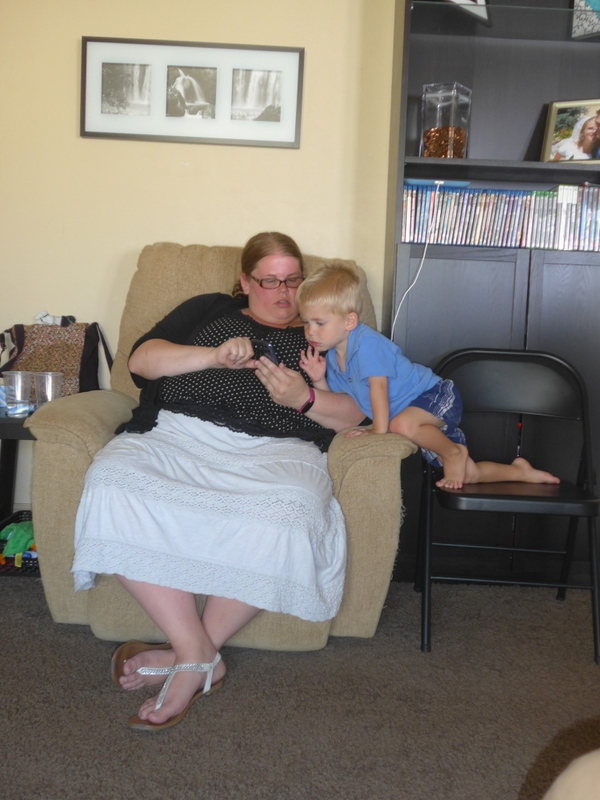 On the way home we stopped by the newly dedicated Payson temple. It is so beautiful. I kept seeing all my Facebook friends post pictures of their families after going through the temple during the open house and was a little bit jealous. I was happy to finally see it in real life because I think it's quite striking, but the open house is over so we couldn't go inside. I guess we could have planned to attend a session but I have a newborn who likes to eat all the stinkin' time, so we had to settle for a little taste of the temple from the outside.

Here we are, just Andrew and me and the kids: 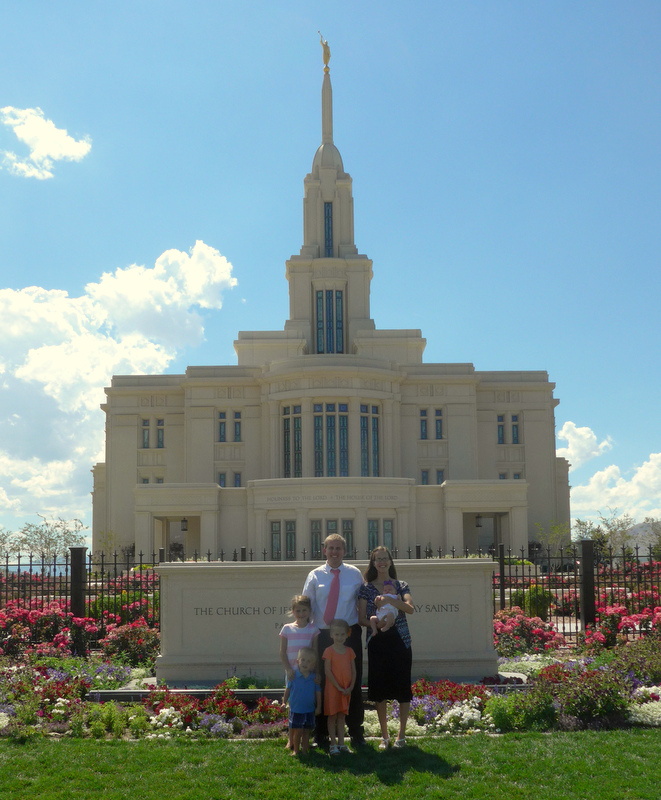 And here we all are with Grandpa: 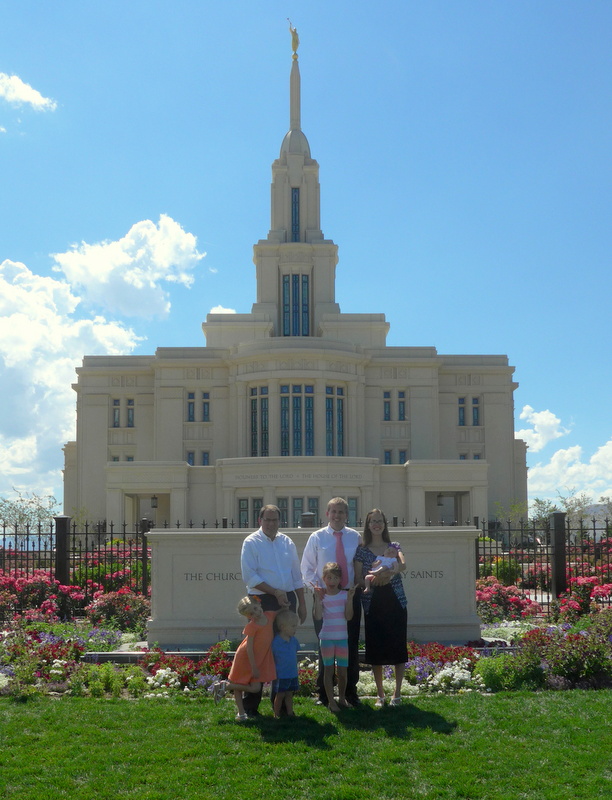 And here we all are with Great-Grandpa Frank: 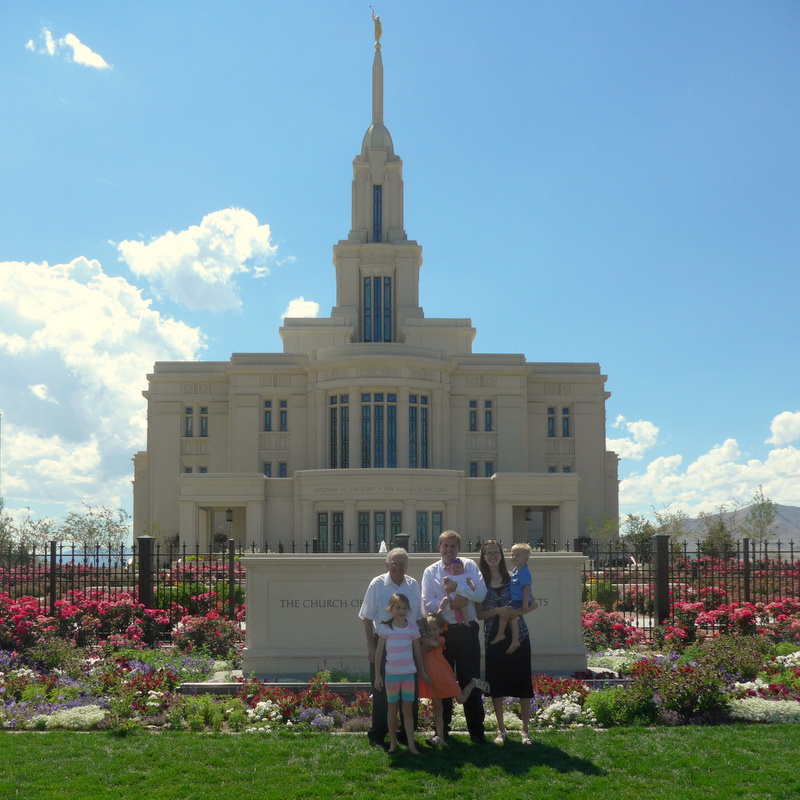 You can never take too many pictures, can you?

That's what my children are learning this trip!
Posted by Nancy at 1:53 AM