Genealogy of a Violin

Jean was kind of enough to share the story of the violin. These are her words, not mine:

William Lindsay lived in the small mining own of Kilmamock, Ayrshire, Scotland. Life was difficult in 1861, and William and his two young sons, Robert and Will (Jr.) all worked in the deep slate mines. When their work was done they went home to Momma Christian and their seven other siblings. William's one luxury was an old violin, and even though it was cracked it still had a nice tone that the whole family enjoyed.

The family had heard the missionaries from the Latter-day Saint church, and had been baptized, much to the dismay of their neighbours. The persecution extended even into the mines, and some urged the foreman to fire William because of his belief in that heretic[al] American religion. But the foreman told them William was a good man and worth ten of their kind, and he could work for the company as long as he wished.

William and Christian wanted to take their family to Utah and had asked for a loan from the Perpetual Emigration Fubd.But William would never make it. On October 17th, a loosened slab of slate slipped down the wall, landing on William, killing him instantly. Both Robert and Will were working in the mine as gatekeepers, and when they heard the rumble they grabbed their candles and rushed to their father until the foreman came down to find them.

Shortly after they buried their father the funds from the PPF came through and Christian and the family prepared to leave their homeland. They knew space would be limited as they were to join a handcart company in Missouri, but Christian was adamant about bringing the violin. She declared, "I'll carry it across the plains in my arms if I have to, but its the only remembrance of my husband I have left."

So the violin was wrapped in a bag, crossed the Atlantic ocean, and rode in the handcart to Utah, and then on to Heber where the Lindsays settled. By this time Robert had developed an interest in the violin and taught himself to play. He may have taken it with him when he went to court Miss Sarah Ann Murdock in 1868. She was the daughter of Joseph Stacey Murdock and his wife, Charlotte Eliza Clark. Joseph was a wrangler for Brigham Young and in his spare time wrote poetry. One of his poems was titled, "Come Listen to a Prophet's Voice," and was put to music in the church hymn book. Robert may have given the hymn a turn or two on his fiddle.


Robert and Sarah were married on December 15, 1868, and raised a large family of 16 children in Lake Creek, Utah. They remember their father sitting at the kitchen table playing that beloved violin.

When he died the violin went to his tenth child, Esther Melissa. She married Lawrence Albert Anderson on November 1, 1905, and she kept the violin in its new case, safely tucked away by the little pump organ in her home, while she raised eight children of her own.

In 1946 her oldest son, Theo, discovered the dusty old violin, just as his daughter,Jean (that's me) was taking violin lessons in the seventh grade. By then the violin was not in playing condition, but he took it to Peter Prior in Salt Lake City and had extensive repairs totalling over $300. The repairman said that the violin had been smashed in the middle, causing the crack down the side and breaking off the bridge that holds the strings up. The case holding the violin dates around the 1920s, purchased after its journey across the plains.

When Dad gave me (Jean) the family heirloom, I already had a $325 violin dad bought me for school, so I kept the old violin home for practice. I became another link in the violin legacy.

I played through middle school and most of high school. Bob Moore, when we were dating, would carry the violin for me after our performances, and people would say, "That was a wonderful concert. You did well." He'd just say, "Thank you," and wink at me.

After Bob and I married, the violin got packed away while we were busy raising our three kids, but when Karen, David, and Pamela got into high school, I picked up the violin again. I was in my 40s by then and it was hard to find a teacher who would even give me lessons, but I finally talked Sarah Penny into taking me. I was older but very dependable and Sarah and I became good friends. I took lessons and played in the Cedar City Civic Orchestra, sitting by Sarah for 22 years, until Bob and I retired and moved to Salt Lake Valley in 1994. Bob came to every concert I played, even though he does not like classical music, and presented me with a long-stemmed rose after each concert, even the ones played out of town.

During retirement, I was determined to keep up with my violin, but piano lessons got in the way, and the violin was packed away under the stairs.

Our Karen learned to love music and majored in vocal performance at the university. She married Robert Weidmann in 1977 and they raised five talented children. Her second son, Kurt, came to the University of Utah to study music; cello and guitar in 2010. He became principle cellist at the university. He and his wife Kelsey, and their two little girls cam over to visit and noticed the old violin in the corner. He dusted it off and tried to tune it but it needed repairs again. He took it to a friend who worked with instruments and had another $300 in repairs done and restored it again. Kurt brought it home to me with the admonition that I should practice everyday. I dug deep down into my music folders and found a couple of cello, violin, piano trios, and with Karen at the keyboard we sawed out a few tunes. Kurt was very patient with his mother and I. Even though I practiced regularly I never did find my full vibrato again, and my hands and fingers hurt more than they did when I was younger.

In 2014, Kurt arrived at the door with music for a trio he'd arranged of great-great-ever-so-great grandfather's song, "Come Listen to a Prophet's Voice." He says it's time for us to learn it and play the Lindsay violin in church. I will try but am I good enough? For our family this music and the violin span seven generations. I think they should like that!

Now Kurt will take guardianship of the old violin. He does play it, but he's more of a cello man. I wonder who will be interested next...Alexandra or Ivy? Of will Alyse's daughter Emma take an interest in violin? I know it will be in good hands with its fine genealogy.

William Lindsay, the original owner of the violin, and Joseph Stacy Murdock, who wrote the hymn "Come Listen to a Prophet's Voice" are Andrew's great-great-great-grandfathers (so our children's fourth-great grandfathers):


Here's Auntie Emily asking for a turn on the violin (Jean was more than happy to oblige): 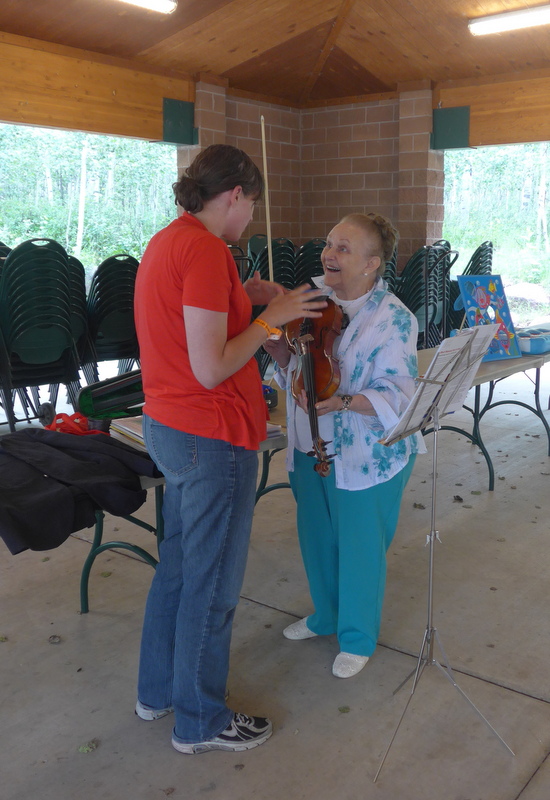 Her fingers were just itching to play it!

And here's a video of her playing it. Don't mind the shaky footage. I was bouncing a fussy baby (maybe mine, maybe hers—I can't remember who) and trying to get the action of everyone enjoying her music. Jean's husband Bob started dancing right away, cousin Marie began clapping in time to the music, and sweet Benjamin tried to get a dance out of little Emma (but she turned him down; "She doesn't love you," her older sister Ashlyn explained, "She loves me. Right Emma?").

Here's Andrew holding the violin. He tried to play but doesn't really know how and it came out all scratchy. 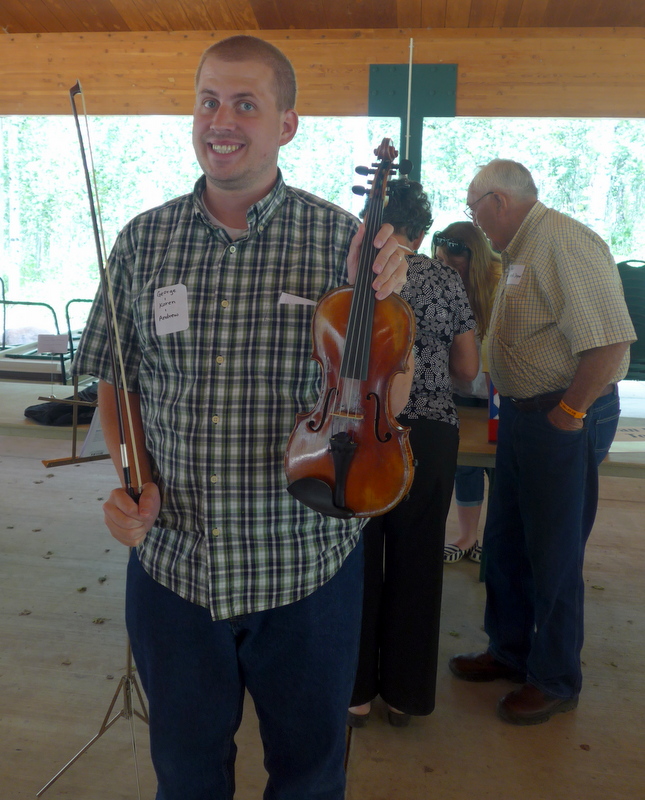 And here's Emily posing with the violin once more: 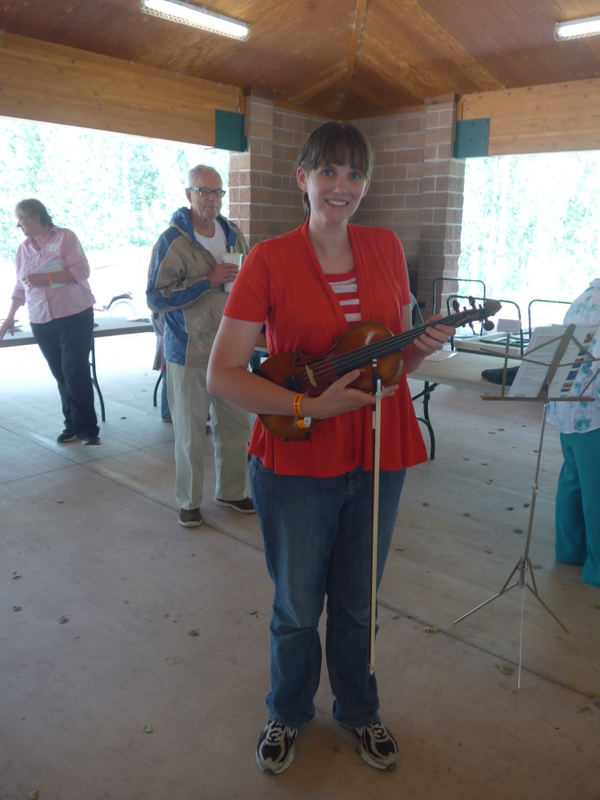 That was a pretty fun bit of history to learn!

And...surprise! The bit about Benjamin asking his cousin to dance is in the video of Jean playing. Here's that video: