Zoë and I arrived in Utah early on Sunday afternoon and everyone showed up to meet us. Uncle Patrick, Auntie Josie, and Naanii were waiting for me at baggage claim while Bumpa drove around and around in the pick-up line waiting to pick us up in his new van (he was tail-ended a little while ago and the Sunfire was totaled). It was a little weird to be picked up in a car I didn't recognize. My parents had had the Sunfire for just about fifteen years on the nose. They bought it when we first moved to Utah while David and I were at ballroom dance camp (and rooming in the dorms), so when they picked us up on the last night it was in a car I didn't recognize—the Pontiac Sunfire—and now the Sunfire has gone to the big racetrack in the sky and I was again picked up in a car I didn't recognize.

The craziest part about that story—for me—is that it means my family has lived in the United States for fifteen years! That's half my life (though I did take some time off to live in Russia, Jordan, and Egypt) and I still don't feel entirely Americanized ('cuz I'm not, I suppose).

Anyway, here is Zoë being held by Bumpa Bruce for the first time. I don't know who was more excited about it (wait—yes, I do—it was Bumpa (Zoë is difficult to excite)). We had to take a picture with Naanii in it, too, because all three of them dressed in pink! 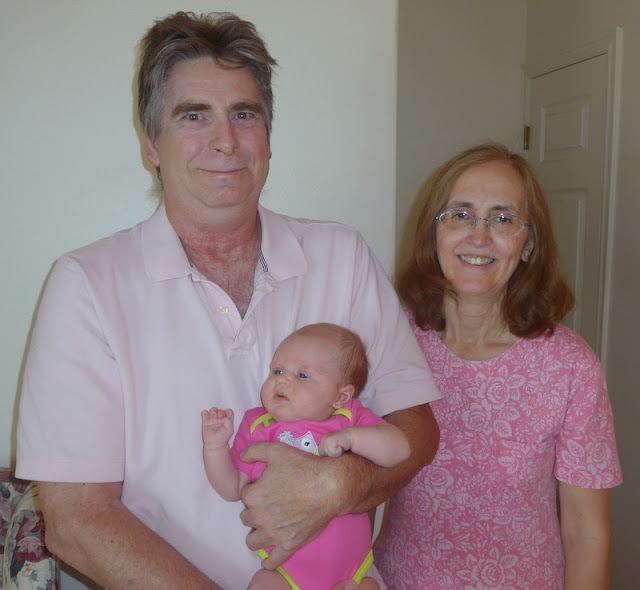 Auntie Josie graciously shared her room with us, putting up with all those newborn noises that are so cute during the day but so annoying at night. One night, after Josie and I had been trying to go to sleep for a few hours and Zoë was grunting, groaning, wiggling, and moaning, I said, "Zoë! What is your deal? I need you to settle down and sleep!"

I thought that Josie had already managed to fall asleep (though how I couldn't fathom because Zoë was being so noisy!) but when I expressed my exasperation Josie giggled about it. Hopefully we didn't disrupt her sleep too much.

At any rate, Josie seemed to have a lot of fun snuggling Zoë whenever she could. She's really come to embrace her role as aunt in recent years. When nieces and nephews first started joining our family she wasn't all that into it—of course, she also wasn't born—but now that she's a couple decades older than her nieces and nephews she seems to be enjoying it a lot more. The poor girl spent her life being lumped in with the next generation, but with my kids she's finally old enough to seem like an aunt to them. Of course, my kids kind of lump their cousins into the aunt and uncle category as well... 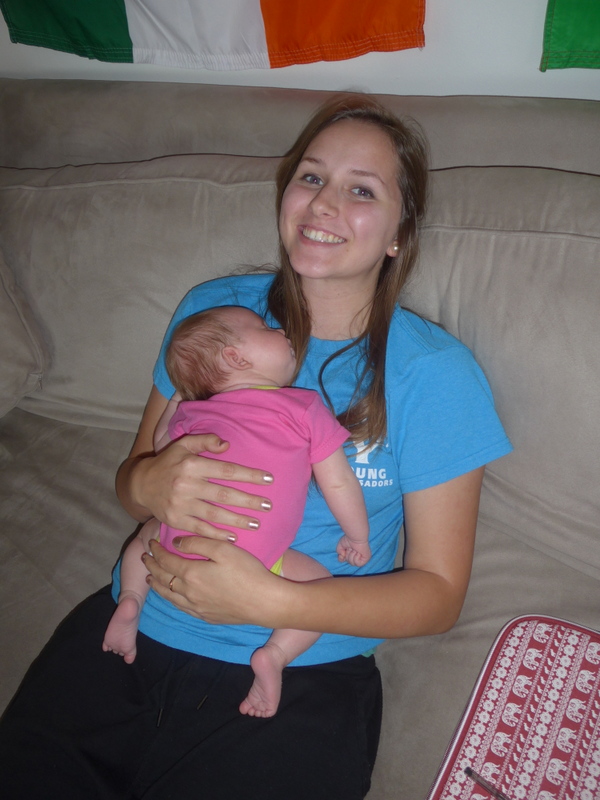 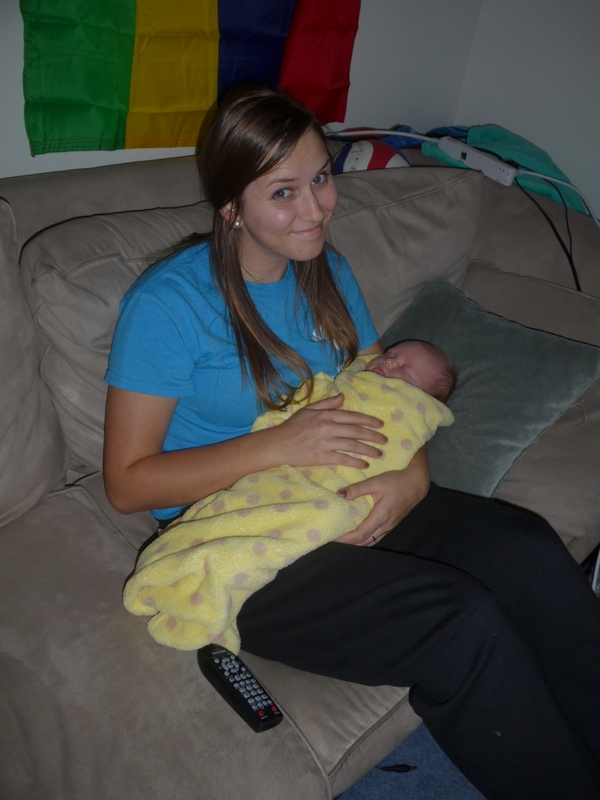 Oh! I forgot to write a story about Rosie (speaking of cousins that my children consider too old to be cousins). Rosie is one of Miriam's absolute favourite names. Rosie, RoseMarie, Rosemary, or any variation thereof—she just loves the name. Anytime she brings it up I remind her that she has a cousin whose name is Rosie.

A couple of weeks ago she brought up the name again and I said, "You have a cousin named Rosie, remember?"

"You met her at Christmas. She came to Naanii's house a few times to play games. She's all grown up and has long blonde hair..."

I told Rosie that we'll have to replace that particular memory with a more positive association this trip.

Let's see—the last tidbit from Sunday, I guess, is that Uncle Patrick made some delicious barbecue chicken and cabbage rolls (a Chinese dish, I believe) for dinner that he steamed on his new bamboo steamer. They were quite delicious. He really enjoys cooking and eating, not that he looks it.

The other day he brought home a package of key lime Oreos that he wanted to try, but he doesn't really like Oreos so I think my mom and I ended up eating most of them (because they had a graham cracker cookie instead of a chocolate cookie, otherwise we wouldn't have).

"I don't really like Oreos," Patrick said. "These ones are okay, but I still just...don't like Oreos. Regular Oreos are the worst. I can't eat them without feeling sick."

"Don't you remember?!" I asked. "You throw them up! I remember more than once having to help clean up Oreo throw up—and it's so disgusting! It's a blackish-purplish colour and..."

"That's right!" my mom said. "We had that stain in the carpet for years! We never did manage to get it out all the way!"

I would say that it's still in the carpet but I know the people who bought our old house (fifteen years ago this year) tore out the carpet and put down wood flooring (so that means our carpet is somewhere in the dump...probably with regurgitated Oreo stains still on it). And I swear that Oreo throw up happened multiple times to poor Uncle Patrick (either that or I have recurring nightmares about it) so it's no wonder he still doesn't like Oreos today.
Posted by Nancy at 6:23 PM