Five years ago I attended my first Anderson family reunion. It was fun to meet many of Andrew's aunts and uncles and cousins that I hadn't met before and to get to know better the ones I'd already met. It was also a little uncomfortable for me since I'm...well, I'm an introvert. Trying to get to know so many people (Karen comes from a family of eight children, most of whom had several children, many of which have several children of their own) at once was a little overwhelming, but it's also so very important to me to know Andrew's family.

When I think of Genesis 2:24 (Therefore shall a man leave his father and his mother, and shall cleave unto his wife: and they shall be one flesh) and becoming "one flesh" I think part of that is not only learning to rely on each other (rather than on your parents) but also accepting your spouse's family as your own.

It was interesting to see the change of heart I've had in five years. Whereas five years ago I still felt a bit like an outsider, this summer I was excited to get to visit with cousins we hadn't seen in years. We've had so many changes to our family the past five years. Aunt Susan passed away; several cousins (including two of Andrew's siblings) have gotten married, adding new in-laws; a few cousins have gotten divorced; and many, many babies have been born (five more grandkids for Reid and Karen, alone). And I feel like I'm a part of it all.

Because Andrew's part of it and our children are a part of it, I'm part of it (even if I'm not flesh-and-blood Anderson). And because I'm a part of it I think I should be fully invested in it, and so I am, and I can honestly say that while I might have been shy about meeting this crew five years ago, I now love them all so much and was so happy to get together with them!

Anyway, the first day of the reunion was for George and Delsa's progeny—Karen and her siblings and their children and grandchildren. Everyone from our little family was there (except for Uncle Cory because he had to work); everyone from Uncle Clark's family was there (except for a few husbands who had to work); Aunt Linda and Uncle Trevor were there (it was Uncle Trevor's first trip after the accident that left him paralyzed); and Aunt Dorothy and Uncle Raymond were there with several of their children and their families.

Rachel found a moth while we were setting up tables and chairs. It wasn't able to fly very well so she carried it around for quite a while. 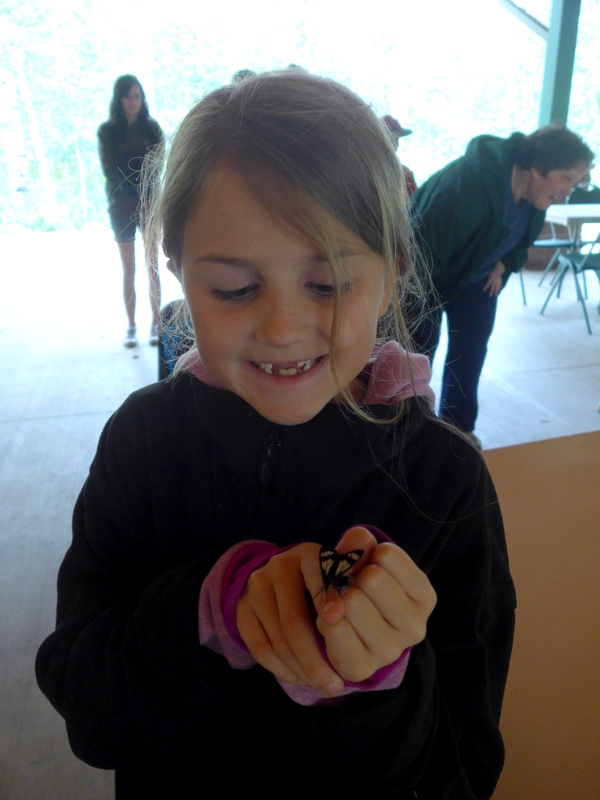 The kids and I went for a walk to put up a sign directing people to our reunion.  Benjamin was nervous about getting lost, I guess, because when I said, "I'm not sure this is the right way..." he stopped dead in his tracks.

I tried to assure him that even if I wasn't exactly sure we were going the right way that I knew exactly where I was and where our camp was but he remained super nervous until we were safely back at the pavilion. Rachel was pretty calm about the whole thing, though. Here she is by a flower she liked: 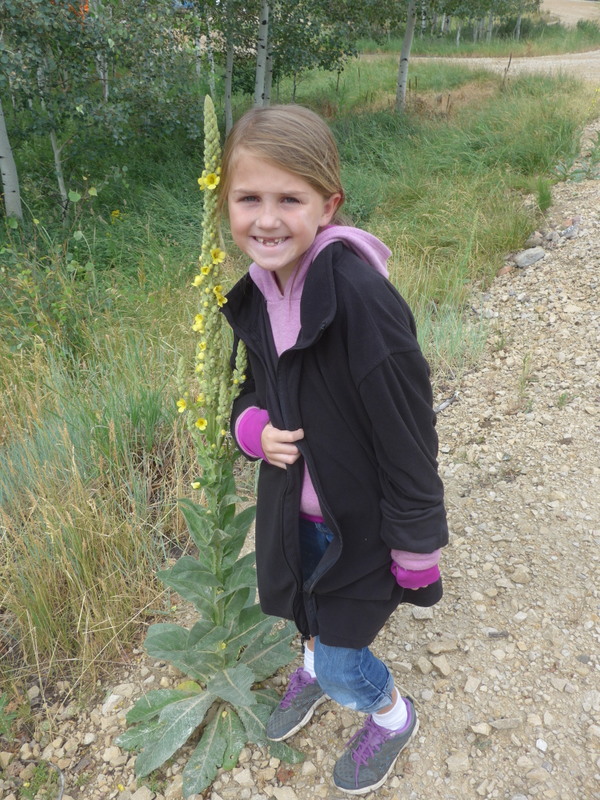 Back at the pavilion the kids played by some rocks (we have pictures of the girls playing here when they were littler—while we were camping with the BYU kids). 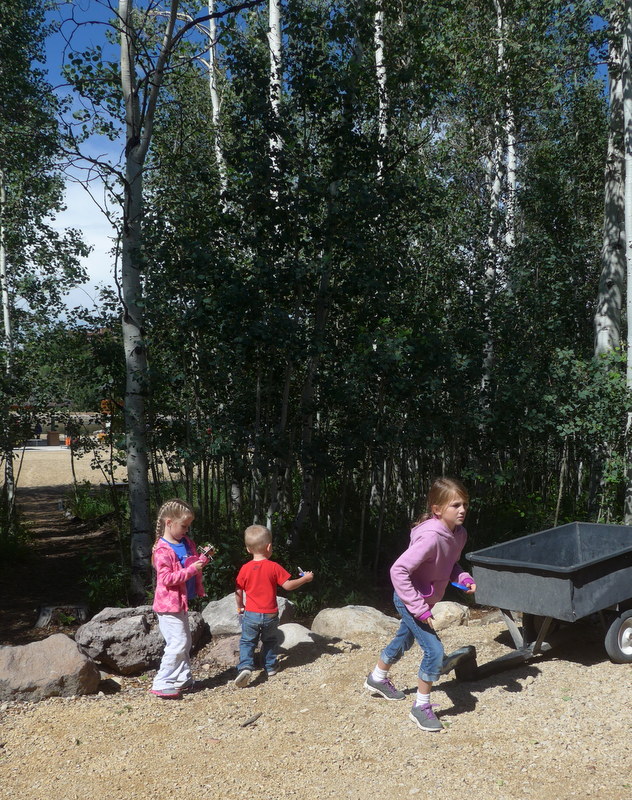 Grandma brought little airplanes and frisbees for the kids to play with. They took them down to the volley ball pit and tried throwing them over the net. 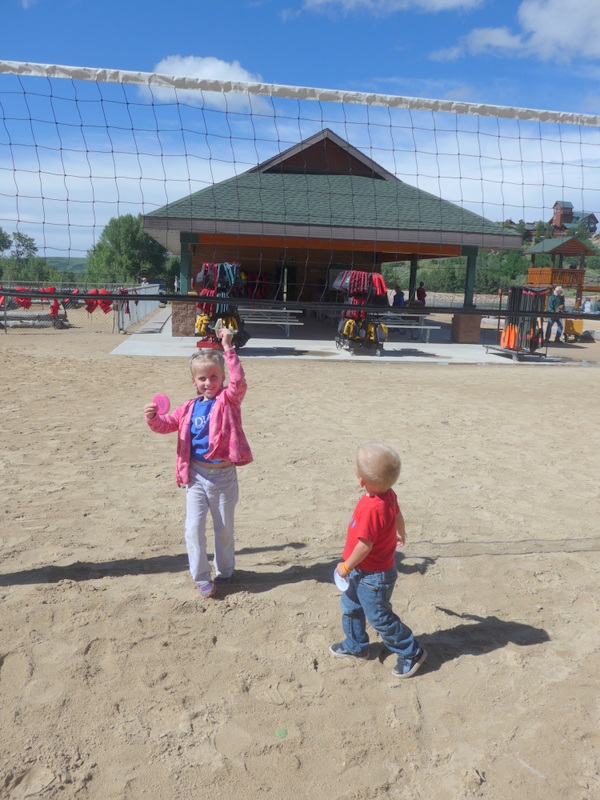 When that proved too difficult they settled on throwing them to at Auntie Shayla. 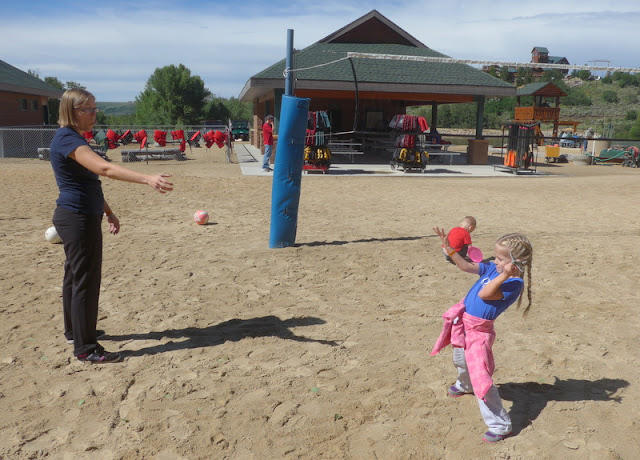 We were rather excited when Auntie Emily and her family showed up; they live in Idaho so we hadn't seen them yet.

It was hard to catch anybody with empty arms; with all these babies around it felt like we were playing a game of "musical babies" (like musical chairs...only with babies instead of chairs (and holding rather than sitting)).

Rachel re-found the moth she'd released earlier and she and Kayl had fun looking at it. 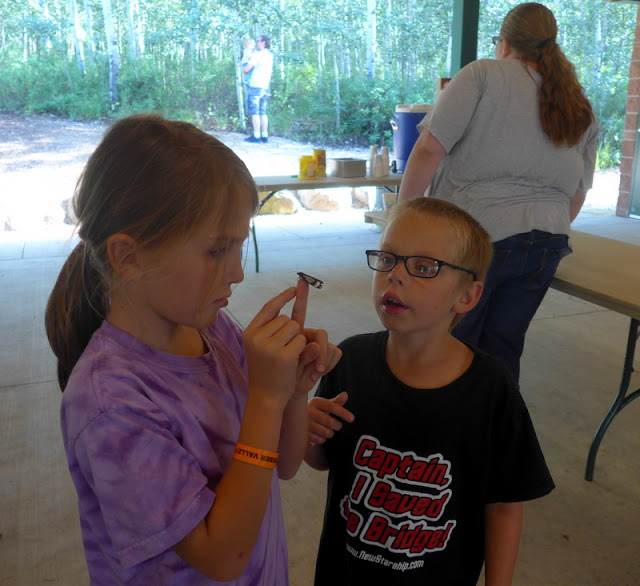 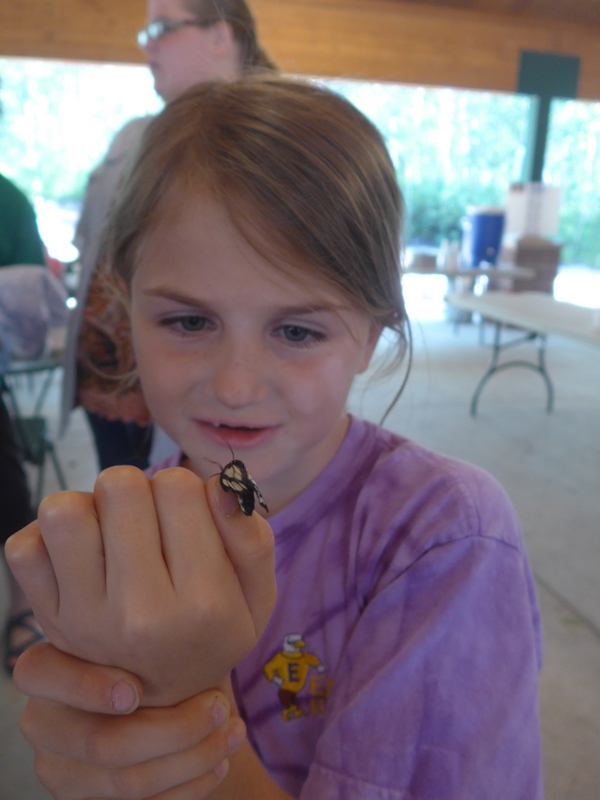 The little cousins designated the rocks by the pavilion as islands and set up little fortresses on top of each one. Here's Miriam's: 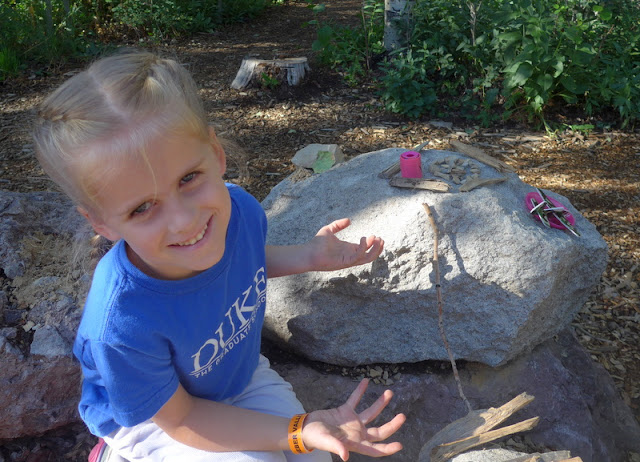 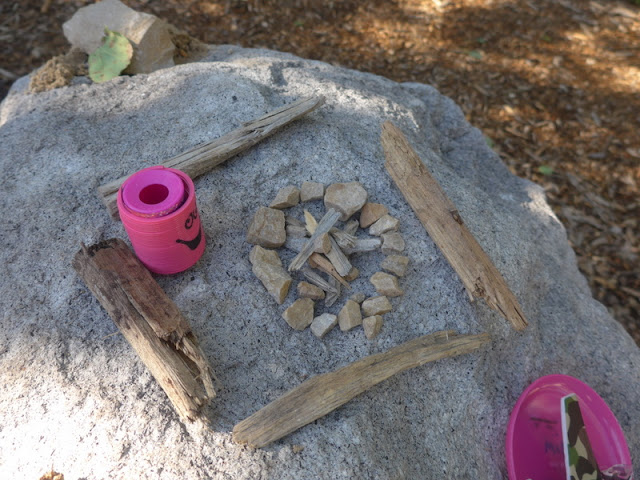 And here she is with Jessica's little girls:
These four were as thick as thieves the whole weekend! (Rachel preferred to play with Ken's daughter, Natalie, who is ten). 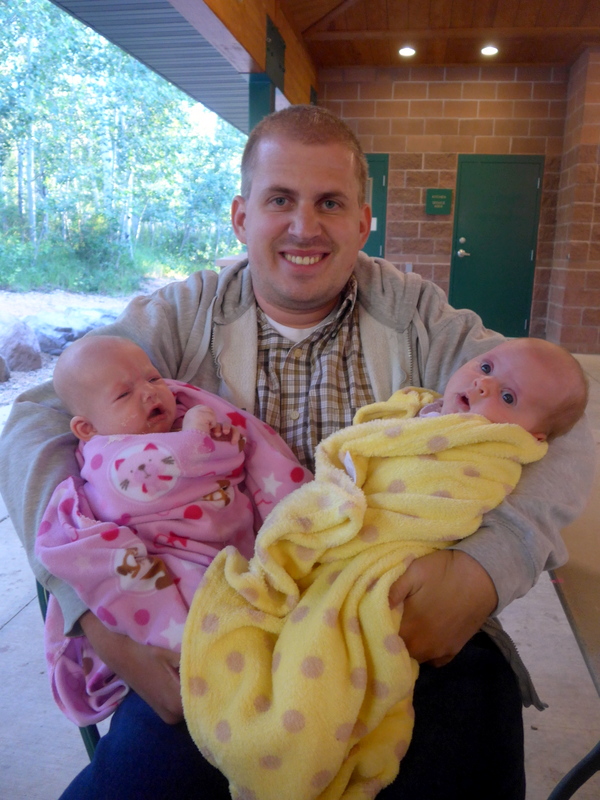 Maren's upset because I caught her just after she spit up. Being around Maren and Riley made me so very happy that I (finally/for once) have a baby who can hold her liquor milk. It's so nice to hardly have to worry about burp cloths and wardrobe changes! Zoë gulps down and—equally importantly—keeps down her milk; Maren and Riley are both serious spitters.

I don't even feel bad for saying that because before Emily left to go back to Idaho she told me that spending the weekend with Zoë convinced her there's nothing wrong with Maren, who cries about as much as you'd expect a baby to, after all! Gavin hardly ever cried when he was a little baby, so when Maren came into the world crying a normal amount it felt like Maren was crying an awful lot and Emily began to think there was either something wrong with her mothering skills or something wrong with Maren. But Zoë cries (and screams) as much, if not more, than Maren...so everything's normal.

Once again, I'm so glad I got a hard baby first—my sweet baby Rachel, who never slept, spat up constantly, had so many blow outs it's not remotely humorous, and could scream for hours. Let's not even talk about how she was crawling before her peers were even rolling over...

Your first baby becomes your measuring stick for future babies, I feel. Rachel set the standard for "hard baby" pretty high so Miriam, Benjamin (not counting the NICU), and Zoë's babyhoods have all seemed like small potatoes compared to the nightmare that was Baby Rachel.

Gavin, on the other hand, was a dream baby (from what I hear). He was born content with life—rarely fussing, he's been a sweet, quiet creature his whole life. But even easy babies are exhausting to new parents and Emily thought that Gavin, who exhausted her, was what was normal. And then she got Maren, who cries and spits up and...what is wrong with this child?!

Well, apparently nothing because Zoë cries as much, if not more, than Maren and I'm always saying things like, "Isn't she just the sweetest, easiest baby ever?" 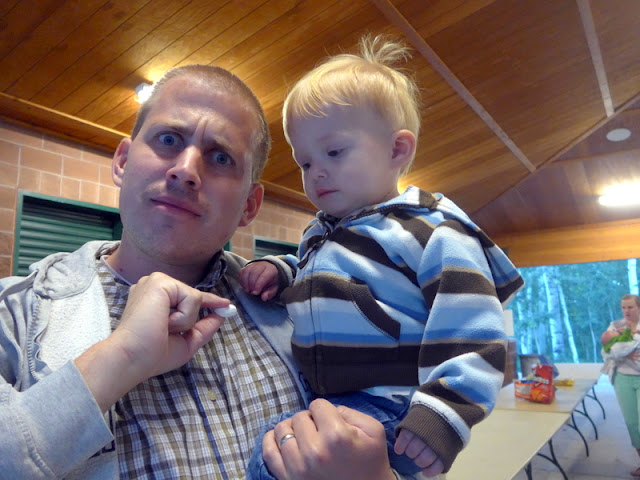 And here's a little snapshot of the family meeting we had: 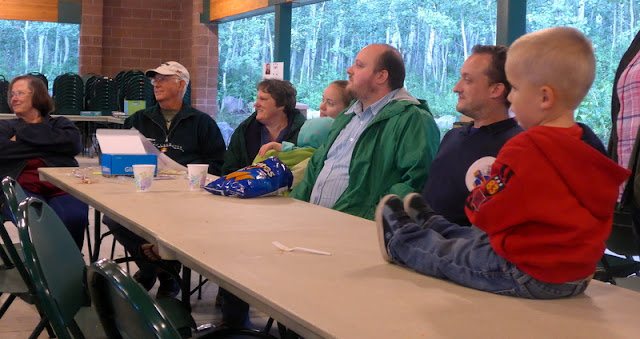 It was so chilly the first day we were there; everyone wished they'd brought better jackets, but we'd packed for the middle of summer. To keep the little babies warm—and to give them some time to stretch after they'd been swaddled all day long—we retreated to the cabin.

One baby kicking around on the floor is cute. 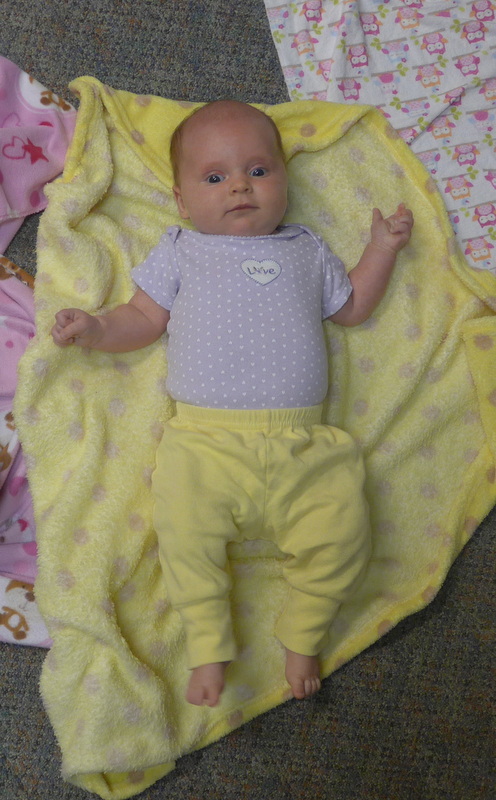 Two babies kicking around on the floor is even cuter. 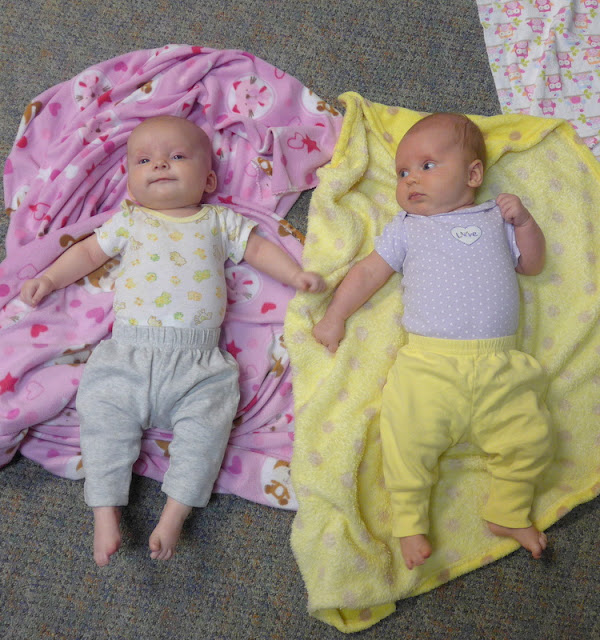 But add a third baby into the mix and, oh, man! We were dying of cute! 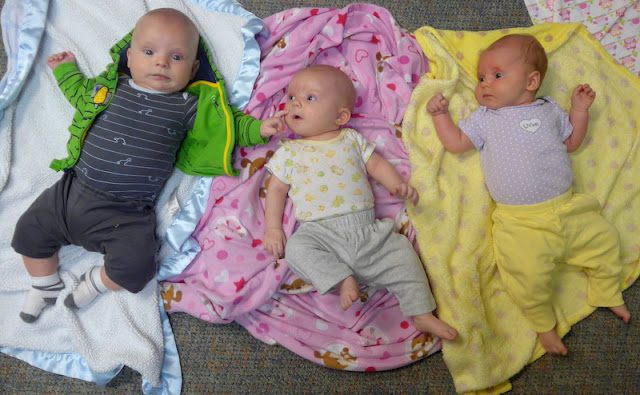 All three of them were squirming around, accidentally poking each other, kicking their chubby little legs, pumping their arms, cooing, hiccupping. It was too much. 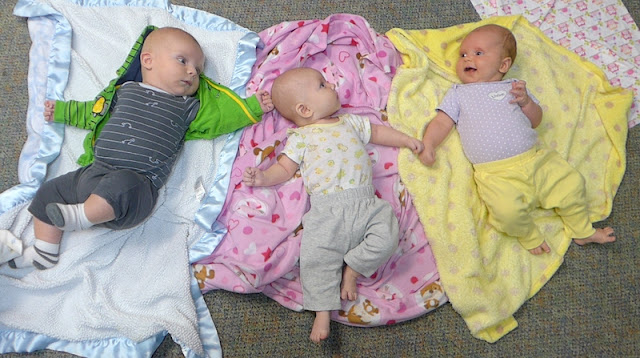 Benjamin was so excited to have three babies to play with. "Un, two, sree!" 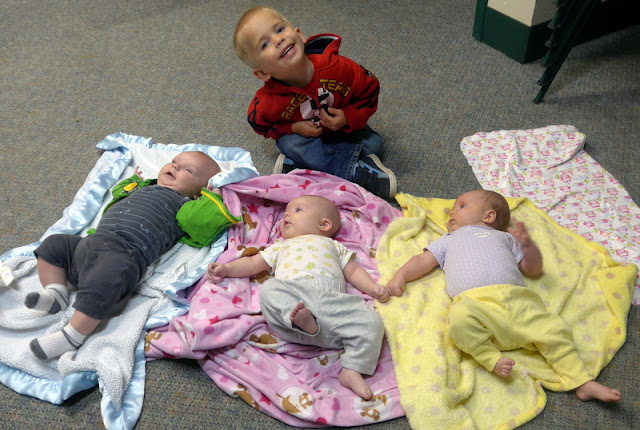 Gavin's a little less interested in the babies since he's still quite a baby, himself (he just started nursery this month (that means he's 18 months old)), which is kind of nice. The babies are safe from him; we were all panicking over Benjamin and all the "love" he has to offer these little babies (he almost stepped on Zoë as he was running across the room, for example, and everyone gasped and it was terrifying, but he missed her). 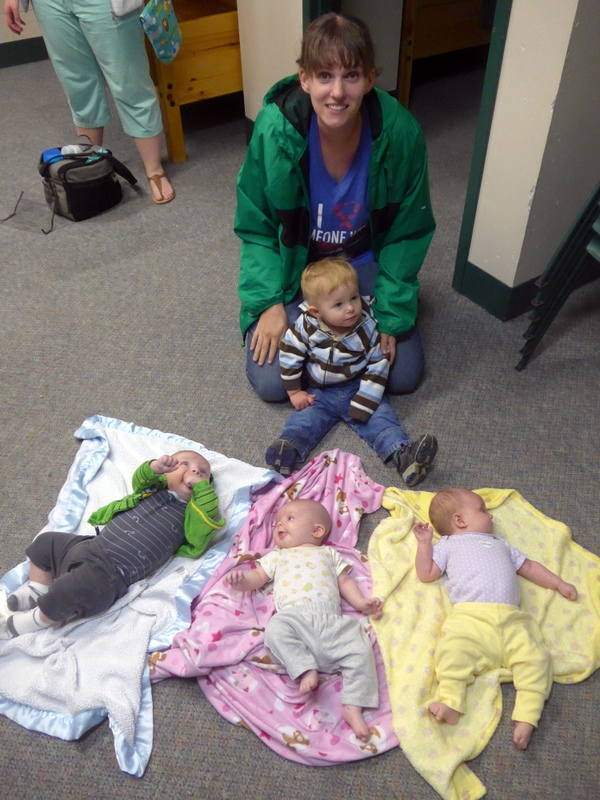 And here's a shot of everyone admiring those babies: 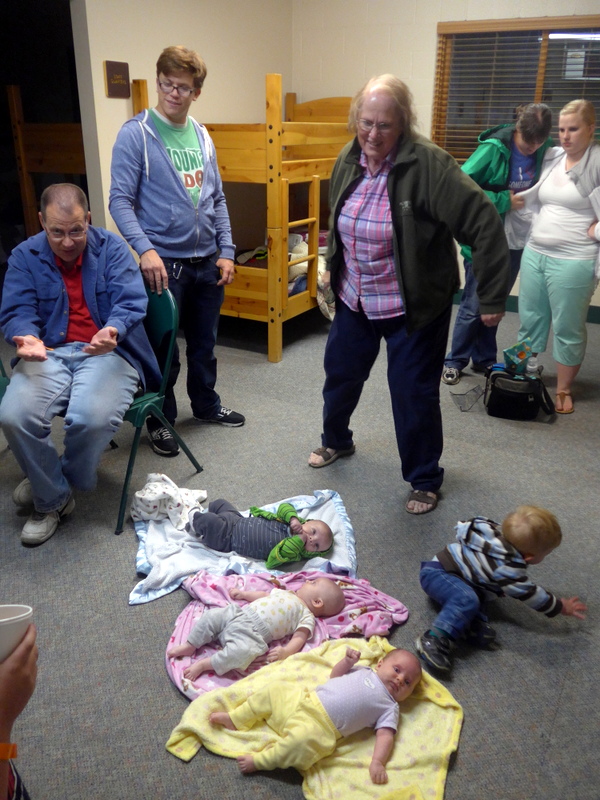 We shared a cabin with Auntie Sarah and Riley, and Uncle Jacob and Auntie Shayla. We'd brought some glow sticks for the kids to play with but forgot about them until it was well past their bedtime, but we were camping so we got them out anyway. We turned off the lights in the cabin (it was fancy camping, obviously) and let them run around wild with their glow sticks, hoping to burn off some energy before putting them to bed, after which the grown ups were planning on a game of hand-and-foot or something.

But while the kids were running around like hooligans in the dark, Jacob and Shayla went to bed. Shayla was asleep already, and so we dimmed the lights again and everyone just went to bed, which was probably just as well.
Posted by Nancy at 10:05 AM