In the morning of the fourth we went to Grandma and Grandpa's ward's pancake breakfast. The kids walked from the school to the church in a parade led by a police car (which totally made Benjamin's day). 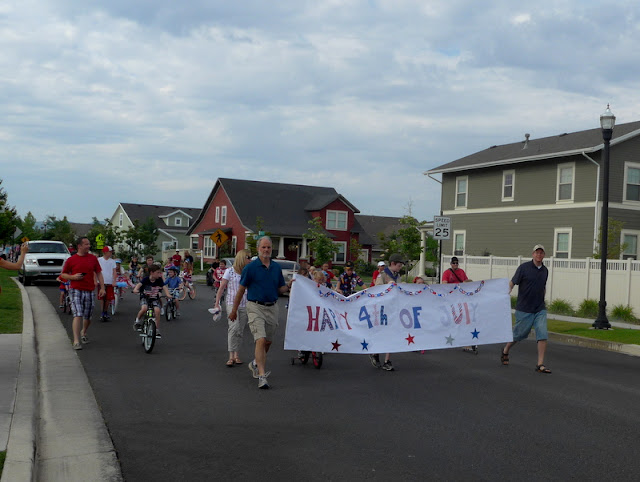 Andrew and I watched from the sidewalk and then joined in since our family was pretty much bringing up the rear. Most of the other kids had decorated their bikes (in red, white, and blue—go figure) but our bikes are in North Carolina so we walked. 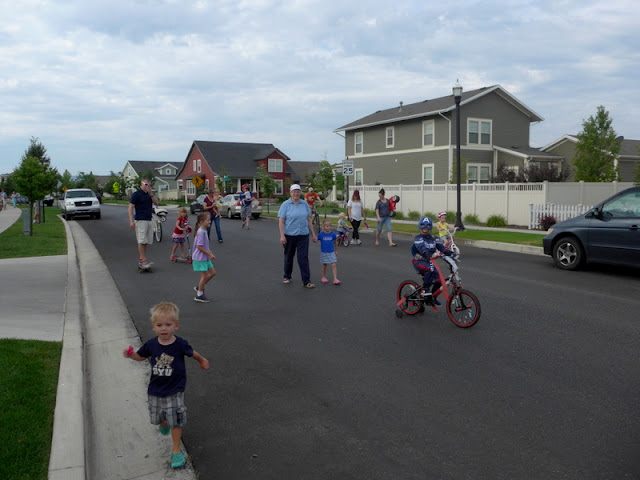 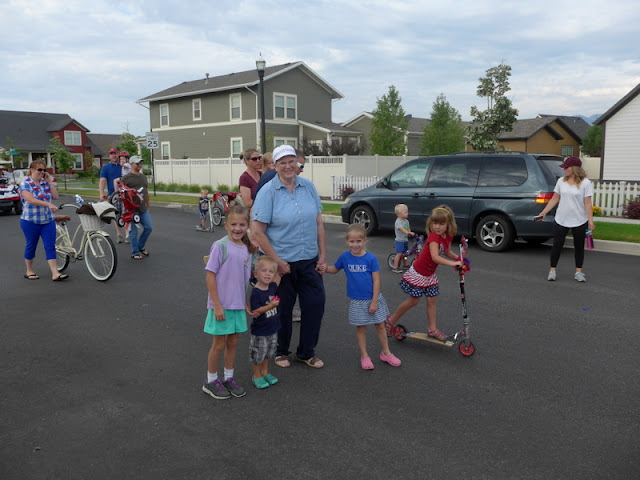 We had a little program and then ate pancakes and watermelon and all sorts of yummy things before playing at the playground where Daddy gave Zoë her first shoulder ride. 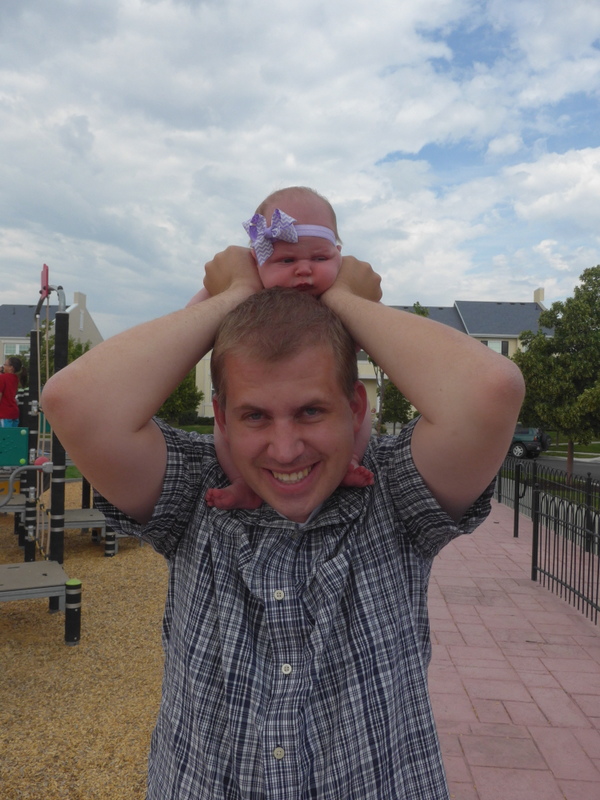 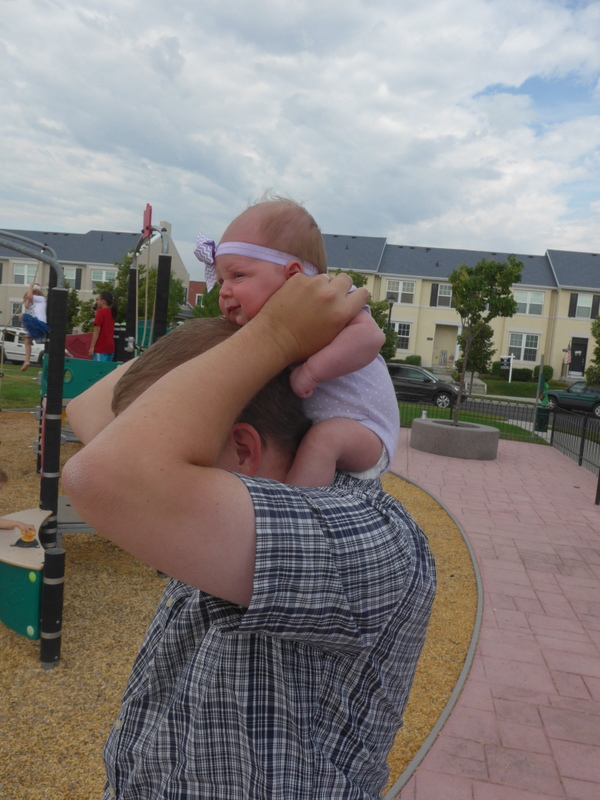 The rest of our day was pretty boring. We did a little bit of napping and a little bit of playing outside. I think we were still all so exhausted from the day before! In the evening the kids really wanted to watch fireworks so we made plans to go to West Jordan for their firework show, but then a storm blew in, and we were all still so tired that we decided not to go. The weather had cleared a bit in the evening though so we went over to the Oquirrh Mountain Temple (pronounced: Oaker), which is smack dab in the middle of Grandma and Grandpa's neighbourhood. 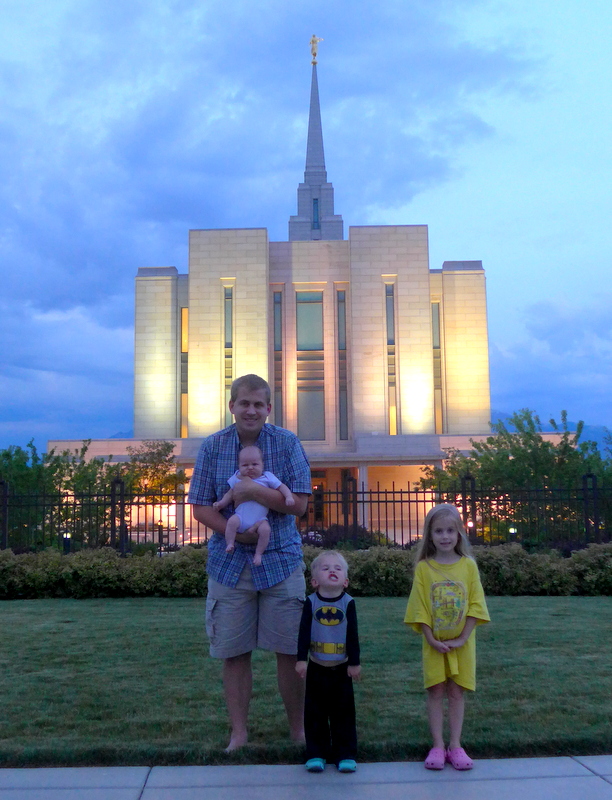 It's up on a hill and offers a lovely panoramic view of the Salt Lake Valley. It was rather magical to watch fireworks exploding across the entire valley. 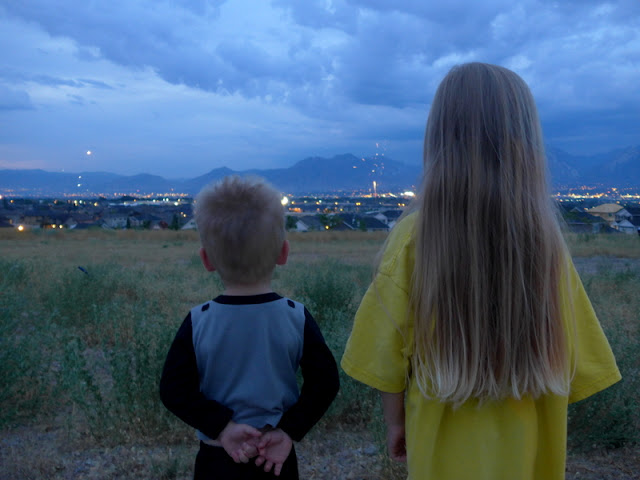 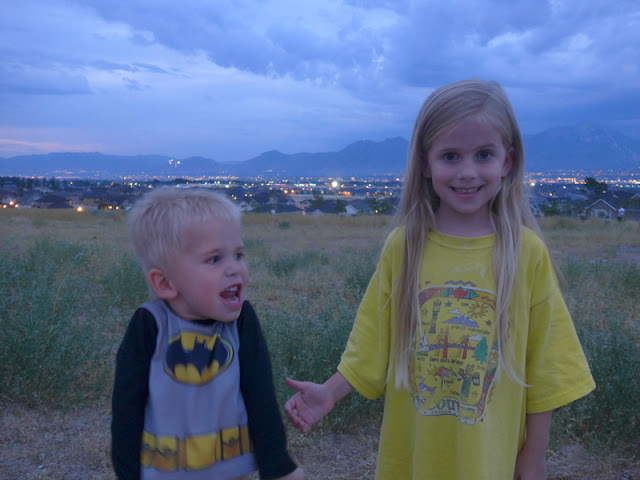 We were supposed to meet up with Grandpa and Rachel (they walked, we drove, Grandma stayed home baking treats for Riley's blessing day) but we never did find them (until we got home), so we watched fireworks all on our own. We were woefully unprepared for the experience and surrounding families took pity on us—such kind neighbours!

The neighbours to our left offered the kids a blanket to sit on, which was much more comfortable than sitting on the sidewalk. 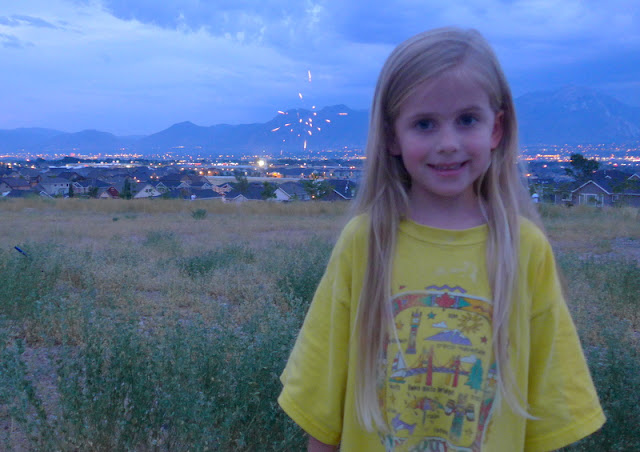 The neighbours to the right had a puppy, which Benjamin enjoyed petting, and later they opened a package of glow sticks, which Benjamin and Miriam immediately started pining after.

"Can we have a glow stick, Mom?" Miriam asked.

"Nope," I said. "I should have thought to pack some because I know I have a package in my closet at home, but I didn't think of it so I don't have any to give you."

"But I want one!" Benjamin said.

"Sorry," I said. "I don't have any. But at least we packed your swimming suits! You've had so much fun playing in the water at the splash pad and the lake. Wouldn't it have been silly if I had remembered to pack glow sticks and forgot your swimming suits?!"

The family with the glowsticks must have overheard us because soon their little boy came over and threw glowsticks to Miriam and Benjamin.

"You're supposed to say, 'Would you like one?' not just throw them," his mother chided.

I think he was about Benjamin's age.

The kids gladly accepted their charity, not caring that it was thrown at them rather than being politely offered. They had so much fun with them! 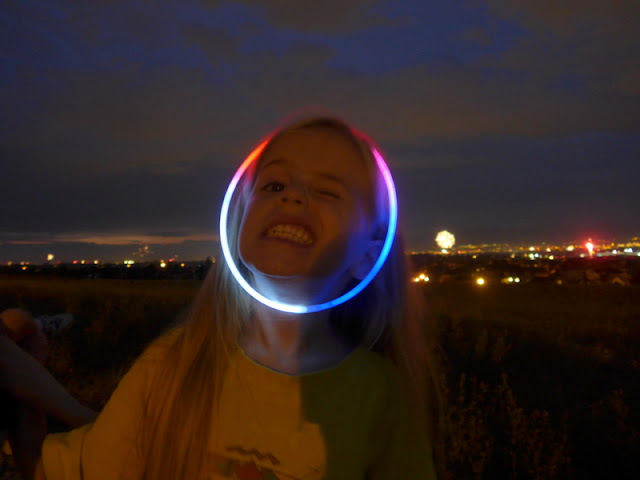 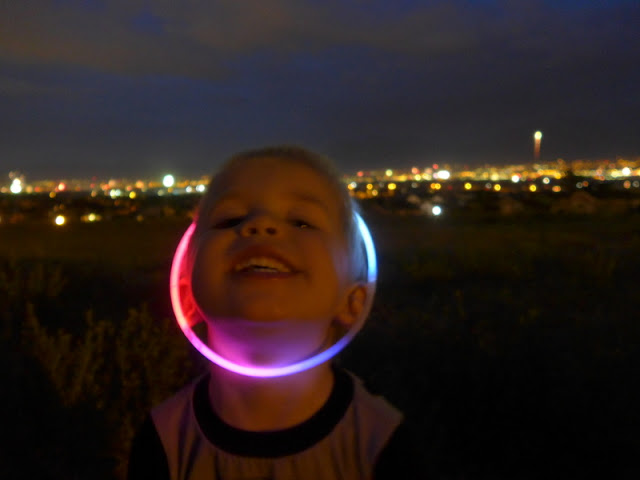 When it was time to go and I was packing up the diaper bag (with zero Fourth of July supplies inside) and Andrew was folding up the blanket to return to our neighbours on the left, Miriam and Benjamin tried to give the glowsticks back to the neighbours on the right (which was rather funny). They were overjoyed when they were told they could take them home with them and were very excited when we told them they could sleep with them.

Rachel, Miss Mature Almost-Eight-Year-Old, didn't even bat an eyelash when her siblings burst through the door waving their Fourth of July treasures in her face. She got excited for them but knew in her heart of hearts that she could be perfectly happy without one, a sure sign she's growing up (and growing up great).

Enjoy your fireworks for the next couple of days. I know Benjamin's been impressed; he does a mighty fine firework impression (making exploding noises while hopping all around the house). 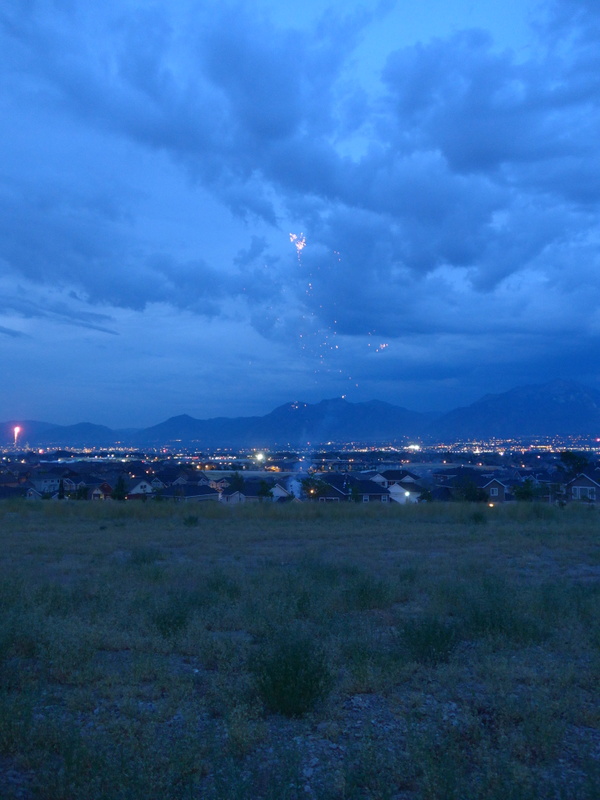