I woke up this morning (to little Miss Zoë's gruntings and groanings) and looked at the clock; it was 7:47 and the house was completely silent. Naturally, that threw me into a completely tizzy. The girls' bus comes at 8:00!

So we did, but the girls completely missed their bus. Andrew drove them to school because he's a nice daddy.

It's still a little strange to have just Benjamin and Zoë at home. It would feel quiet except that Benjamin talks all the time. Today I did some homeschool preschool with him just to keep him quiet and focused while Zoë napped (ie. so that she could nap).

"Let's do something that's not flipping off the arm of the couch during rest time, okay, buddy?"

The things I find myself saying...

His activity was lining up the numbers 1 to 9 in six different colours. It was a lot of work for him to find all those numbers and put them in order. When he was finished he built a tower with the leftover tiles. 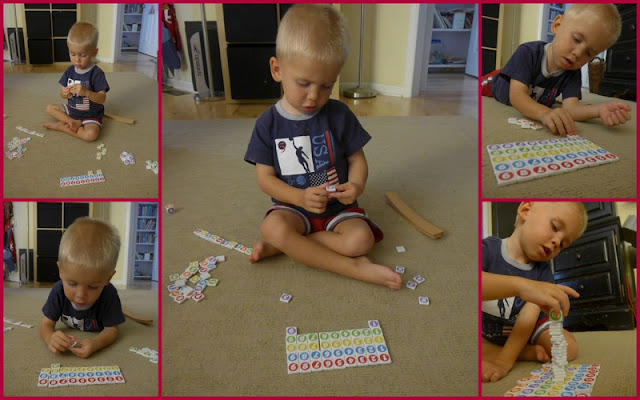 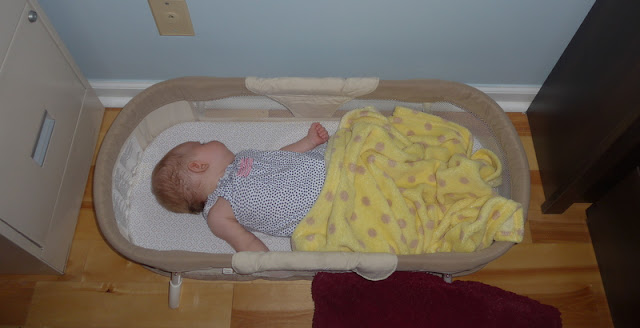 It fits just perfectly between our bed and the filing cabinet. I'm not sure what we'll do when she outgrows it.

After Zoë woke up she and Benjamin had some kicking time on her little play mat. They have so much fun playing "together," in Benjamin's opinion. I'm not sure Zoë shares that same sentiment. 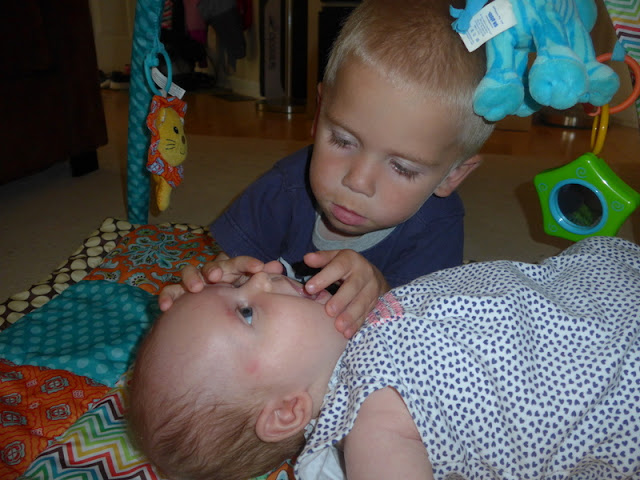 She doesn't seem to mind it too much though. 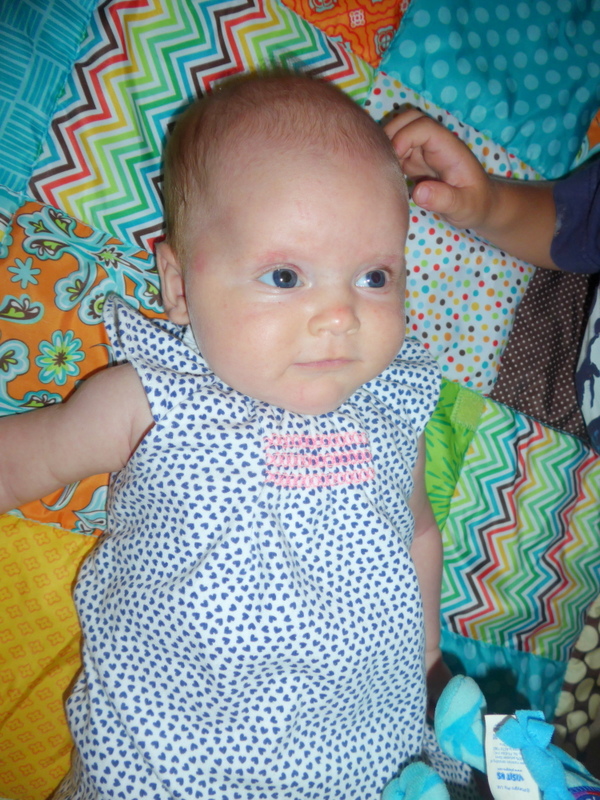 She even enjoys it when he shows her how her toys work because she's too small/young to manipulate any of them yet but thinks they're pretty fun to look at anyway.

Tummy time still isn't her favourite thing so we usually do that in bed, first thing in the morning (I just hold her on my chest, tummy to tummy). 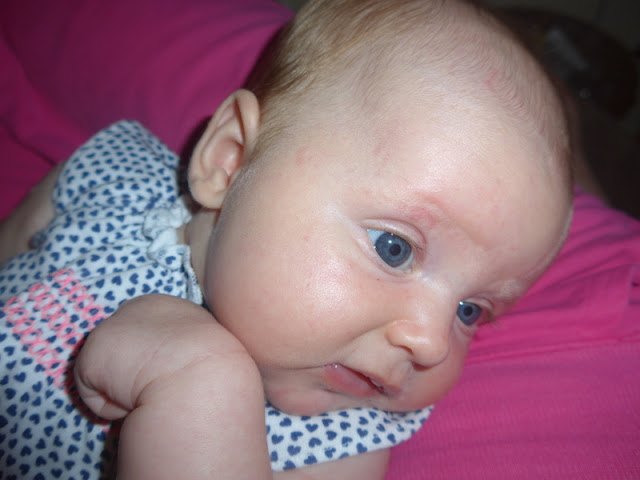 One of these days I might get brave enough to leave the house while the girls are at school. I remember it took a bit of adjusting before I felt alright about going out when Rachel started kindergarten and now I find myself feeling the same way—as if I'm somehow being unfair...or something...by taking Benjamin to the library/pool/museum without Miriam (I've long since stopped feeling guilty about doing things without Rachel). And I suppose it's not so much guilt as it is...loneliness? I just feel like I'm missing someone. And I kind of am, I guess, but we'll learn to live without her during the day.

Poor Daddy got stung by a wasp (twice) on his way home from campus today—once on the neck and once on his finger (because he grabbed the wasp from his neck...giving the wasp access to his hand). He was still nice enough to pick up some milk after I finished the last of it in the soup I made for dinner. And he played the piano for family night (but only the right hand).

We had a family night lesson on tithing because Grandma gave each of the kids five dollars (from her coin jar) before they left her house to come back to North Carolina and we figured it was a good time to learn about tithing.

I cut out circles from yellow paper and made a memory game. On the "back" I wrote either 5¢, 10¢, 25¢, or $1.00 (ignoring pennies because pennies should be discontinued like the were in Canada). On the other side I wrote down a set of questions and answers (in parentheses below) that we'd have to match.


I also included the free coins; if you flipped over one of those you would do the action on the card and then could keep it without having to make a match. I think that was the only way Benjamin earned any coins at all!

After we'd made all the matches we counted up how much money we'd each earned and then figured out how much tithing we'd owe on it. And then we got out our real money and counted out the tithing from the $5 Grandma gave each of the kids; we filled out tithing slips, and set the envelopes aside for Sunday.

It was a pretty successful FHE, though no one cried so I'm not sure if it really counts...

We put the kids to bed early after scriptures, prayer, and stories, so that they could have reading time before lights-out. Usually we let Rachel stay up until 9:00 but we've been having such a hard time getting up in the morning (remember how we slept through all our alarms and didn't wake up until 7:47?! (thank goodness for Zoë, my fail-safe alarm clock)) so I told all the kids they had until 8:30. Benjamin must have been really exhausted because when I went in to sing to him (at 8:30) he was fast asleep, hugging a couple of books that he hadn't managed to flip through yet. 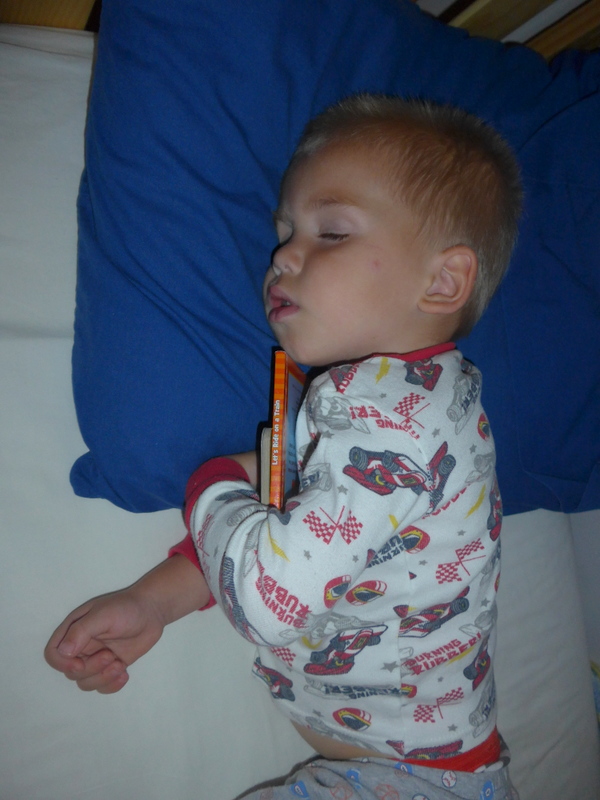 He'd gone through a lot of books before falling asleep! It'll be fun to (make him) clean that up in the morning... 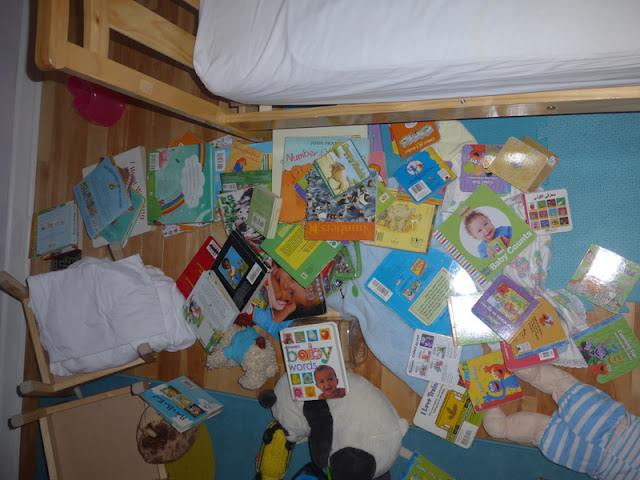 The girls didn't complain about having to go to bed either.

Eventually we'll get back into a school year groove again, right?
Posted by Nancy at 9:37 PM