When our finalized summer plans included a three-week stay in Utah, my mom started planning a family/friend gathering for us. It can be hard travelling around trying to see everybody (especially with a brand-new baby) so it was nice to get everyone all at once. People kept me so busy visiting that I didn't really get a chance to eat until we were starting to clean things up.

I felt like a bride at a wedding reception!

It was fun to get to see everybody though, even if I didn't get a lot of time with everyone I saw. I'll link to my mom's post about the evening as well because she took more pictures than I did!

Here's my sister Kelli with Zoë: 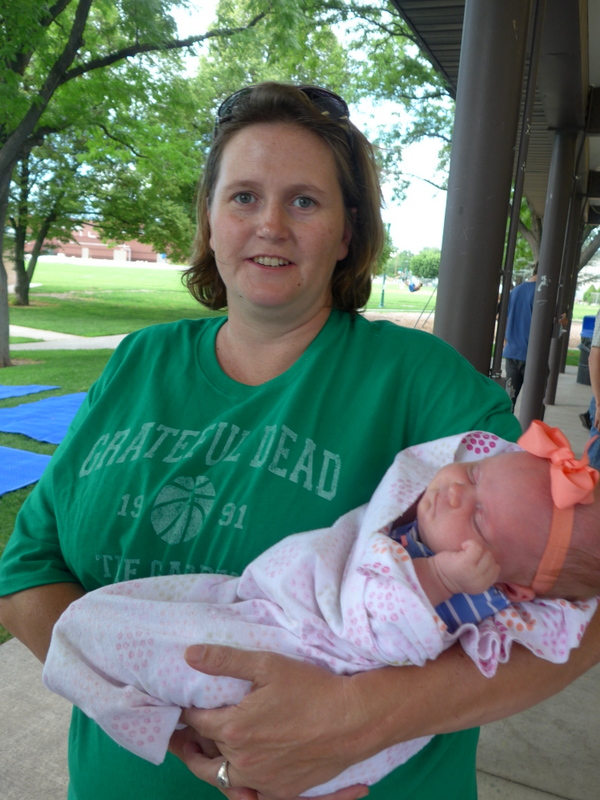 And here are my sister's boys, Andrew and Matthew: 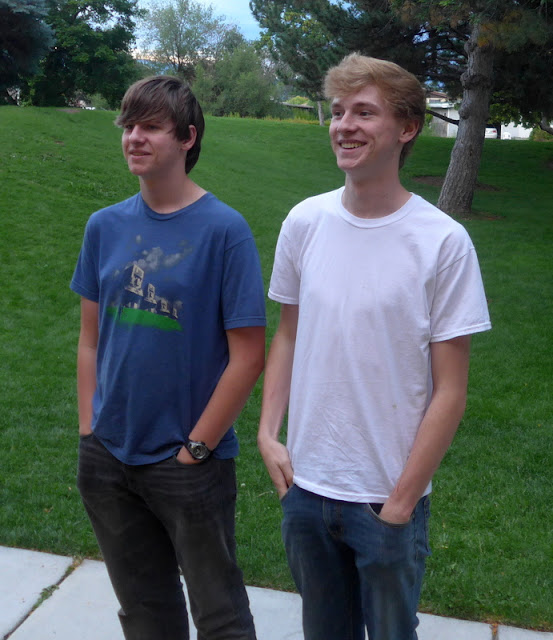 Ordinarily I feel pretty tall on my mom's side of the family (though we do have some tall people—Patrick, I'm looking at you) because I'm several inches taller than all my mom's sisters and many of my cousins and am about the same height as her brother.

My nephews, though, have the uncanny ability to make me feel rather short.

Jacob and Shayla stopped by, which was nice of them: 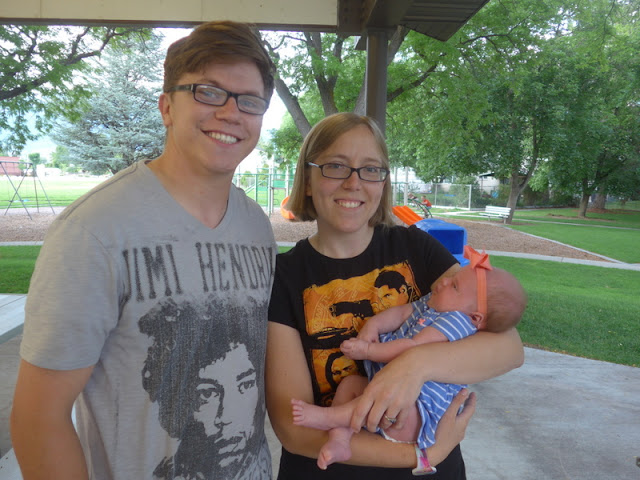 They keep posting pictures of the two of them holding various babies and people they know but no longer live close by see the pictures on Facebook and get all excited for them. When they got engaged, Facebook chose to stick a picture of the two of the snuggling a brand-new Benjamin, which got people really confused. Now that they've been married for a few years, though, people are a little more likely to jump to the conclusion that any baby they hold is theirs. For now, they're still just borrowing babies.

This picture made me laugh, too. That's my brother David with our niece Rosie holding Zoë. It's kind of strange for him to be in the dating pool still because Rosie's recently jumped into the same pool—she's in college now and is dating returned missionaries (men in their twenties). 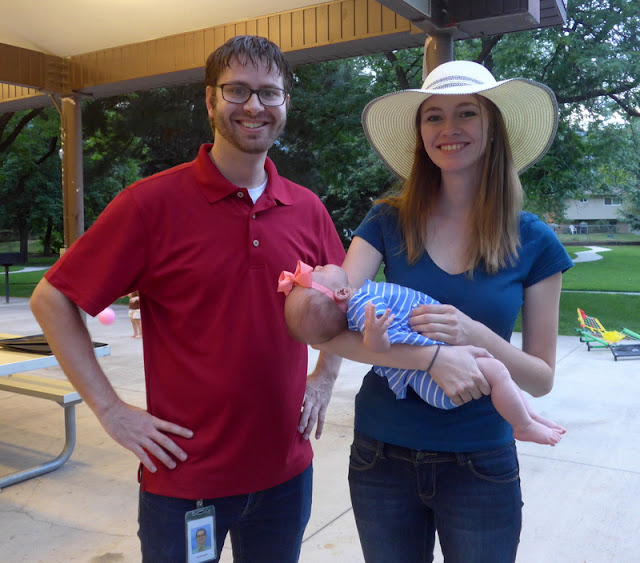 I was talking with my friend Geneen, whose baby, Elaina, is about two months older than Zoë (but about the same size) about breastfeeding. She told me I need to move in next door and give her all my extra milk because we keep having babies around the same time. She's tried to nurse all five of her kids but has always had to supplement with formula because she simply can't make enough milk. After a long talk with a lactation consultant the consultant finally declared that Geneen simply doesn't have the ductwork.


I had recently read an article called The Dangerous Game of Interval Feeding in which the lactation-consultant author says that interval feeding hampers the ability to produce enough milk for your baby (something I've thought for years; I'm certainly a feed-on-demand kind of mom (even though it does get tiring)). In the article she says:

We used to think most women had a pretty similar number of milk ducts but the ultrasound research revealed there were less than previously thought and the range was big. One woman had 4 ducts at the nipple. One had 18.

But it’s the findings about breast storage capacity that we need to talk about here. When a baby feeds, some milk is manufactured during the feed itself and some is taken from milk that has been stored in the breasts between feeds.

One mother was able to store about 2.6oz per breast.  Another woman stored more than 20oz. That's not a typo.

(I should note that the author points out that this is not a supply issue; rather a mom with fewer ducts and/or less storage capacity will simply need to feed her baby more frequently.)


I joked with Geneen that I was an 18 duct woman while she was a four duct woman because I can nurse Zoë to satisfaction and then pump off another four ounces of milk (and even then I choose to stop rather than running out of milk). But then I met my cousin Kathryn's baby who, at eight months old is 27 lbs (that's heavier than Benjamin, who is three years old)! Now she is an eighteen duct woman! I'm probably only a ten or eleven....

(I should note that I really have no clue how many ducts any of these ladies, including myself, have, though I do know that I can store a lot of milk). 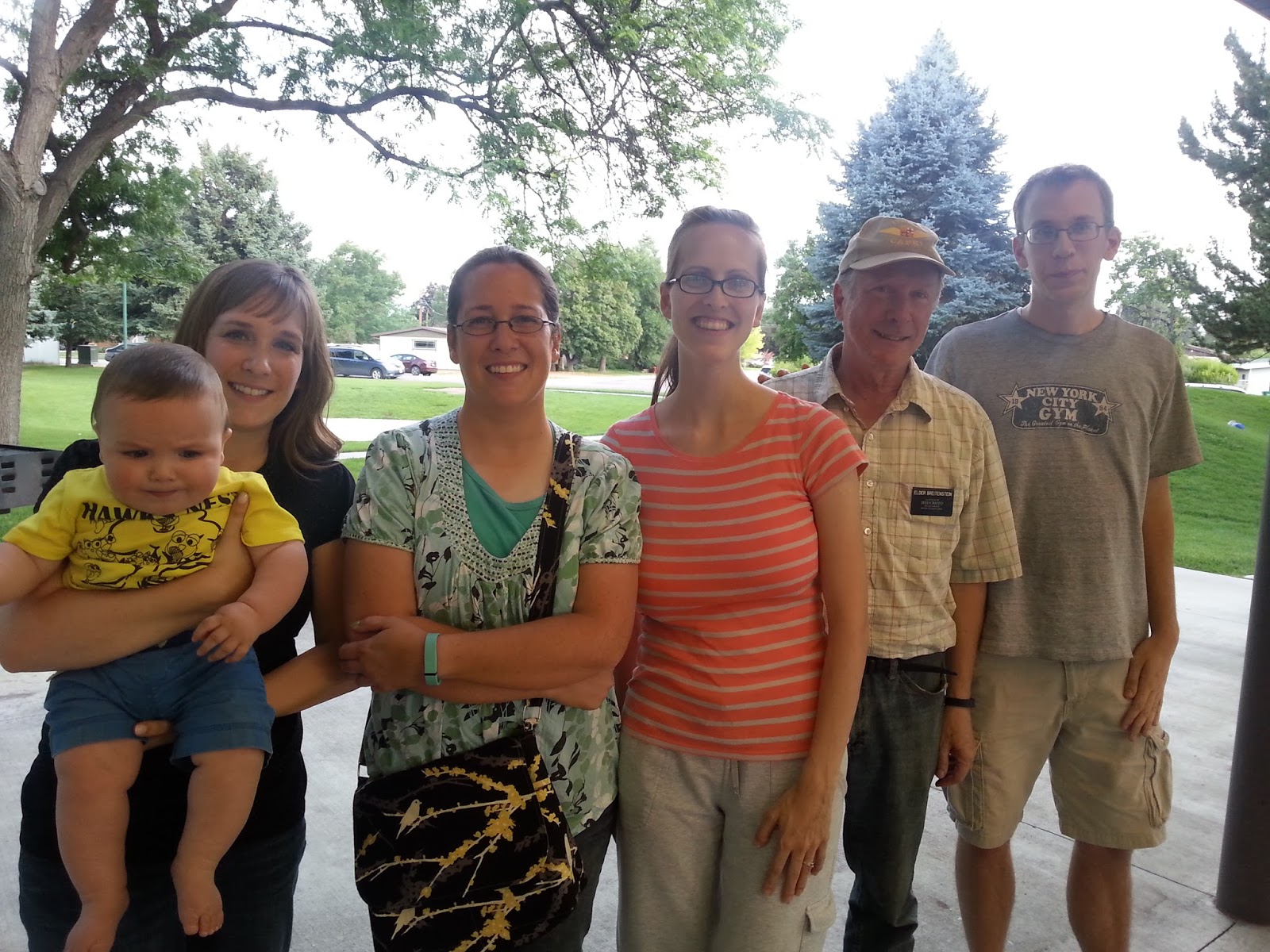 It was fun to see so many of my worlds collide. In this single picture are friends from three of my "worlds."

The Tessems, who we met in North Carolina, stopped by as well as several of my other very favourite families on the planet. That's kind of a cool thing about being Mormon—you'll always run into a friend or two in Utah, no matter where you're from!

At the end of the evening we tortured our children by taking so many pictures (it's a family thing). 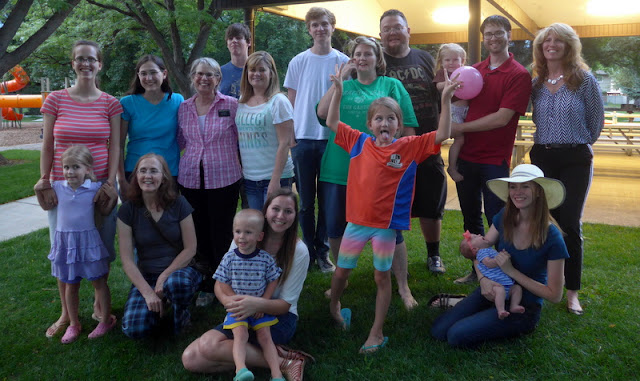 Here are all the second cousins (mine and my sister's children with my cousin's children) who were in attendance (there are way more than what's pictured): 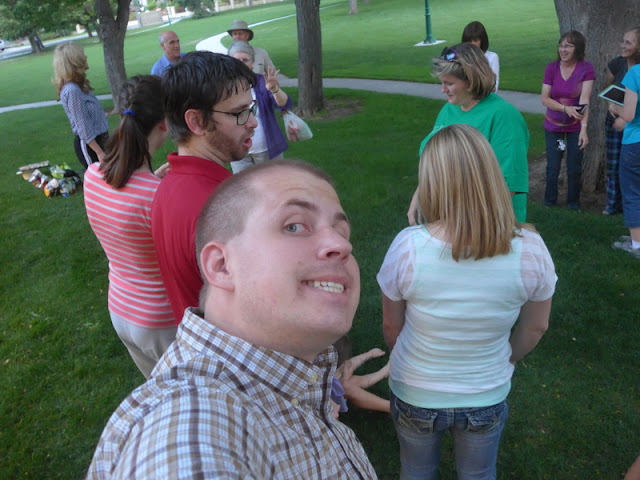 Here's Auntie Josie relaxing on the grass with Rachel and Benny: 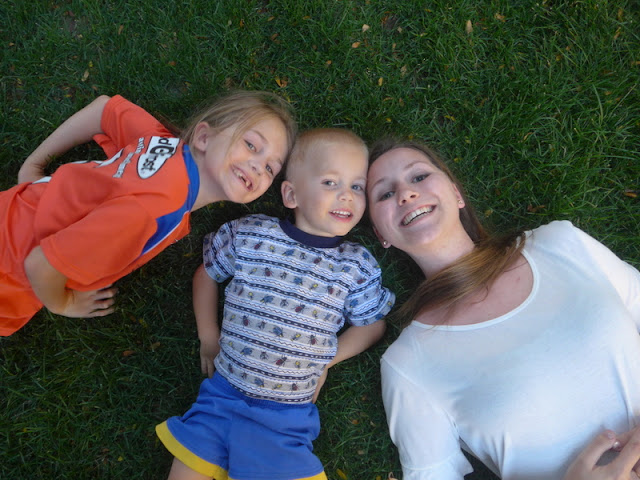 A huge storm rolled in at the end of the evening, with wind and thunder and lightning and rain, so we were hurrying to finish cleaning up before it hit us hard. I caught my Uncle Bruce snuggling his granddaughter, Bridget, and took a few pictures. 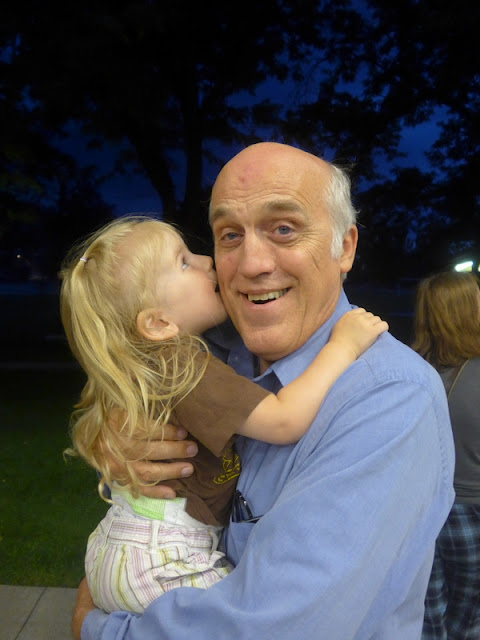 He started to sing to her a personalized version of the theme song New York, New York. 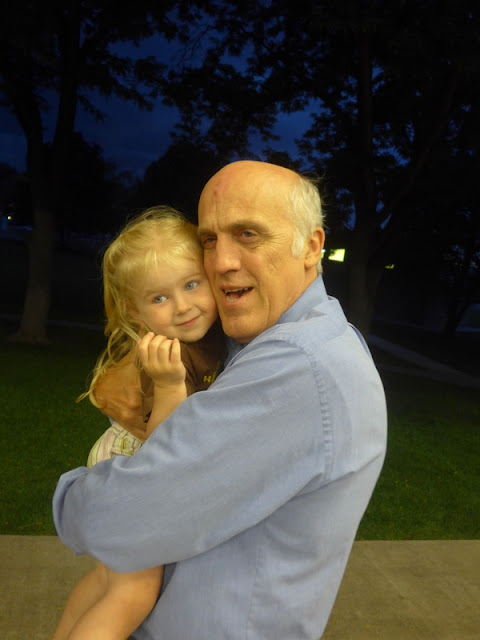 I believe it went something like this, "Start spreading the news. You're picking your nose..." because she was, in fact, picking her nose the whole time. Elizabeth kept trying to get her to stop so we could get a nice cheek-to-cheek picture but she wouldn't (isn't that like a two-year-old?). 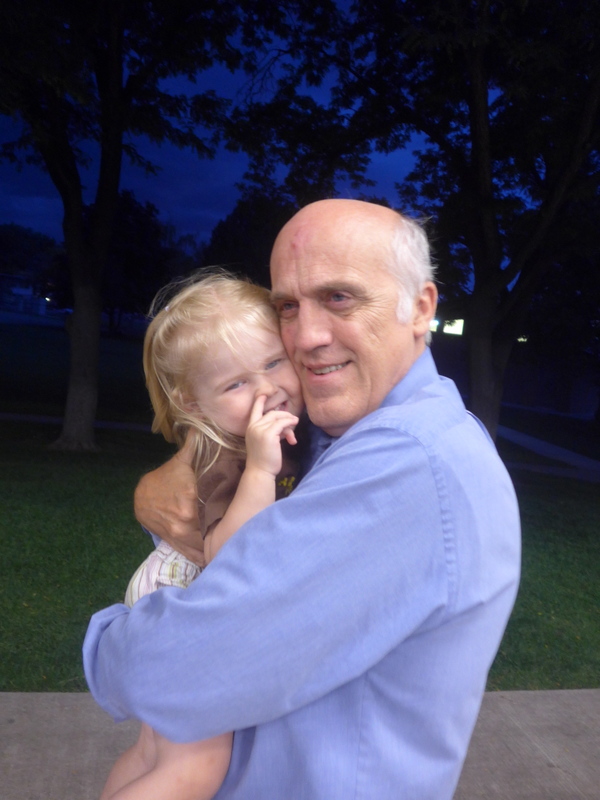 Benjamin gave Bridget a big hug before we left. He—and all the kids—have been so good at meeting and truly befriending their relatives. And then we make them say goodbye and it's hard. 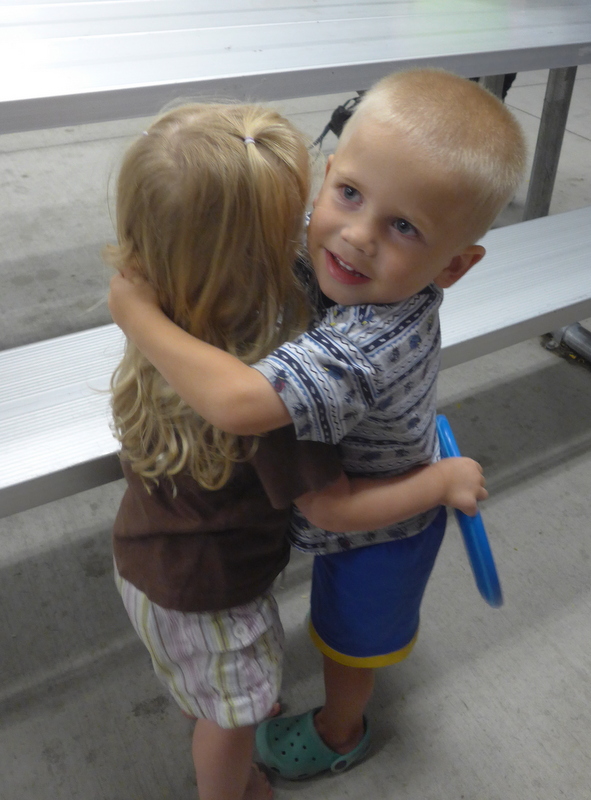 Oh, and then we had to drive back to Andrew's parents' house in that terrible storm, which was beautiful to watch but frightful to drive through. We made it home safely, obviously—good thing Andrew was driving!
Posted by Nancy at 5:49 PM