Here's a sneak peek of Benjamin's Halloween costume. I'm sure I'll be posting more pictures next week when we start going to Halloween parties left and right. Our neighbourhood party ended up being cancelled this year because the HOA party chair moved and no one has volunteered to take her position. I almost volunteered to do it but stopped myself just in time (I remembered that I don't actually like socializing, so...). But Tuesday we have Math-querade at the girls'  school (this night theriously crackth me up) and the ward Trunk-or-Treat is on Wednesday, Thursday is a girl's night out (we're watching Hocus Pocus, which we watched last night for a family movie night), and then we get Friday night off before we go out Halloweening on Saturday. Phew!

Anyway, here's Benjamin, dressed as an engineer (just half of his costume):

This picture sums up his personality perfectly, the little imp. He is so, so adorable, but at the same time he is infuriating. This child...I can't even.

He spent the whole day picking on Zoë. Every time I turned my back he was literally on top of her—sitting on her, jumping over her, lying on top of her, smashing her face into the floor, yanking her arms, sticking his fingers down his mouth, poking her eyes, twisting her fingers, throwing toys at her, flipping her over, stacking pillows on top of her.

He was driving me bonkers!

And then she was constantly screaming.

And it didn't seem to matter where I put her—he'd find a way to get to her. He has no shame and will even attack her while I'm holding her.

He's like a walking thesaurus, that kid, and if there's a loophole, he will find it and exploit it.

One day he'll grow up to be a lawyer or a politician or something and will make me real proud. But today he was driving me up the wall.

Finally I had enough and I sent him to his room for good. He was devastated, but in all honesty his room's a pretty great place to be. He's got his bed and his books and his toys and a TARDIS replica. It's not like he's hard done by, but he carried on as if I'd banished him to Siberia.

Meanwhile, I took Miriam and Zoë outside to play in the leaves and take pictures of Miriam in her Snow White dress.

Benjamin glared at us through his window: 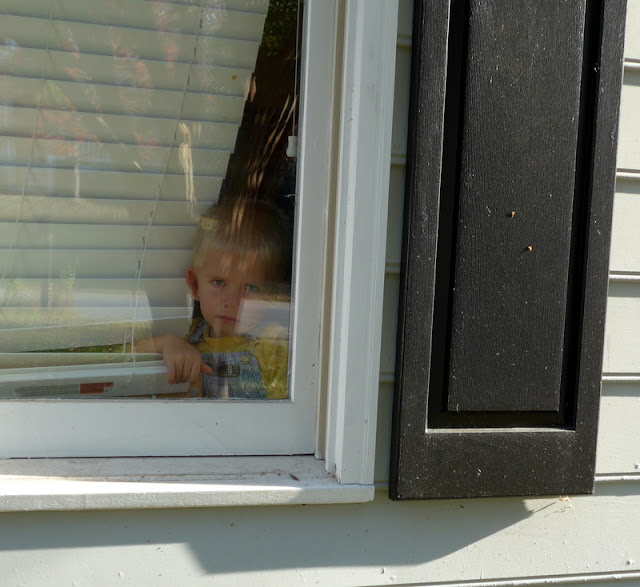 Eventually he calmed down and started smashing his face against the glass to make us laugh: 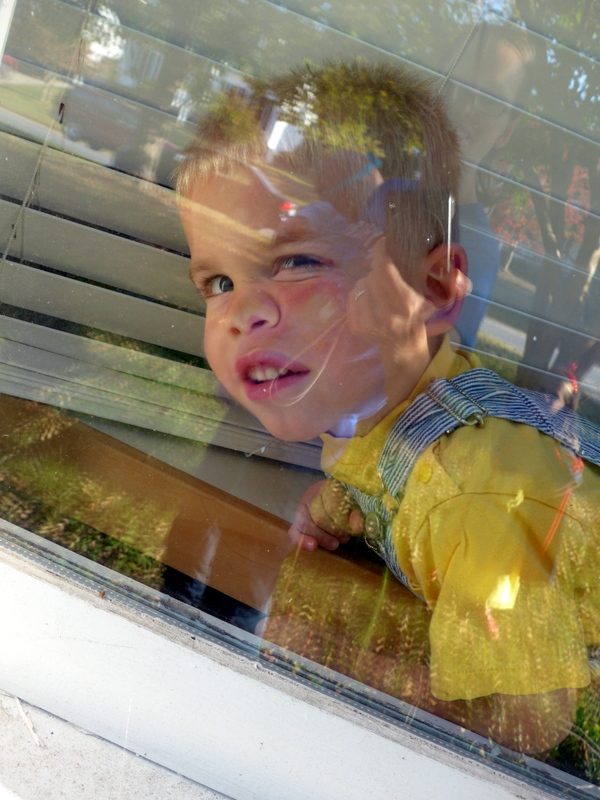 I still didn't let him out of his room until Daddy came home (which was probably about as much for his benefit as it was for mine (and it also wasn't that long of a time)).

There's hardly a day when this boy leave have my sanity teetering on the edge of a cliff. I don't know what I'm going to do with him, exactly. Get him an LSAT prep book, I suppose...
Posted by Nancy at 10:48 PM