On Friday night we took Rachel and Miriam to BYU to see Renée Elise Goldsberry in concert. She played the original Angelica in Hamilton, so to say they were excited about this would be a bit of an understatement. We weren't the only ones: the concert sold out within a couple of days—every single seat was taken.

We got to campus a little bit early so that we could check out the library. We haven't yet gotten library cards for our public library and we weren't terribly impressed with its looks as we drove by it; it's tiny. But, we have access to the HBLL at BYU, which has a large children's collection.

"How big, though?" Andrew wanted to know.

Apparently he hadn't spent a lot of time in the children's collection as an undergrad (or graduate student). Go figure.

I, however, had rifled through the children's collection on several occasions. My mom started working at the BYU library when I was in high school, but Josie was still in elementary school so we were still checking out loads of children's books. I also worked in receiving and unboxed/processed pretty much all the incoming picture books for the library (in addition to other books, but I liked processing picture books because...I still like reading picture books and this was as good of an excuse as any).

The girls picked out some novels to read but we didn't get any picture books because we hadn't brought our library bags. And we've been going through our collection at home, which is a good thing to do as well.

There was a display on old medical books (pulled from Special Collections, no doubt (I also used to work there!)) and they had a plague doctor costume you could try on. Kind of creepy...


Oh, we also checked out the new Family Study Room in the library, which is amazing! It has a couple of glass-walled group study rooms so that you can have a bit of quiet while you're also able to keep an eye on your brood, which is probably enjoying the climbing structure, reading nook, doll houses, engineering tasks, and so forth set up around the room. There are also study areas out in the open, a gated baby area, a "public" breastfeeding lounge, a private breastfeeding lounge, and bathrooms equipped with big and small toilets. We were really impressed. Almost makes me want to go back to school.

Once we were finished touring the library (running out of time, unfortunately, to see the Brett Helquist exhibit downstairs (he was the illustrator for the Series of Unfortunate Events), so we'll have to go back before the end of September), it was time to head over to the concert.

The atmosphere was a little electric; everyone there was super excited for the concert (except, perhaps, the elderly couple who sat beside me; they'd come with their granddaughter and in the middle of the concert her grandpa got up and left, so there was probably one empty chair in the whole concert hall: the one beside me). The DeJong concert hall seats 1,268! 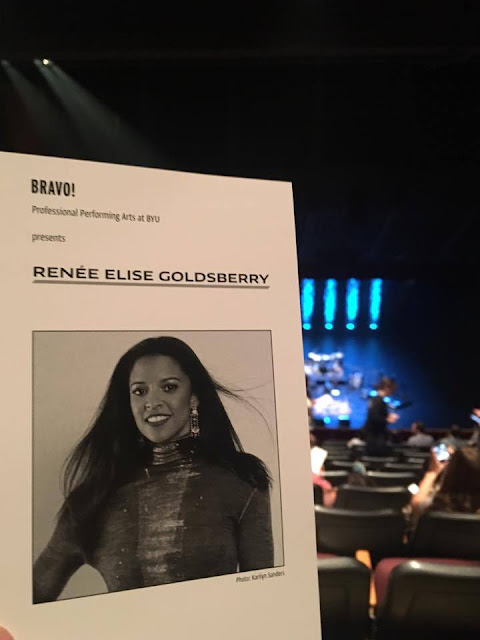 Here are the girls and I waiting for the concert: 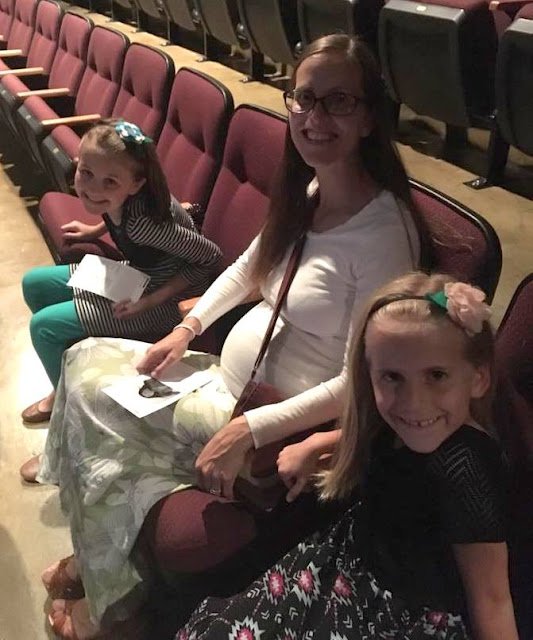 Soon she broke into broadway songs, singing from The Lion King, Rent, and, of course, Hamilton.

The crowd went wild whenever she'd say anything related to Hamilton, which was fun.

Then last night, Andrew and I went to a reading of a couple of books that BCC (By Common Consent) recently published. Andrew does the typesetting for them, so he felt like he should go and meet all the people he's been working with online.

The first reading was from The Book of Laman, by Mette Harrison. Admittedly, I haven't read it yet (though we have a copy...somewhere). Before reading a selection from it, Mette spoke about why she felt compelled to write a book from Laman's perspective. She wanted to ponder why Laman (and Lemuel) had such a different relationship with their father, Lehi, as well as with their Heavenly Father. She wrote it after a huge trial in her life (her sixth baby was stillborn) and subsequent faith crisis. Though she continued to attend church with her family, she felt like she was in a spiritual wasteland; she described herself as an atheist. She simply could not believe.

Then one day she decided she needed to try praying again. So she prayed the only prayer that she could muster: "I don't believe in you." She prayed this over and over and over again, and over time her prayers started getting longer and started taking on more the form of, "help thou mine unbelief," and she felt that God loved her despite everything and though it took her several more years, she eventually made her way back to a spiritual garden—she found her faith.

Next up was a play written by one of Patrick's friends, Melissa Leilani Larson, called Pilot Program, imagining the modern reinstatement of polygamy. The actors who read the parts were so good! Even though there were no props or scenery, it was very well played out. (One of Patrick's friends read the stage directions; she's sitting on the far right in the green and I can't remember her name (sorry friend)). 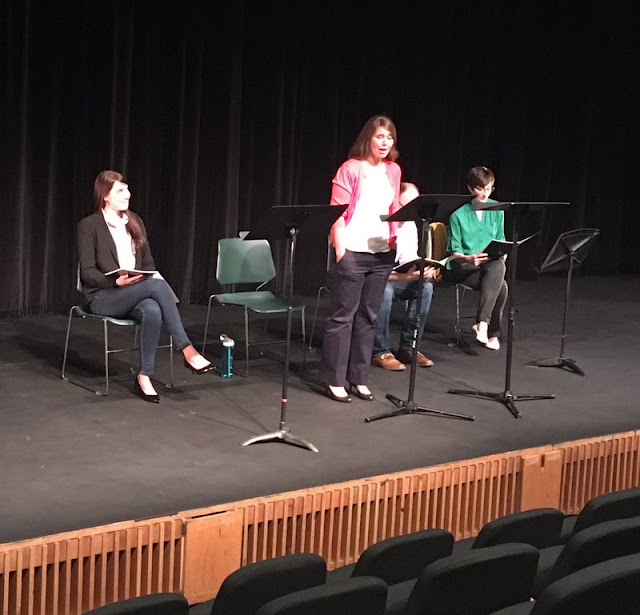 It is a very interesting play (so go read it) and it was fun to see it being "performed."

This morning we had a huge regional conference—256 stakes mostly from southern Utah (with a few from Nevada and Arizona)! It was held at the Marriott Center at BYU and was broadcast to local chapels, which is where we went.

The kids were a little crazy (it's always hard to sit still in the dark while listening to people on a screen for longer than you're used to sitting for sacrament meeting) but I noticed that in spite of running my little circus I was able to pay attention to snippets here and there. That decade of mothering must be worth something because I'm not sure that I would have been able to do that (pay attention while juggling children) even five years ago. Of course, it might have helped that I have older children and grandparents around to help keep the little ones in line.

Our first speaker was Elder Carl B. Hook of the seventy. He went through several verses of "Follow the Prophet," which seemed to hold the children's attention for a bit (I always appreciate when speakers do things like that) and then bore testimony on those ancient prophets: Noah and Enoch and so on. Then he spoke about President Monson, and how he's a prophet today. He even wrote a little verse about President Monson (which I didn't manage to memorize) and how he urged us to read the Book of Mormon.

Our second speaker was Sister Cristina B. Franco, of the primary general presidency. She spoke on cheerfulness and how expressing gratitude can help us feel cheerful. She probably said other things as well. But, sometimes a nugget is all you get when you're wrangling toddlers.

Next was Elder Juan A. Uceda and I thought his talk was wonderful. He talked about being lukewarm—but more on the fact that there is hope to go from lukewarm to boiling hot than just being good for nothing but to be spewed out. His talk made me think about Mette Harrison's book reading yesterday.

Our family has been memorizing scriptures from the Doctrine and Covenants this year. It's going...okay. For some reason these scriptures have been harder for me to memorize, especially along with their references (I think I have a mild case of dyscalculia, seriously (my sister does for sure), and keeping all those numbers straight is nearly impossible for me), but Elder Uceda quoted D&C 10:5, which is one that we've memorized, and it really touched me, especially in the context of Mette Harrison's experience:

Even when you're lukewarm, doing the small and simple things, such as praying, will help you come off conqueror. Even if your prayer is one sentence expressing hurt and mistrust, that one prayer can set you on a path toward help and healing.

Our last speaker was Elder Gary E. Stevenson of the Quorum of the Twelve Apostles. The first part of his talk was both interesting and abysmally boring: he talked a bit about the history of the region (the iron mission and the cotton mission and so forth) and how far the region reaches. I really didn't know whether to be riveted or to start snoring. But then he started in on his actual talk, which I got to hear the end of because Andrew dragged Zoë out of the meeting, screaming about snacks.

He spoke about developing Christlike attributes, focusing on humility, obedience, and virtue. He said on the freeway there is sometimes an HOV lane, which stands for "high occupancy vehicle," where traffic seems to move smoother, the route is more direct, and there is less risk. He said that as he was thinking about the attributes of Christ, HOV stood out to him and that as we merge into the HOV lane and live a life of humility, obedience, and virtue—with the companionship of the Holy Ghost—that our life will be smoother, more direct, and there will be less risk as we navigate the sometimes treacherous highways of life (he didn't say this, but I think it's important to note that storms will still arise, even in the HOV lane (that was something that Renée Goldsberry said at her concert; there are three states of being in this life: we're either coming out of a storm, in the middle of a storm, or have another storm approaching, so we've got to learn how to weather the storms of life)).

He cautioned us to be careful with the "wonderful and positive" things we obtain as we develop Christlike attributes, and seek out an education, and work hard and obtain wealth or whatever we do, that we need to remain wonderful and positive and not let pride take over our lives (because then we would be kicked out of the HOV lane, wouldn't we?).

He ended with some beautiful words by President Hunter o how to live a Christlike life:


...Mend a quarrel. Seek out a forgotten friend. Dismiss suspicion and replace it with trust. Write a letter. Give a soft answer. Encourage youth. Manifest your loyalty in word and deed. Keep a promise. Forgo a grudge. Forgive an enemy. Apologize. Try to understand. Examine your demands on others. Think first of someone else. Be kind. Be gentle. Laugh a little more. Express your gratitude. Welcome a stranger. Gladden the heart of a child. Take pleasure in the beauty and wonder of the earth. Speak your love and then speak it again.

Basically, what I'm saying is...it was a pretty great weekend, overall.
Posted by Nancy at 5:36 PM