Living here: Libraries and other tales

Sometimes I still have to remind myself that we live here now. Like, for realsies. It's not an extended vacation or visit. We're not going back. That chapter of our life is over. We're here now.

Sometimes that's a good thing. Like when my niece calls to see if she can drop by to play with my kids, or when the mountains are glowing majestically in the morning sunshine, or when my doctor doesn't say anything about my temple garments because, well, he's Mormon, too.

And then I just kind of smile and think to myself, "This is nice."

Sometimes, however, it's less nice. Like when our friends in North Carolina are on fall break and are all heading to the beach because it's still warm enough to do that and we (a) don't have any fall break to speak of and (b) are entirely unacclimatized to this weather (why so cold?!); or when we go to church and I look around at all the homogeny and realize that no one is going to be belting baptist hymns as they walk down the aisle to bear their testimony this week...or any week; or when we visit the library for the first time and realize (a) how small it is, (b) that it is an independent library, not a branch with loaning privileges at other branches, and (c) we are on "probation" for a few months and can have only ten items (ten items!!) checked out at any given time per family (not per card—per family).

And then I almost want to start crying and think to myself, "We live here now?"

Yeah, the library was kind of a big one for me this week. I literally almost cried when they said we could check out ten whole items. Like, ten? How do I fuel my family of readers for more than...a day...with only ten books? Gulp.


I suppose that's better than the Cairo library (what was it even called?!—that little hole-in-the-wall expat library...) where we were allowed to check out two books. But, I mean, that was understandable because the library was tiny and developing the collection was admittedly quite a lot of work.

I swear Sister Wood's home library has about the same number of books as the children's floor of our library here. Not even joking.

We got our cards. And I told Rachel and Miriam that because we'd checked out some books for them at BYU we were going to focus on bedtime stories (read: picture books) for Benjamin and Zoë. So we picked out ten books. Want to know the last time we escaped a library with fewer than 50 books (barring Cairo, of course)? Yeah, like, never.

With some deep breathing we got through it. And then I turned the kids loose on the city park where they found some friends from school who moved into our neighbourhood around the same time—from Kansas—because their dad just got a job at BYU. So that was a golden lining to our otherwise bummer of a library trip (ten items, guys).

But we resolved to take the kids to the BYU library this weekend so we could let them go hog wild. They haven't gotten to do that in ages. So that was our Saturday morning/early afternoon plan.

First, however, we made a stop at the Bean Museum. Benjamin has been missing the Museum of Life and Science (not that it was our second home or anything (it was totally our second home)) so he was quite happy to be running around and looking at dead animals.

Zoë was less than thrilled. 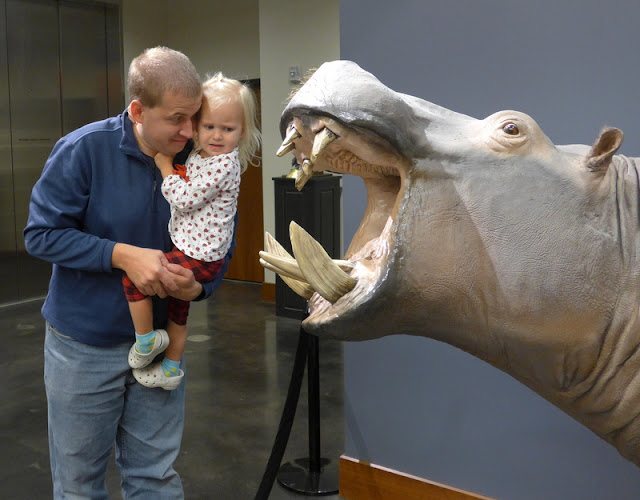 She was terrified of everything and Andrew thought it was hilarious so he kept taking her close to animals that had been posed with their mouths wide open. She screamed at everything until we got to this fierce looking tiger: 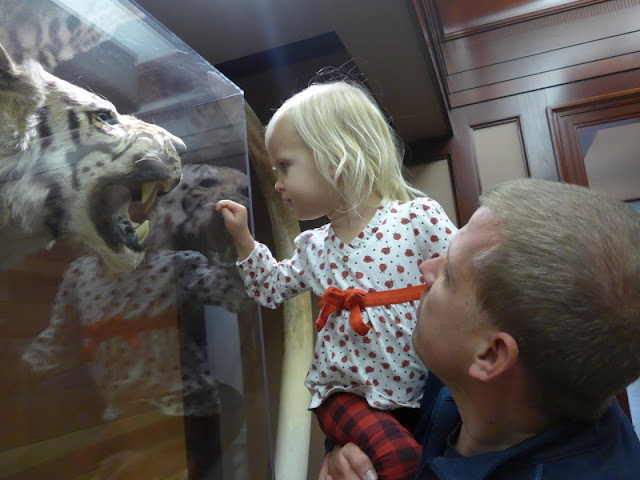 "You're not afraid of this one?" Andrew asked her.

"You're okay because he's stuck in there?"

Here's Miriam posing by an elephant: 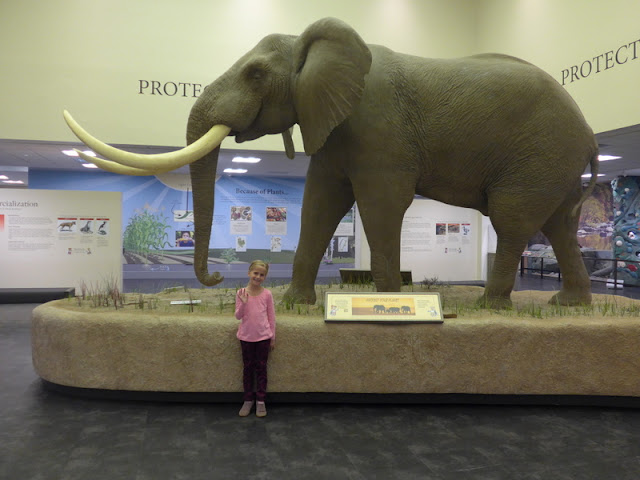 And here's Rachel with a...baboon? 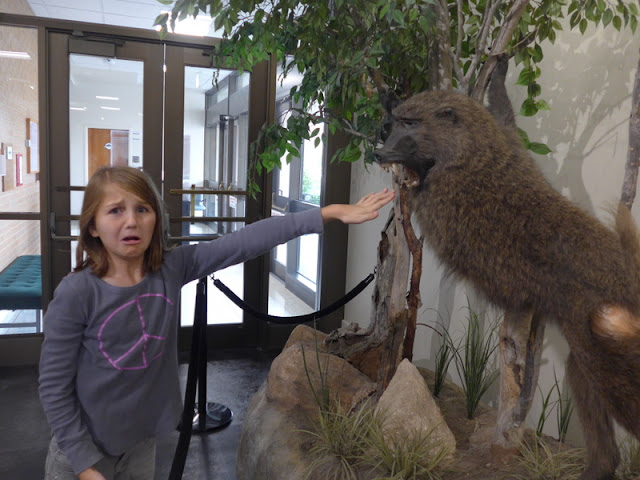 And trying to avoid a lion hunt: 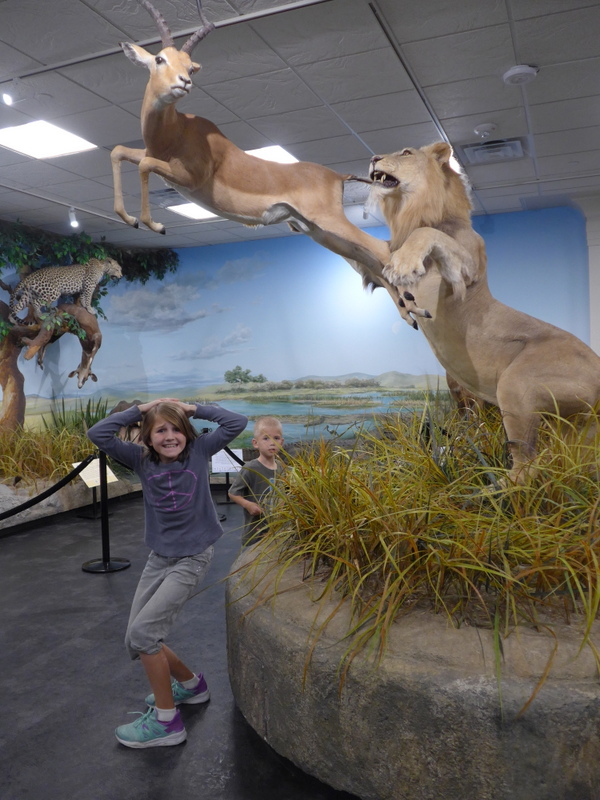 We made it through the museum much faster than I remember making it through in the past, perhaps because we weren't visiting with anyone (though we did run into someone from Andrew's mission), which has been our primary motivation for visiting the museum in the past. When we made it to the second floor the kids saw a little nook with some leather chairs in it and quickly (and rather excitedly) went to sit in them. That alone was rather humorous. Even Zoë pointed them out with the same enthusiasm she'd been pointing out everything else. "Oooh! Zebras! Oooh! Chairs! Chairs!"

"I wonder what animal they're made out of," I remarked casually just as Rachel and Miriam sat down. "There's no sign..."

"Ew! Gross!" they shrieked, jumping off of the chairs. 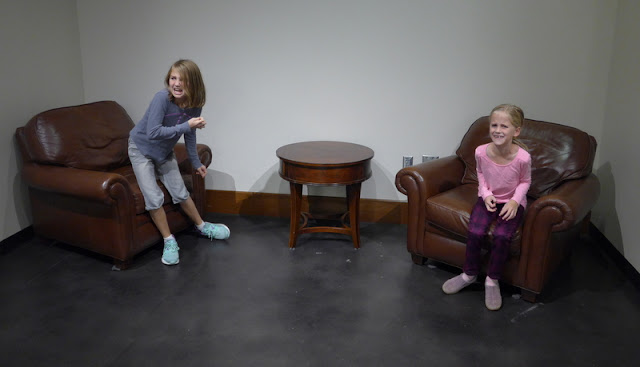 Andrew and I just about died laughing.

Our next stop was the library. The girls wanted to go on a tour of the PIVA room (since they had heard so much about it at the concert on Friday evening), so we knew we had to hang out until at least 1:00 but we were a little bit early so we hit up the Brett Helquist exhibit down in Special Collections (where I used to work), as well as the Bazaar exhibit (because it was also there). 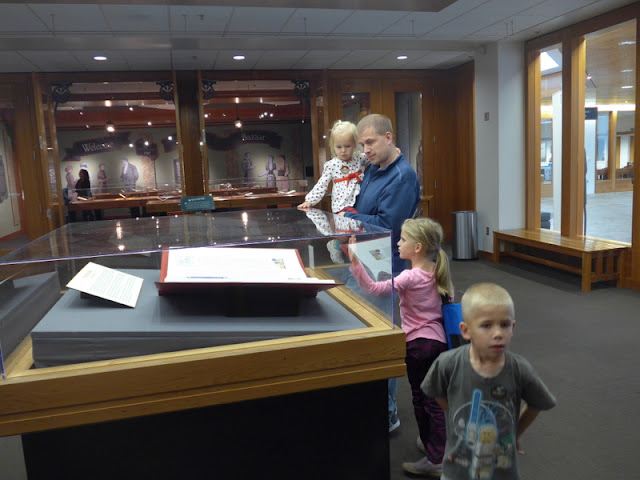 And here's Benjamin looking at a book for Alexander's brother (or, you know, close enough): 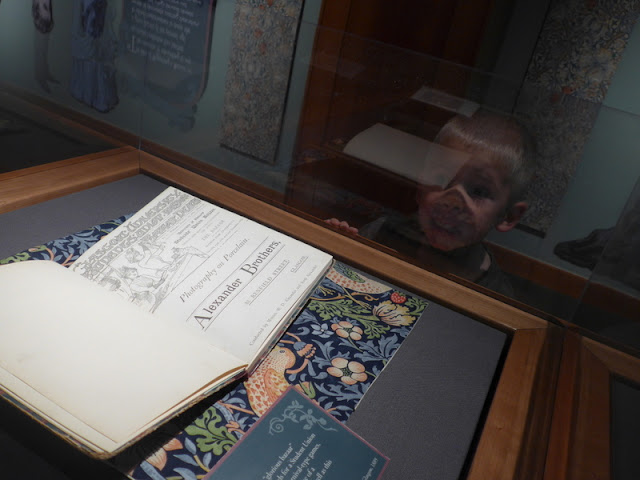 We also went through the Curious Remedies exhibit since Benjamin, Andrew, and Zoë hadn't seen it yet (Rachel, Miriam, and I went through when we went to Renée Elise Goldsberry's concert). Here's Andrew ready to banish the plague from a household: 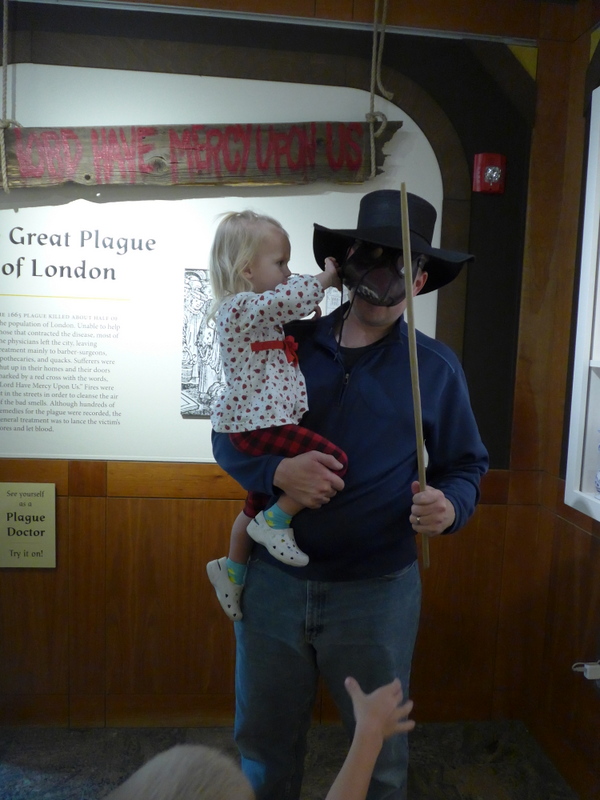 And here's Benjamin trying on just the hat (he didn't want to try on the mask (nor did Zoë)): Then we went upstairs and picked out a bunch of books before heading to the Music and Dance library so we could see Naanii (who was working on Saturday because of all the de Veritch excitement this weekend) and get a tour of the PIVA room.

The rest of our day was quite busy as well but the kids were excited for some new stories before bed. Benjamin has been working so diligently at reading lessons and has progressed in leaps and bounds. We weren't able to fit in a formal reading lesson today (though we've been pretty consistent the rest of the month, doing several lessons every day—he's already in the sixties (out of one hundred lessons)) but I did have him help me read a bit of every story. He can read...but he still doesn't think he can read, if that makes sense.

So often it's like he's playing a game of MadGab and he'll be saying the word but have no idea what he's saying. I'll be sitting there like, "Yes! That's right! Just say it fast! You've got it—you've got all the sounds. That's right. But what word is it?"

(That particular example was from scripture study this evening. He read D&C 112:10, "Be thou humble; and the Lord thy God shall lead thee by the hand, and give thee answer to thy prayers." He read every word except 'answer,' 'prayers,' and, for whatever reason, 'hand' all on his own.)

Anyway, I had him help read bits and pieces of a couple of stories. We read a really cute one called Yo, Vikings, by Judy Schachner, which was a little hard for him, though he enjoyed listening to it (which is a big part of learning to be a reader as well). But then we got to It's Pumpkin Time! by Zoe Hall, which was perfect for him to read.

Our Zoë had decided to wander off to the bathroom for some reason, so while we were waiting for her he just read the front cover while the book was sitting in my lap.

"It's Pumpkin Time! By Zoe Hall," he read quite fluently.

"Good reading!" I said, quite shocked because we've honestly never read this story before, but when Zoë came back he proceeded to read the rest of the book to us pretty much all on his own, including words that he's never read before—like 'soil,' and 'guess,' and 'vines'—as well as many words that he's come across in his reading lessons and was already familiar with. I think he was using context from the pictures to help him figure out what the text was supposed to say. But that's all part of learning to read, too, and is totally legitimate.

For example, there's the sentence, "Then we drop in pumpkin seeds and cover them with soil."

He was beaming with pride when we got to the end of the book (and rightfully so), as was I.

I think he's just about convinced that he can, in fact, read. And even though I bribed him to behave during reading lessons (with the promise of a toy boat because he's sick of sharing our one boat with Zoë) I think he'll be happier with the reward of reading than anything else!
Posted by Nancy at 3:24 AM