A visit with Santa and chocolate tales

We meant to take the children to the Riverwoods yesterday so they could see Santa, but that ended up not working because we didn't end up finishing with dinner until 8:00 (which is when Santa turns in for the night). Some nights are like that. We made it out there, today, however, which was good because it was the last day to visit with Santa. It was also, perhaps, less than good because I think Santa was tired of seeing little kids after all of November and twenty-three days of December (he was not incredibly jolly)

You'd think we could have managed to squeeze in a visit before the very last day, but no. We waited until the bitter end. Andrew insists he works better under pressure, so.

Anyway, here's Andrew with the four oldest kids at the entrance (or at least one of the entrances): 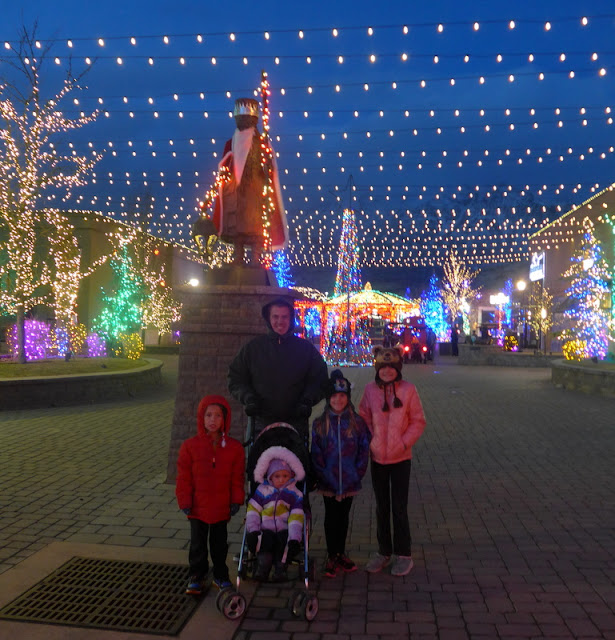 We thought it was funny that they'd dressed up the statue. Rachel and Miriam weren't very excited at the prospect of visiting Santa (they'd been hoping we were heading out to go ice skating) but they put on happy faces for the little ones who were pretty excited. 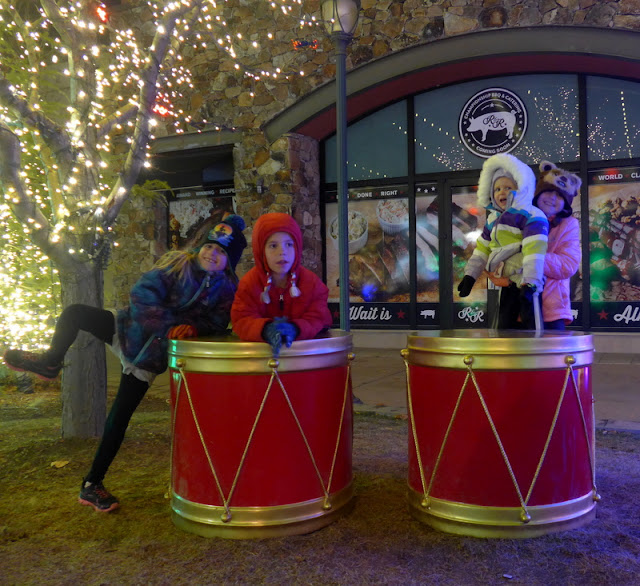 The line wasn't too terrible, and then we got in, posed with Santa, and breezed out. He wasn't very chatty and they had a two-picture limit (which seems almost cruel when you have to get five kids to look at the camera; perhaps a two-picture limit per kid).

This is a pretty good one of Zoë, who was thrilled to pieces to be meeting Santa Claus (but who wasn't about to sit on his lap, thank you very much), but Alex's doing...whatever that is: 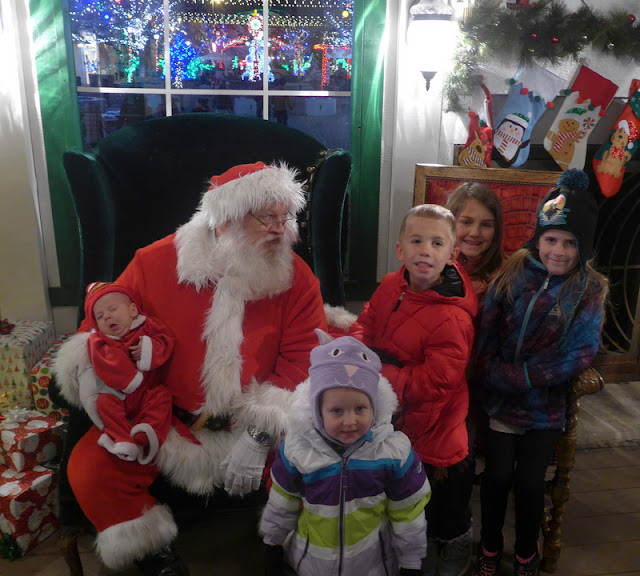 And this is a pretty good one of Benjamin, but the rest of them (you guys!): 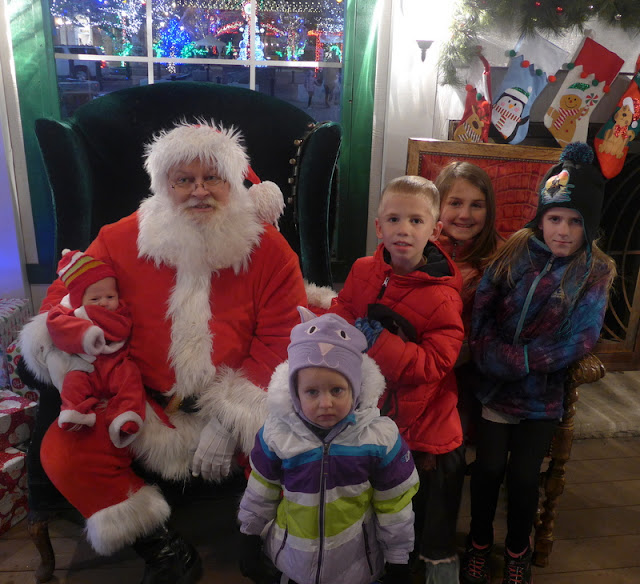 We sneaked in a few more than two pictures (because five kids; and seriously "Santa's helper" took more than two pictures of the family ahead of us and they only had one child so it was totally fair of us to sneak a couple extra shots, plus none of my kids wanted to sit on Santa's lap to chat so we hardly took any time at all). This one of Alexander and Santa turned out alright-ish: 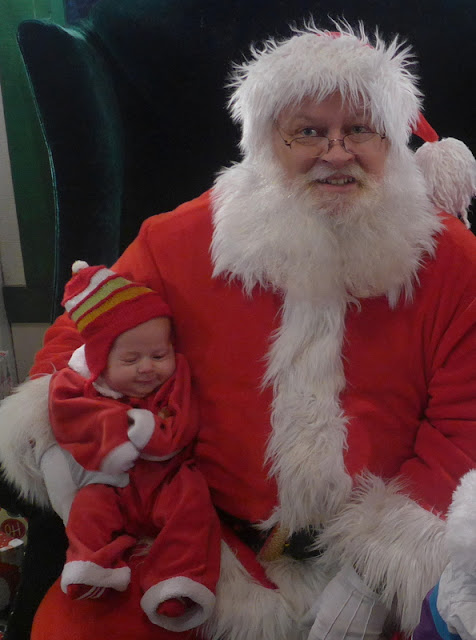 The whole time we were in Santa's little house, Zoë said nothing, was vehemently (yet silently) opposed to sitting on Santa's lap and remained rather stoic the whole time, but the minute we left she broke into a huge grin and said, "SANTA!" She chattered on and on about her visit with Santa for the rest of the night. "Santa really likes me," she told us. "And I really like him!"

Well, you could have fooled me!

Benjamin, on the other hand had more important things on his mind.

"The train! The train!" he reminded us, or at least me. Although we'd walked past it on our way to the line for Santa I had completely forgotten about it by the time we got through it. Must have been the excitement of meeting the old man that put it out of my head. 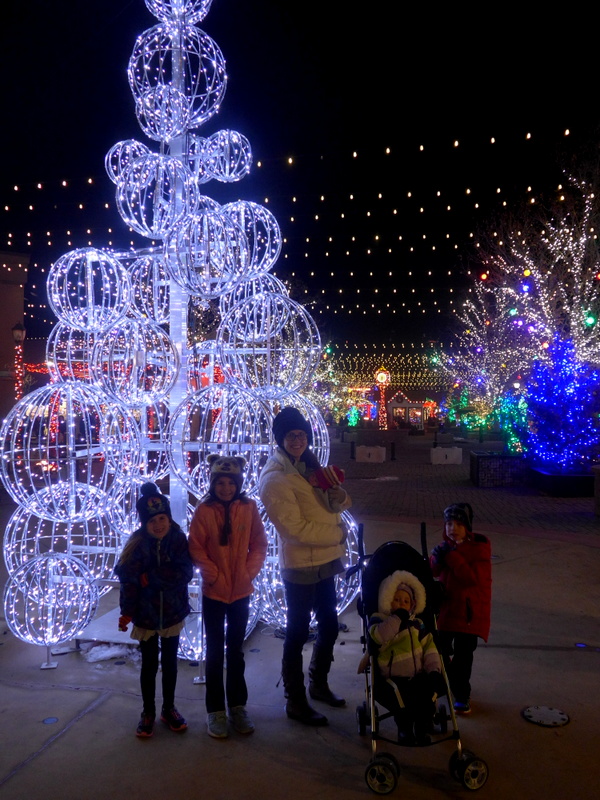 So we headed to the little train station to wait for our turn. There wasn't even a line! 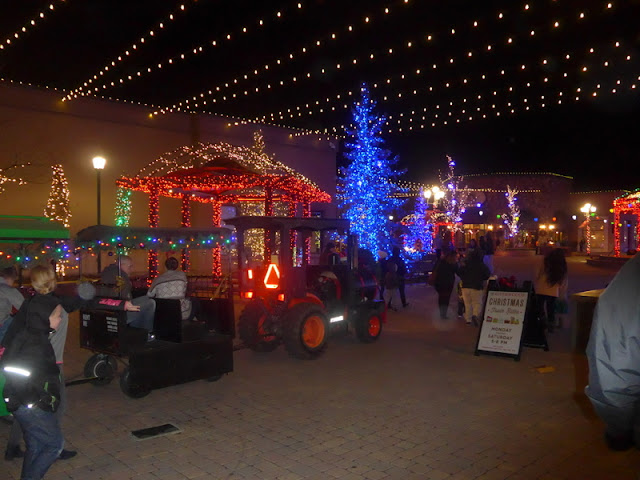 Andrew and Zoë sat in the back seat and I crowded into the middle seat with the four other kids. Andrew made fun of us for being so squished the whole time because he and Zoë had plenty of room and there was an empty bench in our cart. But it was cold so I was happy to squish into one row with four of my kids—what are kids for if not to keep you warm and cozy in the winter? 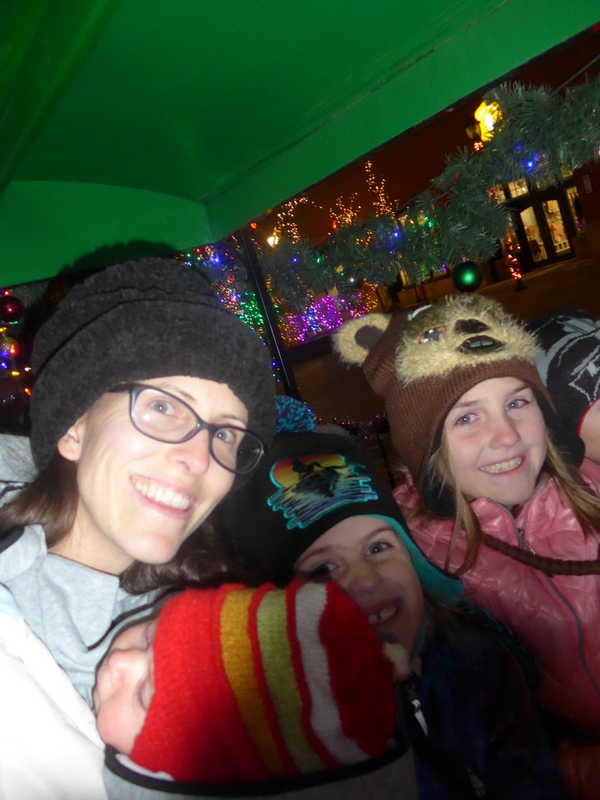 At home we took a few more pictures of our little Santa. My friend dropped by this outfit for him, and said, "It's going to be way too big but every baby needs to dress up as Santa at least once!" It is way too big, but I think Alexander pulled it off. The kids loved having him dress up as Santa.

Rachel loaned Alexander the Santa hat she got at choir last year. Like the suit, it's way too big for him but we made it work. He's just the cutest little thing! 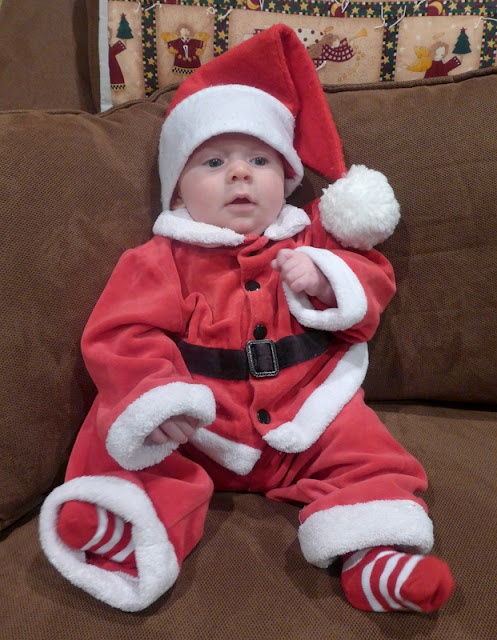 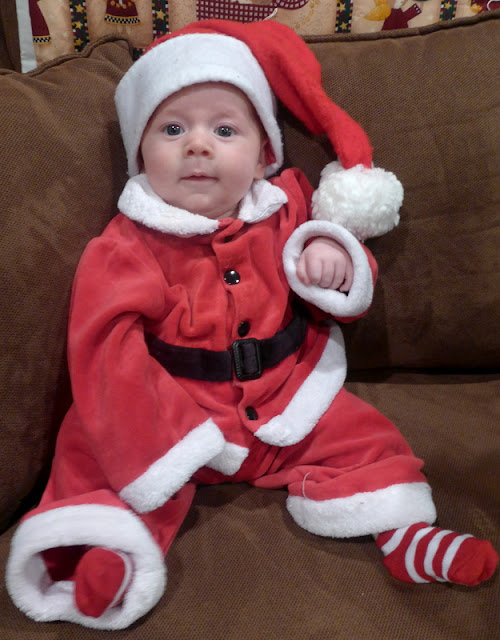 And then we had to also take a picture with our other Santa hat (that the three middle kids have been fighting over since the Christmas decorations came out):

Speaking of needing, Benjamin learned about needs and wants in school this month. We need food, water, shelter, air, and clothing. Everything else is just stuff we want.

The other day we were walking home from school (in the cold) and Benjamin said, "I need hot chocolate!"

"Fine," he said. "But I'm so cold all over that it will just do my body good to get some warm stuff inside of it."

I don't let him have hot chocolate every time we walk home from school in the cold, but I do believe that I let him have some on this particular day...and I believe this was the same day that he spilled his entire mug on the table...and then ran and grabbed one of Grandma's holiday towels to mop it up with...and I'm really not sure the chocolate colouring is ever going to come out. But Grandma's in Mexico right now so what she doesn't know won't hurt her...unless she reads this blog, which she will.

I'm sorry I ruined your life and crammed 11 cookies into the VCR spawned a hot-chocolate-spilling, holiday-towel-staining sweetheart.

Perhaps a funny story about Andrew will make up for the towel.

He was still feeling chilly from our excursion after we'd wrangled all the children off to bed and he's still grading final projects (finals are always going to be a huge part of our holidays, aren't they?) so he settled his professorial self into the chair by the fireplace to get to work and warm up. But first he grabbed a potpourri of holiday chocolates—an Andes mint and a caramel-filled one and a couple of Kisses—and stuck them in his sweater pocket to snack on while he worked.

This was a fine and festive, though poorly thought out, plan.

Andrew got so invested in grading assignments that he forgot about his chocolate, so it sat getting lonely (and rather melty) in his pocket by that warm, warm fire.

Soon he came upstairs with a sheepish look on his face and he told me of his plan to combine chocolate, grading, and cozy fires.

"So...is there chocolate all over the inside of your pocket now?" I asked.

He hung his head and pulled out his pockets to show me the mess.

"Oh, wow," I said. His pocket was covered in ooey, gooey chocolate.

"That's not even the best part," he said.

"Are you three?!" I laughed (as quietly as possible because I was trying to get the baby to sleep).

Andrew laughed along with me, popped in a load of chocolate laundry (we let the towel go for another run with his sweater), and spent several minutes wiping chocolate off his phone with a baby wipe and picking chocolate out of a few crevices with a toothpick. It still works; it just may be residually sticky for a while.

How about one more chocolate story to round things out?

We had a late lunch so we didn't feed the kids dinner before we left to go see Santa. They were all pretty hangry by the time we were packing up to leave.

"Everyone name their favourite quick and easy dinner!" Andrew said once we'd all gotten into the van (which takes some doing with five kids).

"Grilled cheese!" we heard from the back. "Cereal!"

"How about cream of wheat?" Andrew suggested. "It'll warm us all up!"

"Okay, we'll have cream of wheat and hot chocolate."

"Okay, we'll have hot chocolate and cream of wheat."

Once home, Andrew set to work boiling water for cream of wheat (and hot chocolate!) while I fed Alexander (who always thinks he's famished). Soon we gathered around the table, steaming bowls of gruel in front of us, to give thanks.

"Rachel, will you say the prayer?" Andrew said.

She always says this. Sometimes we remind her that other people need a chance to pray. Other times we just give into her wishes because she's two (and can be a bit of a monster). Today was definitely a give-in day.

"Dear Heavenly Father," Zoë began, then she waited to be prompted because she still needs some help.

"We're thankful we could visit Santa."

"Please bless the hot chocolate. In the name of Jesus Christ, THE END!"

All she had for dinner was hot chocolate, so she sure showed us. We tried to get her to eat something else (the cream of wheat, leftover pizza, an orange, anything) but she wasn't about to consume anything other than hot chocolate (perhaps because technically nothing else had been blessed). Even after she finished drinking her hot chocolate and we told her that she absolutely could not have seconds of it unless she ate some actual dinner, she wouldn't give in.

Instead she insisted that she was full and willingly chose to leave the table and get ready for bed.

I have a feeling she's going to be very hungry when she wakes up in the morning.
Posted by Nancy at 2:06 AM