I'm still a week behind, it seems, so I very well may never catch up. We had a quiet day at my mom's house today because Benjamin was running a fever (I'm really hoping it's only because he's teething) so I suppose having little to tell about today will help me catch up overall.

We last left you at the Bean Museum and I wondered what else we'd done that day (last Friday). We went home and made dinner and waited for Andrew and Rachel to drive down after their movie. I was following their progress on my phone and noticed that although Andrew's little dot was moving closer to my little dot, his estimated time of arrival kept getting later and later.

"They probably hit some traffic," I said, right as the phone rang. It was Andrew. "Hello?"

"Hey--we hit some traffic. You should just eat dinner without us. Maybe we'll meet you there if we're stuck too long. I'll let you know what we decide to do."

Our plan was to go to the Riverwoods Shopping Center to visit Santa Claus. Benjamin has been dying to meet him because he "uvs" Santa and Santa "uvs" him and he's going to come to his house and bring him "prezzies" and it was all so very exciting. It was also rather warm, so we didn't mind meeting Santa at an outdoor plaza.

We didn't ever hear back from Andrew and Rachel though, so I pulled out my phone to see where they were just in time to see their dot collide with mine.

"They must be here," I said, and someone went to the door to let them in. Rachel ate some quick dinner (Andrew was too full of movie theater popcorn to eat) and then we left.

Riverwoods was pretty crowded but the lines moved relatively quickly. Benjamin was so, so excited the whole time we were waiting for Santa. He could hardly contain himself. But when we got up there he, of course, chickened out and had to sit on my lap instead of Santa's. 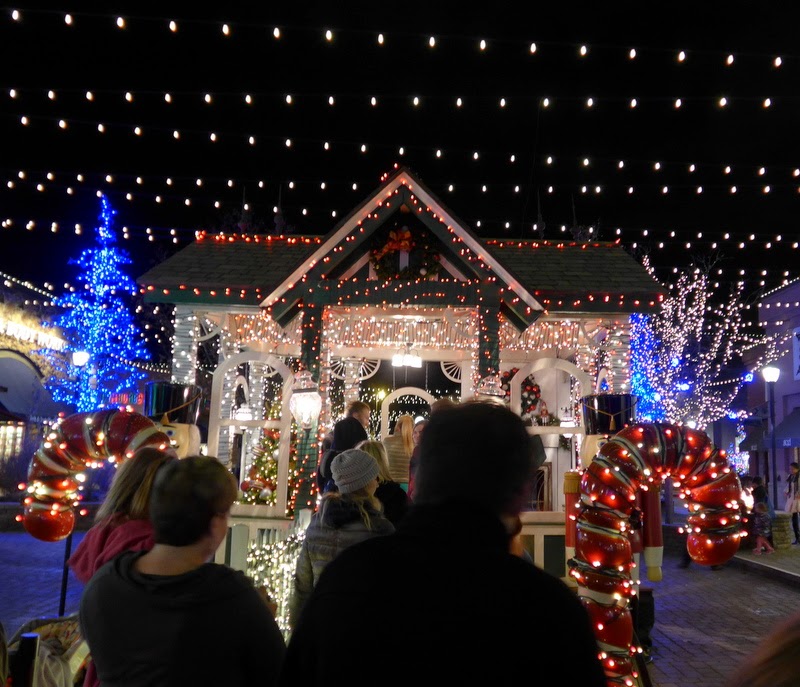 Santa looked a bit of a character. He had peppermint-swirl earrings. 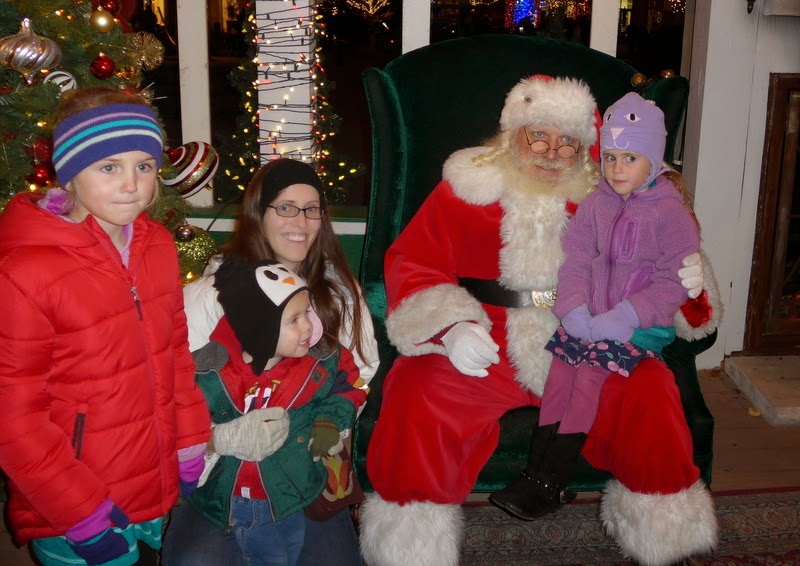 Santa asked the kids what they wanted and I listened in intently even though we were pretty well finished Christmas shopping at that point.

Rachel said she wanted books and origami paper. Miriam asked for more princess dolls. Benjamin said he wanted presents ("prezzies"). That is the beauty of children who never see actual commercials. They have no idea what's out there. 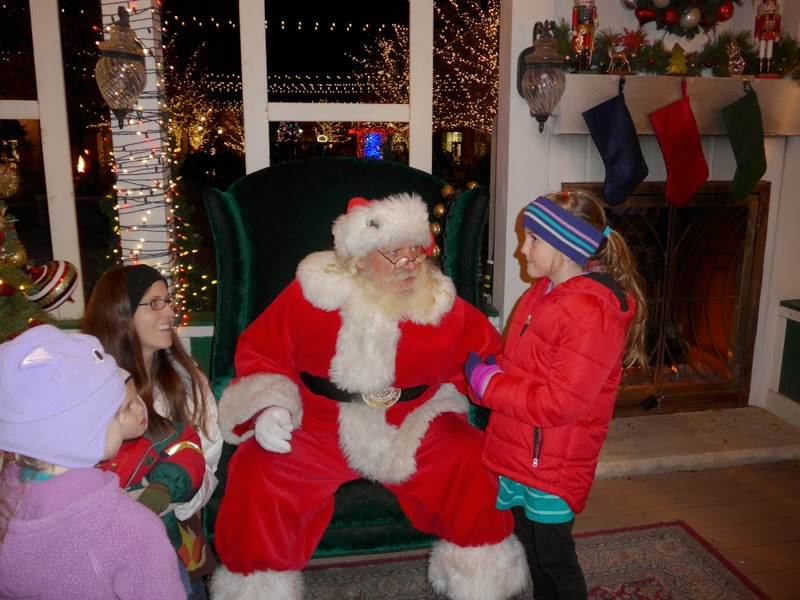 When Rachel brought home her list from school she had on there (besides books, origami paper, and a soccer ball) "rubber bands" with "for fights with Dad" erased. We thought that was a pretty humorous request...but she ended up with a rubber band ball from Santa and was awfully excited about it.

As we were leaving Santa's little hut Benjamin called out over my shoulder, "Oh, 'ook! Santa! Me uvs Santa!"

He got over his shyness just a minute too late.

Since it was so warm we decided we could also wait in line for the carriage ride. 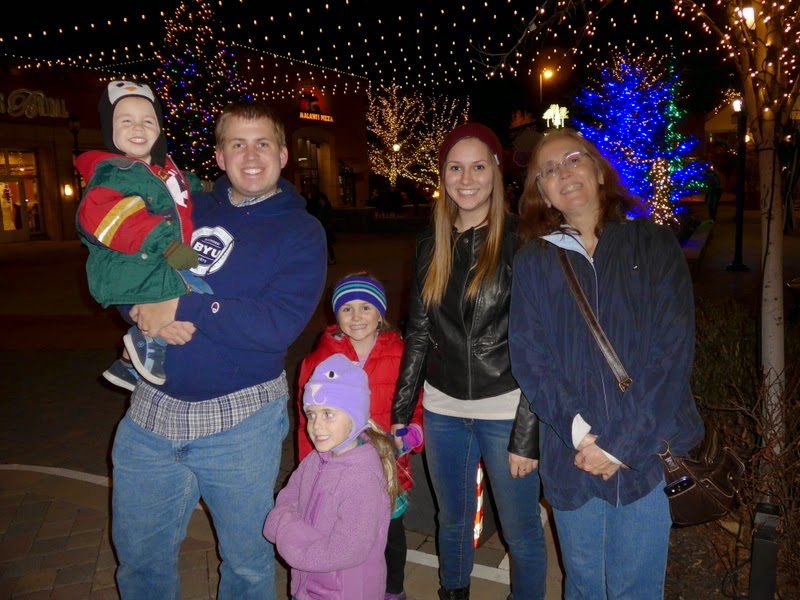 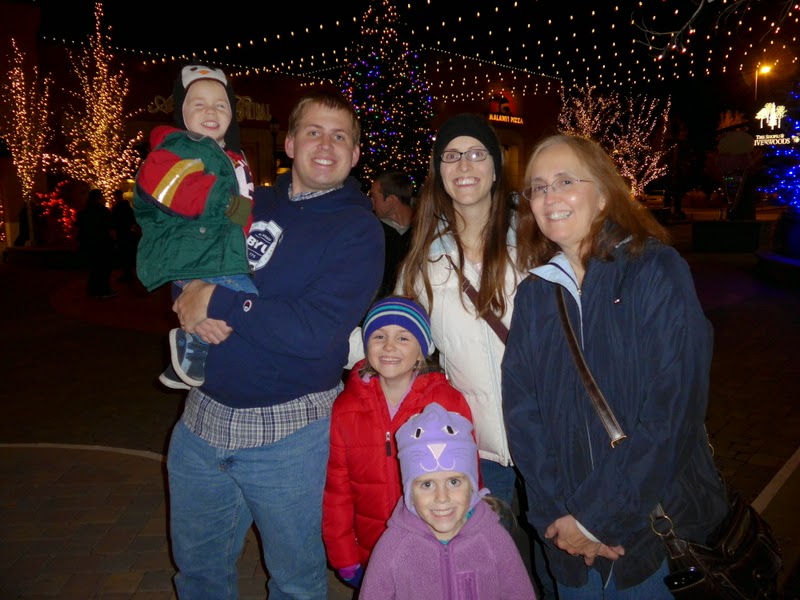 
"Santa!" Benjamin squealed, pointing at the driver. "Nuzzy [another] Santa!"

The driver turned, winked at me, and drawled to Benjamin, "You callin' me fat?" 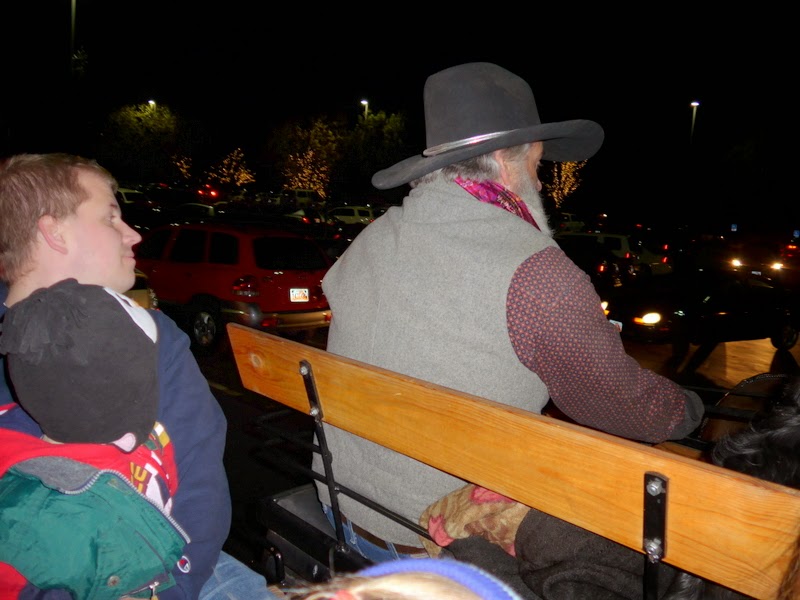 He took us for a brisk stroll around the Riverwoods parking lot. We learned he was from Alabama and was hungry enough to eat chitterlings.

"But I bet no one here knows what those are!" he said. "You ever hear of chitterlings?"

"Actually, we have," we answered.

"Well, where are you from?" the driver asked. "Can't be from around here!"

"Uh-huh! Then you'd know what chitterlings are alright!"

Not that we'd ever eat them on purpose.

It was a fun--and not too cold--evening. And as an added bonus we ran into Lacy née Nay and her new husband! It's also fun to see Josie embracing aunthood. She's been an aunt her entire life--since before she was even born--but is just starting to enjoy having enough of an age gap between her nieces and nephews and herself to enjoy it. I guess there's a different feeling to being an aunt at age 20 to being an aunt at age 3. 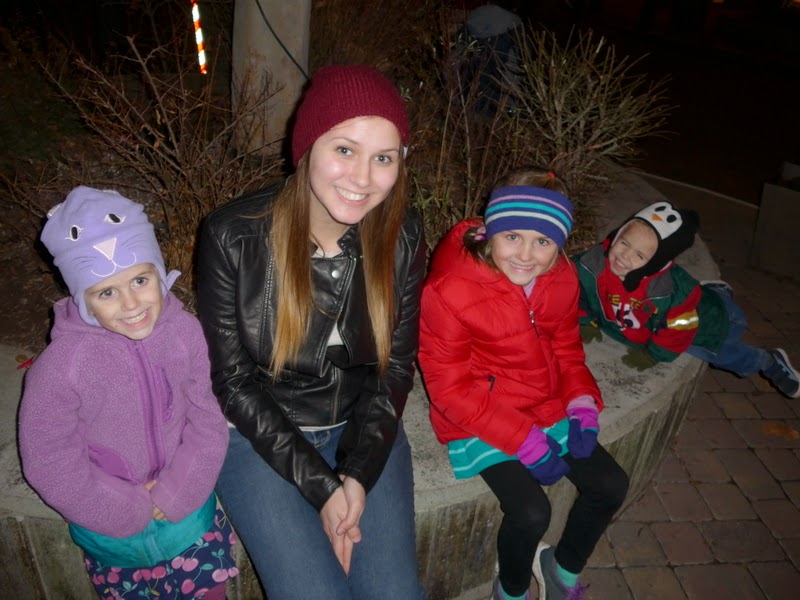 We once lost Josie at my grandpa's funeral (or was it grandma's?) because we'd accidentally sent her off to play with "great-grandkids" while the grandchildren rehearsed a musical number. We kept counting cousins and coming up one short--and then we realized that it was Josie we were missing! 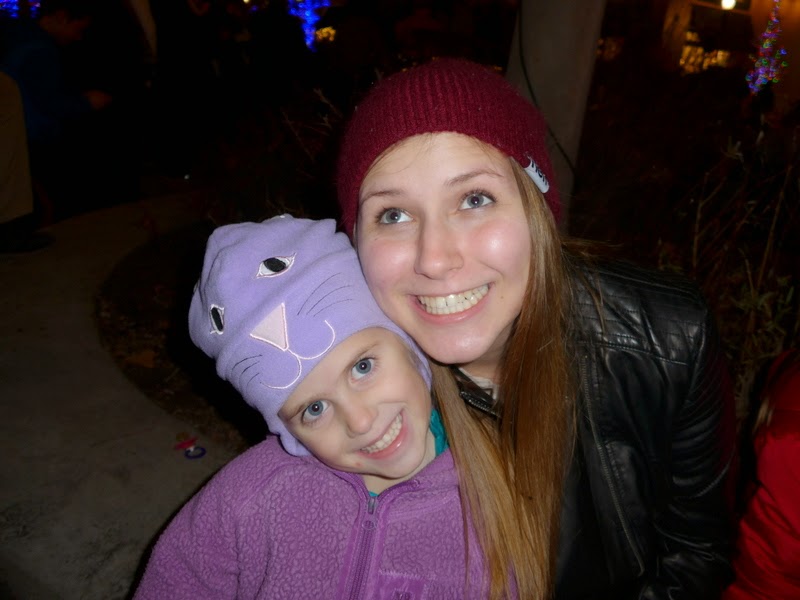 Although she still hasn't gained many years on the older nieces and nephews, she's definitely older than my kids and it's fun to see her enjoying her role.
Posted by Nancy at 12:03 AM